Amazon’s Fire-based televisions have, historically, been solid budget televisions. That’s great if you’re looking to save a lot of money, but sometimes you want to get a lot of bang for your buck. That’s the aim of the Toshiba 65-inch UHD 4K M550 Fire TV, which offers many premium features at a price that’s not super-premium.

Toshiba was kind enough to send SPY a unit to test out, and our product testers have been seriously impressed. For a full download on our experience with this new smart TV, read on for our in-depth Toshiba M550 Fire TV review below. In addition, we have new details on an early Prime Day TV deal that lets you save up to 56% on these new Toshiba TVs. It’s a seriously insane discount.

Prime Exclusive Deal: Save Up to 56% Off

These deals are only for Amazon Prime members, but it doesn’t include two-day shipping. This price doesn’t include expert installation, but you can add that in for another $150. This deal is good for 21 days and ends on July 13, 2022. 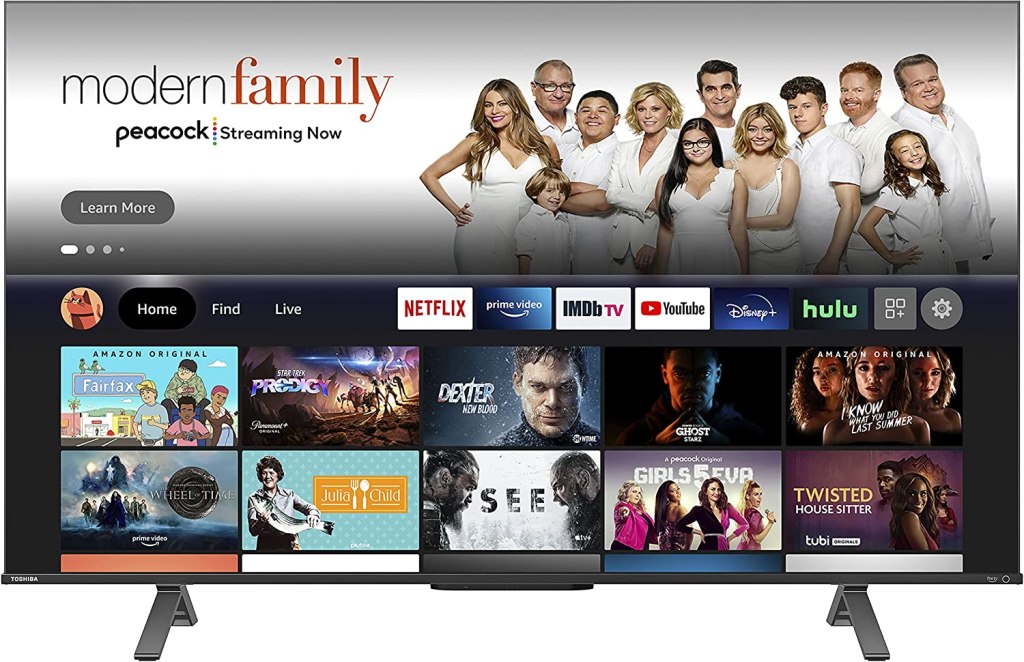 The TV setup moves pretty quickly after unboxing the M550 (which can take about 30-40 minutes or so). Upon booting up the unit, you’ll have an option to connect the TV to your Amazon account; I already had a Fire Stick, so when I entered my email, the Fire TV just pulled all my existing downloaded apps and settings over the M550. I did have to go through and re-authenticate individual apps (i.e., Netflix, Disney+, HBO Max, etc.), but the entire soup to nuts process took no longer than about 20 minutes, which I feel to be pretty quick. 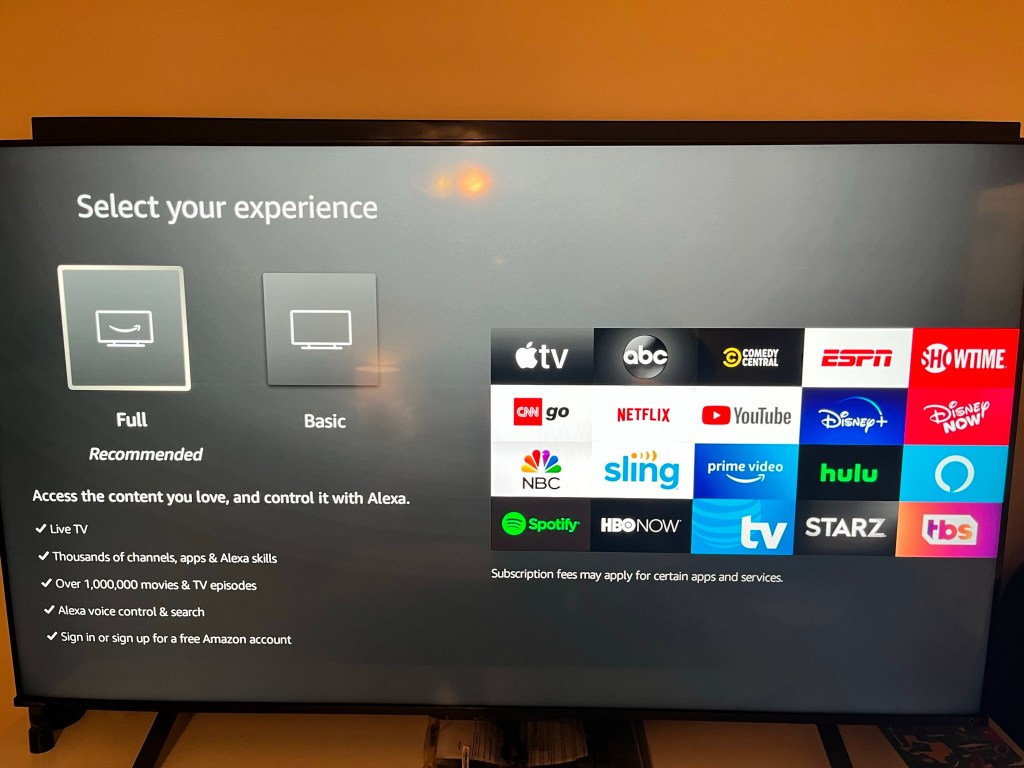 The overall design is pretty similar to most standard 4K TVs on the market nowadays; there’s nothing that will make the TV stand out (in a good or bad way), which I view to be a good thing. You want something like this to sort of melt into your home environment without much fuss; the bezels are hardly visible, making it feel like the unit is almost frameless. There’s just enough to grip the TV when you’re moving it around. It protrudes slightly from the back due to an extension where all of the inputs are but is still pretty thin overall. Plus, that extension allows you to leverage its VESA wall-mount-ready ability.

The full suite of features in the M550 is pretty hefty, and most of them come from the benefit of having Amazon’s Fire TV user interface. If you’ve used a Fire Stick before, it’s pretty much the same thing; upon powering up the TV, you’ll scroll through Fire TV’s title-like interface to find the content you’re looking for, and you can download relevant apps to stream the content you want. You won’t need to download any of Amazon’s apps, like Prime Video, because it’s already included, so that means your favorite Amazon shows like The Boys or Marvelous Ms. Masiel will already be there for you. The Fire interface is pretty easy to use and becomes even more so when you can use the Amazon Alexa-enabled remote to use voice commands to search for and play a show or movie. Additionally, the M550 includes 16 GB of onboard memory for anything you could want, from family photos to home videos.

Regarding display features, the M550 isn’t a slouch either. The 120Hz panel supports auto low latency mode to help with gaming (more on that in a bit). Other display features like UIltra Essential PQ and Dobly Vision further enhance the overall picture quality.

As for that screen, those features provide a stunning vivid display. Visual feasts like Spider-Man: Into the Spider-Verse popped with striking and colorful clarity. Older movies like Criterion’s 4K restoration of Citizen Kane shined when played via a Blu-Ray player. Even streaming shows like the newest season of the previously mentioned The Boys had fantastic depth and clarity. If you’re looking for a great 4K TV for streaming and watching media, the M550 impresses. The built-in sound of the M550 is also pretty sturdy.

On the gaming side, the M550 works well but could be better. The panel doesn’t offer any variable refresh rate, which would be extremely helpful for diehard gamers. That said, I will say that Horizon Forbidden West looked just as impressive on the M550 as it did on the super gamer-friendly Hisense, even if it doesn’t have as many high-end features. 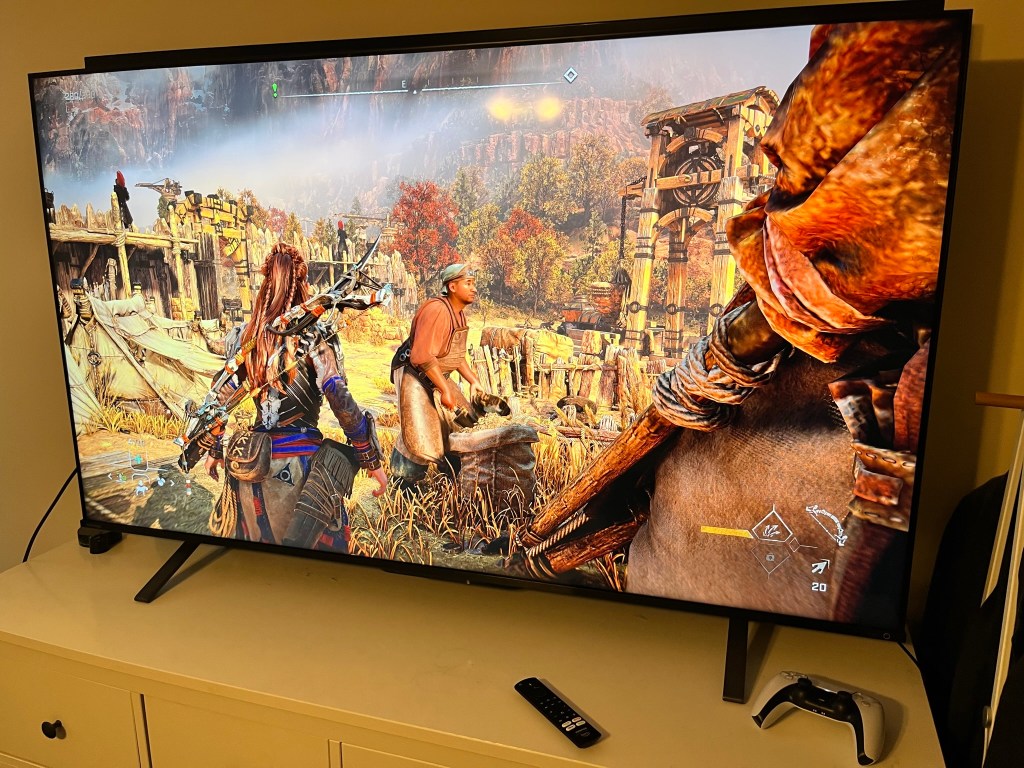 I did have a few minor quibbles with the M550; the viewing angles are a little more narrow than I’d like from a unit this size and price. Likewise, the TV sometimes reverted to motion smoothing when watching content (not a dealbreaker, but undoubtedly annoying). However, the most frustrating thing for me was how slow the Fire TV UI happened to be. This is also an issue I’ve had using other Amazon Fire products; it’s an especially stark contrast when compared to the Google TV interface I’ve used on other units which is super response and snappy. This isn’t a dealbreaker, but just takes extra time when you’re first booting up the unit.

The Toshiba 65-inch UHD 4K M550 Fire TV is a great TV for streaming and watching movies, especially if you can get it on sale (it drops down to around $500 pretty frequently, so there’s a likely chance you’ll get it for that price). It leaves a little bit to be desired when it comes to gaming, but not enough to make it a deal-breaker.

If you’ve yet to jump into the 4K era, absolutely. It’s a fantastic entry-level 4K unit that offers a lot of fantastic value. 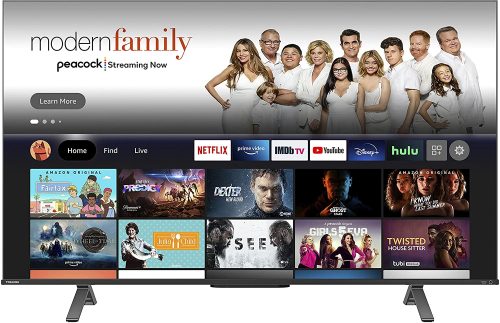