You might be thinking, “why would I buy an underwater camera when my phone is waterproof?” Sure, new Samsung and iPhones are waterproof, but only for a limited amount of time and neither is meant to be submerged in deep water. Plus, you’d probably never forgive yourself if you dropped your new phone into the bottom of the ocean.

Underwater cameras are specifically designed for diving and snorkeling and are far more rugged than your phone. Many underwater cameras can be submerged under 45 feet of water, operate under freezing temperatures and withstands five-foot drops without any damage. Their lenses and aperture are also designed to take in as much light as possible and form crisp underwater pictures that are just as detailed as the above water. And nothing puts your adventurous side on display for your social media or Tinder profile like capturing awesome photos of you swimming with fish.

As much as you probably want to take your phone on the beach or near the ocean to capture all those social media-worthy moments, you’ll be much better off using an underwater camera for those photos instead. This keeps your $1,000+ phone safe, and you can get as adventurous as you want and capture all those great moments. It’s time to get a camera that loves the water as much as you do.

Below are our recommendations for the best underwater camera.

Your secret weapon for snorkeling is the Olympus Tough TG-6, which is waterproof to 50 feet and can go even deeper with the additional case. You can capture schools of fish in slow-mo in 120 fps, 1080p video. Snap close-ups thanks to the 4x optical zoom and the Olympus TruPic VIII image processor which creates incredibly sharp underwater images from the 12-megapixel sensor. Make sure this underwater camera is in your travel bag on your next tropical vacation. 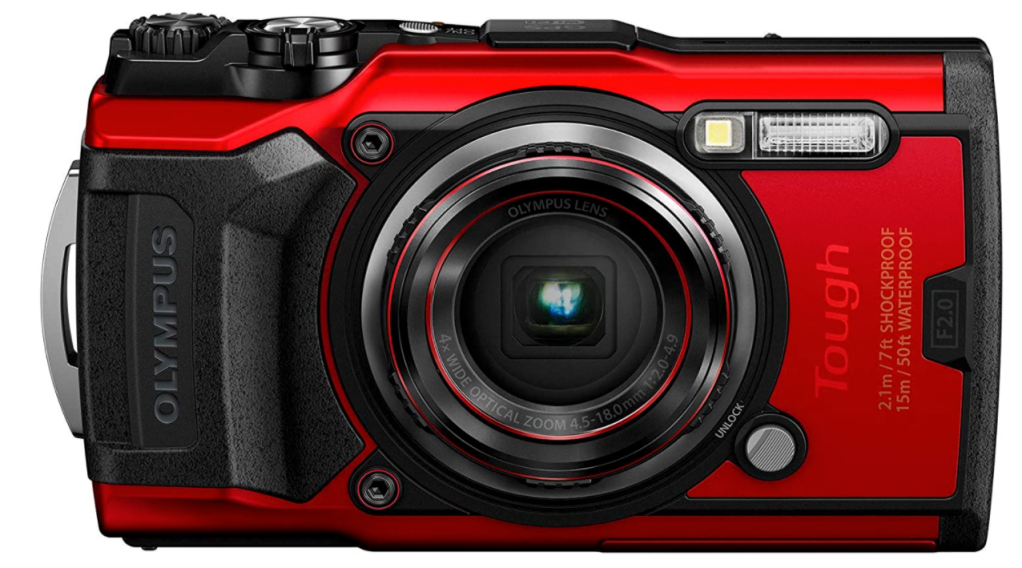 The Hero9 features a front-facing screen, which is great when you are vlogging your snorkeling or diving session since you can actually see what you’re capturing. It also features improved stabilization over its predecessor, along with 5K video. Plus, you can grab stills from the video for those frame-worthy moments. It’s a little bit of a bigger and heavier action camera, and it’s pricey, but all that new tech is worth the extra weight and cost. 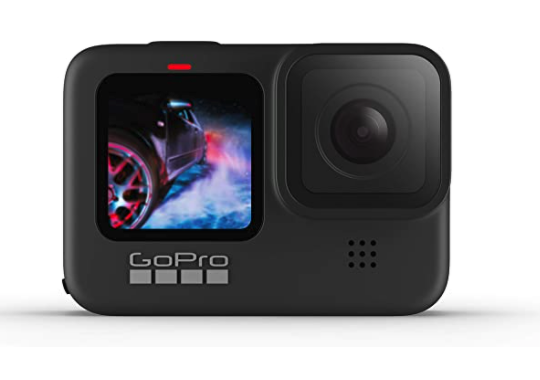 Although it’s the previous generation, the Hero8 is still an incredible action cam, and a great choice for an underwater camera. It is waterproof up to 10 meters and can capture smooth 4K video at 60fps. When you’re out of the water, the built-in flip-out stand can serve as a tripod in a pinch. It doesn’t have a front-facing screen like the Hero9, but now that the Hero9 is out, the Hero8’s price has taken a dip, which is great for you. 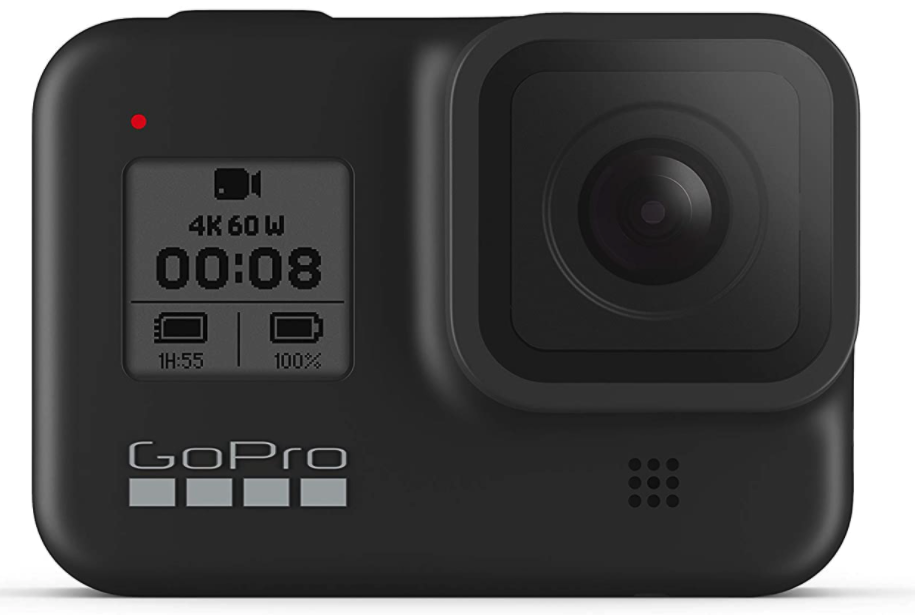 The front-facing display is great for vloggers to get the best take possible in the shortest amount of time. Plus, it’s pretty cool to see what you look like while you’re hiking, skiing or filming underwater. Speaking of water, the Osmo Action cam can handle going underwater up to 11 meters without damage. And beyond taking awesome 4K video at 60fps (same as the Hero8), it can also take 12MP stills as well. 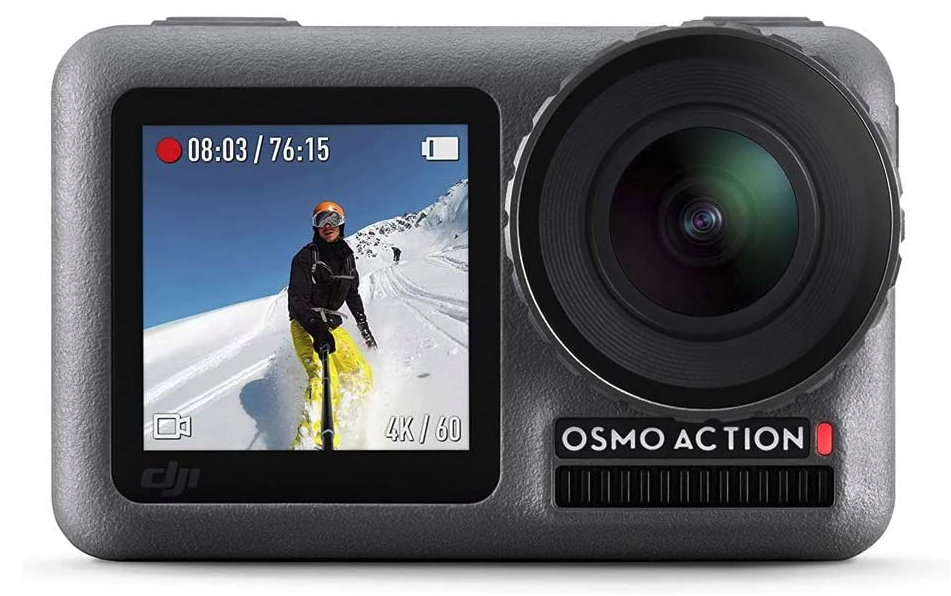 Accidents are bound to happen when you live an active life, and the OSMO Protective Housing may save that $200 dollar action cam from becoming a paperweight. There aren’t nearly as many accessories for the Osmo camera compared to GoPros, but the OSMO Housing can add valuable protection to your underwater camera. This can serve as extra protection for when your camera slips or comes unclipped while you’re diving, snowboarding, biking or whatever. It’s a good investment to keep that camera rolling. 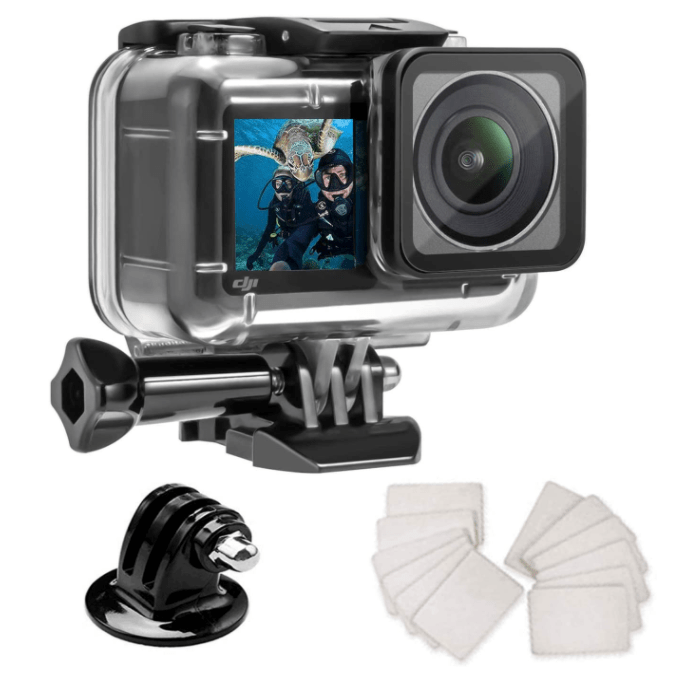 Don’t let the “budget” tag scare you away, especially when you consider the ability to go 82 feet underwater without issue and withstand drops up from six feet. It has a 16MP sensor and a 5x optical zoom to get up close and personal with underwater life. It does have the ability to take 4K video, but at a slow 15fps frame rate, making the video quality look more like buffering video than a smooth one. When you’re all done in the water, you can quickly transfer your photos via Bluetooth. Not bad for under $200. 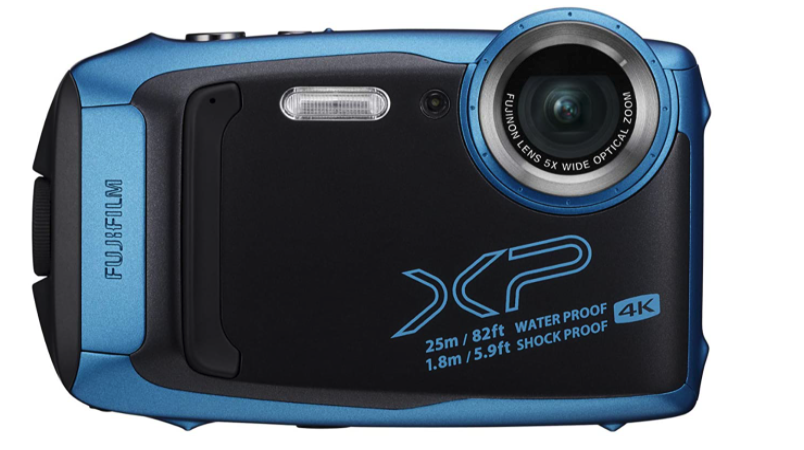 Depending on your needs, this could easily be the best underwater camera for you. It goes deeper than the Olympus Tough TG-6 — down to 100 feet — and has 5x zoom, a little better than the Olympus in that category as well. That being said, it’s aperture isn’t as great and lets in less light, resulting in less vibrant underwater pictures as the TG-6. And it doesn’t take RAW file format pictures, so you’re out of luck there, too. If you’re cool with JPEGs and prefer deeper diving capabilities, this is a stellar underwater camera option. 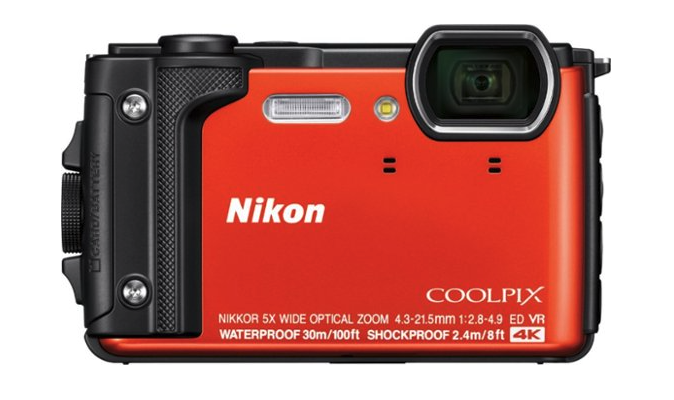 Most flagship smartphones are waterproof to some degree, but would you feel comfortable diving with your $1000 phone? With the ALCase Waterproof Housing, you can. Your phone’s camera is awesome, and in the housing, you can take amazing underwater pictures and keep your phone safe. It has a nice big grip and a shutter button to make taking photos underwater safer and easier. 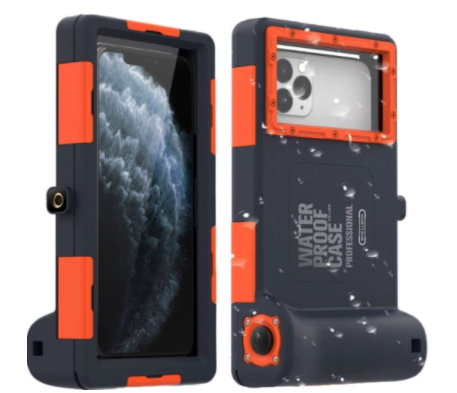 This diving rig will make it much easier and safer to get the best footage and pictures possible with your action cam. The big hand grips make your camera much easier to hold underwater and the wrist straps ensure that even if you happen to lose grip, your camera or the rig won’t drop to the seafloor. This is a must-have for divers whose underwater camera of choice is a GoPro or Osmo action cam. 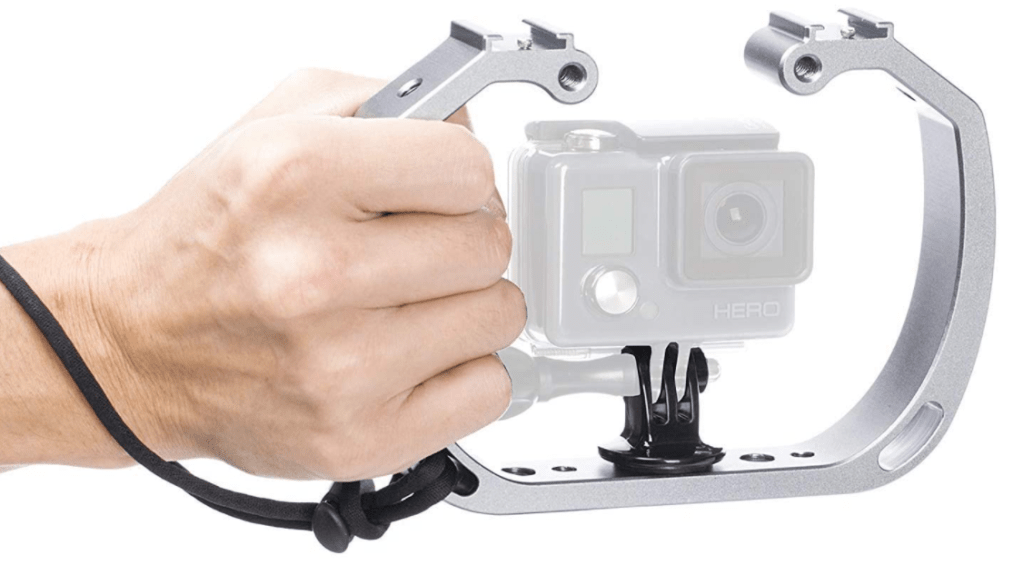 The awesome thing about GoPros is that when new ones come out, the older ones get cheaper. And the Hero7, although a few years old now, is still one of the best action cams around. It handles diving up to 10 meters underwater and features built-in image stabilization that changed the game. And like its successors, it shoots 4K video at 60fps and takes 12MP stills. See, not bad for an old fella, eh? 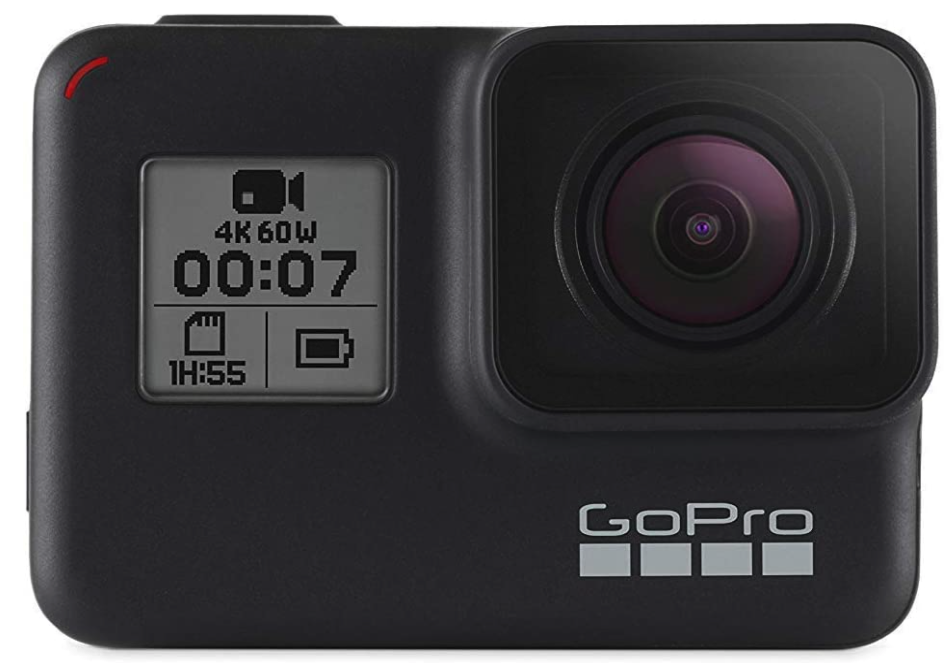 When you really want to get creative with the footage you are capturing, the GoPro Max is the ticket. With a camera on both the front and the rear, the camera captures footage from all angles and in post-production, you can create some really cool visual effects. It’s a little bit of a specialized endeavor and you will need some post video footage editing skills to fully take advantage, but it can take your biking, hiking and diving footage up a notch. 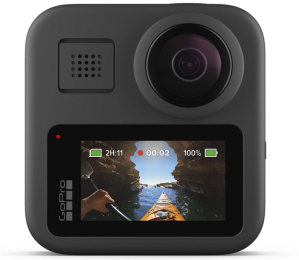 With dual cameras, you can switch from having a classic action camera to the Insta360 capturing sweet 360-degree footage for an awesome visual experience. It’s waterproof up to 16 feet of water, which isn’t the most waterproof camera in our recommendations, but plenty for snorkeling or kayaking excursions. And hardcore photographers will appreciate this camera’s ability to deliver RAW file formats. 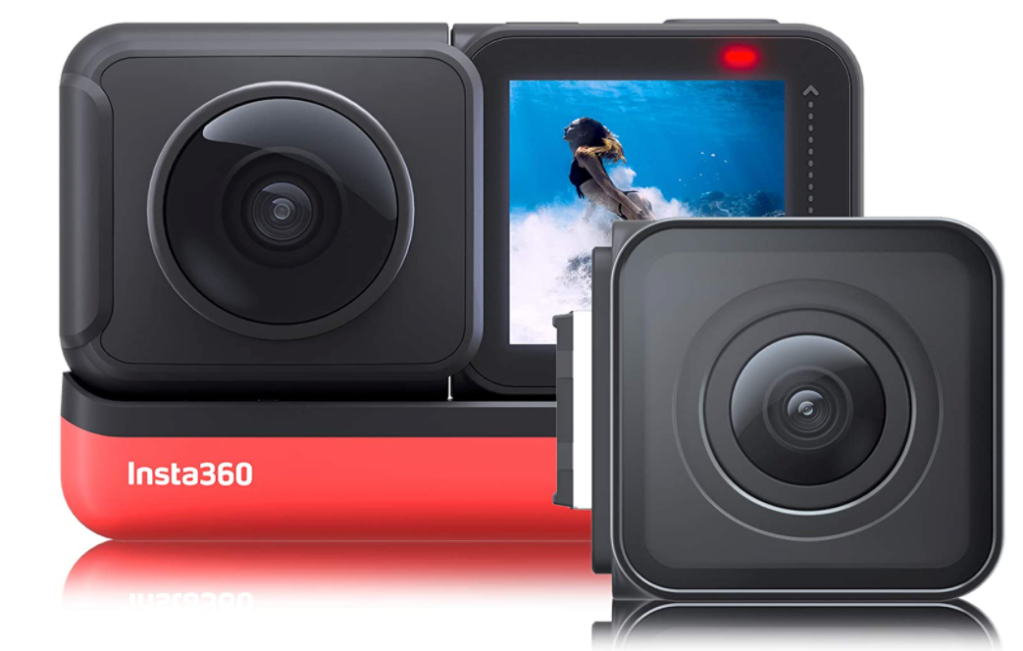 Filming at an incredible 1,000 fps, the Sony RX0 Mark II can capture true slo-mo video. Think about how awesome capturing a school of fish or that epic dive into the water will be in slow-mo. Beyond being waterproof up to 10 meters and having slo-mo video capabilities, this underwater camera takes awesome 15.3MP stills and can capture great footage even when the lighting isn’t ideal. It’s pricier than most underwater cameras, but the extras are pretty sweet if we do say so ourselves. 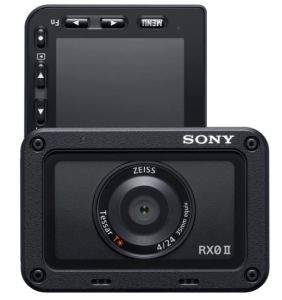 The Akaso Brave 4 is a solid alternative to the likes of Olympia, GoPro and Osmo underwater cameras. It’s under $150 but has the underwater prowess to handle going down 42 meters as well as taking 4K video at 30fps and snapping 20MP photos. Plus the large display on the back comes in handy when you are capturing your diving, riding or running footage. 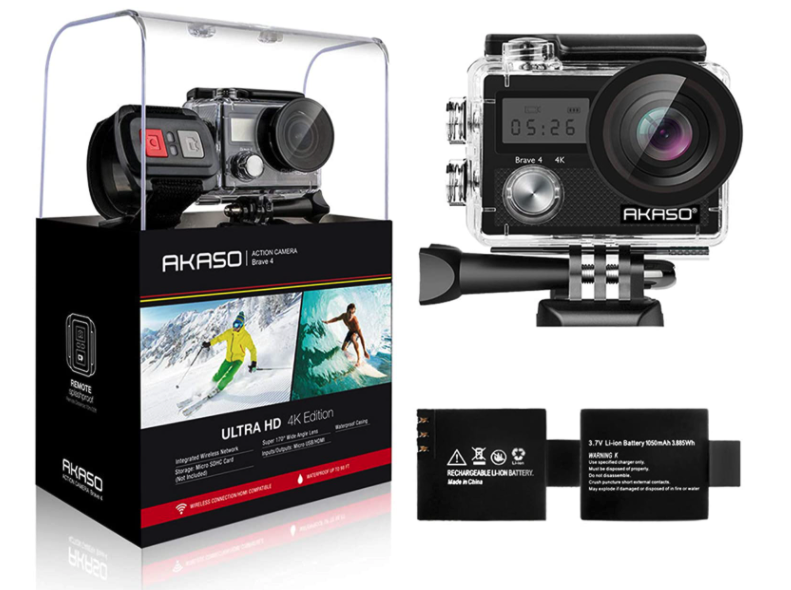 Built like a tank, the Ricoh WG-70 not only handles being submerged 45 feet underwater but also drops from 5.2 feet and freezing 14-degree temperatures. While you’re underwater, the macro light ring illuminates your surroundings to help you see better but also works to light up the subject for better pictures. Speaking of better pictures, the Night mode takes several images and blends them together (much like HDR on your iPhone) for the best image possible. The Ricoh WG-70 is up for your adventure regardless of how cold or rugged. 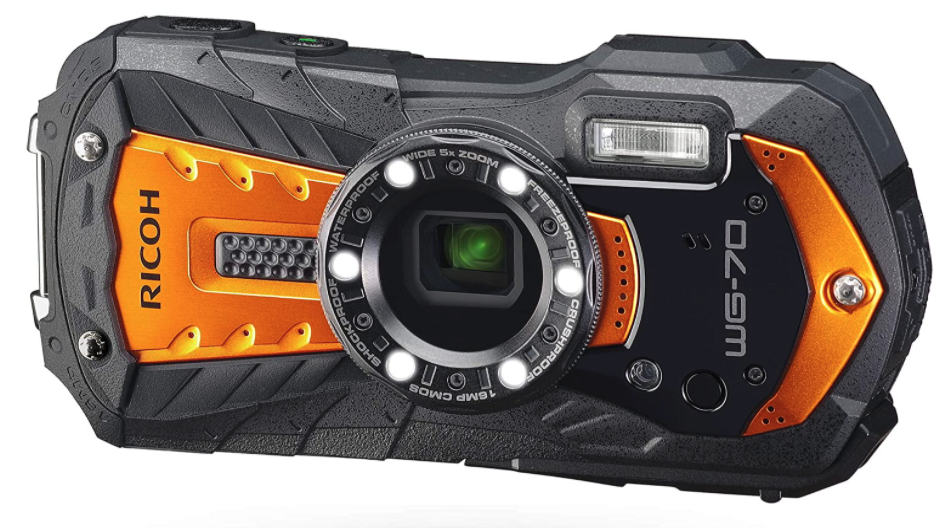 We get it, buying a piece of hardware specifically for underwater-use when you might only use it once is difficult to justify. A great solution for a one-off water-based trip is the Fujifilm Quick Snap. It’s a disposable camera, so you can capture all of those underwater moments without having to spend hundreds on a camera that is capable. It can handle going under 17 feet of water, making it a great snorkeling companion, and if you accidentally drop it to the bottom of the ocean, it’s only a $10 investment. These cameras have been discontinued by Fujifilm, but are currently available on Amazon while supply lasts. 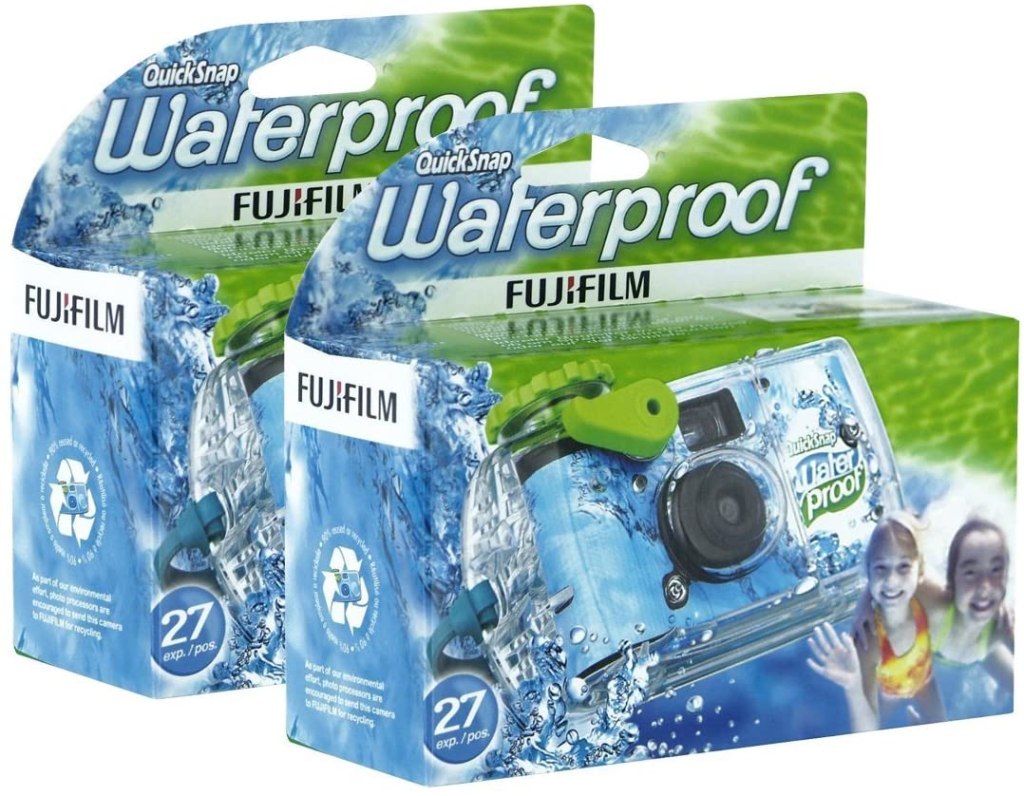 photographers far and wide: here are the 7 mirrorless cameras you need to up your photo game