Apple Watches have always been the premier smartwatches; however, with the release of the Series 6, Apple is really just showing off at this point. The latest wearable from Apple puts other smartwatches to shame, as it’s incredibly powerful and stylish, with advanced features like blood oxygen monitoring. As one of the hottest tech gadgets of 2021, is it possible to find Apple Watch deals? After all, the brand is known for hosting very few sales and discounts.

Fortunately, you can find Apple watch deals, including deals on the Series 6. Plus, now that there are a number of generations of this smartwatch for sale, you can find a variety of discounted models no matter your price point.

To help out our readers, we went looking for the best deals on Apple Watches at popular retailers such as Amazon and Best Buy. We’ve found deals on the New Apple Watch Series 6, SE, Series 5 and Series 3 watches that help you score the stylish wearable that you’ve always wanted, but at a price that’s easier on your wallet.

Of course, the Series 6 models have the fastest components and best battery life, while the Series 3 is available at an entry-level price point starting at $199. That being said, all of the watches support the newest watchOS7, so regardless of what model you find below, you can enjoy the benefits of sleep tracking, better fitness features and even hand-washing detection (what a time to be alive!).

It’s time to get the best tech around your wrist. And now you can save some bucks with the great Apple Watch deals below:

The newest Apple Watch, the Series 6m, starts at $399 for the 40mm and $429 for the 44mm watch face. These watches have the most updated features, including the ability to monitor your blood oxygen levels, better battery life and components up to 20% faster than the Series 5 watch.

SPY editors named the Apple Watch Series 6 one of the top tech gifts of 2020. Of course, as the newest model, it’s harder to find Apple watch deals for the Series 6. Even so, you can find some worthwhile discounts.

As a baseline, you can currently buy the Apple Watch Series 6 40mm watch at the official Apple store for $400, and we’ll be judging discounts against that price. The 44mm watch starts at $429 (it costs $529 with cellular features).

For those who like to add a little flair to their style, you can save $60 on the red wristband Apple Series 6 Watch through Amazon. If you want a little less flair, the deep navy sports band and pink sand sports bands only carry a five percent discount. Either way, you’re getting a great deal on the Best Apple Watch to date. 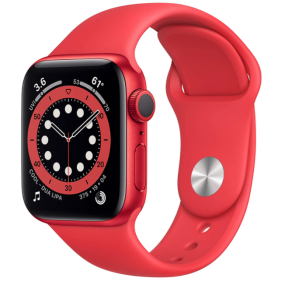 Like the 40mm Series 6, the discounts available on the GPS + Cellular 44mm smartwatch varies slightly depending on the color. Right now, the model pictured below is available via Amazon Prime for a 13% discount (about $69). Here, you get a bigger watch face, GPS and all of the wellness tracking that makes the Series 6 such an elite smartwatch. It’s not a whopping discount, but you are saving some scratch. In addition, the cellular model lets users send and receive calls and texts, and get directions, without a phone.

Editor’s Note: Some models of this smartwatch are back-ordered on Amazon, but orders can still be placed while the discount remains in effect. 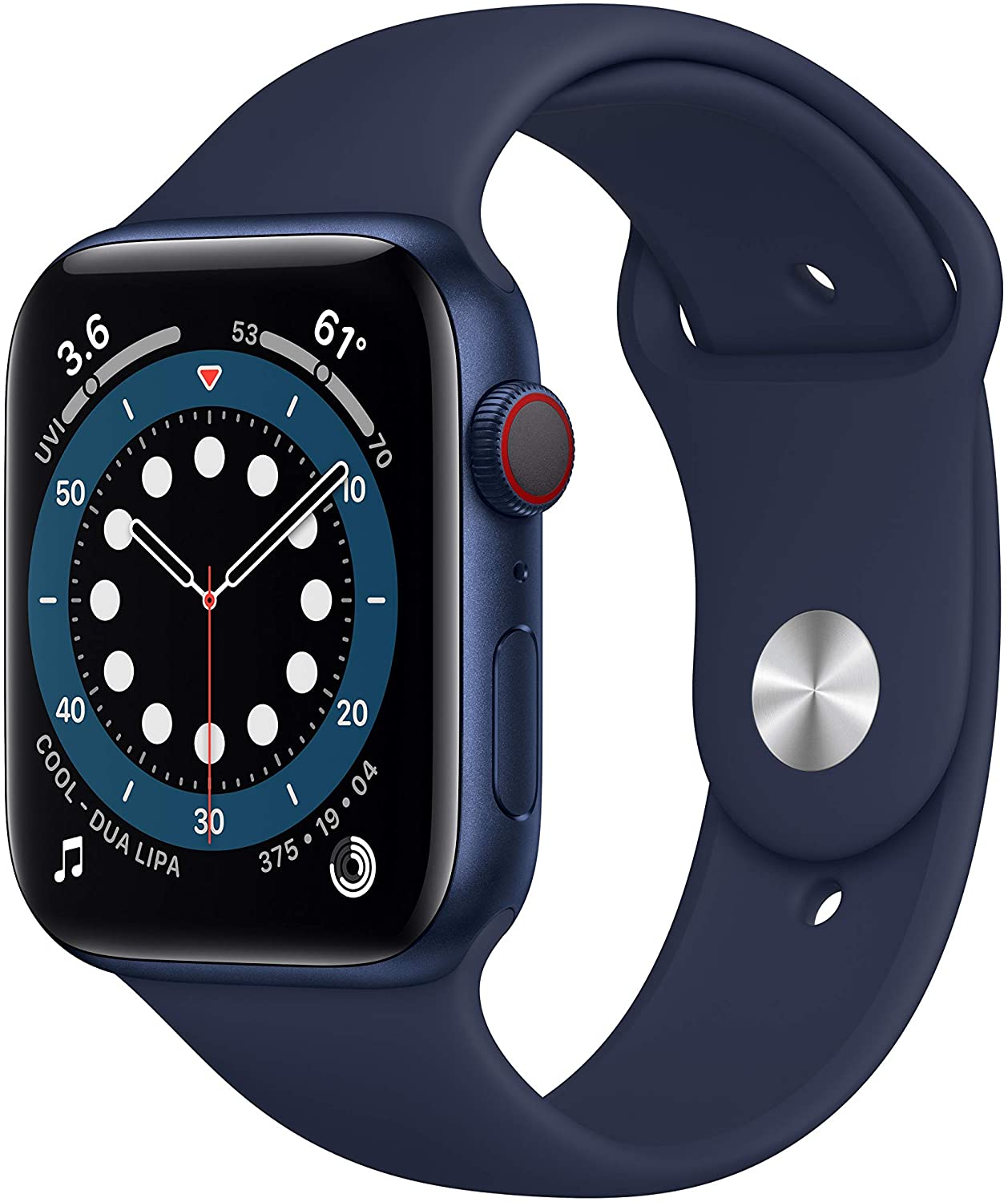 Looking for the best Apple Watch deals on the popular Series 6 pink model? Currently, Walmart has a $50 discount on this smartwatch while supplies last. This would make a great gift for Valentine’s Day. 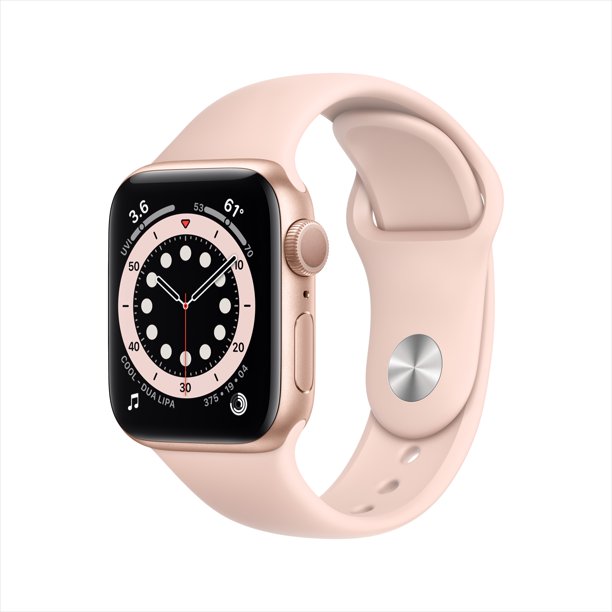 These smartwatches have a great price point for those who aren’t willing to drop upward of $400 on a new Apple Watch. Starting at $279 and $309 for the 40mm or 44mm watch face, this watch has many of the same wellness features found in the Series 6. The biggest difference is the lack of an always-on display. If that’s not a deal-breaker, you can save some serious coin, especially with the Apple Watch SE deals below.

You can take calls from your wrist, train and swim with the Apple Watch SE. And now you can do so and save about $15 through Amazon. The full discount only applies to the silver aluminum case and white sports band. 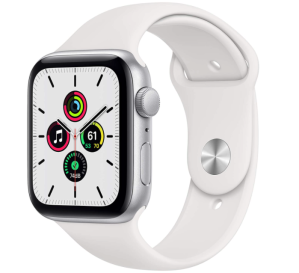 You don’t get as good of a deal opting for the 40mm, but you can save an extra $20 off the GPS + Cellular version right now through Amazon. The Apple Watch SE is up to two times faster than a Series 3 watch and can detect irregular heartbeats with the built-in ECG tech. There’s a lot packed into the SE, and now’s a great time to get it for a little cheaper. 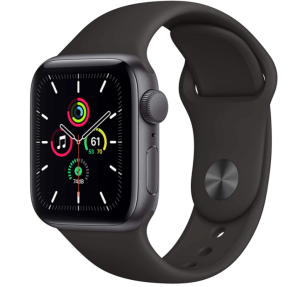 The Apple Watch Series 3 is still a great choice for those who want to try a smartwatch but don’t want to empty out their savings account to do so. The Series 3 watch face is smaller than newer editions — 38mm and 42mm compared to 40mm and 44 mm — and starts at $199 to $229.

While it’s no longer the top-of-the-line Apple Watch, these previous-generation products are still superior to your average non-Apple smartwatch. You can find good deals on the Series 3 at both Walmart and Amazon.

Right now, you can save $30 on a Series 3 Apple Watch through Amazon. You can choose between a white and black band — both include the same discount. It doesn’t have nearly as many wellness features as newer models, but you can still store music, swim and track your fitness and elevation with the Series 3. 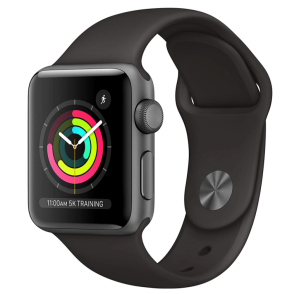 Want a little bit bigger watch face than the 38mm? You can score the same discount when opting for the 40mm model. Customers can choose between the white and black models. 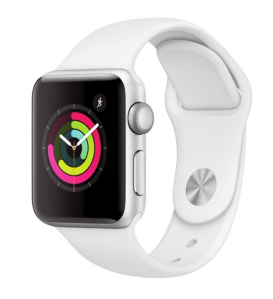 The Apple Watch Series 5 is no longer listed for sale at the Apple website, as it’s been made largely obsolete by the newer and better Series 6. However, if you’re looking for the best Apple watch deals on the Series 5, you can head to Best Buy to score big discounts on these smartwatches, which were considered cutting edge not too long ago.

The Series 5 ranges in price from $399 to $499, although versions with both GPS and cellular calling features cost as much as $800. If you want to be able to call and text with your new smartwatch, opting for a Series 5 isn’t a bad idea.

This Apple Watch comes with an always-on display, ECG as well as GPS and cellular calling so you can remain connected even without your phone. The upgraded case and band would normally send this price to $800, but you’ll save $300 through Best Buy right now. Plus, it comes with six months of Apple Fitness +. 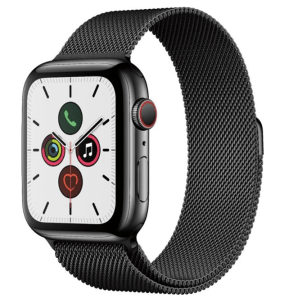 The gold stainless steel case combined with the stone sports band looks incredibly stylish and sophisticated. What’s not sophisticated is saving $300 through Best Buy on this beautiful watch, dropping the price down to $399. The Series 5 is one of the most popular Apple Watches created and combined with the wristband and case, you’re getting a screaming good deal. 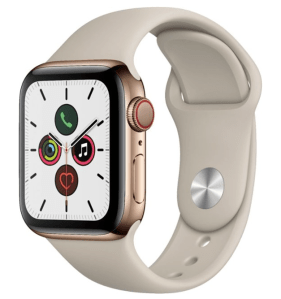