Can you play action games, sports games and first-person shooters on an iPhone? Sure you can. It’s just not a great experience. Without a dedicated gaming controller, playing video games on your iPhone is a major challenge. Your controls consist of your two thumbs and a touchscreen, and that’s a crappy way to play. That’s where the Backbone One mobile controller comes in. While you don’t necessarily need this iPhone gaming controller to play games, a mobile controller can make the experience infinitely better.

That’s the promise of the Backbone One controller — it makes your gaming life truly portable.

Or at least that’s what Backbone promises — all of the top games and franchises from Rocket League to Grand Theft Auto to Halo all in one place, on your phone, and with actual gaming controls. That’s the kind of promise that sounds too good to be true, so we asked Backbone to send us a unit so we could put it to the test.

One Doom-obsessed Gen-Xer and two very proficient late-teen gamers (who are not afraid to loudly denounce games and gear that displease them) gave it a workout.

Keep reading for our full Backbone One review and find out why this gadget earned a spot on our list of the Coolest Tech Gadgets of 2022. 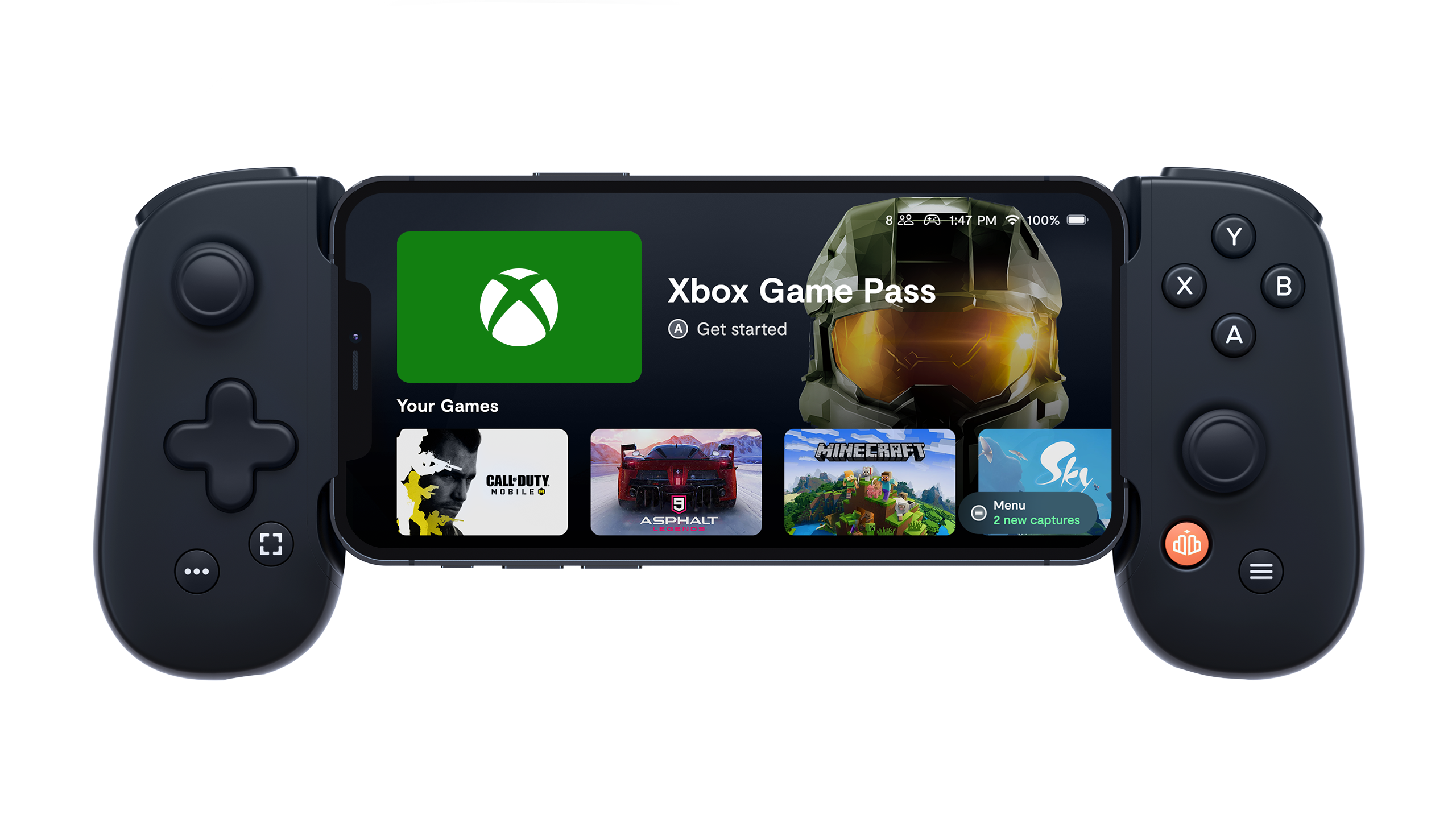 The Backbone One Review: At a Glance

The Backbone looks and feels very similar to an Xbox controller, and it’s very comparable in size and feels to the PlayStation controller (pictured below). What it does not feel is cheap — it’s sturdy, has good heft without being heavy, and you can game with it without feeling like you’re going to break anything. The spring holding your phone in place is strong, and the phone never wiggles. The R1/L1 buttons and R2/L2 triggers are firm, springy, and super responsive.

There’s a Lightning port at the bottom so you can charge your phone while you play, which helps because we found while playing the phone drains quickly. The downside is that it’s not portable if you have to plug it in. The Backbone itself does not require any charging or batteries — a major plus. There’s also a 3.5mm port for wired headphones.

Even if you consider yourself a hopeless non-techie, setting up the Backbone from unboxing to action could be done in about 10 minutes. If you’re more adept with tech products, it could probably be done in half that time. In short, if you’re worried about the setup process, don’t be.

There’s no assembly, no wires or batteries required — just stretch the Backbone’s spring-loaded center, take your iPhone out of its case (even the slim ones) and position it so the Lightning port lines up, and let it close. Boom, done. 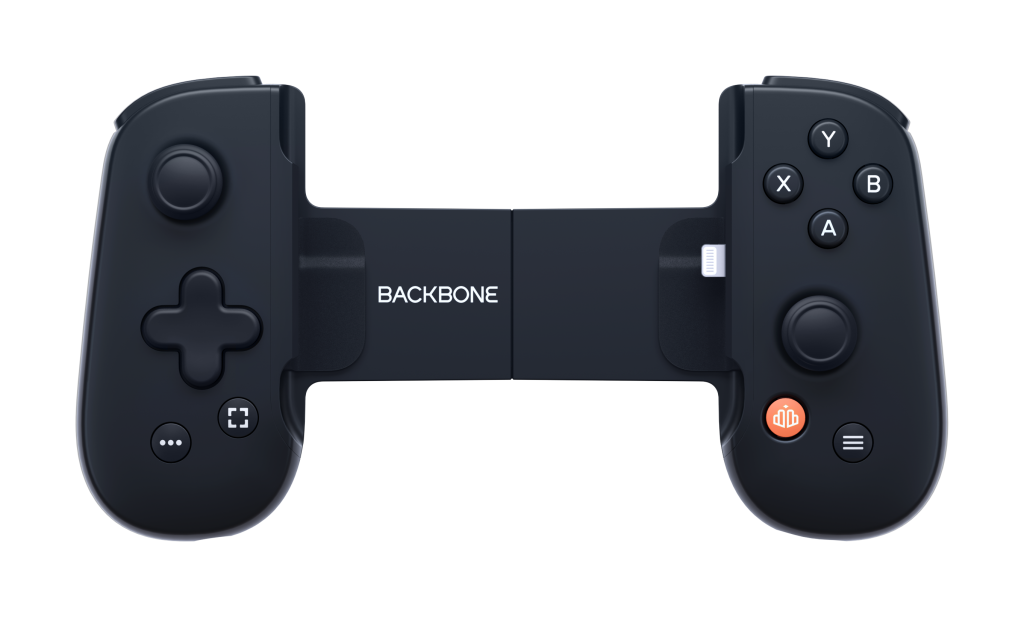 A quick download of the Backbone app, and a press of the orange button on the right-hand side, and Backbone is launched. The home screen is full of promise — all those games… so many games…

For our Backbone review, we wanted to test this mobile controller on a variety of systems, from Xbox to PlayStation to Twitch streaming. Across the board, we were impressed.

The Backbone homepage is clear and intuitive, showing you a lengthy but easily searchable list of games. There’s icons showing whether they are in Apple Arcade, Google Stadia, Steam (via the SteamLink app), Xbox (usually via the Xbox Cloud Gaming app), PlayStation Remote Play, Discord, and others. (The Backbone One comes with all kinds of free trials: one month of Xbox Game Pass Ultimate, three months of Discord Nitro, one month of Apple Arcade, and two months of Stadia Pro.)

Not surprisingly, the easiest use of the Backbone is on Apple Arcade, because there’s no proprietary app or membership needed. So that was our first stop, where we very quickly discovered that we still, in fact, suck at Doom II. But whether we were playing a shoot-em-up like Doom, a racing game like Gear Club Stradale, or a flight-sim game like AirFighters Combat Flight Sim, the controls were silky smooth. You’ll wonder how in the heck you played with just a phone. Chances are you did it once or twice and then never reopened the game. The Backbone One breathes new life into these games.

Twitchers can do their thing on the Backbone One too — streaming is just as easy here as it is on any console.

Cashing in on the Xbox Game Pass Ultimate code provided was a little tricky, and it’s easy to just settle into a routine of playing from the Apple Arcade, but it is well worth exploring all of the games and platforms from the Backbone app, which functions almost like its own OS. Our devoted PS5’ers gave the PS Remote Play a solid thumbs-up, and Steam Link games performed well. Apple Arcade games have the home-field advantage on an iPhone, of course, and are easiest to load up and roll.

If the Backbone One were white and twice the price, you would think Apple had created it themselves. That’s how well it works with an iPhone. Technically, the Backbone One is just a controller. But paired with its app, it’s the one place where you can truly game on pretty much every platform at any time on the go — as promised. We haven’t put it down since it showed up.

So Should You Buy the Backbone One?

Yes, absolutely you should. If you’re a casual console gamer, a retro gamer or a fan of Apple Arcade’s wide selection of games, the Backbone One is a must-have enhancement for your iPhone. It makes gaming on your phone easier and allows you to use an actual controller just like you would with any other video game console. More competitive console or PC gamers will enjoy it as a fun diversion and an easy way to make console gaming portable.