Driving and phones don’t mix. Every year, countless accidents are caused by distracted drivers who are either texting or talking on their phones. These accidents can result in minor fender benders all the way up to horrific fatalities. Banning texting and driving in several states has helped reduce the number of accidents, but as many drivers know, smartphones and their mapping systems are still very much a part of driving for many. If you’re going to use your phone for directions when driving, do it as safely as possible with a car mount designed for iPhones and smartphones.

Car mounts are designed to hold phones closer to eye level in order to give drivers and their passengers a safer eye-line when it’s time to glance away from the road to check the map. Car mounts keep phones from falling between or under seats, providing a safe place to store the phone when the user is driving. Car mounts often provide an unobstructed opening so that users are able to charge their phones while driving.

Keep your phone, yourself and others safe with convenient and easy to use car mount holder.

For a mount that fits almost any phone and works with most cars, we recommend the Beam Electronics Universal Smartphone Car Air Vent Mount Holder. Beam uses a silicone pad and cushioned clip to grip onto air vents and hold the mount in place. Arms on either side of the mount clamp the phone and provide a sturdy and secure hold. A quick-release button on the back of the mount can be used to release the phone when necessary. The Beam is designed to be able to withstand bumpy conditions and extreme temperature changes. A soft padded interior helps to protect the phone from scratches and scuffs.

Pros: The Beam easily rotates 360 degrees, allowing users to find the optimal angle for their phones.

Cons: Phones with heavy cases may cause the mount to fall off the vent. 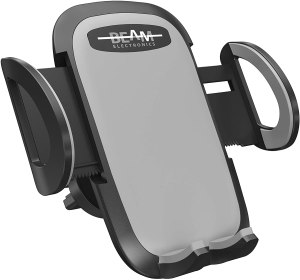 Quickly attach and release your phone from its mount using the inventive WizGear Magnetic Phone Car Mount. Included in the WizGear set are for metal plates and four protective films that can be attached either between the phone and its case or directly onto the back of the phone’s case. The phone then attaches to the magnetized mount, which has two size options for fitting onto a standard car vent. Users can turn their phone in any direction to get their optimal view.

Pros: The magnetic back allows for fast mounting and release that does not require fitting the phone into a clamp or holder.

Cons: The magnet won’t affect the phone’s signal but will interfere with wireless charging. 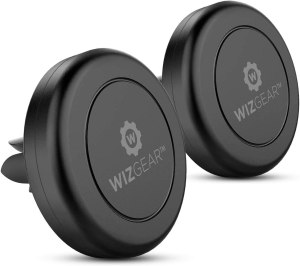 If you want a car mount that won’t block your vents but will still keep your phone high enough to easily see while driving, we recommend the iOttie Easy One Touch Dash and Windshield Car Mount Phone Holder. The mount has an easy to use one-touch lock and release button and a bottom foot that can be adjusted to fit cases between 2.3 inches to 3.5 inches. Users can either attach the mount to the dashboard with the one-time use dashboard disk or attach it to windshields with the re-positional and reusable suction cup.

Pros: The iOttie features a telescopic arm that can extend up to 6.5” and pivots 225 degrees.

Cons: Extreme temperature changes can affect the pad’s ability to suction to dashboards. 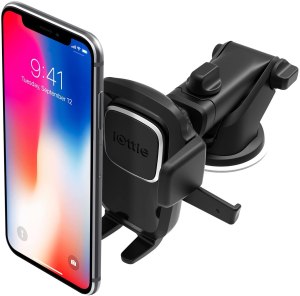 For a smartphone car mount that won’t dislodge due to quick braking or rough terrain, we recommend the WeatherTech CupFone. The universal holder fits almost any size of smartphone and can easily be adjusted for a secure hold. The base of the holder allows users to rotate their phones a full 360 degrees for optimal viewing. The base of the holder is exposed to allow users to charge their phone while it’s in the holder. The CupFone has interchangeable base cups that can easily be twisted on and off to fit any cup holder.

Pros: Unlike the other mounts on our list, the CupFone doubles as a convenient and stable smartphone holder outside of the car as well.

Cons: Drivers may not want to give up one of their cupholders. 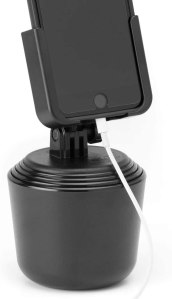