When it comes to using your cell phone while driving, laws vary by state. But one thing most people can agree on is that phones are a big distraction. Because of their advanced navigation systems, they’re also a big help. We all know that using our phones to text, talk, and play music while driving can be distracting, but because we often use our phone for directions, it’s difficult to put them away while the car is in motion. If you need to use your phone, use it with a wireless car charger to help cut down on distractions and make your phone easier to see.

Wireless car chargers keep phones fully charged while you’re driving, which means your map won’t die halfway to your destination. A wireless phone charger works with multiple brands and models of smartphones, making it easy to have one universal charger for everyone in your car. It also means you don’t have to keep remembering to bring your home phone charger with you on your daily commute.

If you’re going to use your phone while you drive, make sure you’re using it in hands-free mode while charging your phone and keeping annoying wires out of the way.

For a car charger with multiple location options, we recommend the Squish 2-in-1 Universal Cell Phone Holder Cup Holder. The Squish can be placed in a standard size cup holder and has a 7.6-inch extending arm that can be adjusted. For a closer view, users can also install the Squish using the air vent clip. The 10-watt Squish quickly charges most models of smartphones, supporting both a 9V/1.8A quick charge and 5V/2A standard charge. The Squish is Qi standard approved, which means it won’t damage a phone’s battery even after it’s fully charged. Phones can easily be removed by simply touching the sensor button and remain in place while in use thanks to an intelligent gravity-sensing lock. The non-slip silicone base makes the Squish a great option for work vehicles that travel on rough terrain.

Pros: For larger vehicles, the Squish is available in with a 12.1-inch arm.

Cons: Otterbox and UAG cases don’t fit into the Squish. 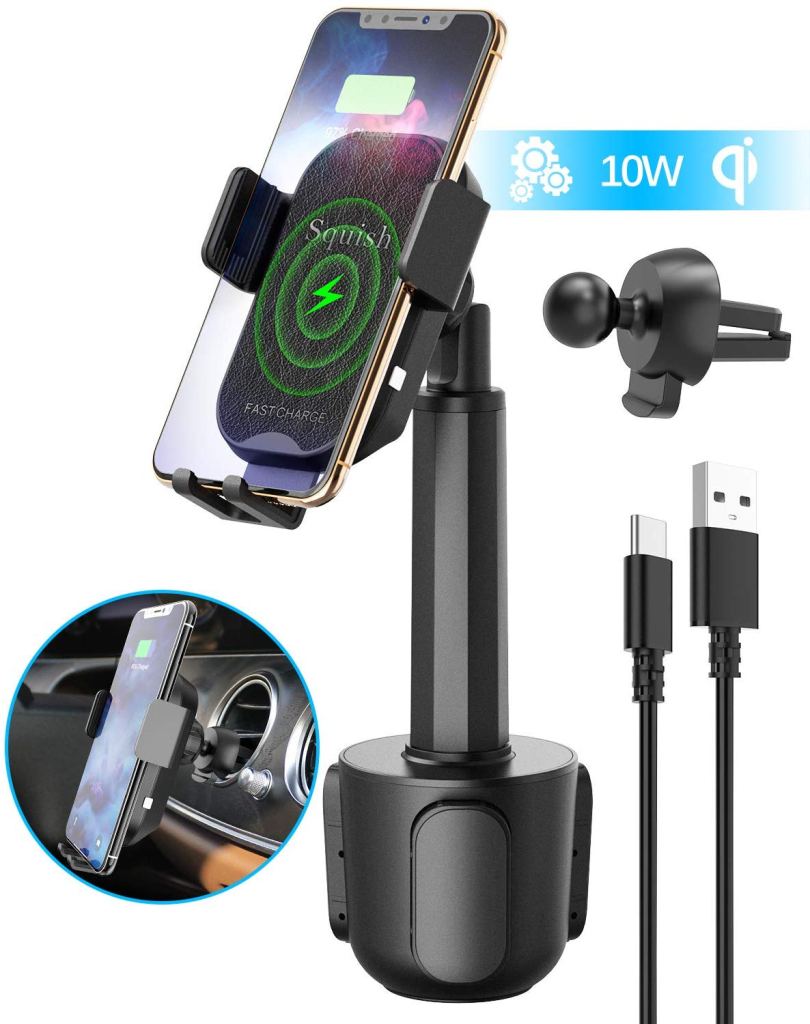 Bring your phone into your line of vision with the ZeeHoo Wireless Car Charger, which has a vent clip and dashboard suction cup as well as a 7.5-inch telescopic arm. Use vertically or horizontally with most models of smartphones thanks to the ZeeHoo’s 270-degree adjustable arm. The ZeeHoo’s large size means cases don’t have to be removed in order to fit into the secure clamp. Using universal compatibility, the ZeeHoo’s 2.44-inch charging area quickly brings a dead phone battery back to life. When a phone is fully charged, the Squish automatically stops charging in order to protect the phone’s battery.

Pros: The ZeeHoo has an automatic one-handed push-button sensor that grips and releases the phone for added convenience.

Cons: If the car is turned off, there is no power going to the ZeeHoo, which makes it difficult to remove the phone using the sensor button. The vent clip and dashboard suction are not as reliable in hot weather. 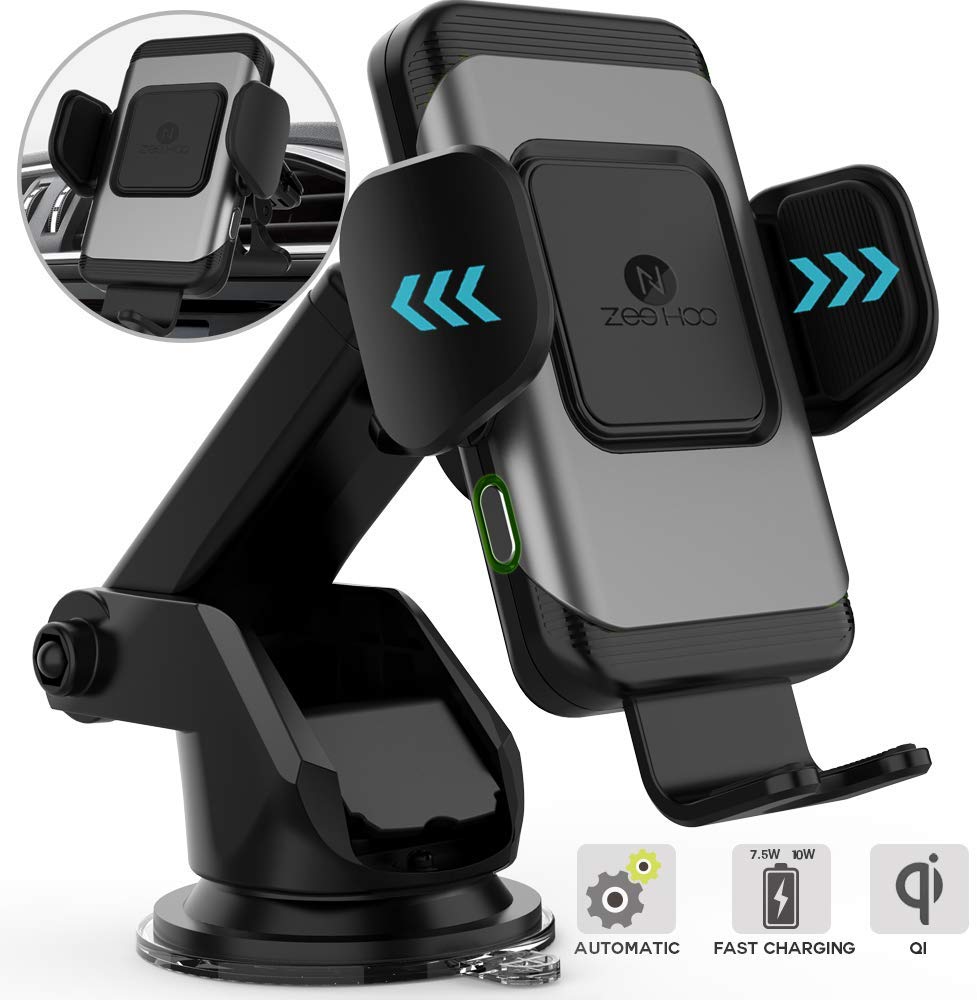 For a powerful and versatile wireless car charger, we recommend the CTYBB Qi Auto-Clamping Air Vent Dashboard Car Phone Holder. Available in black, red and silver for a more eye-catching finish, the CTYBB is Qi-certified and has a built-in chip that smartly identifies the make of the phone and quickly begins charging it. The CTYBB is powered through QC 3.0 charger that is inserted into the cigarette lighter and has two USB 3.0 ports, enabling users to charge two devices at once. When it’s time to get out of the car, users can easily release their phone from the mount using the one-button release. The mount has a 360-degree ball mount that enables users to find the optimal placement for their phone. The CTYBB has smart safety features built-in, including protective functions against over-charging and over-heating your phone.

Pros: The CTYBB can be installed two ways, including mounting in the air vent and using the suction cup on the car’s dashboard.

Cons: The CTYBB is better for Samsung users since it can charge Samsung devices at a speed of 10 watts and can only charge iPhones at a speed of 7.5 watts. The suction cup provides a more stable mounting option than the vent clip. 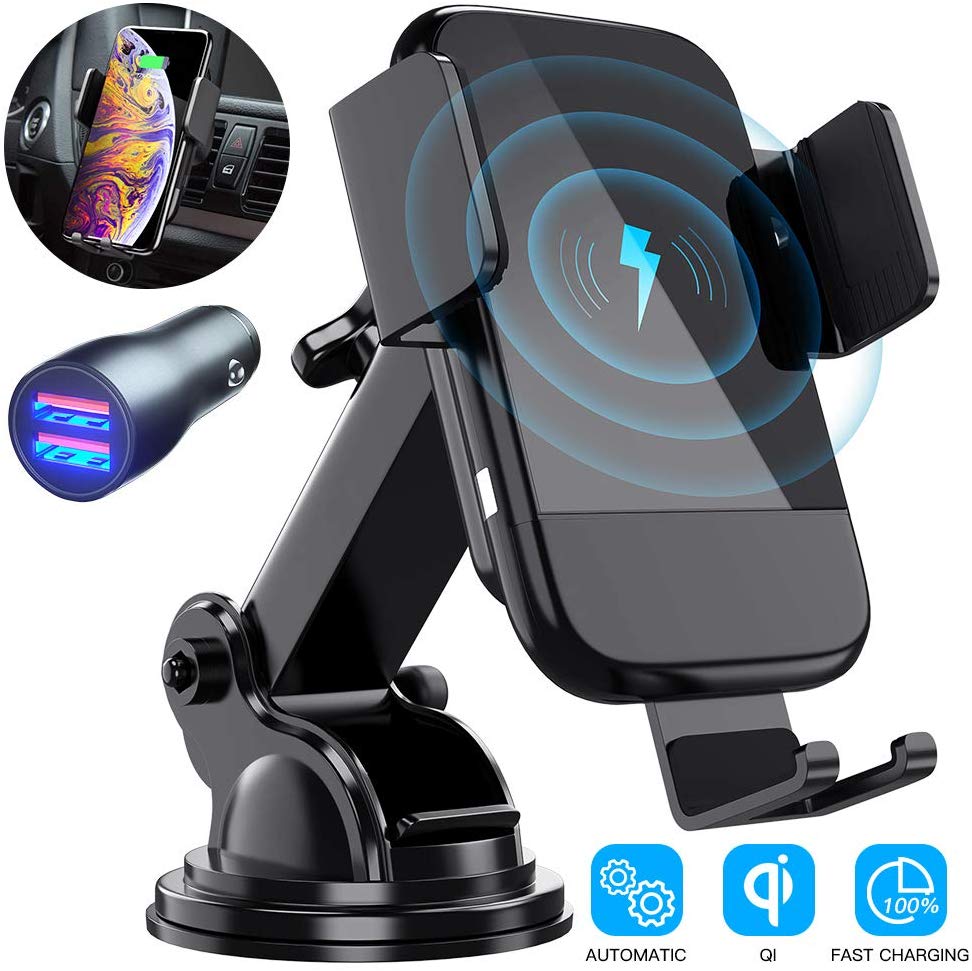