You know how car 12V chargers are always getting lost? Left behind, discarded? Consigned to the rubbish bins which become the plastic and metal heaps in landfills and industrial recycling centers, which, in turn, inspire the look of post-apocalyptic sci-fi movies and video games? Well, this Borderlands-themed car charger brings it back full circle.

The Borderlands RPG/ first-person shooter franchise takes place on a faraway world covered in barren wastes and industrial trash heaps, in a distant future where militarized mega-corporations force prisoners to colonize inhospitable lands in order to look for weapons and mineral wealth. In other words, a world nothing at all like our own. J/k. 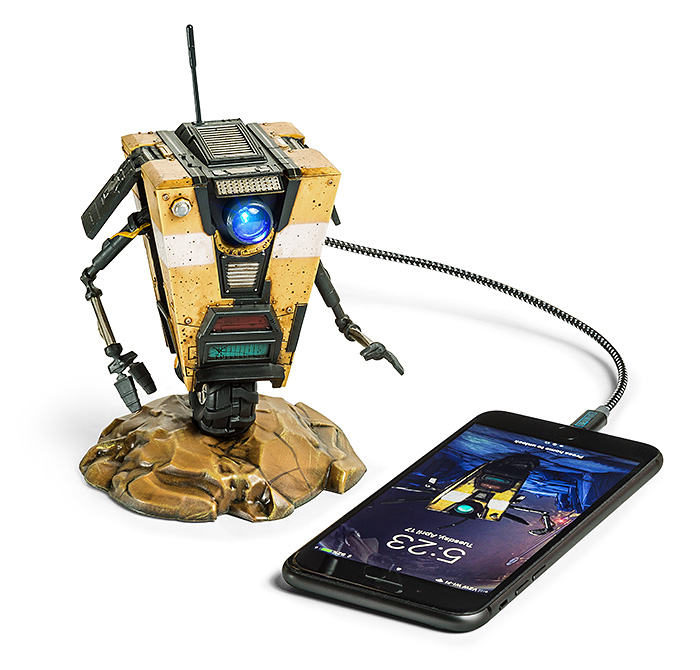 The beautiful, cell-shaded animation and backdrops helped make Borderlands a surprise hit, as its world-building really resonated with the post-crash, glitch aesthetic in the years after its 2009 release. The Claptrap robots in the game are “general purpose bots,” programmed to do menial tasks and, for an authentic menial worker experience, to feel loneliness and despair. In later versions, Claptrap becomes upgradeable into an “interplanetary assassin bot,” something we’re pretty sure won’t happen to this convenient 4-device USB hub.

You don’t need to be a die-hard gamer, to appreciate the aesthetic. And you definitely don’t need to be a gamer to appreciate the utility of a car charger that looks unique and makes noises at you. This one, an officially licensed, ThinkGeek exclusive, glows blue when it’s getting power, and helps you know when a phone or other device is plugged in by talking to you.

Car chargers may, as a class of object, get lost easily and seem pretty disposable, but this one gives you the sometimes-uncomfortable sense that it’s self-aware about that and it requests your attention. Luckily, there’s a mute button.

From Star Wars to Back to the Future, Power Up With These Movie-Inspired Chargers