When it comes to smartwatches, there’s Apple, Fitbit, and as far as most folks know… that’s about it. (Sure, there are Android smartwatches, but nothing that comes close to matching Apple’s offerings.) However, athletes, runners and trail hounds know there’s also always been Garmin. The wearable company recently released its newest smartwatches: Garmin fenix 7 Series and Garmin epix (Gen 2).

These two new additions join the most recently announced venu, Garmin’s extensive core lineup, Garmin golf watches and its Forerunner models. They’re what you could call high-performance smartwatches for sporty and adventurous types.

It’s been three years since the release of the Garmin fenix 6 Series, but is the fenix 7 Series worth the wait? We’ve got the details on the latest smartwatches from Garmin below, so keep reading to see if any of them deserve a spot on your wrist.

The new Garmin fēnix 7 Series (technically, it’s spelled “fēnix”) adds an intelligent battery boosting option with solar charging on select models, so the watch can harvest energy when you’re nowhere near a plug. Garmin has also made this smartwatch more easily navigable and intuitive with a dual button and touchscreen interface. Plus, when you’ve stayed out too late, a built-in dimmable LED flashlight can lead the way. The light will also sync up with your pace for runners, alternating between white and red light with each arm swing for visibility that’s not distracting for you. Finally, advanced performance metrics allow athletes to monitor and track exertion levels during a run or bike activity.

The Bottom Line: The Garmin fenix 7 Series is now the most advanced smartwatch for athletes on the market 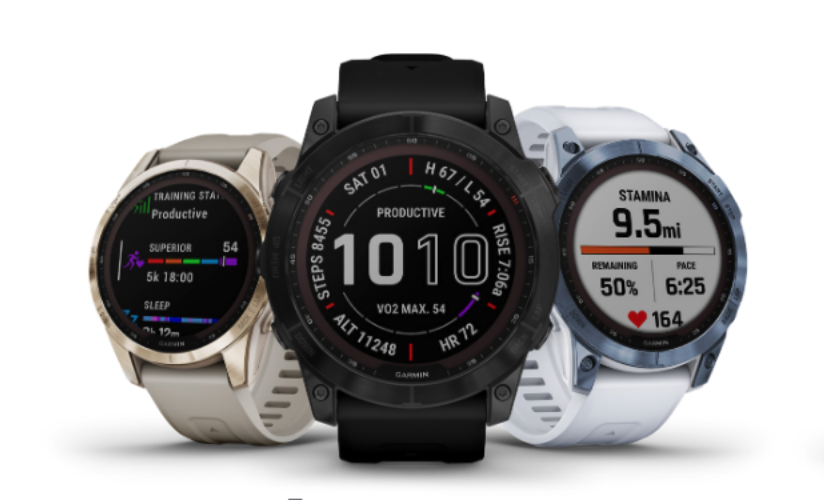 If you thought you had to wait a long time for the Garmin fenix 7, the epix line was originally introduced back in 2015. The new Garmin epix has a lot of the same features as the fenix 7 and other Garmin werables, but it offers a gorgeous color touchscreen display that’s truly a thing of beauty. Garmin is marketing this as a truly premium smartwatch, and it carries a higher price tag than the new fenix.

With its bright 1.3-inch AMOLED Display, the new epix watches truly look like next-generation wearables. With up to 16 days of battery life, epix is made for the road and the great outdoors. It’s even ideal for sports apps and gym workouts, pickleball and tennis, climbing, bouldering, golfing, surfing and skiing, which can help you make the most of your performance. There’s also 24/7 health monitoring (including sleep and stress tracking) and smart notifications for calls, texts, calendar reminders, plus music storage, safety and tracking and Garmin Pay.

The Bottom Line: Take the features you love with the fenix and add an improved AMOLED display