There are just some things that our smartphone apps simply cannot do. But with this plug-in portable fan that connects to your charging outlet on your device, you can upgrade your phones digital capabilities to solving real-world issues. I tried out the small fan during the heat of the summer last season by the beach and around Los Angeles, and yes, I felt a little ridiculous at first until it was too hot for me to give a hoot what anybody else thought of my little life hack. People then began asking me to borrow it and wanted to know where I got it from—embarrassment avoided. As they have taken off in popularity, I think people are warming up to the idea that when it is hot enough outside, you will do anything to stay a little cooler.

The fan is made using a micro-speed motor that emits fairly strong wind with quiet feedback from the device. They use soft rubber blades that are not going to cut you but don’t feel good when you accidentally hit your face or skin. It works at a rapid speed to give you enough of a breezy chill around the face and neck (and pits) when the heat is just too much to bear. It also doesn’t use too much of your phone battery, making it ideal for long days outside or for festival season right around the corner. 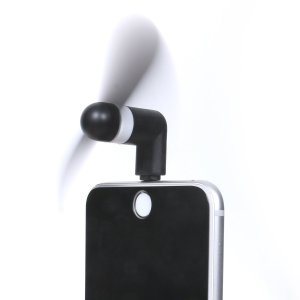 These also make awesome gifts as they are small enough to be a stocking stuffer or to top off a gift with this simple but handy gadget. This particular pack is sold with four black fans and one extender adaptor so newer iPhones can accommodate the plugin via their Lightning connector. As far as the portability of the fan goes, you can’t get much better. The fan can be stashed with your headphones, in your travel tech kit, or jacket pocket and makes for a great addition to long train and bus rides as you can just plug it in and watch your screen as the fan gets whirring—giving you just enough breeze to stay comfortable. 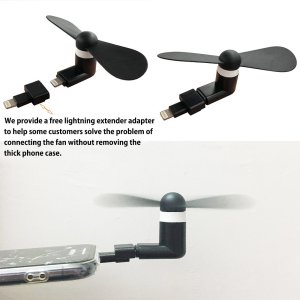