* Clear, durable, slide-on iPhone case
* Cigarette package-style warning about social media
* Help yourself kick the habit, or revel in the irony of your choices

This phone case issues a government-mandated looking warning, proclaiming that social media seriously harms your mental health. You might take this as a cue to tone down your social media addiction, or let your phone wear it ironically, since you’re always on social media and chances are most of the content you follow is ironic, absurd, or consists of performative self-aware nihilism.

Is the warning accurate? Turns out there have been a large-ish number of scientific studies done on the matter, which is to say, we’re not sure. While the jury’s still out on whether screen time harms your mental health or disrupts sleep, results from a pair of big studies have been contradictory, with a recent paper arguing there was not, in fact, a link between hours spent on screens and diminished sleep quality, once factors like shift work and school schedules were accounted for.

Other studies have shown that higher levels of time spent on social media correlate with a sense of withdrawal, depression and anxiety as well as lower self esteem. On an intuitive level, it is pretty easy to see how spending 8+ plus hours a day lurking Instagram and Facebook can make one depressed. 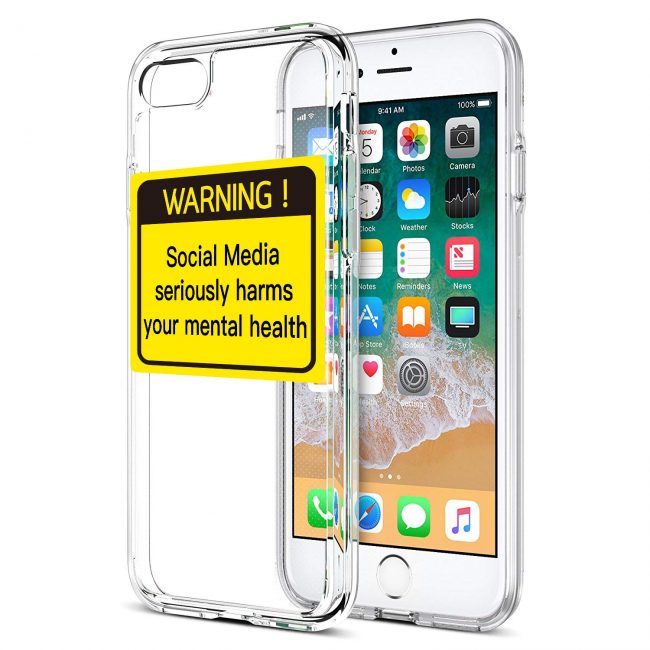 Among teens in a recent British study, the most well-adjusted people spent a “moderate” amount of time on social media. It might also be that the correlation between social media use and depression is just that – correlation, not causation. Perhaps people who are already isolated or lonely, and thus prone to depression, might be more inclined, almost as a coping mechanism, to spend all day on social media.

Despite the hand-wringing, there’s probably not much that’s all that different about the current generation’s relationship to media in general. Decades ago, they thought TV was rotting our brains, and a century before that, temperance enthusiasts often claimed that reading too many novels was making young women “melancholy” and “neurasthenic.”

So whether you’re an influencer or trying to stay above the influence, this iPhone case with its stark, official looking warning is way to make some kind of a statement.

The Best Phone Cases To Get Right Now