Full disclosure: the Apple Watch Series 3 has been my smartwatch of choice for the last 3+ years now. I’ve tried a handful of other smartwatches, fitness trackers, and hybrids during that span, but none have been able to cut my lifeline to the Apple Watch. None.

That’s important to note because I didn’t think that the Withings ScanWatch Horizon would stand a chance at changing my mind. After spending nearly a month of using the hybrid smartwatch, I was surprised by how hard it was to switch back to my old Apple Watch. I honestly didn’t think I was going to like it so much, but I really did.

Keep reading for our full review of the Withings ScanWatch Horizon. Not only is this a masterful new hybrid watch, but it’s also one of the best men’s watches in any category. 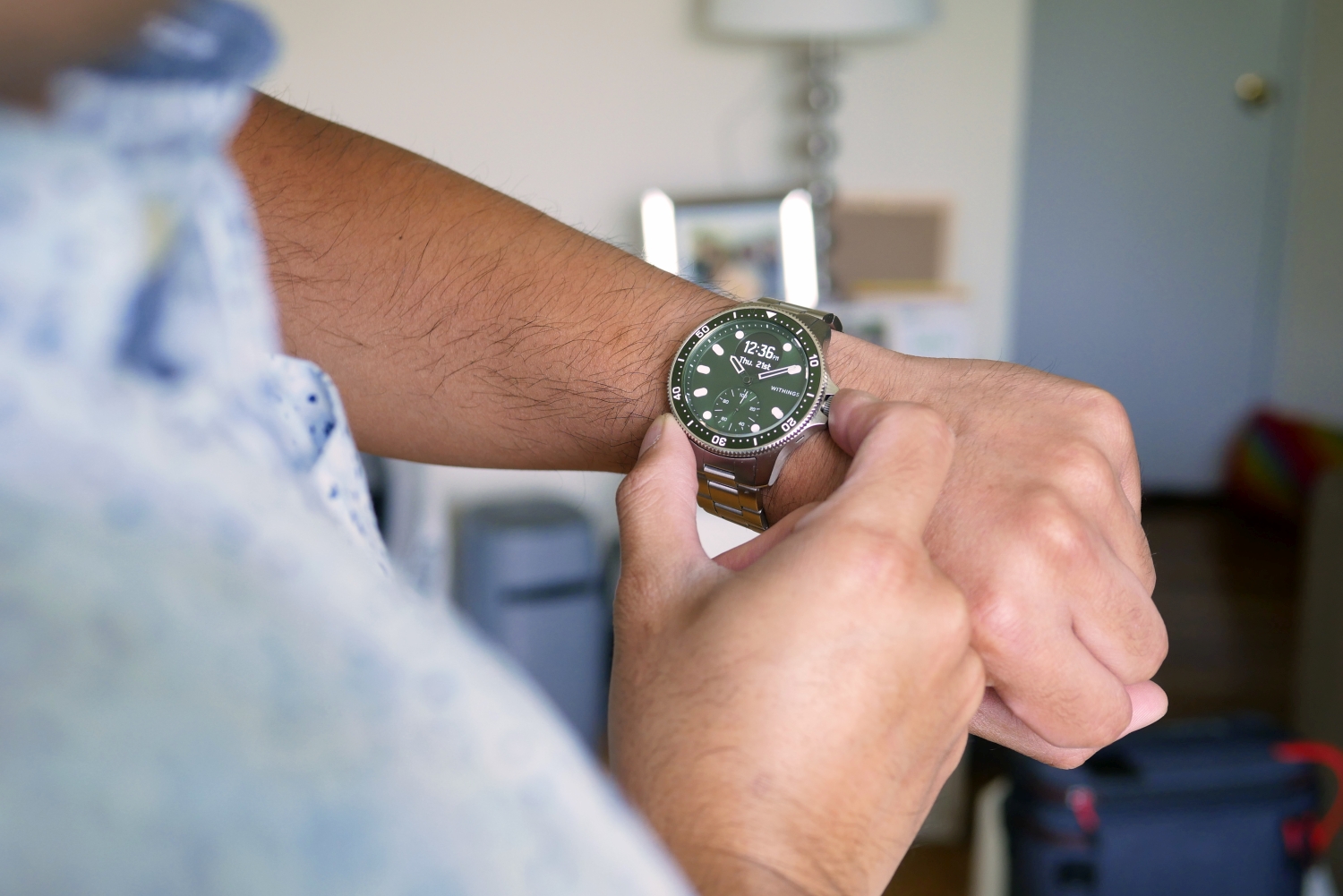 Included in the Box: 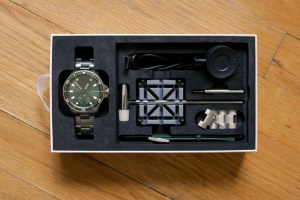 Naturally, there was a huge disparity coming from the Apple Watch when you look at the ScanWatch Horizon’s design. I won’t argue that Withings did an excellent job of maintaining the signature look of a dive watch, but the premium materials and construction are more of a statement that the wearer has a sophisticated taste. This is a stark contrast from the Apple Watch’s design, which is boxy and looks like you’re wearing just a tiny display on your wrist. Part of the ScanWatch Horizon’s appeal is its traditional design, much like a Seiko watch.

That’s made poignant upon closer inspection of the casing, which features a stainless steel casing, rotating bezel, brass dial, and sapphire glass. I also love some of the finer details, like how the arms move away whenever the crown is pressed to show the time on its PMOLED (Passive Matrix Organic Light Emitting Diode) display. It’s another type of display technology similar to the OLED and AMOLED (Active Matrix Organic Light Emitting Diode) displays frequently used in TVs and smartphones, but PMOLED displays are typically monochrome, more energy efficient, and used for smaller-sized panels.

It’s a completely different-looking smartwatch than what you’re probably accustomed to seeing. For those that want a premium-looking watch that doesn’t look more like gadget on their wrist, the Withings ScanWatch Horizon checks off all the boxes. 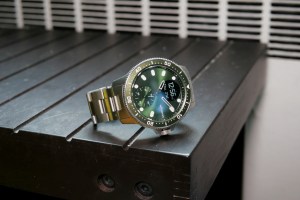 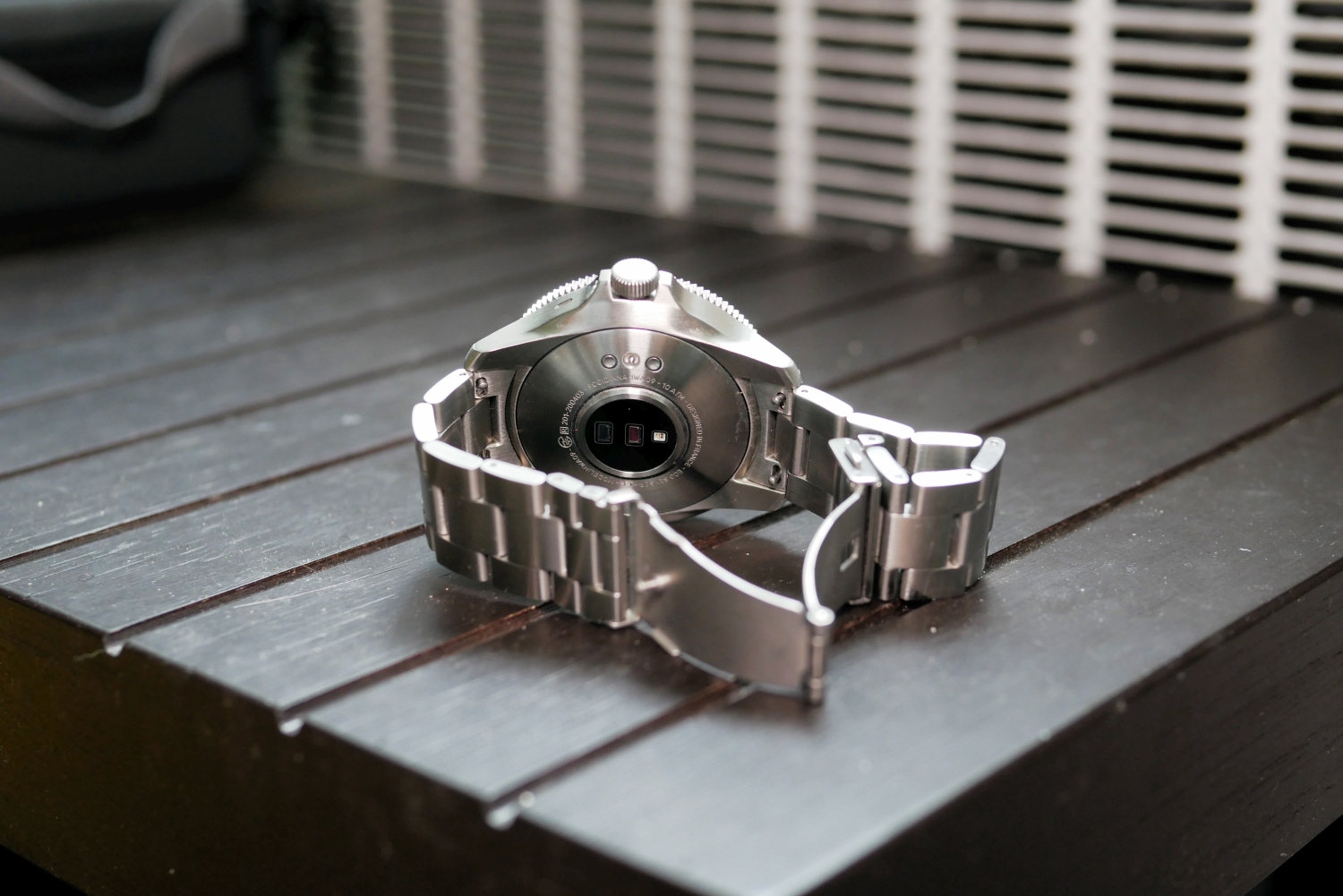 Even though it has a premium design that calls to mind dress watches, it’s still a true sports and dive watch at heart because it can survive submersion up to 100 meters (that’s a little over 328 feet). While scuba diving is an activity that few people partake on a frequent basis, not having to worry about the depth affecting the watch is one less thing they’ll have to worry about.

What I really for interesting while testing the ScanWatch Horizon was that I found more people taking quick glances at it. That’s the kind of command that the Apple Watch used to have with its design when it first came out, so it goes to show that Withings’ design is a compelling one too.

Knowing that it’s a hybrid, I know that the Withings ScanWatch Horizon functionally wasn’t going to beat the Apple Watch. That’s true because it’s mainly limited to sending notifications, accessing a few fitness/health stats, and tracking workouts. Anyone that’s used to accessing apps on their Apple Watch, like hailing an Uber ride, will be comprising on functionality when switching over to the Withings ScanWatch Horizon.

If you’re coming from another hybrid or smartwatch, say Fitbit or Samsung, you’ll run into the same situation. It’s on par with the features and functions of a Fitbit or comparable fitness tracker, but it lacks the more diverse functions that are on smartwatches running Google’s Wear OS. Now, don’t let that dissuade you, especially if you’re all about the health and wellness functions.

Despite being functionally inferior, I liked how I could choose what specific apps from my smartphone and it would send notifications — which lessens redundant ones I would normally have to deal with. Not only does the watch buzz whenever notifications come in, but I also like how the PMOLED display lights up and displays them. In the dark and even on the brightest days, it’s visible and easy to make out.

Those diving into a fitness-centric watch will find the ScanWatch Horizon competent at tackling an assortment of workout and fitness-related activities. And that’s on top of being able to tell the time and date. 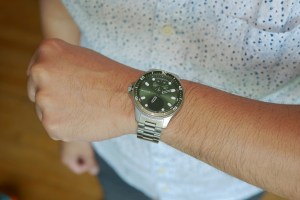 Since it features sensors such as a heart rate sensor and accelerometer, it actively keeps track of my step count throughout the day, as well as my heart rate. These are all useful stats, but its focus on health is boosted by the addition of measuring blood oxygen levels, ECG readings, and sleep tracking. I did find its accuracy similar to the Apple Watch, so at least it offers the same level of consistency with these metrics. Sure, most of today’s smartwatches offer a degree of health tracking, but blood oxygen and ECG readings are still rare.

I used it a lot for tracking my workouts, both lifting weights and outdoor activities such as running, walking, and biking. Even though it tracked them independently, without the need to have my phone nearby, it lacks local storage or apps that could let me listen to music with a pair of true wireless earbuds. Although, it does feature built-in GPS that precisely showed my biking and running routes on a map through the Withings Health Mate app.

Like I mentioned earlier, it’s functionally inferior against the Apple Watch, but it’s not automatically a dealbreaker because it still managed to do an excellent job at providing me detailed information around my workouts and health. If that takes priority, then you’ll understand.

Battery Life: Putting Everyone to Shame

This is the one area where the Withings ScanWatch Horizon puts those functionally superior smartwatches in their place. I’m used to charging the Apple Watch nightly, but I’ve also tried several fitness trackers, like those from Fitbit, Samsung, and Garmin, that managed to get upwards of a week. Other smartwatches, like those from Samsung, Mobvoi, Motorola, and Fossil to name a few, tend to top out at a day. True fitness trackers, however, aren’t as demand and can last more than 3 to 5 days on average, but it mainly depends on whether or not it has an actual touchscreen display. 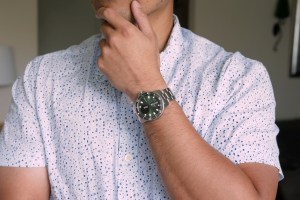 Impressively, I got three full weeks out of a full charge from the ScanWatch Horizon. Even though it’s a week shy of its 30-day rating, I’m still nonetheless impressed because for once in my life, I can go more than a couple of weeks without recharging.

Due to its long battery life, I had to make sure that I remembered where I kept the proprietary magnetic charger. So yeah, you’ll want to do the same because I didn’t expect the battery to be this good.

Don’t let its $500 cost dissuade you when you compare it to the $399 starting cost of the Apple Watch Series 7. That’s because choosing a titanium casing brings the Apple Watch’s cost up to $799. As you can tell from my Withings ScanWatch Horizon watch review, I had a great experience testing out this hybrid timepiece.

Knowing that, the Withings ScanWatch Horizon isn’t for everyone. I know that it still won’t pull me away from using my Apple Watch Series 3 full time, but I can totally see how its premium style and focus on health can be an attractive quality for others — especially when they don’t want to be bothered or burdened by all of the features that accompany traditional smartwatches.

Yes, we think this hybrid watch is absolutely worth the investment for guys who love watches and value great design. As I’ve mentioned, it still has some basic smartwatch functionality and is pretty good at tracking, but where it really stands out is in overall aesthetics and design. If you want a sleek-looking smartwatch that can be worn for business or casual attire, it’s a far more worthy option to match up with various styles than a traditional smartwatch. It’s not blatantly a smartwatch, which is another quality you’ll appreciate. 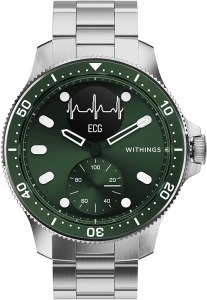