Ready or not, Amazon’s autonomous flying drone is ready for takeoff. The Ring Always Home Cam is a flying drone and security camera that can independently patrol your home while you’re away, and it’s just one of the new robots Amazon is rolling out to the world.

Amazon hosted a virtual event on Tuesday, September 28 to reveal an array of new gadgets and services. For your smart home, there’s the new Echo Show 15. For parents, the ‘Hey, Disney!’ voice assistant brings the House of Mouse to your Alexa speaker. For home security, the newly updated Ring cameras can now be combined with third-party security monitoring to keep your home (and Amazon package deliveries) safe. During the live event, Amazon also revealed three new robots — the Ring Always Home Cam, the Amazon Glow and the Astro.

For early adopters eager to order the latest tech gadgets, there were a lot of exciting announcements. However, for the Amazon skeptics of the world, we’re guessing the words “Amazon’s autonomous flying drone” sound like something out of a dystopian science fiction story.

Welcome to the future — how do you like it?

We’ve got details on all of the new Amazon robots below. All three devices are available on an invitation-only basis, and we’ve got info on how to request an invite for each new product.

During Tuesday’s virtual event, Amazon revealed three new products that can be described as robots. Only one of these products, the Astro, is explicitly marketed as a household robot, but the Always Home flying security drone and the Amazon Glow, a moving, interactive children’s toy, also look like robots to us.

First up, the Astro, an anthropomorphized household robot designed to integrate itself into your household. They even gave it eyes. 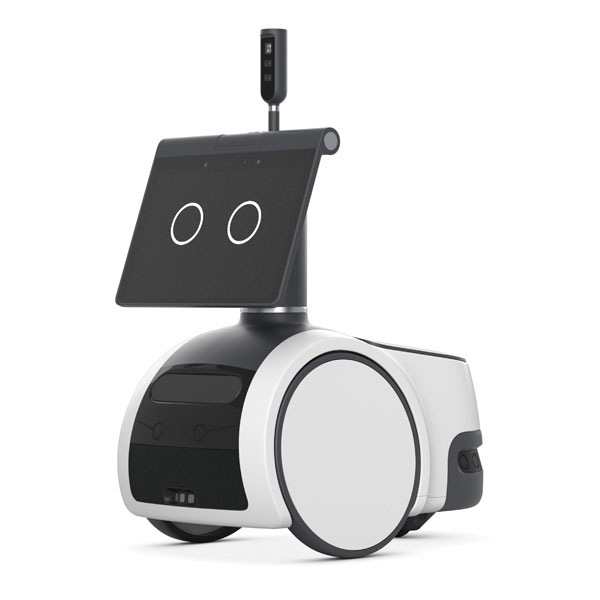 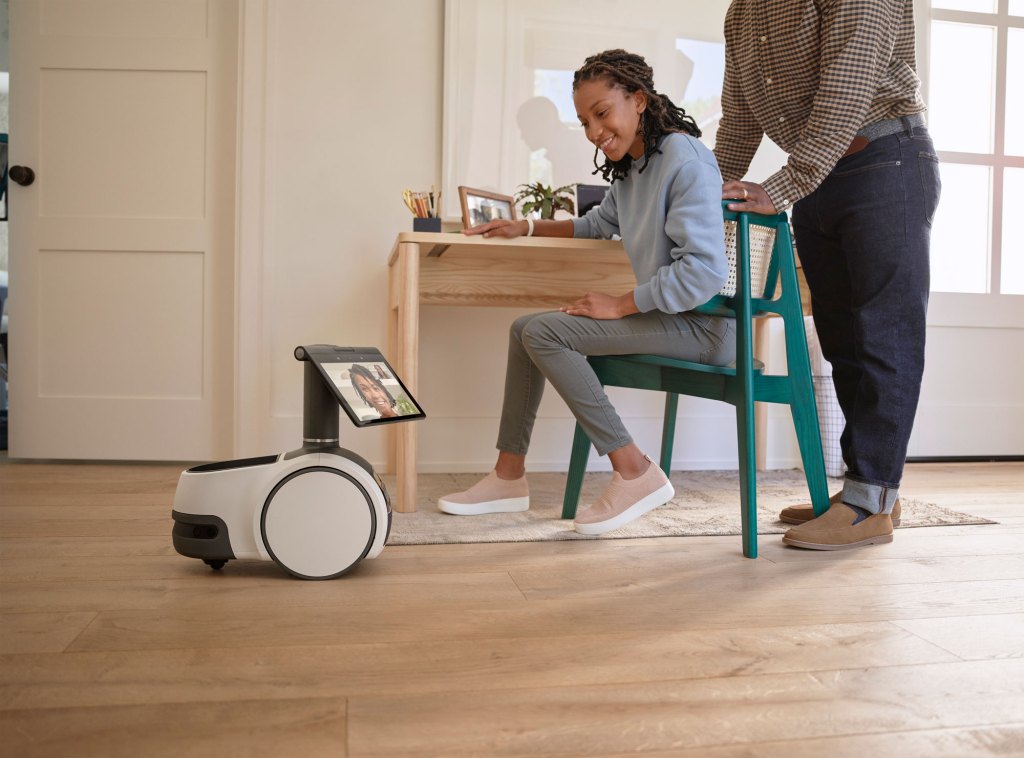 According to a press release, “Astro is a new and different kind of robot, one that’s designed to help customers with a range of tasks like home monitoring and keeping in touch with family. It brings together new advancements in artificial intelligence, computer vision, sensor technology, and voice and edge computing in a package that’s designed to be helpful and convenient.”

The robot is intended to act as a sentry or guardian, patrolling the home and monitoring its environment for intruders. “Astro can move autonomously around your home, navigate to check in on specific areas, show you a live view of rooms through the Astro app, or even send alerts if it detects an unrecognized person.” For caregivers, Astro will also be able to help observe elderly relatives and connect them with services in an emergency.”

This new security robot will not be widely available in 2021. Amazon will allow a limited number of early customers to purchase the robot later this year for $999.99, with six months of Ring Protect Pro included. Interested customers can request an invitation via Amazon’s website.

Next up, the Always Home security drone. Amazon actually first revealed this device exactly one year ago during a similar event. Now, Ring customers can request an invitation to be one of the first customers to receive the Always Home drone. Amazon says that the Always-Home drone is the first of its kind, an autonomously flying camera that can move around your home. When activated, the drone leaves its docking station and explores the surrounding area, and customers can remotely watch video from the camera with their devices. (The drone’s camera will be covered when it’s not in use.) 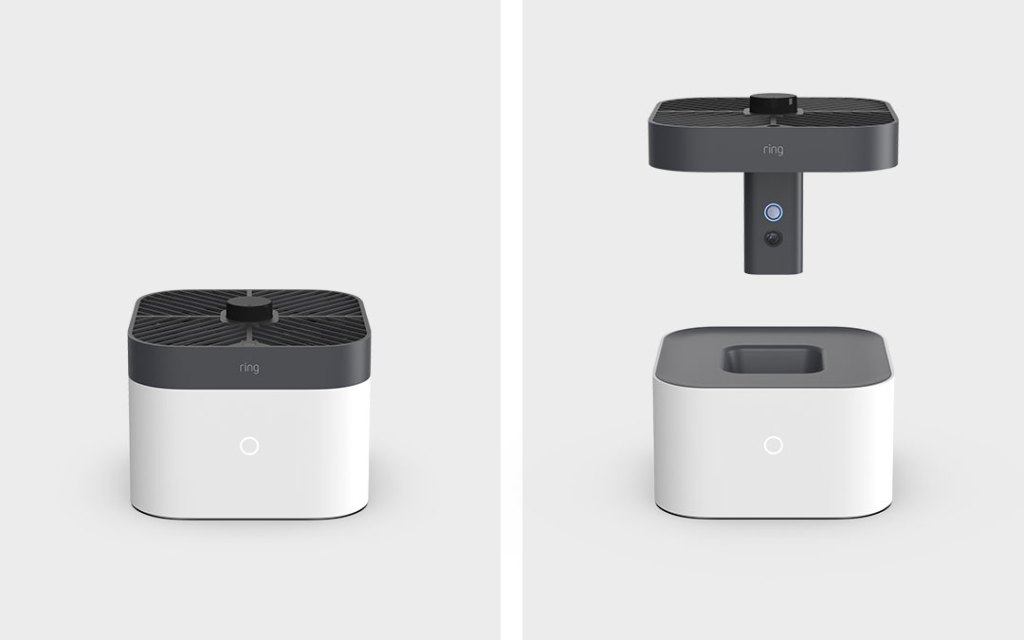 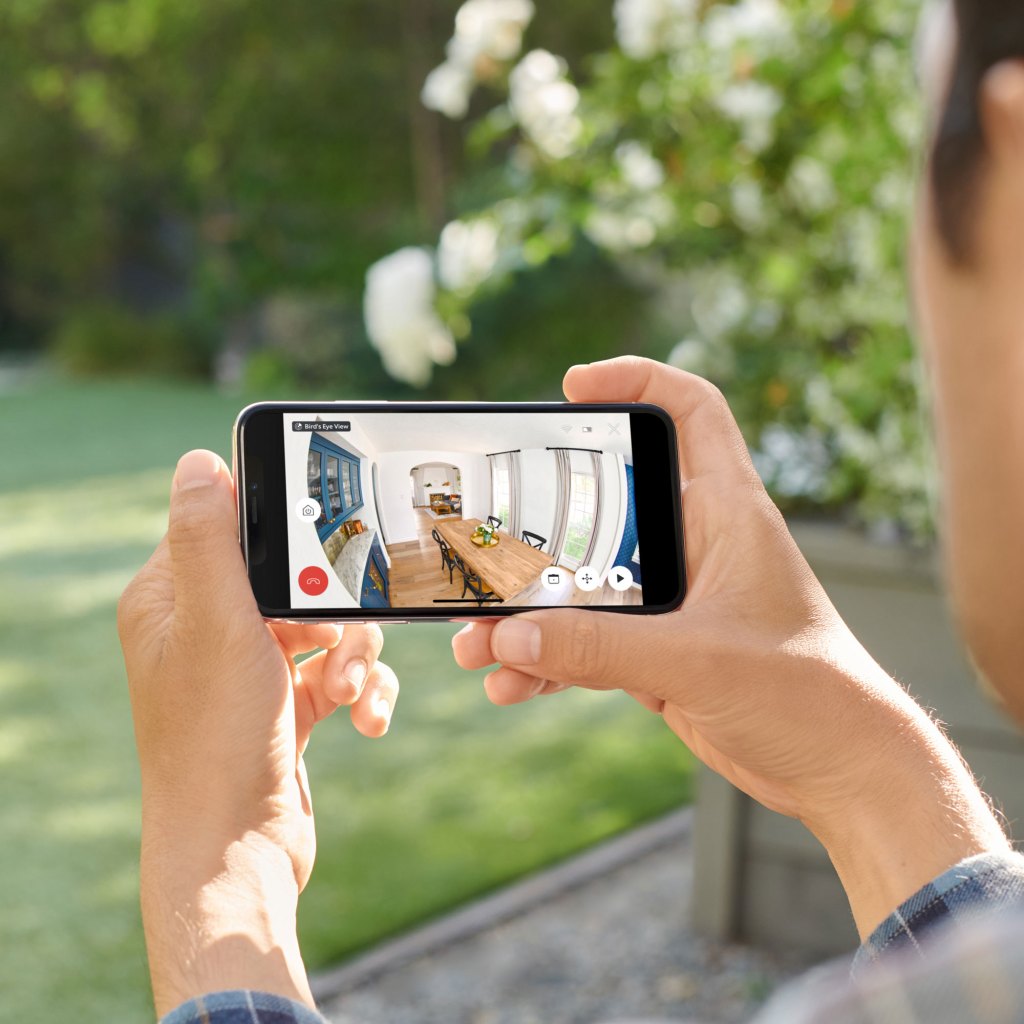 Last year, we wondered if the Always Home security camera was “too paranoid for its own good,” and if Amazon was “reading the room correctly.” At a time when many consumers have very legitimate privacy concerns, a flying Amazon security drone just didn’t seem like the kind of product the world needed. Of course, how you feel about this product will depend entirely on how much you trust Amazon.

While the company has plenty of critics, it is also consistently rated as one of the most trusted institutions in the country.

Finally, Amazon introduced Amazon Glow, an interactive video chat device for children. This product is really unique and a bit of a challenge to explain, so we’ll leave it to Amazon. In a press release, the company says that Amazon Glow is a “new interactive device that brings a new magic to video calls and transforms the way kids connect with remote loved ones by participating in activities together. During video calls on Glow, kids see remote loved ones on a dedicated 8” display while reading stories, playing games, and creating art on a 19” touch-sensitive, projected space. At the same time, remote family and friends see the child on a tablet and participate in the same activities using the free Glow app. Glow creates a virtual experience that feels like being together in the same room.” 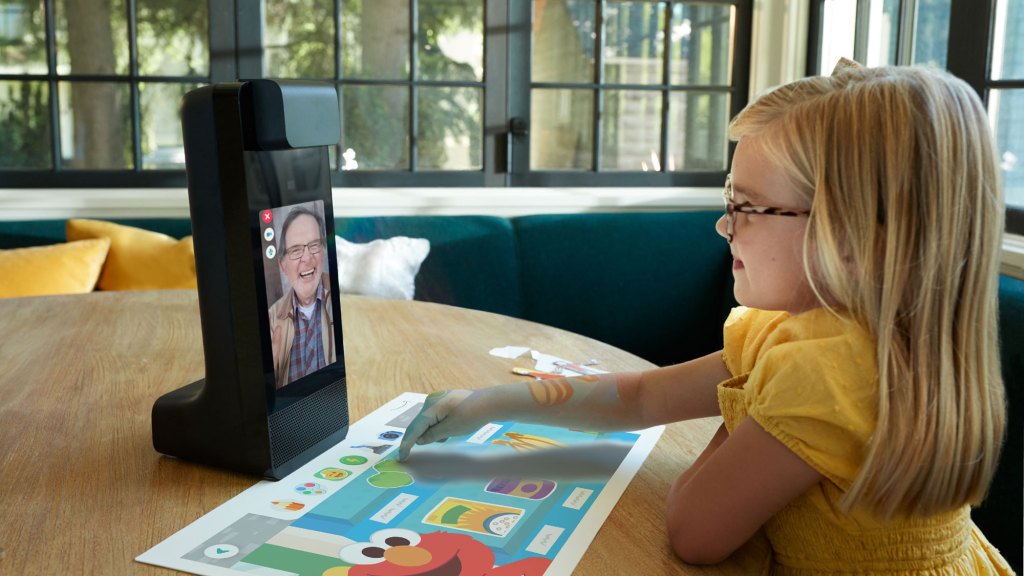 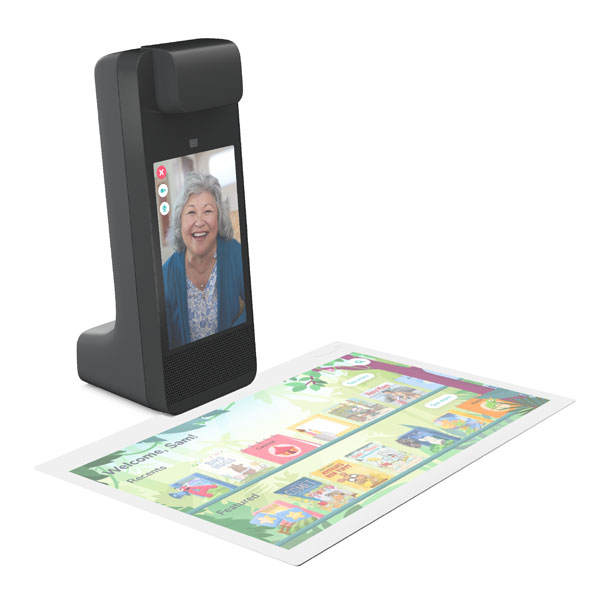 If you want to be pessimistic, you could say that this is simply too much technology for kids. On the other hand, this kind of device would be welcomed by many kids and grandparents looking for ways to connect remotely. Limited Amazon Glow devices will be available for the early access price of $249.99. Interested customers can apply to purchase one of the first Glow robots via Amazon.

Like the other new Amazon robots, the Amazon Glow is somewhat of a Rorschach test. Where some people will see dystopian overreach, others will see a really cool new gadget to test out.

Yup, Amazon Is Taking Over the World

Amazon is the undisputed king of e-commerce. If you aren’t buying something via Amazon itself, you might very well be shopping on a website hosted by Amazon Web Services. Theoretically, if you wanted to avoid supporting Amazon completely, you’d have to live like a doomsday prepper and go completely off-grid.

Jeff Bezos may have started Amazon to sell books online, but now the company sells virtually everything, including many Amazon-branded gadgets such as the Echo Dot, the Ring video doorbell and the newly announced Amazon Omni Smart TV. In addition, the company integrates those devices with an array of other services. Your Ring video doorbell also comes with a home security package, which in turn integrates with your Echo speakers and displays. Your Amazon Fire TV stick makes it easy to stream movies and TV shows via Prime Video. Your Amazon Halo fitness tracker can identify poor sleep patterns, and if you want to buy melatonin supplements, they can be delivered for free with two-day shipping thanks to Amazon Prime.

Basically, there’s an Amazon device and service for all aspects of our daily lives.

For dedicated Amazon customers, these services and devices are extremely convenient. For Amazon skeptics, they’re a privacy nightmare. Like any giant company that becomes ubiquitous — think Disney, Apple and Microsoft — Amazon has plenty of critics. The company has been criticized for its labor practices, antitrust concerns and privacy issues. 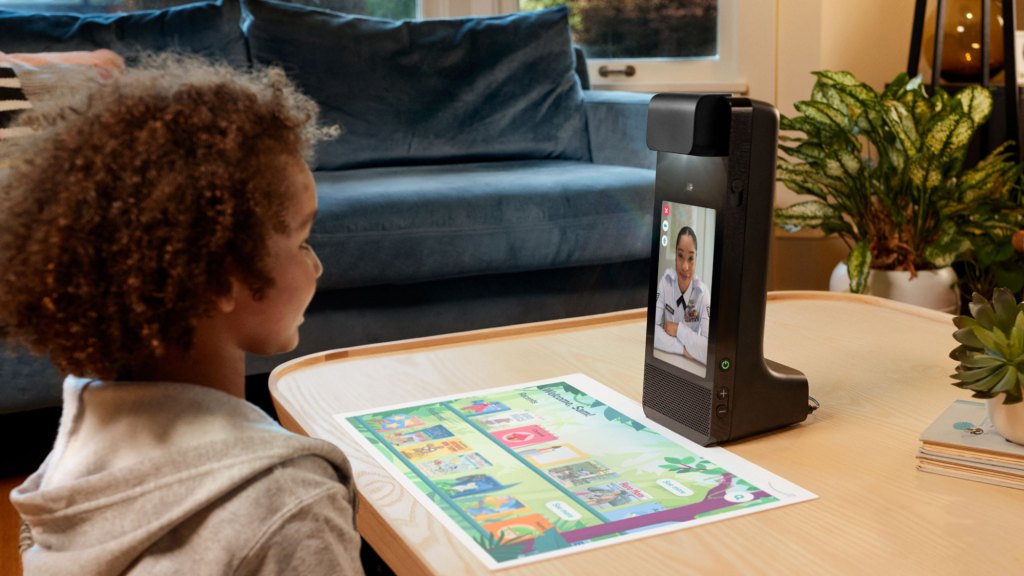 Many people are absolutely convinced that their smartphones and Echo speakers are listening to them 24/7/365. Virtually everyone has experienced the phenomenon of casually mentioning a product in conversation, let’s say Tic-Tacs, only to turn on their phone and instantly see a targeted ad for Tic-Tacs.

We have to face a hard truth: you can hold onto your privacy or actively use a smartphone, but you can’t really do both. Our phones, laptops, smart speakers and wearables are tracking our location, shopping habits, contacts and behavior all day long. Check the wrong privacy setting on the wrong app, and there’s no telling what kind of data you’re signing away to the highest bidder.

In short, it’s too late to worry about your privacy — you already gave it away.

Full disclosure: SPY.com probably wouldn’t exist without Amazon. As an e-commerce website, SPY makes money via the Amazon Associates program. When a reader clicks a link on a SPY shopping guide and purchases a product, Amazon pays us a commission on that sale. It’s easy to find Amazon critics online, but we’re hardly in a position to judge Amazon.

If you live in the United States, you’re a consumer. And Amazon makes it very, very easy to consume.

With its new and improved robots, drones, voice assistants and security systems, Amazon is all around us. You can choose to embrace our new robot companions, or you can scorn them, but there’s no escaping them.

Do you want to be one of the first people to own your very own Amazon robot? Then head to Amazon, where you can request an invitation to become one of the first Astro customers. Priced at $999, this household robot assistant can move freely throughout your home.

How To Sign Up for the Ring Always-Home Drone Camera

First revealed in September 2020, the Ring Always-Home Camera is almost here. The Always-Home camera is an invite-only product for the time being, and interested Ring customers can request an invitation via the Ring website.

Where Can You Buy the Amazon Glow?