Long before it came out, I remember the rumors that Amazon was working on a wall-mounted version of its popular Echo Show smart displays. And when Amazon first previewed the device in 2021, SPY.com predicted it would be one of the most popular gadgets of the year. It was pegged as a command center of sorts for the smart home, a device in plain sight for everyone to interact with and control the entire home. Well, now that device calls my standing desk its permanent home.

So does it live up to our expectations?

The short answer: yes it does. We expect Amazon to improve on the Echo Show 15 in future iterations and we wish it had better third-party support, but it’s a smart home hub that’s well worth the $250 price tag.

Below you can read SPY’s full review of the new Echo Show 15 including pros and cons, specifications, features we loved, sound and display quality, and a few lower-priced alternatives. 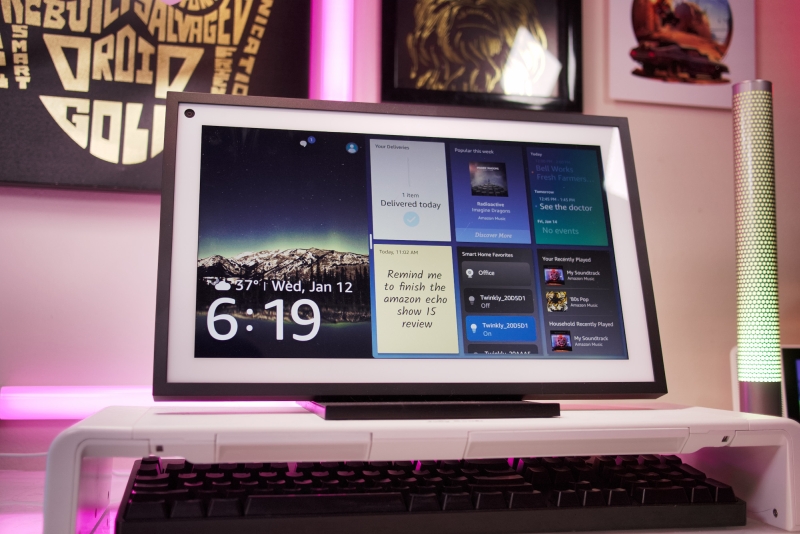 The biggest decision I had to make when installing the Amazon Echo Show 15 was whether or not I should wall mount it. I initially placed it next to my fridge in the kitchen using the included wall-mount reference sheet but realized later that the 5-foot power cord just wasn’t long enough to reach the nearest outlet (the first con so far). If you’re not the handy type, don’t fret because the reference sheet and included screws make it a breeze to install.

One thing you’ll need to be mindful about, though, is how tall some people are in your household because the camera’s placement doesn’t always put them in the center of the frame. That’s partly why I ended up placing it on my office desk using the add-on tilt stand that you can buy for $30. Since I spend most of my time in the office, it’s a logical placement that offers me useful information at a glance, but larger households will be better served by wall mounting it in the kitchen or living room.

You’ll go through some initial prompts before getting it set up, including the option of setting up Visual ID facial recognition, which offers a more personalized experience — like receiving calendar notifications specific to you. Like I said, the only conundrum you’ll face here is figuring out where you’ll want to place it. 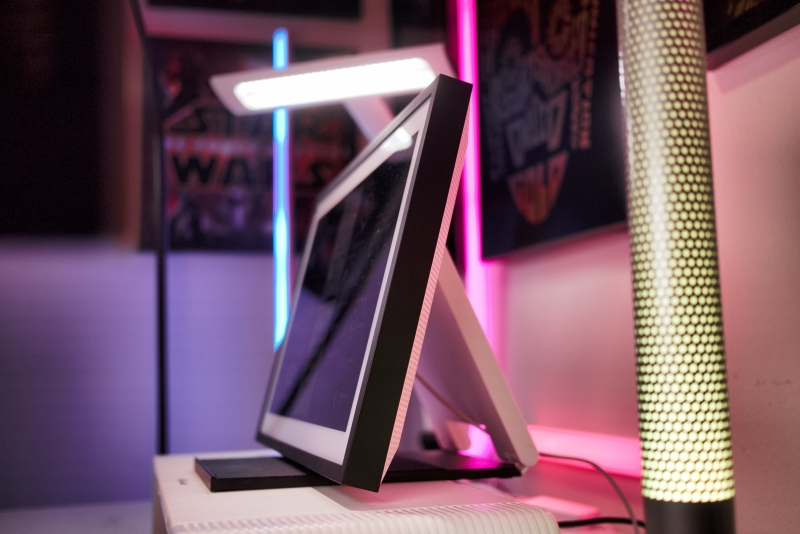 Let’s face it, Amazon has yet to put together a design that would put it in the same class as Apple (or even in the same class as Microsoft, for that matter). Not surprisingly, the Amazon Echo Show 15 continues this trend of being on the generic side. It’s a plain and boring-looking slab that can be mistaken for an ordinary monitor on a table.

The thick bezels surrounding the display are one of the more distracting design elements. And in an age of ultra-thin TVs and super-slim desktop computers, the Echo Show 15 is 1.5-inches thick and weighs a hefty 4.8-pounds. I just wish it were sleeker and those bezels were trimmed down a bit, since it would certainly add more charm to its otherwise uninspiring design. 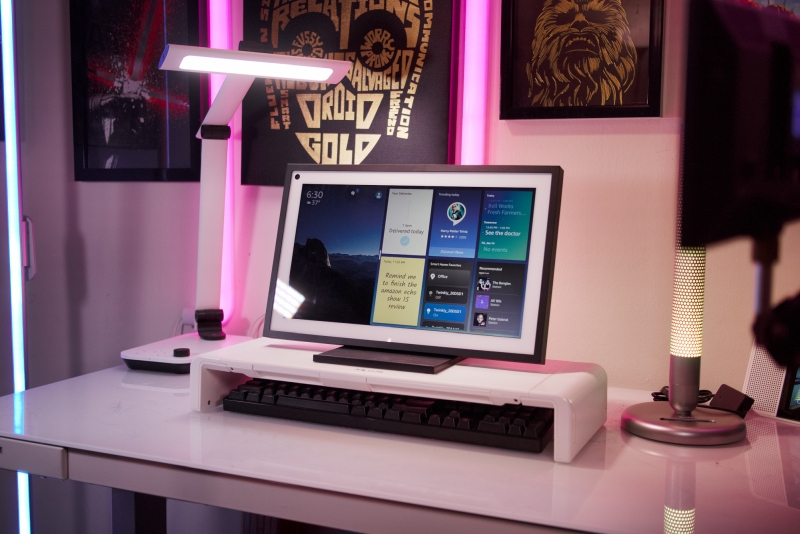 The Echo Show 15 is Amazon’s largest smart display to date with its 15.6-inch 1,920 x 1,080 touchscreen display. The quality of the display surprised me, and t’s a high-quality-looking panel that’s detailed and accompanied by rich colors. Viewing angles are also excellent, making it an attractive-looking digital photo frame to showcase all of your favorite memories. The only complaint I have is that it needs to expand its support of other popular photo services, such as Google Photos or Shutterfly. Instead, you’re limited to Facebook and Amazon’s own Photos service.

Given that there’s substantially more real-estate on this smart display than anything else Amazon has released, I really like how Amazon has arranged the home screen to include widgets — some of them are especially handy, like the sticky pad to jot down reminders. It also arranges them in a dynamic way that makes it feel like they’re continually shifting. If there’s one thing to absolutely love about the Echo Show 15, it has to be its gorgeous-looking display. 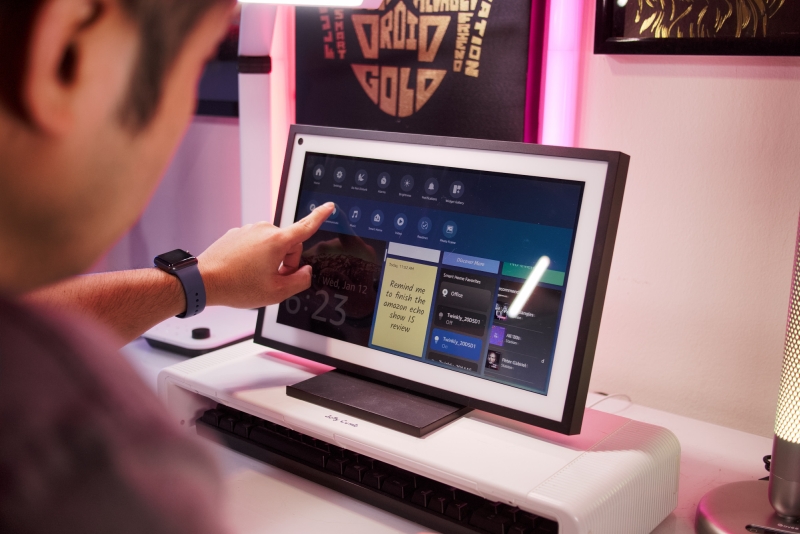 Besides offering support for a variety of widgets on the home screen, the Echo Show 15’s experience isn’t a dramatic departure from the company’s other smart displays. By swiping down from the top edge, you can quickly access some of the smart display’s most useful functions. For example, I can instantly get a live view of one of my security cameras by pressing the smart home icon.

While it begs for physical interaction because it is a smart display, you’re not limited to just swiping through its menus. That’s where voice commands come in handy with Alexa — I’m able to do just about anything by speaking the command.

I can understand why it would be most ideal to place the Echo Show 15 in a community setting, such as the kitchen where family members congregate and go about their business. With one quick glance, you can see reminders on the sticky pad, check up on Amazon packages are on the way, and even preview who’s at the front door when the doorbell is pressed. Heck, it still achieves the same utility in my office!

The only downside is that it caters to Amazon’s ecosystem first and foremost. Watching YouTube videos is still a process, even when you ask Alexa to try and play a video because there’s no native app for it. You’ll simply be greeted by a web browser that points to YouTube, where you’ll then need to search for content on your own. It’s not intuitive at all, and given YouTube’s popularity, you would think this would’ve been addressed by now.

I also thought about how neat it’d be if you could somehow use the Echo Show 15 as a secondary screen, like being able to mirror something on my smartphone — or become an extension for my laptop. Unfortunately, you won’t find that functionality here, which makes sense because it would undermine its core functions as a smart home hub.

Even though it doesn’t degrade the overall experience in a tremendous way, I notice that the Echo Show 15 can be a bit tedious with its performance. In particular, there are jittery movements with its performance that can be distracting, such as whenever I scroll through the library of Prime Videos. It’s not terrible like I mentioned, but I would’ve preferred for it to be more fluid. 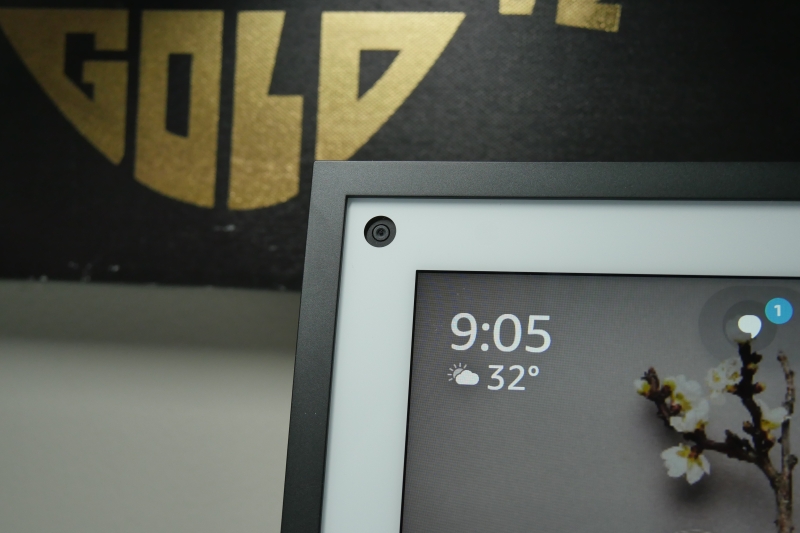 Positioned at the upper left corner of the display is a 5-megapixel camera, along with a latch above it that slides a cover over the lens — perfect if you’re paranoid about Big Brother watching. If you want to mute the microphone, there’s another button next to the latch you’ll need to press.

With the camera, the Echo Show 15 can video chat through the Alexa app. Just like Amazon’s other smart displays, it’s perfect for this funciton, but it lacks the room tracking function you find in the Echo Show 10 (3rd Gen). It’s not a deal-breaker in any way, even if you happen to have multiple people in frame because its field of view is wide enough for everyone to fit in the frame with ease.

Image quality is average at best, with the best results when there’s enough ambient lighting around. When it’s dark or dimly lit, there’s a noticeable degree of degradation. Despite this, the best part about having a camera on a smart display like this is the peace of mind you’ll get. For example, I frequently use the ‘drop-in’ feature to see if I forgot to close the window in my office.

This is all fine and dandy, but these functions are widely accessible on Amazon’s other smart displays.

Audio aficionados won’t be blown away by the sound quality out of the Amazon Echo Show 15. Sure, it’s wielding dual 1.6-inch full-range drivers, but the results aren’t anything outstanding. It suffices for the occasional video chat session, but I wouldn’t say it’s meant to be a showcase for playing music.

That’s because it’s lacking in depth and power, often sounding a bit tepid for my taste. I prefer the power and heart-pounding bass I get from the Echo Show 10 (3rd Gen), which the Echo Show 15 is clearly lacking. I would go so far as to say that its performance is probably closer to the Echo Dot (4th Gen).

The Verdict: A Great Smart Display for the Amazon Eco-System

Amazon has often tipped the Echo Show 15 as being this command center of sorts in the home. It’s there to some degree, but it can benefit from adding more third-party support. If you love Amazon Alexa, use Amazon’s security cameras and regularly order from Amazon Prime, then this is an excellent smart home display. We expect some of the drawbacks to be addressed in future iterations of the Echo Show.

Apart from its clunky looks, the $250 priced Echo Show 15 can undoubtedly be a commander center where relevant information and smart home controls are accessible to everyone — just as long as it’s strategically positioned in a place where many people have access to it.

So Should you buy it?

Yes. It’s not perfect as I mentioned, but it offers enough utility as a hub to accommodate and coordinate a growing family. 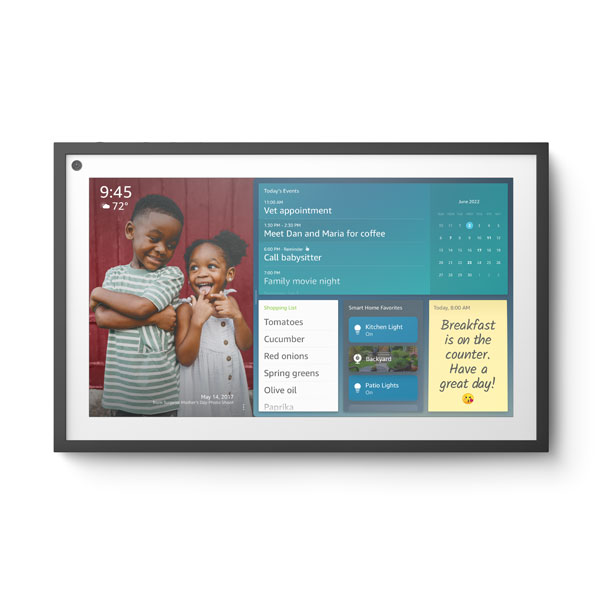 How long will it last?

It’s solidly constructed, despite the bland overall design. Since it’s meant to be stationary, it’s unlikely to incur any damage apart from normal wear and tear. Amazon offers a 1-year limited warranty that covers parts and labor due to defects, but you can purchase an extended warranty that could cover it for upwards of 3 years.

Without question, the Amazon Echo Show 10 (3rd Gen) is its biggest competitor because it’s priced identically at $250. It has more of an advantage in my opinion because of its ability to rotate its display a full 360-degrees, which is handy because you access the camera on it to pan around the room. It also has a superior sound system in place that puts the Echo Show 15’s performance to shame. 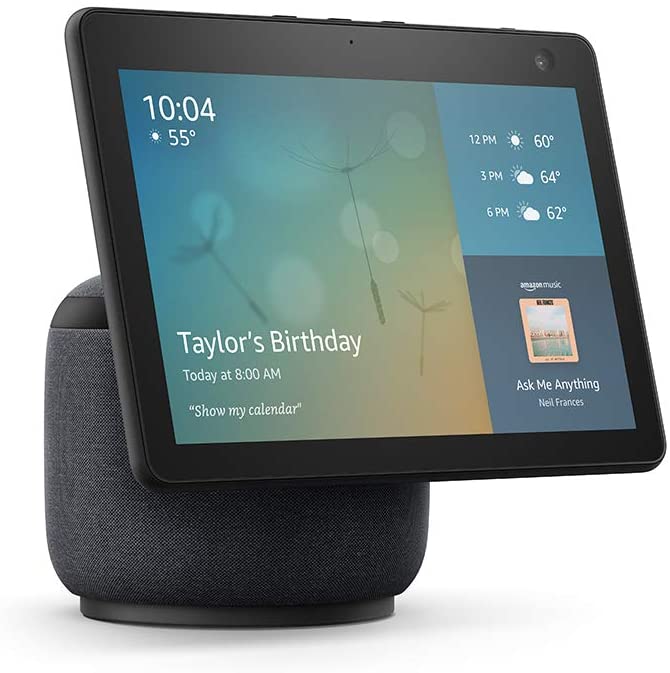 Now, if you’re a Google user, the closest thing to match this is the Google Nest Hub Max. It’s your traditional smart display, but I love how its display realistically emulates the look of a traditional picture frame with the help of its Ambient EQ technology — a feature that automatically adjusts the color temperature and brightness of the display for a more realistic look. 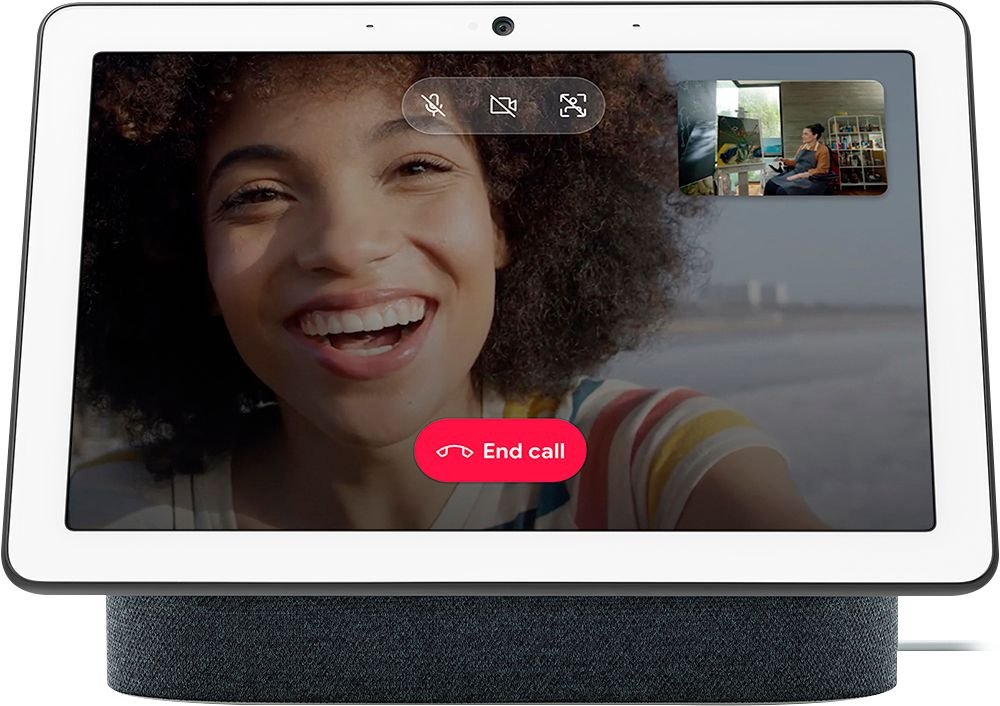 Don’t need all of those smart functions and simply want a digital photo frame that you can mount on your wall? The Lenovo Smart Frame is sure to garner attention with its massive 21.5-inch IPS screen. Just know that it’s a strictly Google Photos affair with this digital picture frame. 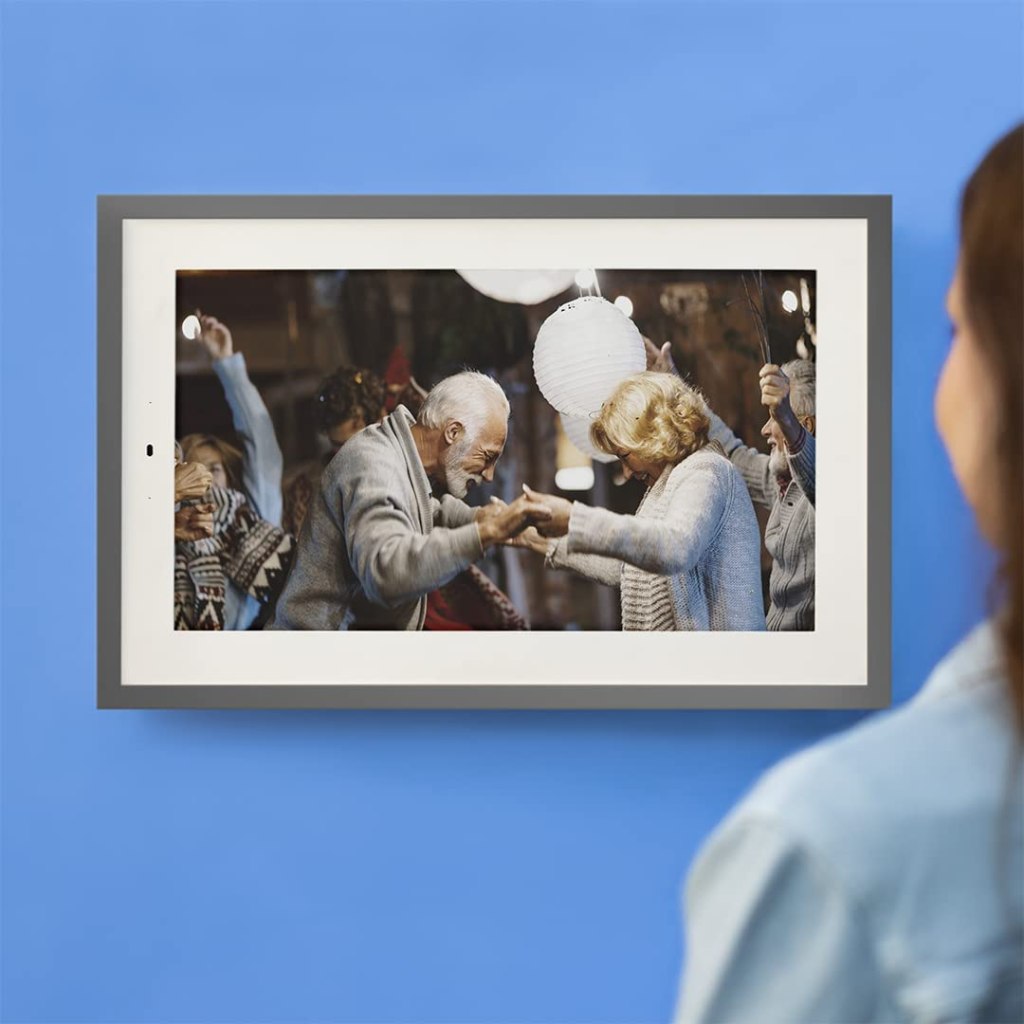