After spending 20 years mastering the best robot vacuums, the top tech and home appliance companies have turned their attention to pushing cleaning bots forward. And over the last few years, we’ve not only started to see robot mops, but also the rise of the hybrid robot vacuum/mop, which combines wet/dry cleaning into a single device. Now, in addition to saving you time, it also saves you space.

After finding success with the Eufy RoboVac L70 Hybrid robot vacuum/mop, Anker is back with the RoboVac G30 Hybrid which offers the same core functionality at a more accessible price point. 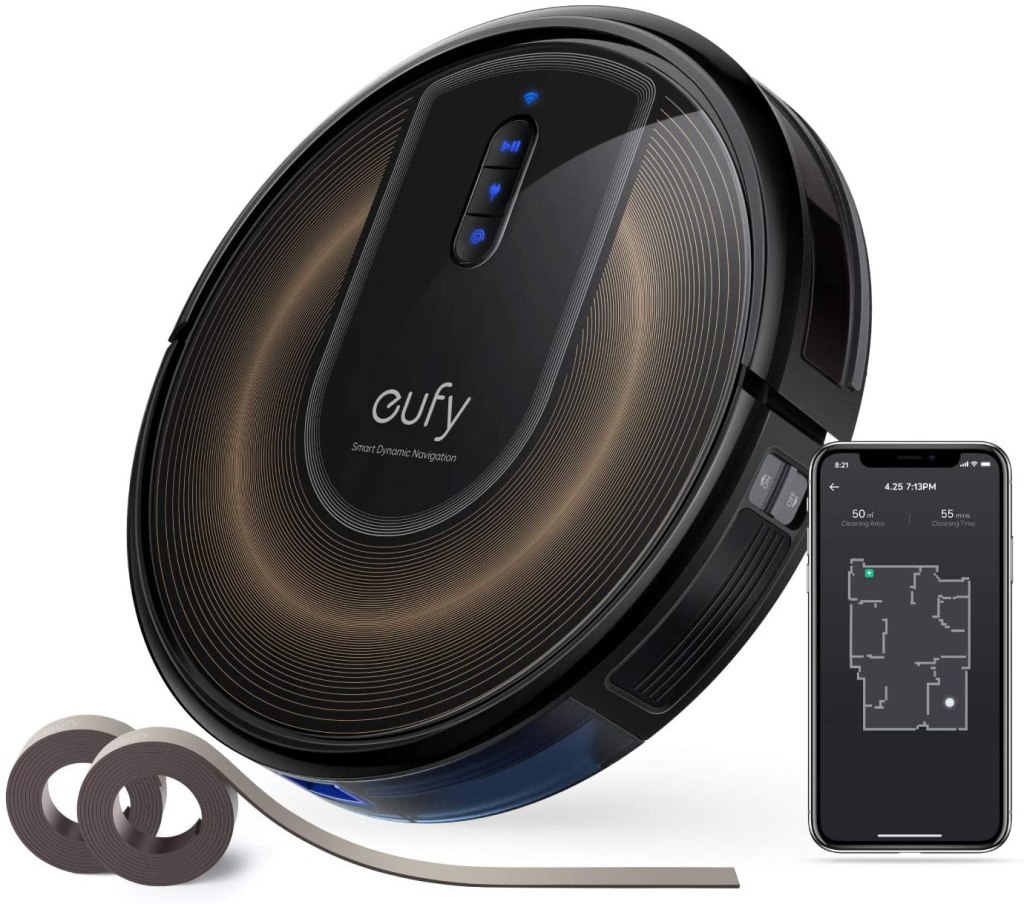 This includes a dynamic smart navigation system that can map out your home on the fly, a vacuum that can generate 2,000 Pa of suction and effectively clean along edges, and, thanks to a detachable and reusable pad, mop your floors.

Furthermore, through its companion app, this vacuum has the ability to clean on a schedule, adjust its power level and interface with your Google Assistant or Alexa smart home hub to activate with a simple voice command.

But is this a product that offers bang for the buck, or simply underwhelms? Keep reading to find out.

The entire point of buying a cleaning bot for your home is to make your life easier. So you don’t want something that requires so much effort to set up and use that it’s more work than just pulling out your vacuum.

Luckily, using the Eufy RoboVac G30 Hybrid is a breeze.

Setting this robotic vacuum/mop up mostly consists of inserting the dustbin and clipping the sweeper brush to the bottom of the vac. Once you download the app and connect the RoboVac G30 Hybrid to your WiFi network, you press one button and the rest takes care of itself. The RoboVac G30 Hybrid will quietly go about its business, traversing all the available floor space that it can. (It’s also worth noting that the RoboVac G30 Hybrid is primarily designed to be used with its smartphone companion app to get the most out of its features. Without that, its functionality becomes very basic.)

With no configuration or setup beforehand, the camera and mapping system on this vacuum impressively and thoroughly charts out a course and is surprisingly capable at maneuvering its way into any open space that is wide enough for it to fit.

The most I did in terms of moving things around beforehand was move some shoes and a plant that were blocking areas I wanted to be vacuumed. Otherwise, the Eufy made its way across rugs and cords with aplomb as it cleaned.

I moved recently and held off on vacuuming as I took my sweet time getting everything unpacked. This meant that by the time the RoboVac G30 Hybrid arrived, my hardwood floors had unsurprisingly accumulated a decent amount of dirt, dust, debris. I figured the RoboVac G30 Hybrid would get a fair amount of it, but that I’d ultimately have to use a non-robot vacuum at some point.

Despite there being small pieces of paper and plastic, plant stems and leaves, pebbles, crumbs, dust bunnies and more strewn across the floors, the only thing remaining post-clean was a single dime. And all of that happened in 40 or so minutes. 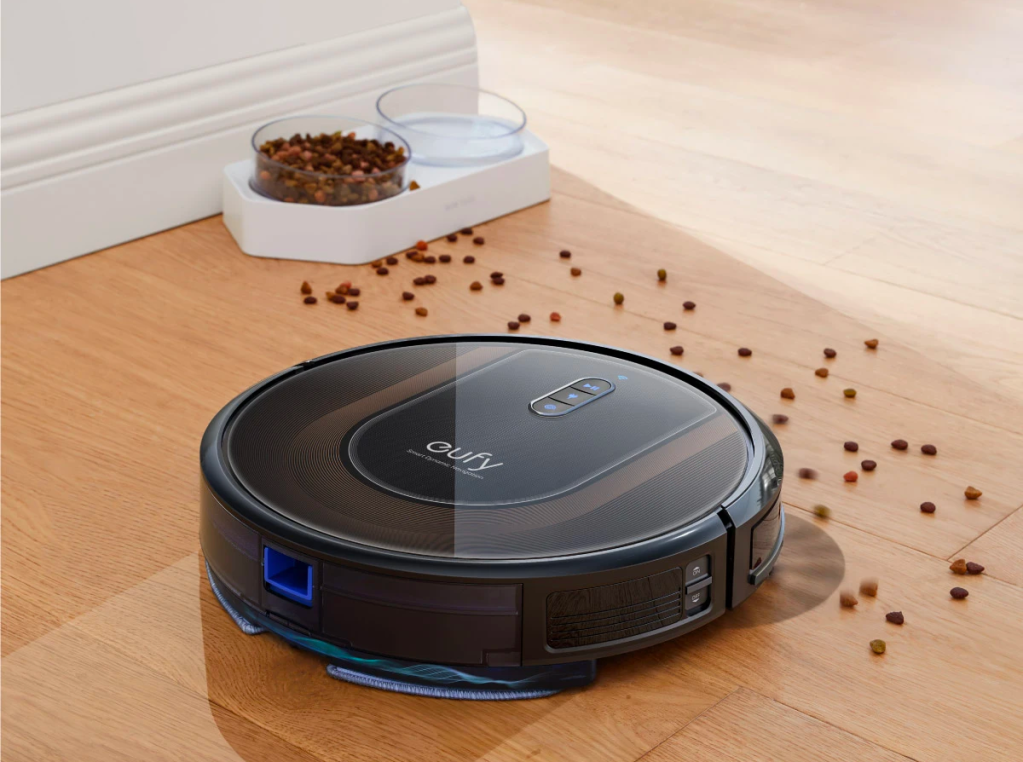 One caveat worth noting is that the Eufy RoboVac G30 Hybrid did not suck up everything on the first pass when it was set to the lowest power level for suction. This shouldn’t come as a huge surprise since there was a lot to clean.

Luckily there are three different power settings you can easily toggle from the app. After giving the floors another pass on the max setting, there wasn’t a particle in sight, not even along the baseboards.

It’s hard to say whether it would have picked up everything on the first pass if the suction power level had been set to Turbo. But considering you don’t have to do anything except push a button, it’s not really that big of a deal to dispatch it a second time. Plus, the thing has two hours of battery life, so a second go in a small home or apartment won’t cost a lot of juice.

Given the price, there’s a lot to like about the RoboVac G30 Hybrid compared to other hybrids and the best robot vacuums. But it has some noticeable limitations, and while Anker (to their credit) doesn’t try to hide those limitations, there is a point where they are felt.

The biggest of these qualms comes down to the RoboVac G30 Hybrid’s mop itself. While, yes, this is a mop in name, it is little more than a rag that is able to keep itself damp as it moves across the floors. The RoboVac G30 Hybrid is not built to work with cleaning solutions, and it doesn’t have any mechanism to provide any sort of cleaning action. Rather than clean dried-up spills and mud, the mop on the G30 Hybrid is really designed to collect remaining dust after it vacuums. And in this context, it’s a nice feature to have.

This means that if you want to mop your floors, you either need to move your rugs, cords and other water-sensitive objects, or you need to affix strips of metal to your floor. Neither is particularly convenient or optimal for a quasi-mop mode.

Secondly, the RoboVac G30 Hybrid doesn’t get tripped up by rugs and objects often, but when it does, it really does. I have a medium-pile rug that tends to slide and bunch up, and for whatever reason, the RoboVac G30 Hybrid struggled to move over one corner of it (but only one corner). As a result, it would trap itself in one part of the room and I’d have to help it out.

Thirdly, when faced with the rats nest of cords under my desk, the RoboVac G30 Hybrd could not resist trying to make its way over them. There was enough of a tangle that I assumed it would treat it as an object and just move around it. But nope, it spent two minutes wrestling with them. And while it’s objectively impressive that it didn’t get stuck on the cables, I’m not sure that having to regularly do that would be great for its motor.

Finally, the charging dock for the RoboVac G30 Hybrid requires a pretty big halo of open space around it (three feet on either side and six feet in front) in order for the bot to easily return home. This means that if you have a limited amount of open space in your home or simply want to keep it in a discreet space, the RoboVac G30 Hybrid is going to struggle to dock after cleaning. Just to see what happened, I placed it in a nook that was just wide enough for the RoboVac G30 hybrid. While it sometimes returned to the dock without issue, there were other times where it just gave up and started wandering around aimlessly. I’m not sure why this works sometimes and not others, but it’s odd all the same.

The Verdict: A Very Solid Option for the Money

The Anker Eufy RoboVac G30 Hybrid is a really good robovac for the money. While it may not have the advanced mapping and object detection capabilities that more expensive robot vacs have, and doesn’t mop as effectively as other standalone robot mops or hybrids, it still delivers on everything it promises.

If this was priced any more than its current MSRP, we might expect a liiiiittle bit more from it. But the mop feature as it exists can still be useful, and there’s nothing truly awful about the RoboVac G30 Hybrid. As such, we definitely recommend the Anker Eufy RoboVac G30 Hybrid if it happens to pique your interest.