Brand recognition goes a long way in establishing consumer confidence. When it comes to robot vacuums, there’s no one with more brand recognition in the category than iRobot and its line of Roomba robot vacuums. They’ve been around for years, setting the pace and bar for innovations such as obstacle-avoidance technology, room mapping and efficient cleaning.

So what’s the best Roomba for 2022? SPY’s product reviewers tested the entire iRobot line of robot vacuums to find out.

Over the years, the company has released several different models, which can make it tough to know where they all land in the release timeline. Not only are we knowledgeable about all of iRobot’s happenings, but we’ve spent months putting the best Roombas to the test. Not only have we evaluated these vacuums side-by-side, but we’ve also compared them to popular robot vacuums from brands like Robo Rock, eufy by Anker and Samsung. Whether you’re considering one for a tiny apartment or for larger spaces, there’s a Roomba for you at various price ranges.

Keep reading for our in-depth Roomba reviews and to find the best Roomba vacuum for your home.

Read More: The 8 Best Wet/Dry Vacuums of the Year

The Best Roombas At a Glance 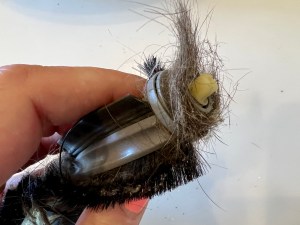 Best For: Cluttered rooms that require an intelligent robot vacuum to avoid obstacles while cleaning.

Why We Chose It: No other Roomba can match its ability to map out rooms, intelligently navigate and efficiently clean. 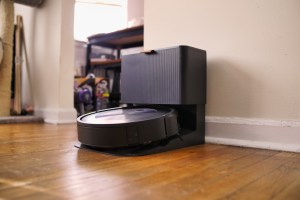 The priciest model isn’t necessarily the best model for most people. After testing all of the top Roomba models from iRobot, we believe that the best Roomba is the iRobot Roomba j7+, even if it’s not the most advanced or feature-rich Roomba for sale in 2022 (for the flagship model, see the s9+ below). So why do we believe the j7+ is the best Roomba of 2022? Because it’s relatively affordable but still offers next-generation tech that helps to better avoid obstacles while proving to us that it’s an excellent deep cleaner.

With the help of a camera, the Roomba j7+ is the first robot vacuum in the company’s portfolio to feature PrecisionVision Navigation. We were impressed by its ability to recognize and avoid objects in real time, including the fake poop we placed on the hardwood floor to see what it would do.

This excellent all-around cleaner picks up crumbs on hardwood floors and sucks up superficial debris from carpets. Furthermore, it comes with the sleekest self-empty charging base we’ve come across, making it much easier to store.

Best For: Thick carpets and plush rugs that have dirt deeply embedded.

Why We Chose It: Considered the flagship, it does the heavy-duty work of offering that deep clean feel wherever it goes. 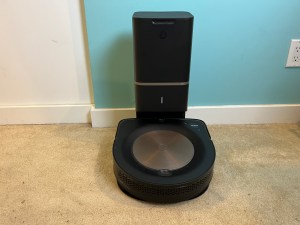 If price isn’t a major factor in your decision, then the s9+ is easily the best Roomba of the year. Still classified as the company’s flagship model, the iRobot Roomba S9+ is the most advanced self-emptying smart vauum from iRobot. It’s the top model for anyone that wants to get that deep-clean feel with carpets. That’s because it has the strongest suction in iRobot’s lineup, offering 40x the suction power of the Roomba 600 series. This was made more believable after we walked on our bare feet over the carpet where it had vacuumed. The difference was immediately noticeable.

Small pieces of debris embedded in carpets stand no chance, but it doesn’t get bogged down by hair or pet hair either because of its dual rubber brushes. Unlike traditional bristled-based brushes that other robot vacuums use, tangles caused by hair and pet fur are less likely to happen here because of how the brush is designed. Nevertheless, it’s always good practice to know how to clean a Roomba to get the most out of it.

Even though it lacks the Roomba j7+’s vision to see courtesy of a camera, the s9+ is still an impeccable robot vacuum that efficiently cleans thanks to vLSAM navigation.

Best For: Those who want an affordable Roomba and the smarts and self-empty bases of iRobot’s high-end models.

Why We Chose It: You get premium features without paying the premium cost. 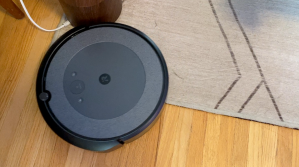 Roombas iRobot Roomba i3+ EVO is a notable recommendation because it’s the most affordable in the lineup to include a self-empty bin. It’s cheaper than both the Roomba j7+ and s9+ but doesn’t compromise on its cleaning performance and it has smart mapping too.

Depending on how much the Roomba i3+ EVO sucks up each time, you could go months before replacing the bag inside the bin. No one ever thinks about the nasty baddies hidden in all the debris it gobbles up, but the high-efficiency filter here captures and traps 99% of cat and dog allergens.

Compared to iRobot’s j-series and s-series robot vacuums, the i3+ is categorized more like a mid-ranger. We were impressed by how it efficiently cleaned and reasonably avoided some obstacles while it was navigating around during our testing.

Best For: College students who want an ultra-affordable robot vacuum.

Why We Chose It: You don’t have to spend an arm and leg for it, but it can still clean efficiently. 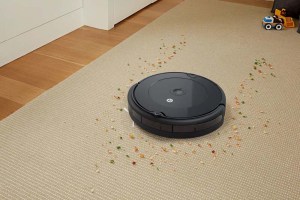 There’s no denying that robot vacuums don’t come cheap, especially those from the premier maker in the space. Out of the bunch, the iRobot Roomba 694 is the bot you’ll want to check out if you’re on a tighter budget. We didn’t put this one through our normal testing procedures, but we’re still including it and based its worth on user reviews.

Don’t think you’re getting an inferior model with fewer features and weaker overall performance. The Roomba 694 is designed to clean homes more smartly. You’ll find core features here like a three-stage cleaning system, an underside brush for carpets and a side-sweeping brush for hard floors, but it still has the intelligence to detect stairs to prevent it from falling.

Best For: Homes with pets that shed a lot of fur.

Why We Chose It: The dual multi-surface rubber brushes are less likely to get tangled from pet hair. 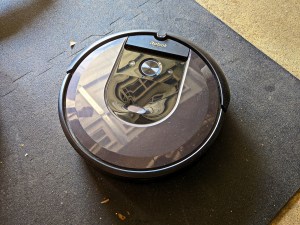 Pets in the home present another set of challenges when it comes to cleaning. However, we were really satisfied by how the iRobot Roomba i7+ fared in our tests, especially when it came to picking up pet hair. We didn’t see even a single tangle after the first cleaning. So for any animal lovers searching for the best Roomba for pet hair, we believe we’ve found it.

This certainly helps with the maintenance because traditional bristle brushes tend to be overwhelmed by hair, often requiring the brush to be removed and meticulously cleaned after each use. No one has time for all that, which is why we appreciate the Roomba i7+. On top of that, it also intelligently navigates around rooms with ease — and eventually disposes of its dustbin contents into the self-empty base when it’s done.

Best For: Hard floors that need a good scrub.

Why We Chose It: It’s one of the few models in iRobot’s lineup that can mop floors, although it’s not a true wet/dry vacuum. 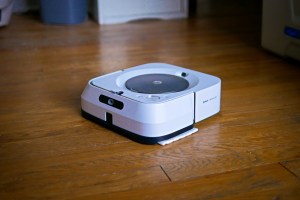 Unlike its competitors, iRobot prefers to separate its robot vacuums and moppers. That’s because this allows them to specialize in what they do best. With the iRobot Braava Jet m6, it ensures that your hard floors are spick-and-span clean.

Just know that it pairs best with a Roomba because you’ll want the floor to be clean and free of debris before sending the Braava Jet M6 to do its thing. Compared to other mopping robots that simply use water to wet an attached cloth, the Braava Jet m6 has a prevision jet spray on its front side to dispense the correct amount of cleaning solution so that floors are spotless, streak-free and dry fast.

How We Chose the Best Roombas: About Our Testing Process

For this roundup, we tested only the most recent models in iRobot’s lineup, which is why there are only six selections. Many of the older Roombas are still available for purchase through select retailers, but they often have older tech. If you’re looking for the best Roomba of 2022, then we recommend purchasing one of the models featured above.

Nevertheless, we tested each Roomba for one week, grading them on several areas. We will note that we’ve spent the most time with the Roomba i3+ and Roomba j7+, clocking in over six months of usage with each because of their excellent performances and features. To determine the best Roombas, we looked at the following areas in our testing process. 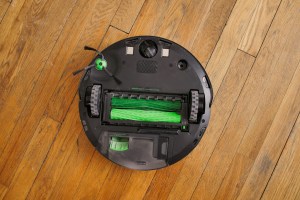 About The Author: John Velasco

John Velasco is the Tech Editor at SPY.com and has tested hundreds of smart home products during his decade-long career reviewing gadgets. Since joining SPY.com, he’s reviewed the best home security cameras, flagship smartphones and Amazon’s first smart TV. Previously, John worked as the smart home editor at Digital Trends. He’s also worked for Android Authority covering Android-related news as the editor-at-large, and at PhoneArena as the senior editor. John has been covering mobile and smart home tech for over a decade, and he is also passionate about virtual reality, drones and electric bikes.

What Kind of Navigation Tech do Roombas Use?

The vast majority of Roombas leverage iRobot’s patented vSLAM technology, short for visual simultaneous localization and mapping. Sonar and laser tech are used to provide Roombas with ‘vision’ to see what’s around it, thus knowing its location in proximity. With the help of this technology, Roombas can build a map of your home, which can then be tweaked to include virtual barriers and no-go zones to keep them out of those areas.

Is it Worth Buying a Roomba?

Yes, there’s a reason why iRobot’s line of Roombas are continually praised by both critics and users. The company continues to be the market leader in the space, releasing models that can intelligently vacuum without much supervision.

Do Roombas Work on Carpet?

All Roombas can vacuum carpets, but some are better equipped at providing a better, deeper clean. Most of their robot vacuums use a dual-brush system that resists tangles caused by long hair and pet fur. Furthermore, sensors on some of them can actually tell the difference between hard floors and carpets — often increasing the suction performance whenever carpet is detected.

How Much Is a Roomba?

There’s a Roomba for any budget. For those looking for an affordable model, you’ll want to check out the models in the 600-series. Conversely, the j-series and s-series of Roombas are premium offerings accompanied with the latest and greatest robot vacuum tech.

Actually, no. Roombas cannot mop. Instead, iRobot has a separate line of robots strictly for mopping — the Bravva. Currently, the lineup consists of the m, 200, and 300 series. These robots will only mop floors, with some specializing in hardwood floors because iRobot sells a special cleaning solution specifically for it.

What Is the Best Roomba alternative?

Other brands worth looking at include Roborock, Ecovacs, Shark, Neato, Eufy, LG, and Samsung. While the vast majority aren’t brands you might not have heard of, like Roborock, they all have various models that cover the gamut. It’s also worth mentioning that many of the competitive robot vacuums offer two-in-one functionality, as they can vacuum and mop simultaneously.

What Is the Best Roomba?

The answer to this question will depend entirely on your budget and the size of your home, as iRobot has both budget robot vacuums as well as flagship self-emptying models available. In terms of the most advanced features, the best Roomba we've tested is the iRobot Roomba S9+.