Stranger Things has kept viewers in their seats for four seasons now — the Season 4 finale of the Netflix sensation is a testament to that. But if you’re a diehard fan, you can rewatch all your favorite episodes in a more immersive manner, thanks to a collaboration between Govee and Netflix.

The Govee Stranger Things RGBIC TV Backlight takes the ambient lighting effects that we see in other TV backlights but sprinkles in a handful of special light effects to give your TV setup those Stranger Things vibes. Is it worth it, though? 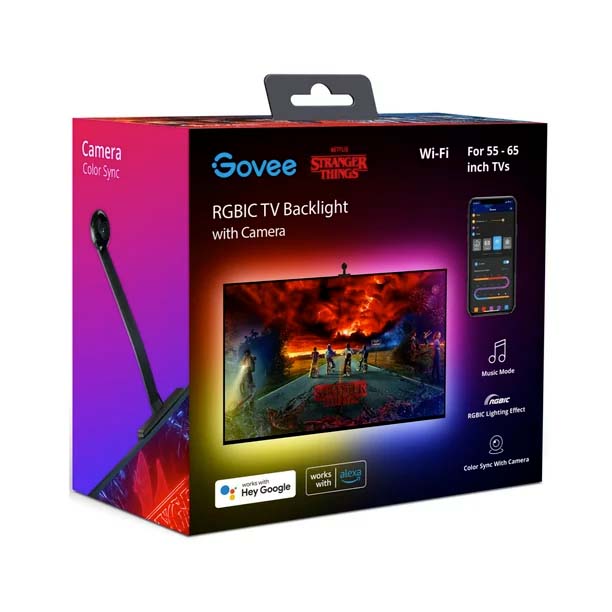 Anyone can install a set of strip lights, but it takes skill and creativity to set them up properly. Thankfully, installing the Govee Stranger Things RGBIC TV Backlight wasn’t too complicated on my 55-inch LG TV. The adhesive surface to the underside of the strip lights made it a breeze outlining the TV’s edge. The corners did present me with a little bit of trouble. 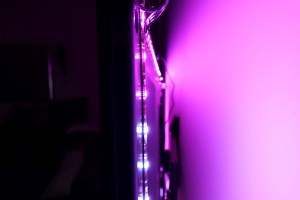 The light strips must curl at the corners to keep them aligned properly, so there are a few unwanted wires that stick out. Despite this, I found it easy to install and set up. After fastening the control box and camera to the back of my TV, it was good to go and ready.

Much like the other Govee smart lights I’ve reviewed, the Govee Stranger Things RGBIC TV Backlight is accessed initially through the Govee Home app. It guided me in calibrating the camera, which is critical because that generates the corresponding colors throughout the strip lights based on what it sees on the screen.

I love how you don’t need to watch TV to see the lights. Thanks to the assortment of lighting effects, ranging from simple breathing effects to more complex animations, you can set the mood for any occasion. 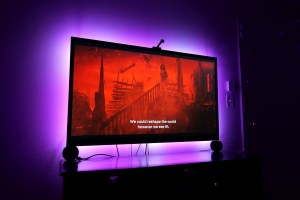 I also like its compatibility with voice assistants like Google Assistant and Amazon Alexa for voice control. I managed to set it up on a routine to turn on at a specific time, but it’s also convenient to just turn them on/off with a voice command to your smart speaker or smart display.

There’s something mesmerizing about the subtle glow that my TV now emits. Govee’s strip lights have incredible saturation and brightness so that it can make my TV the centerpiece of the living room — or it can complement another ambient light source for the room.

When it comes to how well it syncs with what I’m watching, it could do a slightly better job replicating the scenes I’m watching. Far too often, I’ve seen it just a smidge delayed. It’s not noticeable with everything, but for big explosions, it’s very apparent that the color effects lag a quarter of a second. 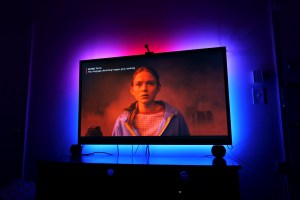 What makes this particular set of smart strip lights from Govee unique is that there are 11 exclusive lighting effects inspired by the show’s characters and iconic locations. They capture the essence nicely, like how it radiates a lot of colder tones with the dark and dreary atmosphere of the Upside Down. However, I will say that some of the other effects that Govee offers are equally captivating.

Our Verdict: Should You Buy the Govee Stranger Things Backlight?

Even though its color matching mode while watching TV could be more accurate and responsive, it’s hard to overlook its $89 cost. In contrast, you’d fork well over $400 getting the Philips Hue Gradient Lightstrip and Sync Box.

You’re saving some serious cash by going with the Govee Stranger Things RGBIC TV Backlight. Even though the Stranger Things light effects add a novel touch that only diehard fans will appreciate, you’re still getting incredible value that will boost your TV-watching experience.

Due to its limited availability, it may be hard to find. Don’t worry. You can still get the same dazzling color effects with the Govee DreamView T1 TV LED Backlights. It’s essentially the same thing, minus the exclusive Stranger Things effects.

Should You Buy the Govee Stranger Things Backlight?

No question. It’s simple to install and offers a wide variety of color effects to pair nicely with what you’re watching and as a simple decorative element to enhance your TV’s look. 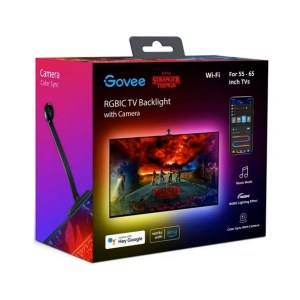