Clean air is something you might not think about until there’s an allergy sufferer in the house or wildfire smoke hanging over your town. But air purifiers can scrub pollen, mold, pet dander and dust from the air, in theory making it easier to breathe.

I’ve tried a few air purifiers (most notably I’ve reviewed nearly all of Dyson’s line, plus Molekule) and for the most part, I find they’ve been able to cut back on my husband’s spring allergy attacks, as well as scrubbing that aforementioned smoke from the home when it starts to seep in.

I recently got the chance to test out a new and more sculptural air purifier option from LG: the LG PuriCare AeroTower. This tall drink of water is both a bladeless fan and a purifier. In this review, I’ll talk about what the device is designed to do, what my experience has been with it and if I can recommend it. 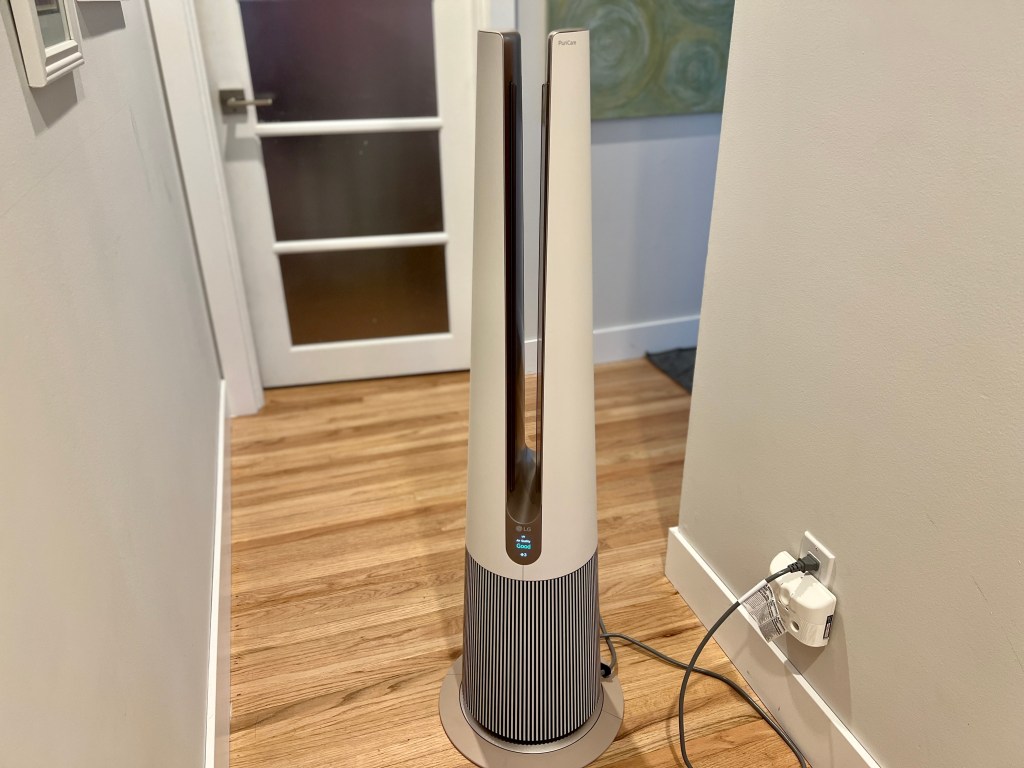 What Will LG PuriCare AeroTower Monitor?

The LG PuriCare AeroTower has a small color digital screen that displays:

There are also seamless touch controls on the top of the unit that control power, speed, fan modes and rotation. The LG AeroTower claims to easily cover spaces up to 818 square feet.

The LG PuriCare AeroTower has a UVnano feature which is designed to kill bacteria and airborne nasties that get pulled into the purifier by bombarding them with UV light. It’s not something you’ll be able to see working; just trust that the AeroTower is going the extra mile to circulate clean air back into the home.

The fan-purifier also has a true HEPA filter, which LG claims captures 99.97% of fine dust and allergens. LG doesn’t say how long the filter should last, but the small display screen on the unit will tell you when it needs to be replaced.

Particles and allergens aren’t all one size. The LG PuriCare AeroTower is designed to detect and capture three levels of particles — but it won’t tell you what these mean. It’s on you to understand the readings. The unit will capture and rate Particulate Matter (PM) as follows:

Unboxing and Setting Up the LG PuriCare AeroTower

This unit is almost comically large at nearly four feet tall and 27.6 pounds. Though it is huge, LG has clearly gone to a lot of trouble to make it look chic and blend into a modern space. Its conical shape has a wide base that tapers to a split-V, and the muted greige color I received is subtle.

Getting it unpacked is a challenge, but when it comes to the setup, you just snap on a base plate and plug it in. There’s a small remote control included in the box that just needs a battery inserted.

A filter is included with the tower; you’ll need to remove it from the plastic and install it into the base of the fan. 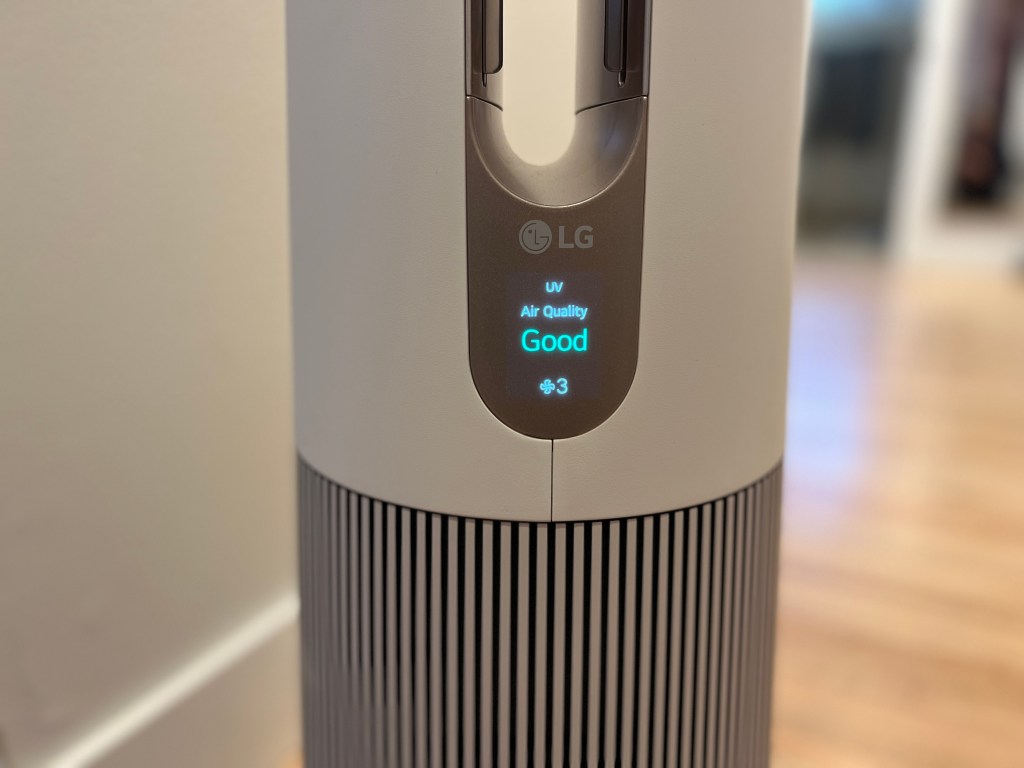 You don’t need to connect to the app for this device to work. Using the remote and on-device touch controls works just great.

But one of the draws of the LG PuriCare AeroTower is that you can use your smartphone to control it and view your air quality readings. During my several weeks with this device, I was not able to get it working with the app on my iPhone 13 or my Android Google Pixel 5.

The first problem was that, despite the app offering to scan the QR code on the back of my device for instant setup, the app did not recognize the QR code and prompted me to set it up manually. (I later tried this scan with an Android phone and it did at least recognize the device.)

I spent nearly an hour on the first day trying to connect the fan to LG‘s ThinQ app, and several more hours both by phone and via email. I will say LG’s customer service was kind and tried to be helpful and my case was escalated tine and again, but there was no resolution more than 10 days after my initial outreach. LG seems to feel the trouble is with my Wi-Fi, but I am already successfully using the LG ThinQ app with my LG dishwasher.

I’m not convinced this is an issue with the LQ ThinQ app or my Wi-Fi. I think there’s something wrong with this product; perhaps I got a bad unit since I recently read a colleague’s review calling this purifier “one of the easiest pairings I’ve dealt with in a while.” I’m disappointed LG has made no attempt or suggestion to replace this purifier for me. But the manual pointedly states that any app connection issues are not LG’s fault or concern.

Luckily you can control the LG PuricCare using the included remote control or the buttons on the device.

The remote control is small and streamlined. It has all the important controls to adjust fan speed motion, set a sleep timer and adjust the information it shows on the screen. The same touch controls are also on the top of the device. 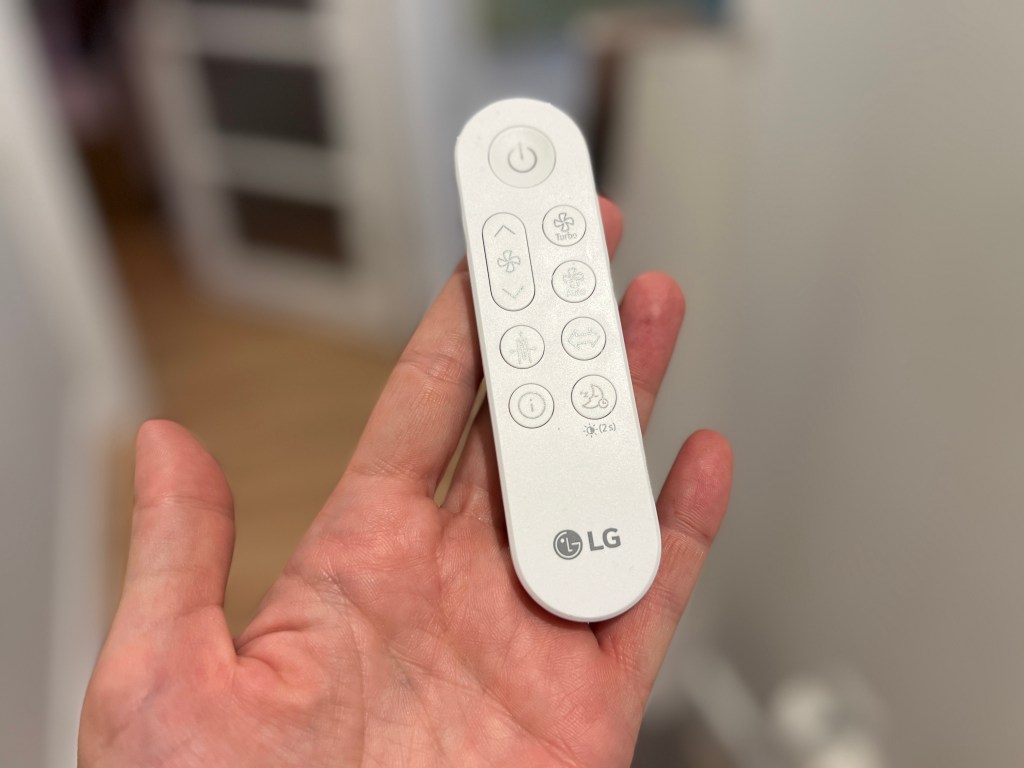 Any time you use the fan, the purifier is automatically operating. If you only want purification, not blowing air, you just dial down the fan speed.

The LG PuriCare has 10 speeds and three airflow modes:

I was surprised by how much air power this device puts out with comparatively little noise. On level five or six, I can feel a low, soft breeze from 10 feet away without any distracting noise. Even in directional mode, it’s not very harsh or windy. I still feel like the fan is cooling me without that annoying and sometimes uncomfortable blast of air that can be reminiscent of a wind tunnel. On level eight, I can be 12 feet away and still feel a breeze.

Here’s where this fan is not great, however: If you do need that direct and powerful blast of air to cool you on a sweltering summer day, you can’t get that with this device. Even at level 10 on directional flow, it barely tousled my hair — although the noise is still mild.

A question I get asked a lot about gadgets like this is if it feels like air conditioning. The answer is no. It doesn’t feel like a traditional bladed fan and it’s definitely not anywhere close to A/C. 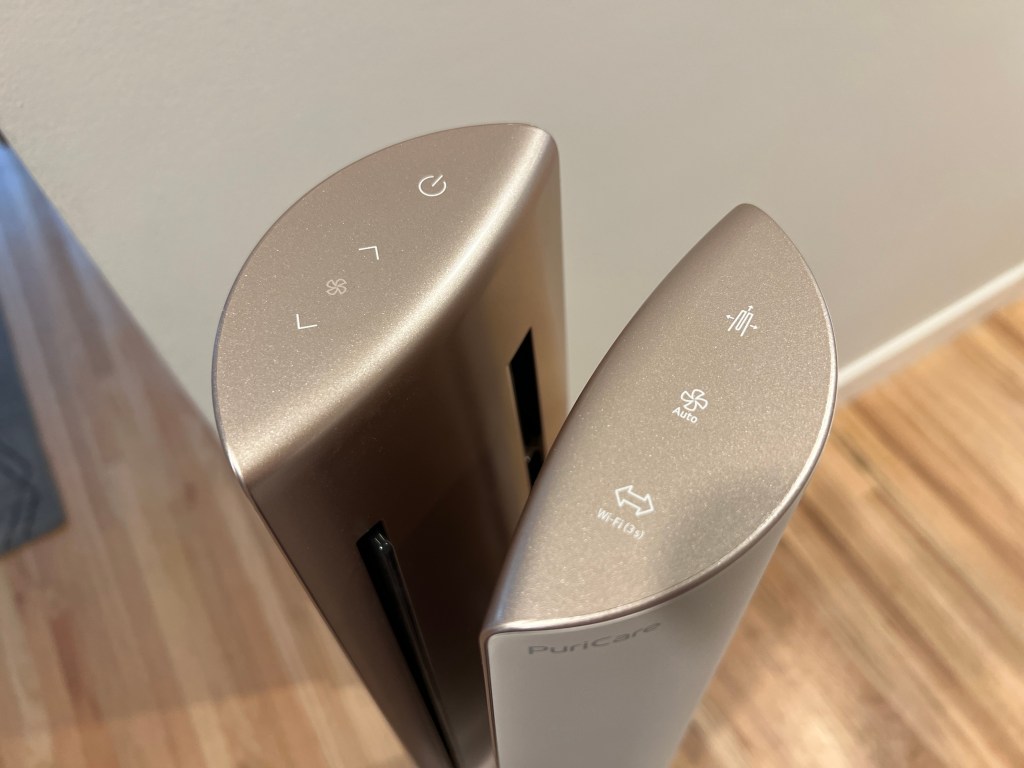 Here’s the hard part about reviewing an air purifier: Without access to a microbiology lab, I can’t test my air before, during or after using the . I can only take LG at its word. Without wildfire smoke and during a cool and delayed spring, it’s hard to know if it’s affecting seasonal allergies or not. As I noted earlier, I have seen noticeable improvements in indoor air quality with devices like this, and my husband has felt that this purifier has been helping keep his usually unpleasant allergies low and manageable.

So here’s my take on this purifier: It works great without the app and you’ll be able to enjoy all the functionality, power and control using the touch buttons or the remote. The fan is quiet, though it seems meant to stir the air and not cool you directly since it does lack the ability to whip up a strong targeted breeze.

Should You Buy It?

While I love the look of this device, there are three major detractors for me: The lack of connectivity, the lackluster directional fan cooling and the sheer size and weight.

For those reasons I’m not recommending this device and would recommend waiting for the next-generation model. 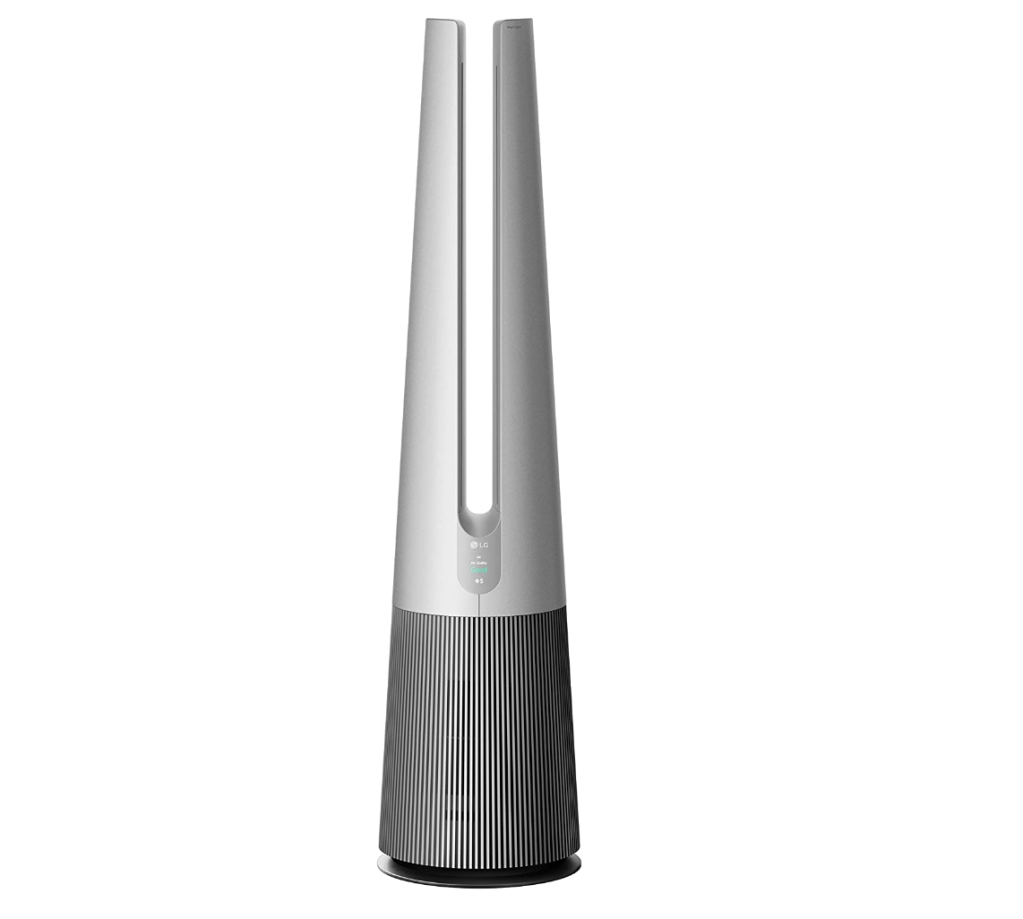 This purifier fan combination is also on the larger side but not nearly as tall. It has the added benefit of providing more detailed allergen and particulate screening, plus it will track and notify you about formaldehyde, a common chemical found in a variety of household products that can be bad for your health.  With the addition of heating, this gadget is pricey but ticks all the boxes. I have personally reviewed this device and found it connected easily and cools and heats effectively. 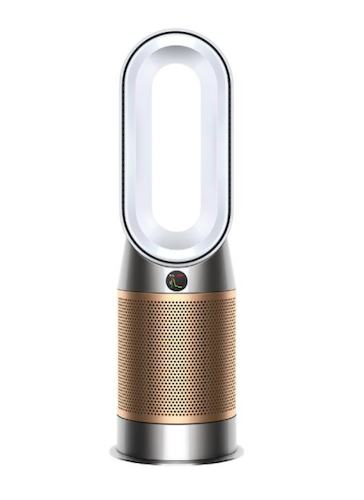 I’ve had a Molekule air purifier in the basement to keep musty smells at bay for the last couple of years, and I can confirm it does the job well. I have had intermittent connectivity issues with it, but the purifier works well and has only required annual filter upgrades. 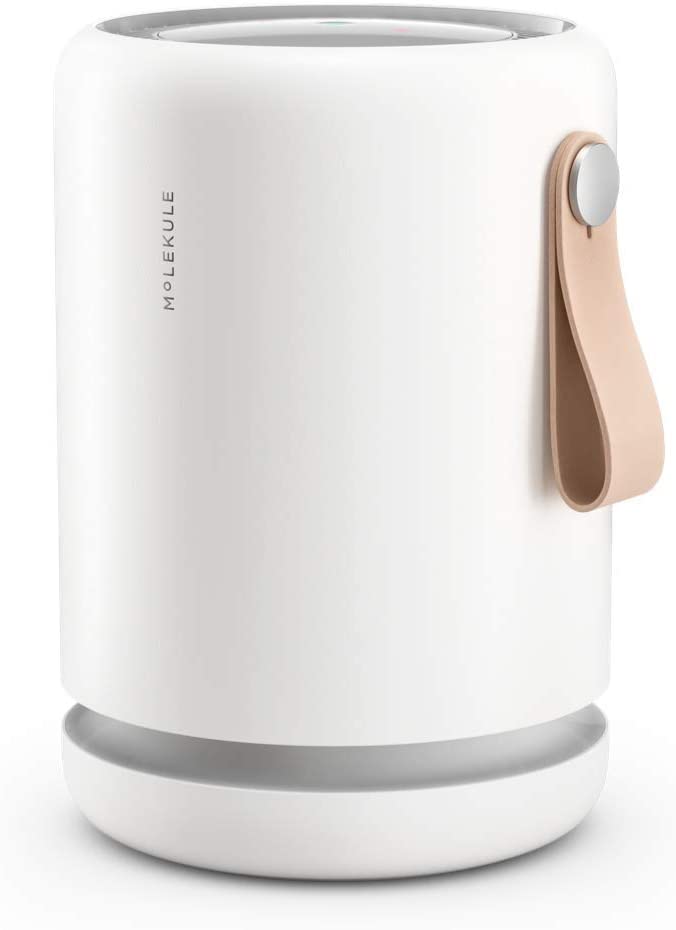