There’s no denying that Apple users have slim pickings when it comes to HomeKit compatible security cameras, so when one does come around, you know it needs to hit it out of the park. The Logitech Circle View follows a long line of other security cameras from the notable PC accessories maker, like the original Logitech Circle Home I reviewed a long while ago.

It’s an ambitious offering when you look at how it takes pride in its video quality, privacy and ease of use. The latter’s important because unlike other cameras that force you to download apps and create new accounts, the Logitech Circle View is controlled exclusively through Apple’s Home app. That’s what makes HomeKit unique, but does it have what it take to be one of the best indoor security cameras around? Find out by reading through our full Logitech Circle View review below. 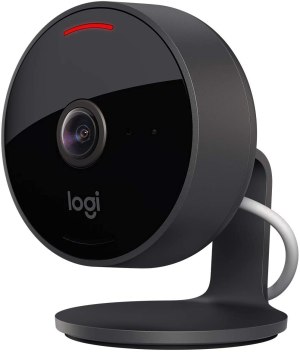 It just doesn’t feel right not being required to make an account and download an app in order to set up and use the Logitech Circle View. But then again, that’s part of the beauty about being a HomeKit device — everything is done through the Home app, so there’s no messing around with user names or passwords. 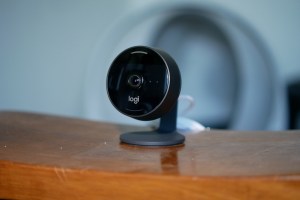 After scanning a QR code and then selecting routines for the camera, it was all ready to go. This setup process is one of the easiest that I’ve come across while testing out security cameras, which I believe is important because the process makes it a breeze for non-savvy tech users.

I will admit, Logitech’s security camera designs have been interesting in the past because of their modularity. This time around, however, Logitech placed more emphasis on style with the Circle View’s puck shape. That’s not a bad thing, especially when it features a weatherproof body that allows it to be used outdoors. 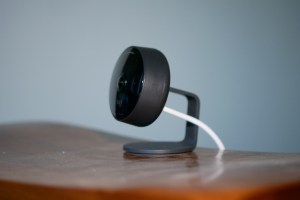 The shiny all-black chassis certainly adds a stylish quality to the design, instead of the boring gray plastics widely used by many security cameras. However, the biggest complaint I have about the design is the integrated cable. I understand that it helps to maintain its weatherproof rating, but if it goes bad in some way, it means replacing the camera entirely versus just the cable.

The first thing that stood out watching its live stream is the fisheye look of the footage. It distorts the corners and edges of the video, but it’s the unintentional effect of its ultra-wide, 180-degree field of view. It’s the widest field of view I’ve tested in an indoor camera, so it had no problem covering my living room from one side to the other. Covering such a wide area is especially useful for a static camera like this.

When it comes to video quality, the 1080p footage it produces has sufficient details and realistic colors that aren’t too over-saturated in tone. Dynamic range isn’t great, nor is it terrible. I can tell it does a better job of boosting shadows, but the highlights don’t get the same level of treatment, which results in brighter spots in the footage appearing overexposed.

Night vision performance is also adequate. It had no problem lighting up the area in my living room where I had it watching over, which is a distance of about 12 feet. However, its rating of 15 feet still trails some of its main rivals.

Before I dive into some of its security features, just know that the Logitech Circle View only works with iOS devices like the iPhone and iPad. If you have an Android smartphone, you’ll want to look elsewhere.

By itself, you can use the camera without being enrolled in any subscription service. However, if you want it to save videos of triggered events and view them later on, you’ll need an iCloud subscription service. At the bare minimum, you’ll need to be on the $3 monthly iCloud plan because neither the free 5GB or $0.99 per month plans offer support for cloud storage with video. 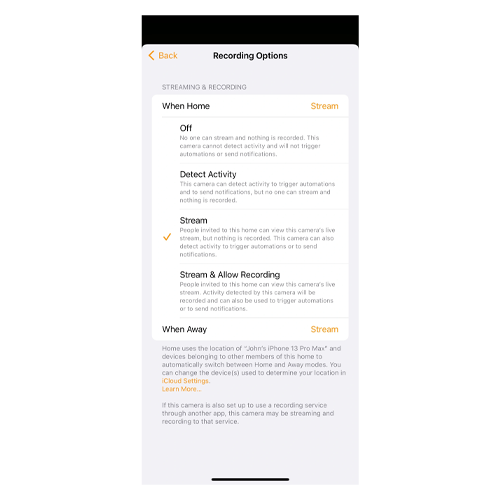 I have very few complaints about its performance, mainly because it’s been accurate in detecting people, motion and my two cats whenever I’m not at home. I also like how you can leverage the camera’s light and motion sensors to automate with other devices connected to HomeKit. For example, I’ve created an automation that automatically turns on my Philips Hue smart lights whenever the ambient light goes below a certain level. These kinds of options definitely help users to better control and manage their smart home devices.

Since my GPS location is tied to my iPhone, I find it convenient that HomeKit provides me the option of what to do with the camera when I’m home or away. The last thing I want is to micromanage how my security camera works, so it’s useful that it can automatically turn on and record video when I’m away. 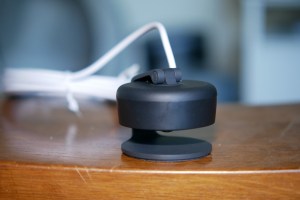 Alternatively, Logitech throws in two more privacy-related features. The first is a physical button on the back of the camera that effectively cuts the camera’s microphone and video feed. It’s a nice gesture, but if you forget to disable it and leave your home, you won’t be able to access the camera until you press the button again. Secondly, you can physically tilt the camera all the way down, so that the camera is hidden. It’s not the best implementation, but at least you can go about at home without fear of someone seeing you.

The Logitech Circle View represents the best of what a HomeKit-powered security camera could offer. It’s a reliable security camera made better by the fact that you don’t have to fumble around a third-party app in order to use it. Sure, it’s on the pricier side for an indoor camera, but you’re paying for convenience and reliability.

The Logitech Circle View is a solidly constructed camera and has a stylish design that makes me believe that it’ll hold up for a long time. Logitech does offer a 1-year limited warranty to protect it against defects.

Even though there are very few HomeKit compatible security cameras, there are still plenty of options that work with iPhones using third-party apps.

The only other HomeKit compatible option to consider is the Eve Cam, which shares many of the same fundamental privacy features and automations. 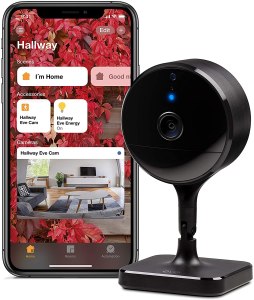 Whether you own an iPhone or Android, the Google Nest Cam is one of the best around with its intelligent alerts, sharp 1080p video with HDR, and up to three hours of free video history. 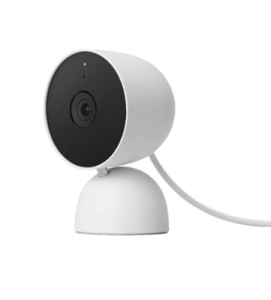 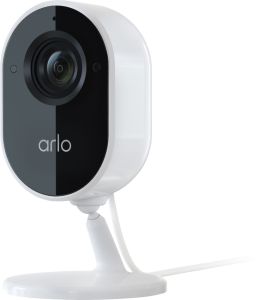