Security has always been Ring’s primary focus, and through the years, the brand has proven time after time that safety and protection is paramount. From its diverse line of Ring video doorbells, to expanding beyond its core products into areas such as smart lighting, there’s no denying that Ring offers one of the richest smart home ecosystems around.

After spending more than three months with the Ring Alarm Pro, I’ve come to realize that it’s an example of what I consider as the central figure of a smart home. Read on for our full Ring Alarm Pro review and find out why. 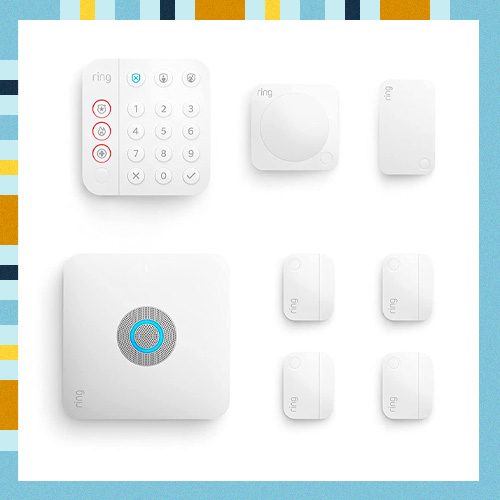 Getting the Ring Alarm Pro set up involves installing several components since it’s also technically a Wi-Fi 6 Eero router. That means determining whether or not you want to replace your existing router. I decided to swap mine for this, just because of the added benefit of expanding the network’s range by purchasing additional Eero 6 extenders whenever they’re needed.

I was guided on how to replace my router through the Ring app, which also had me set up all the other sensors that came included with the packaging — like the door sensor, motion detector, and window sensors. These sensors all communicate to the router/hub through Z-Wave technology, so they offer good range while also being energy efficient. 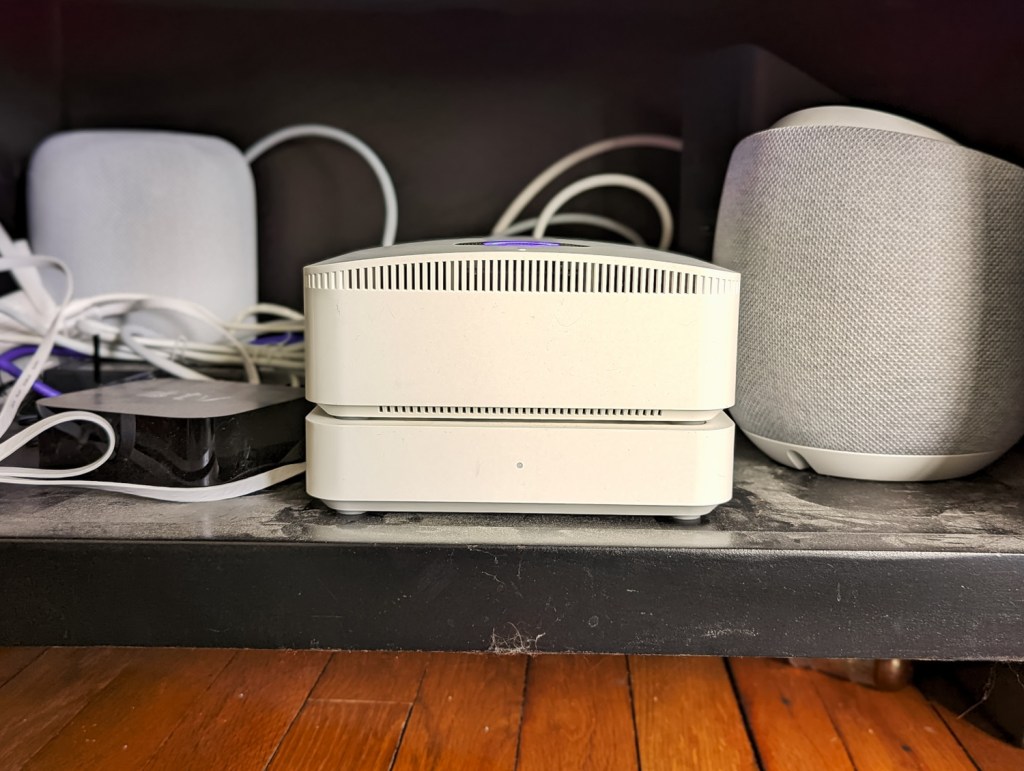 Most tech nerds won’t have much trouble getting the Ring Alarm Pro set up, which took me no more than 30 minutes, but others may need more help. For that exact situation, there’s a professional service available through OnTech Smart Services.

Having used the previous Ring Alarm (2nd Gen), there’s nothing too different with this newer model aesthetically. It bears a striking resemblance to other wireless routers you may have owned, but I really wish it offered more ethernet ports. You’re only given two, but it technically left me with just a single available port once I connected my gateway modem to it. Sure, there are more wireless devices than ever before, but it still would’ve been convenient to have more to work with. 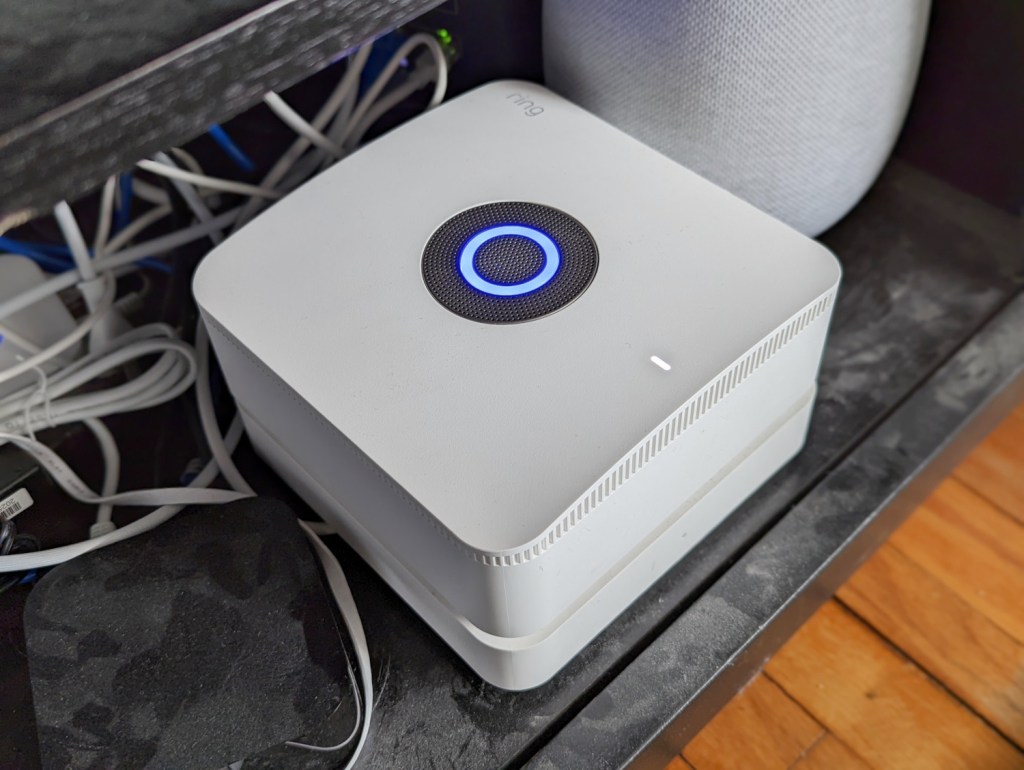 Beyond that, it’s worth pointing out that the hub has a deafening 104 dB siren that sounds off whenever the alarm is tripped. And trust me, it was loud enough to get my neighbor’s attention. There’s a microSD slot on the back for video backup (more on that later), as well as an internal battery backup that lasts up to 24 hours in low power mode. You can also extend its battery life with additional Ring Power Packs, which can be stacked beneath the hub.

It’s not as pretty looking as SimiplSafe’s base station hub, but there’s no other like it around because it’s also a Wi-Fi 6 router. Who doesn’t like less clutter?

Everything is communicated through the base station, it’s the brains behind the entire operation. All the sensors work as they’re intended, so whenever they’re tripped, a notification pops up on my phone to inform me. Just like other security systems, the Ring Alarm Pro needs to be armed whenever you’re leaving — so that can be done either through the app or included keypad. Although, I will say that the new geo fencing option in the Ring app makes it even more convenient because it sends me notifications whenever I leave my apartment about arming/disarming it.

In the three months before writing my Ring Alarm Pro review, the system has consistently been able to inform me whenever any of the sensors were tripped. There were a couple of times early on when the motion detection sensor was tripped off by one of our cats, which resulted in a phone call from one ​​Ring’s professional monitoring service. Sure, it was a false alarm, but this kind of response is exactly what you want for real emergencies. 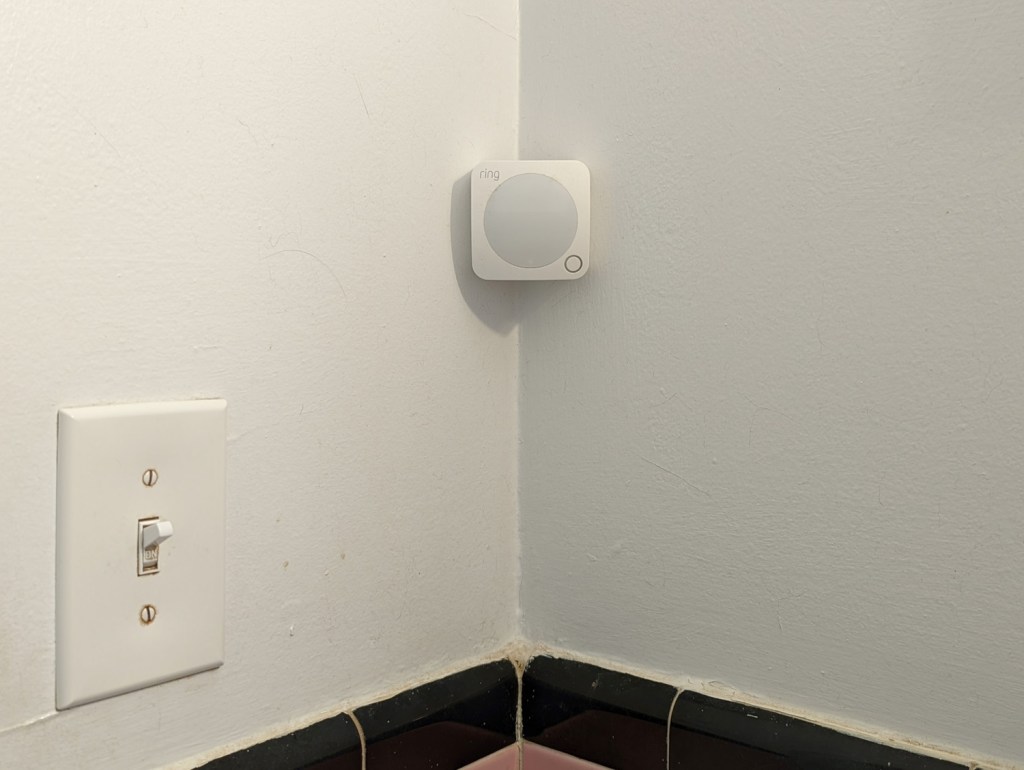 Existing Ring users will also appreciate local video storage for all connected Ring cameras courtesy of the microSD slot on the back of the base station hub, so that you will always have hard copies of whatever footage is captured by your doorbell and security cameras.

What makes the Ring Alarm Pro even more valuable is that it offers both battery and internet backup as part of its portfolio. The latter being unique because unlike its competitors, if your home internet services goes down unexpectedly, all your gadgets are rendered inoperable because of the lack of internet service. With the Ring Alarm Pro, however, it’ll detect the shutoff and will automatically revert to backup internet. That means your laptop, security cameras, and litter robots will continue to function. 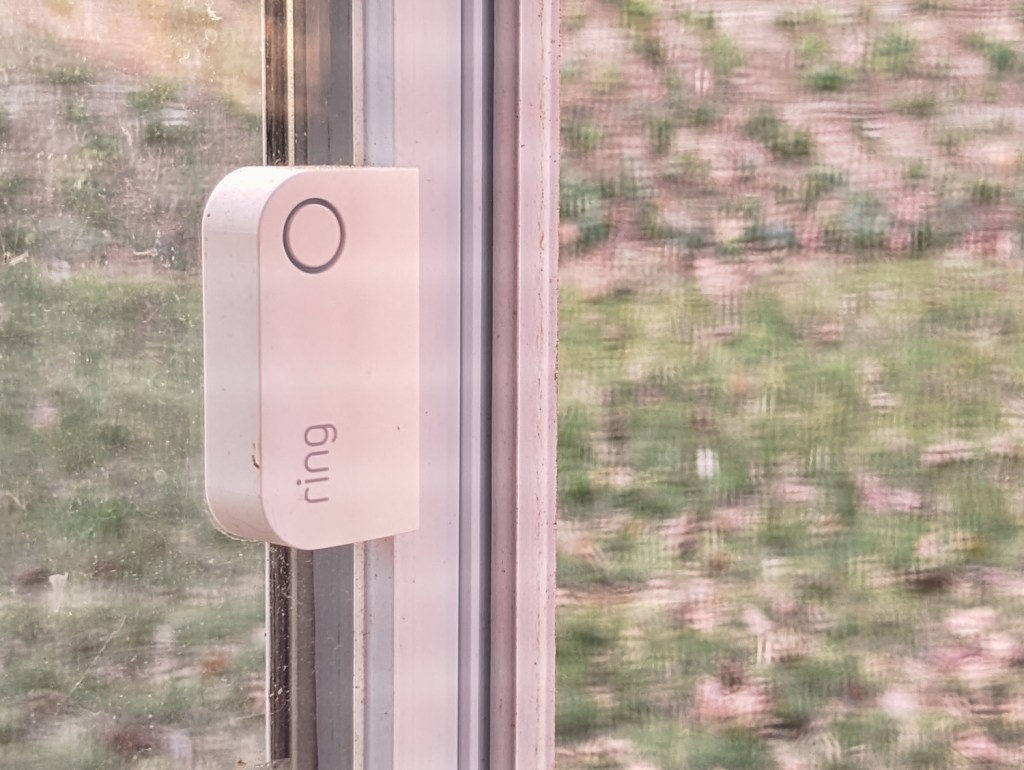 When it matters most, the Ring Alarm Pro serves as a reliable guard to protect the home inside and out, when the power goes out, and when the internet goes offline. That’s protection you won’t get elsewhere.

Even better is the fact that Ring offers such a diverse lineup of smart home gadgets to enhance the Ring Alarm Pro. There are a range of accessories, but here are some of the important ones to consider beyond the usual set that come with the initial purchase.

These extenders are wonderful if you’re looking to expand your Wi-Fi coverage in the home. For smaller apartments, the base station hub may suffice, but for larger spaces, the Eero 6 Extender will help to cover the gaps. 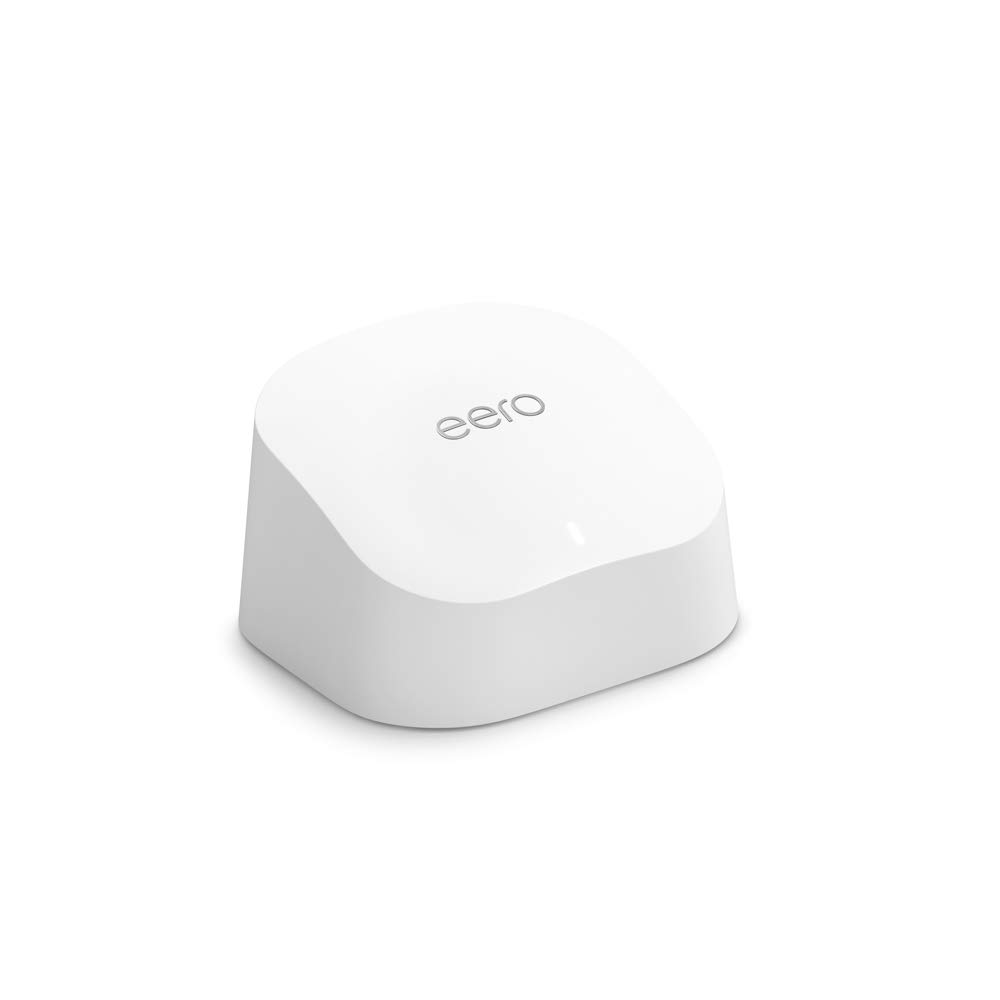 This accessory will listen for the distinct sound of glass breaking up to 25 feet away, which can then sound off its own built-in siren — while still sending you a notification through the Ring app. 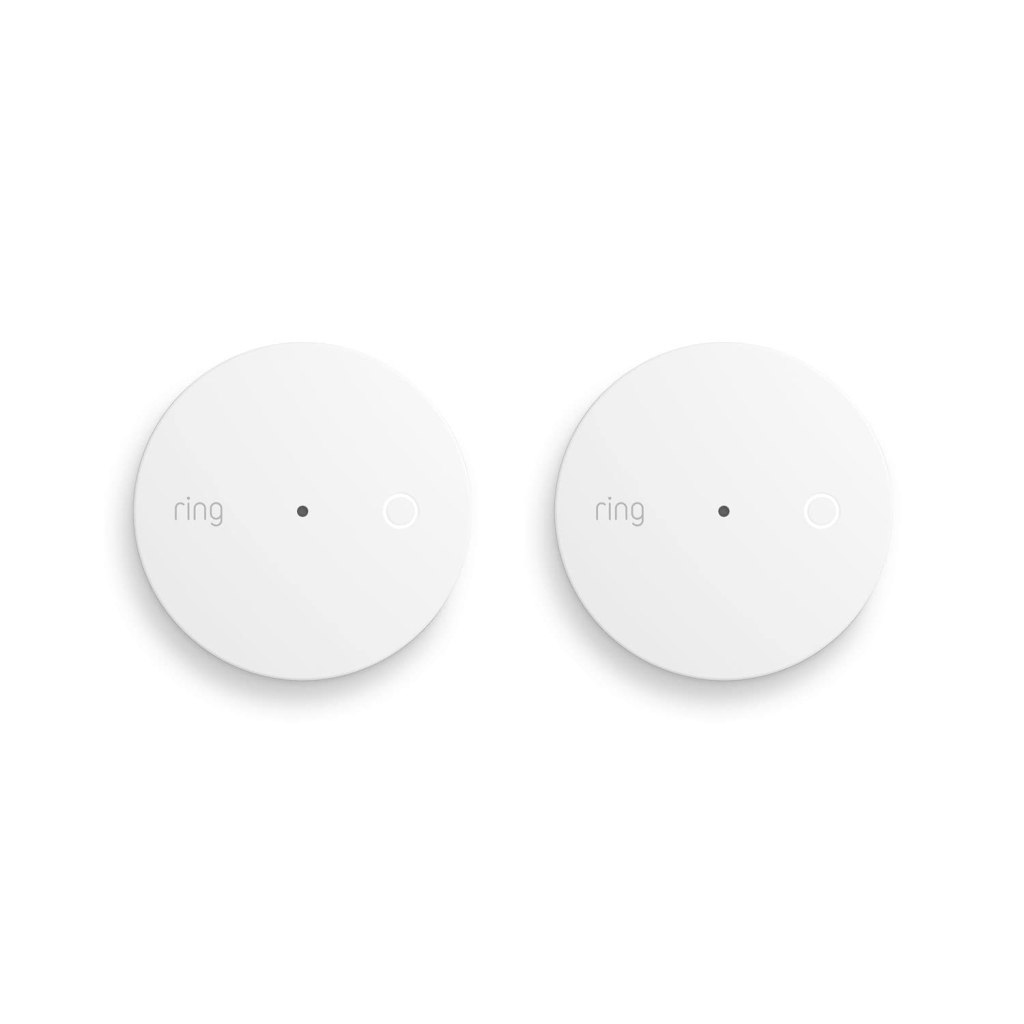 Sure, most of us are probably more concerned about break-ins through the door or windows, but there are also hidden dangers inside of the home as well. With the Alarm Flood & Freeze Sensor, it’s handy to have in places like laundry rooms or bathrooms because it can detect when there’s a flood. 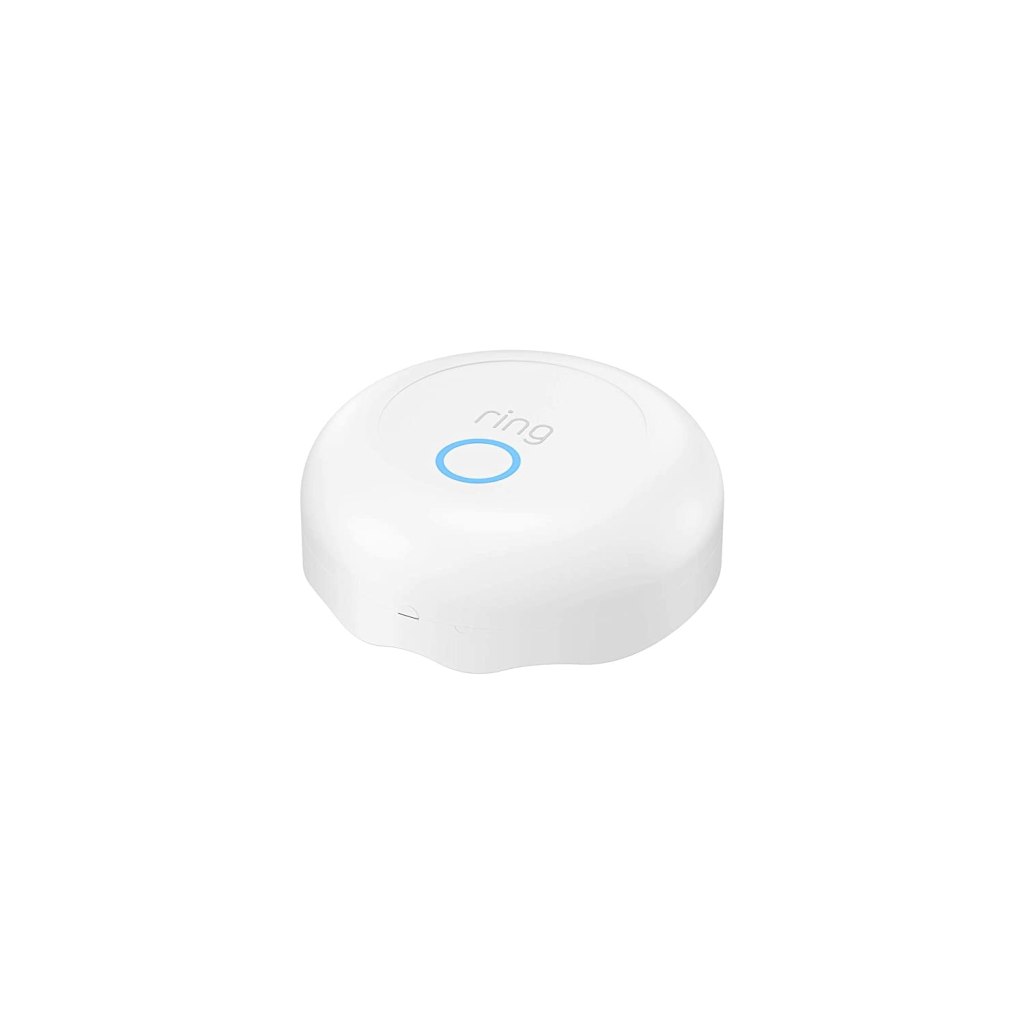 If you already own a smoke or carbon monoxide detector, you can pick up Ring’s Alarm Smoke and CO Listener to receive notifications whenever they go off. 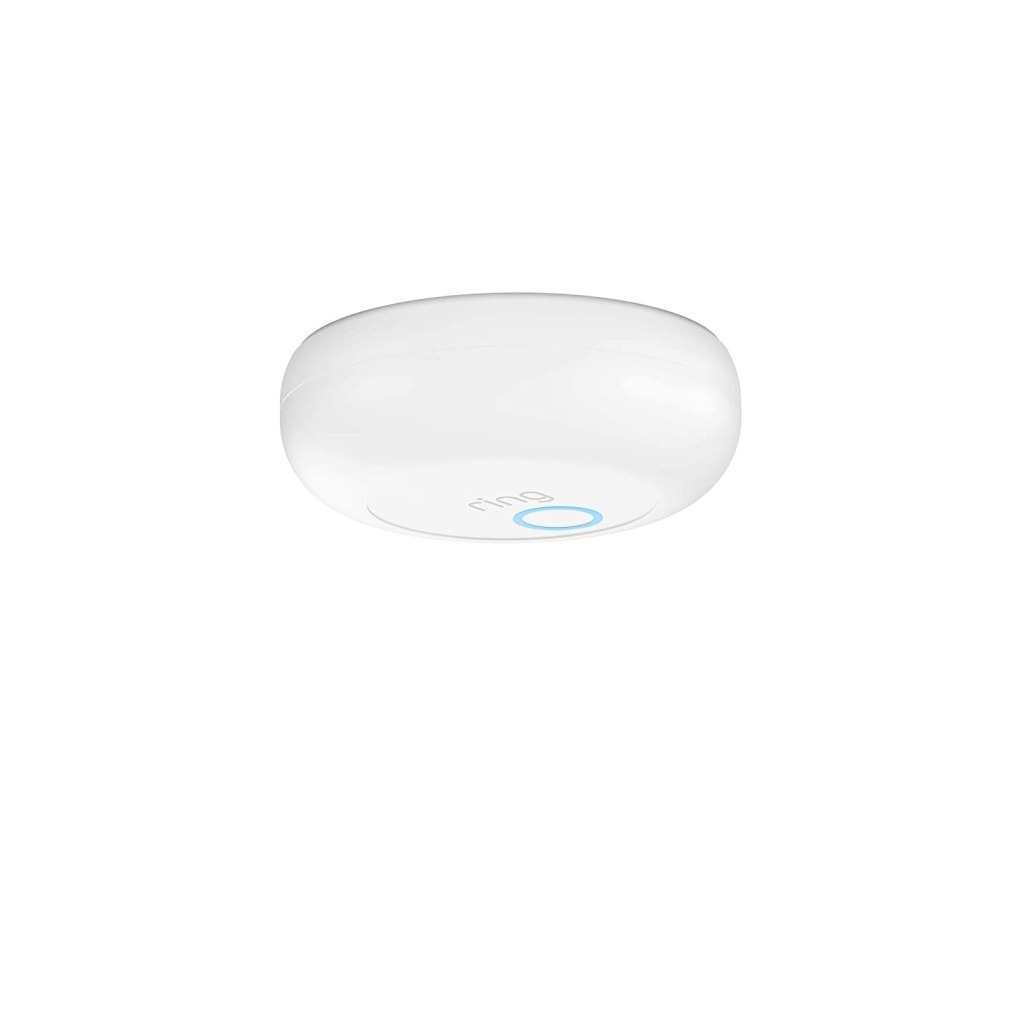 The other benefit of the Ring Alarm Pro is that it doubles as a Eero Wi-Fi 6 Router, delivering speeds upwards of 900 Mbps and coverage of up to 1,500 square feet. That’s more than enough coverage for my apartment, but as I’ve mentioned earlier, you can extend the range by purchasing extenders later on. 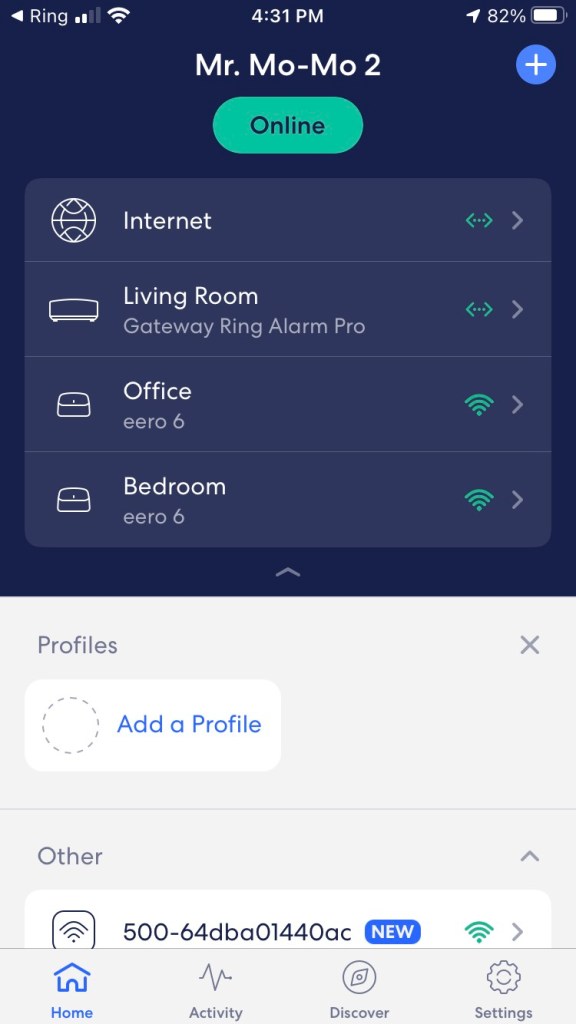 The only minor complaint is that instead of accessing the router’s many functions, like network activity and port forwarding, I’m forced to use another app. It’s one extra app to manage, which I can understand is a problem. Despite this, it’s wonderful having oversight in what’s happening on my network.

Speeds aren’t bad either, since I’ve continuously been getting average download load speeds of close to 900 Mbps on the down, but 41 Mbps with uploads.

Our Verdict: A Truly Ridiculous Amount of Home Security for $300

Peace of mind doesn’t just end at receiving alerts whenever a sensor’s tripped or motion is detected by a camera. The Ring Alarm Pro offers outstanding protection for all sorts of situations, including emergencies that require prompt responses. What makes the Ring Alarm Pro the new gold standard of home security is that it’s mindful of true emergency situations such as power and internet outages. This is what whole-home security should look like.

In terms of cost, the Ring Alarm Pro starts at $300 for the 8-piece kit, and then there’s the $20/month subscription for Ring Protect Pro. That subscription cost includes 24/7 professional monitoring and up to 3GB of backup internet, with the option of more data at the rate of $3/GB. Considering all the features and equipment that you get for the price, this is officially the DIY security system to beat.

You bet. There’s no other home security systems that’s this mindful about your protection. 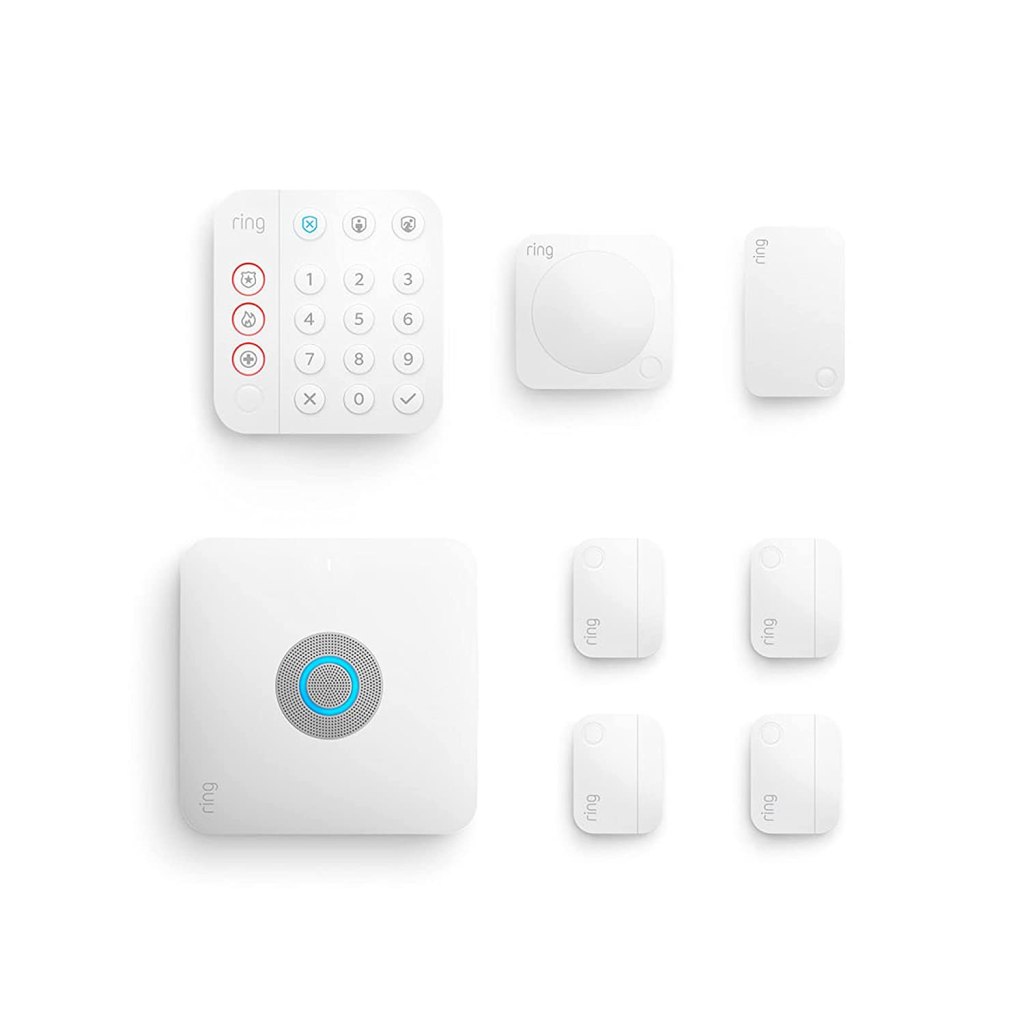 Since the Ring Alarm Pro is going to sit still next to wherever your modem is located, it’s highly unlikely it’ll be in danger of damage. There’s a 1-year limited warranty that covers for parts and labor due to defects.

The DIY home security space makes it easier than ever before to get yourself set up with a reliable system without the need of a professional to come out and set it up for you. Here are some alternatives to consider.

SimpliSafe is a notable player in the DIY home security space, offering a slew of accessories, cameras, and even a smart lock to cover your entire home. Best of all, the minimalist designs of its products do nicely to complement your home’s decor. 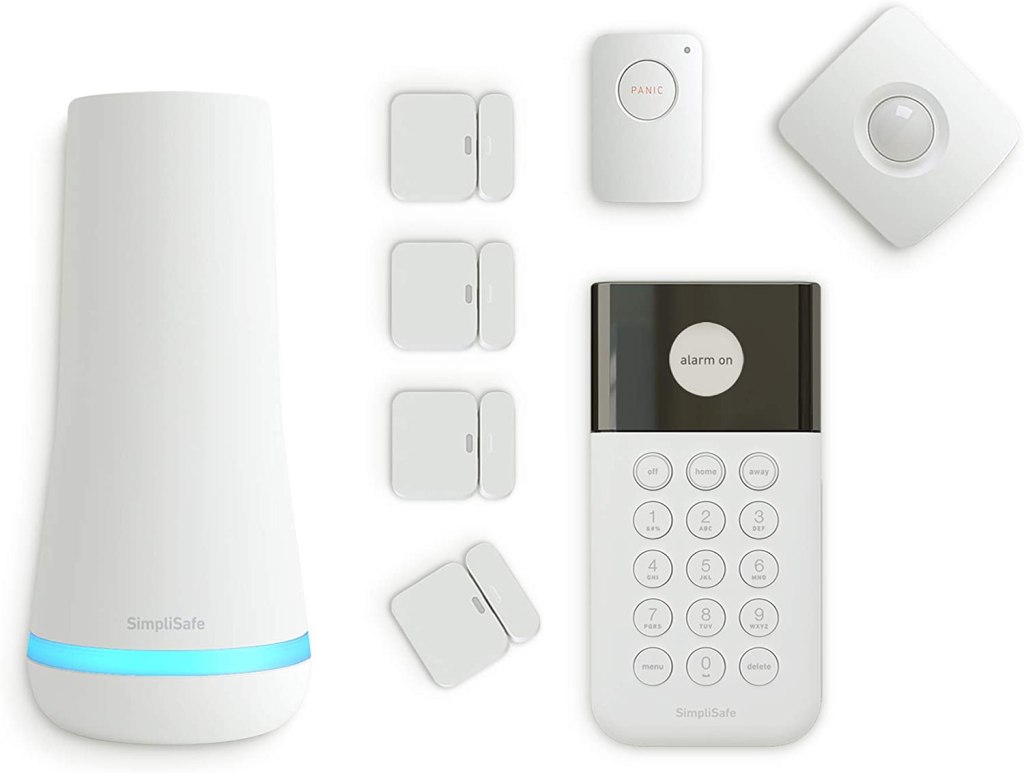 ADT’s a name that many people are familiar with, but Blue by ADT is actually the DIY home security branch of the longtime security systems company. There’s 24/7 home monitoring available as well, so that you can receive help in the event of emergencies. 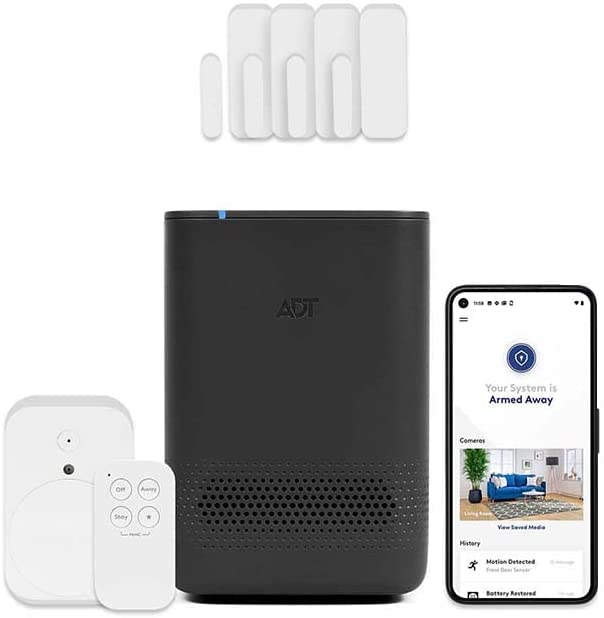 A relative newcomer in the space, smart home gadgets maker Wyze recently introduced its Wyze Home Monitoring, which is most notable for its ultra-affordable cost. 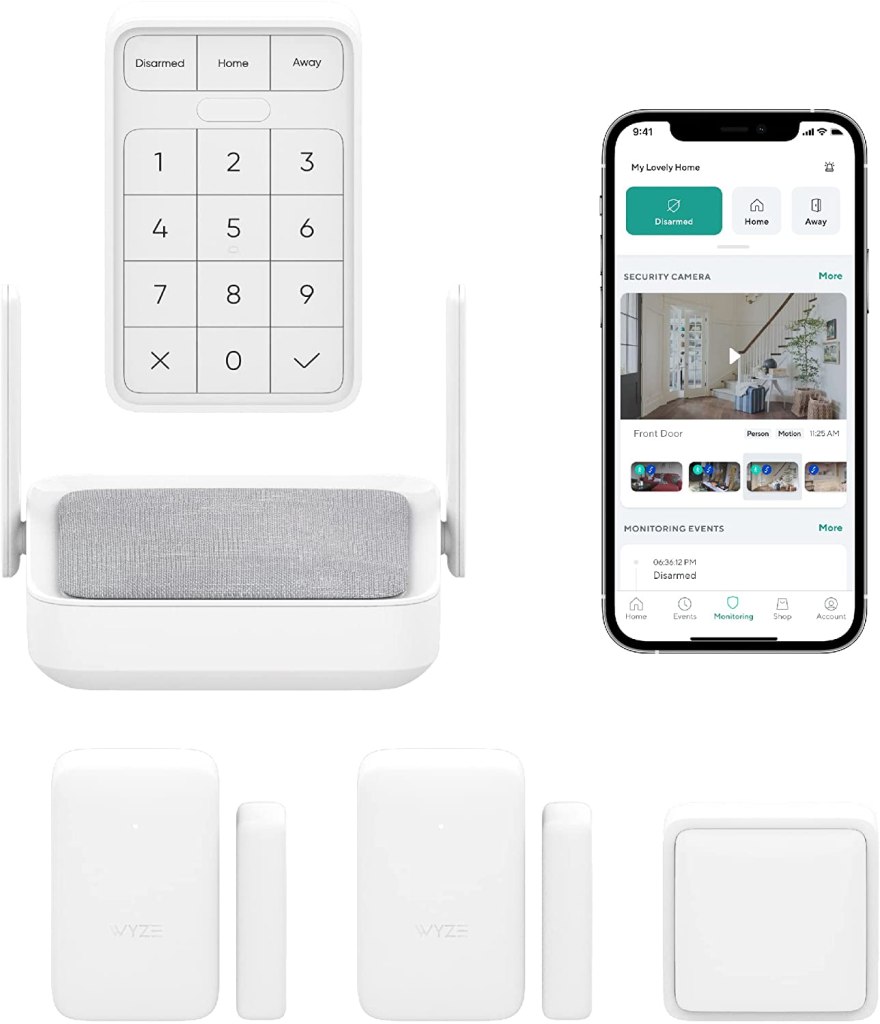