Out of all the gadgets and gizmos that were announced at CES 2022, there was one that came from left field that astounded me the most: the Samsung Freestyle. Part of the reason why it left such an impression on me was because it combined several smart devices into one. If you know me, then you know how much I obsess over multi-functioning gadgets.

The Freestyle is a digital projector at heart and is accompanied by the functions of a smart display, smart speaker and smart light, all wrapped into a unique design that resembles a spotlight. It’s an ambitious gadget for sure, one that could very well reshape what we expect out of a projector.

We were excited to try out this projector when Samsung first announced it, and we finally got the chance to test it out. But does it work the way Samsung intends? Find out by reading our Samsung Freestyle review below. 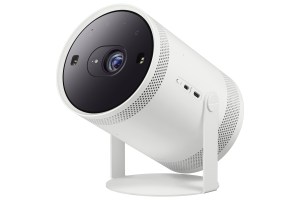 For my Samsung Freestyle review, I found that setup was pretty simple. Here’s what’s included in the box when it first arrives:

Even though you can complete the entire setup process with the included remote, I’d suggest using your smartphone to help breeze through prompts that require you to input accounts and passwords. After connecting the Freestyle to my home’s WiFi network and then proceeding to add my Samsung account, it was finally ready to go. 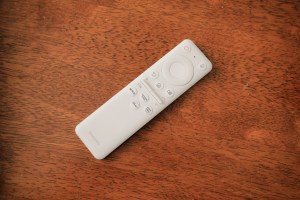 I did run into a hiccup getting my smartphone connected, which had me scan a QR code to open a link on my phone. Thankfully, a second attempt seemed to fix the issue. All told, it took me about 10 minutes to complete.

Obviously, the most important metric to look at in our Samsung Freestyle review is the quality of the projection. Given its size and portability, brightness has always been an issue in my experience with these kinds of projectors — much like the Nebula Capsule II from Anker that I’ve used in the past. The Freestyle uses an LED light source to project in 1080p from 30-inches to 100-inches. For the most part, the Freestyle produces enough brightness to make it usable on walls or ceilings with the blinds down in the room. 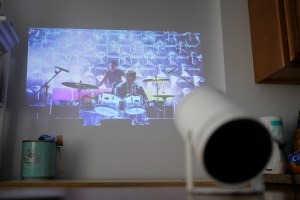 Is it brighter than my smart TV? Absolutely not, but I’m still impressed by what it’s able to produce. In bright sunny conditions with the window open, it’s nearly impossible to see the projection, but with the shades pulled down and only a little bit of light coming in, I was more than able to see the projection from the Samsung Freestyle. Not surprisingly, it got much better at night for all the obvious reasons.

I was even more impressed by the colors since it automatically adjusts the white balance to adapt to whatever wall it’s projecting onto. It’s undeniably more punchy and saturated than what I was expecting, which is a good thing because it always kept my attention. It also helps that HDR10 support definitely adds to its dynamic range performance. 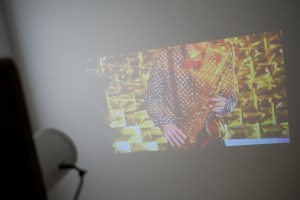 Additionally, there’s automatic keystone correction that takes the pain of manually adjusting the projection myself when the Freestyle’s projecting at an angle — whether it’s tilted up to raise the projection higher on the wall, or at an angle from left to right. It takes some of the frustration out of myself having to do it, but sometimes it can be off a bit. Likewise, I wish there was a rotate function when projecting it up to the ceiling while in bed, just because I’d have to lay down at an angle in order to properly view the projection.

Samsung ditched the traditional projector design in favor of something much more charming. Its resemblance to a spotlight certainly sets it apart from other models, but what I was really surprised by was its compact size. I was honestly expecting something much bigger, closer in size to the original Apple HomePod or Amazon Echo Studio.

With the main component able to freely swivel in place, this design implementation made it much easier to adjust the angle of the projection than your average projector. However, I wish that the plastic screws used to hold it in place were replaced by knobs to make it more convenient to tighten. I found the plastic screws to be a bit more malleable after attempting to tighten one of them using a skinny screwdriver. 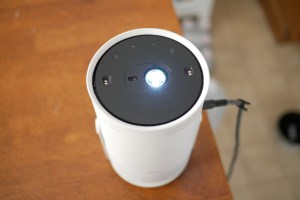 On the body of the Freestyle, there’s a USB-C port that supplies power to the unit. This is important to know because unlike other portable projectors I’ve used that have built-in batteries, you’ll need to bring along a power source of some kind with you — or simply plug it into an outlet. While I also appreciate the microHDMI port on the side to easily connect any of your gadgets to it, like a laptop or tablet, I wish it were a full-sized HDMI port instead. It simply means you’ll need to supply yourself with an adapter if you already don’t have one.

The last detail I’d like to point out about the design is that it lacks built-in navigational controls. Yes, there are touch-sensitive buttons on the face of the projector for power, volume controls and a back button, but it would greatly benefit from having controls to navigate around the user interface. Instead, you simply have the remote or your smartphone.

Running the same Tizen-based software running in Samsung’s smart TVs, the Freestyle is filled with your usual staple of streaming services right from the home screen. In fact, the layout is very familiar to any streaming box out there, like Amazon’s line of Fire TV streaming boxes or Roku. The only problem, though, is that the experience can sometimes be bogged down by random moments of sluggishness. Sometimes it’s fast and responsive when navigating through the software, but there are times when it’s crawling or simply trying to catch up with an action.

Despite this, it’ll please streaming fans with its robust support. It has staple streaming services like Netflix, HBO Max, Disney+ and Amazon Prime Video. I was actually surprised to find the Xfinity streaming app, which effectively makes the Freestyle a cable box that can stream live TV.

Samsung takes the experience one step further by introducing other fun modes that you don’t typically expect to find. Voice control via Bixby or Amazon Alexa is useful instead of relying on my smartphone or remote to run specific apps. This also comes in handy with controlling all of the smart home devices in my apartment, so in that regard, it very much acts like a smart speaker.

Going outside of the norm is the Freestyle’s ambient mode, which is a collection of fun lighting effects you can project onto your walls. It’s without question unique and provides a decorative quality to this projector. There are a small handful of options to check out, but I really hope there will be more available down the road — or perhaps the option of adding custom images. 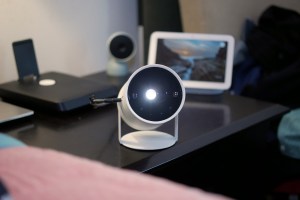 And finally, I was able to screen share my Samsung Galaxy Tab S8+ to the Freestyle, giving me a hands-free way of projecting my tablet’s screen. It’s not the most important feature for me, but it’s a convenient option to wirelessly stream a device to the projector.

I’ve mentioned how the Samsung Freestyle is effectively a smart speaker with its support for Bixby and Alexa. When it comes purely to audio, it’s average at best with its performance. I would say its quality is on par with an Amazon Echo Dot (4th Gen). Meaning, it’s good enough to fill most spaces, but I wouldn’t go as far as saying that it’s better than a soundbar. I found it just a little light with the bass, while mids and highs sounded on the thinner side as well.

It’s not often we get a gadget that covers multiple product categories, but that’s exactly the allure of the Samsung Freestyle. While I appreciate how it tackles several functions, it never really seems to truly excel in any one of them.

Add to that its price of $900 and it’s an even tougher sell when you look at what else is out there. But, if you can overlook its middle-of-the-road performance, the Samsung Freestyle takes pride in its diversity. How often do we find a single device that packs in all the functions of a smart speaker, projector, smart display, smart light and smart TV?

Yes. It may not win over serious home theater buffs, but the average consumer will appreciate it nonetheless for its rich features.

The biggest question is how well will the light source hold up over time. It’s a tough question to answer, but Samsung has the light source rated for 20,000 hours, which is a little over 833 days. I would suspect brightness degradation over time, but it seems to be well ventilated to better dissipate the heat build-up while it’s running. Samsung does throw in a 1-year limited warranty that covers it for defects.

It’s also worth pointing out that Samsung intends to add more accessories to extend the life of the Freestyle. The upcoming battery base will mean a truly wireless operation to free it from being tethered to a wall outlet, while the socket adapter will allow the Freestyle to connect to light sockets.

Below, you’ll find some other compact-sized projectors worth looking at that are very similar to the Freestyle.

Is picture quality important to you? The Nebula Cosmos is a compact-sized 1080p projector with HDR10 support that delivers impressive dynamic range for about the same cost as the Freestyle. 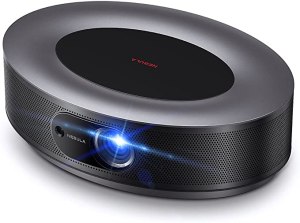 Somewhat oddly shaped, the XGIMI Mogo Pro is an Android TV portable projector complete with 1080p output, sound by Harman Kardon and a built-in battery that allows you to bring it anywhere. 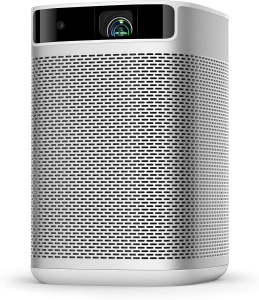 For those looking to entertain or preoccupy children, the PVO Mini Projector is an ultra-affordable projector that wins in the price category. 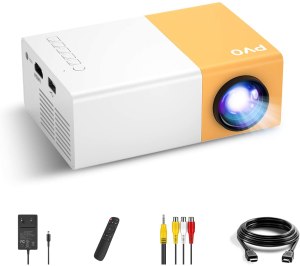