We are on a continuous search for the best wireless earbuds. Our team researches and tests a wide variety of earbuds from the popular Airpods Pro to the lesser-known models like the 1More Evo wireless earbuds, all in an effort to find you the best sounding and most comfortable earbuds.

Speaking of the latter, I’ve been rocking the 1More Evo earbuds as my daily drivers for the last week. If you have read any of my other headphone reviews for SPY, such as the Hypersonic 360 or the Mobvoi ANC Earbuds, you’ll know I often compare my experience to my personal earbuds, Airpods Pro, as will be the case here. This is also a good gauge considering both are close in price. That being said, are the 1More Evo earbuds a dark horse pick for some of the best wireless earbuds available? Read on to see if these earbuds are worth the premium price tag in my 1More Evo Wireless Earbuds review below. 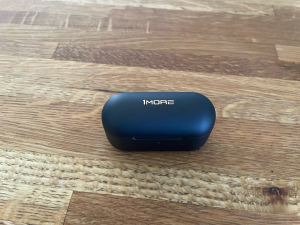 Let’s take a moment to give the design its props. The flat bottom of the case allows it to stand upright, which I found convenient, especially when it comes to wireless charging (more on that later) and when you open the case, the glossy black earbuds almost look like little jewels in a treasure chest. Needless to say, I was impressed by the overall spiffy presentation of the case and earbuds. It looks so clean and modern.

Pairing the Evo earbuds was similar to pairing Airpod Pros to your iPhone. The pairing button is located inside of the case between the two headphones. Hold down the pairing button and select the earbuds when it displays as one of your Bluetooth options. After that, the earbuds automatically pair to your phone whenever you take them out of the case.

As for the design of the earbuds, like the Jabra Elite 75t, there are no stems. I found the design to fit incredibly well in my ears. I went for my typical morning run and worked out afterward a few days in a row wearing the earbuds and I never had to push them back in, adjust or keep them from falling out. I really enjoyed the fit.

Features: A Good Range But Not Everything Works Well 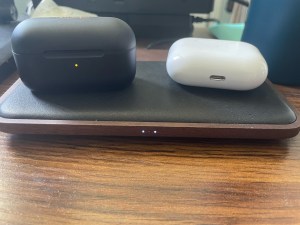 I was pleasantly surprised that the 1More Evo earbuds feature wireless charging capabilities. You can set the case on a wireless charger of your choice, or use the included USB-A to USB-C to charge it. Note, these earbuds don’t come with a charging block.

When you download the app, you gain additional features like full ANC, adaptive ANC and transparent modes. I found that the ANC doesn’t work very well. When I have my Airpods in, and I am running on a treadmill with the ANC on, the treadmill is well muted. With the 1More, the pounding of my feet on the treadmill sounded the same whether I had the ANC on or off. That was a disappointment. 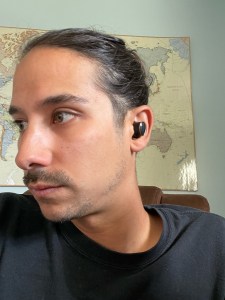 I put the fully charged buds in my ears for my morning run at 7:30 am and listened to a mix of podcasts and music nonstop until the battery was totally drained at 2 pm (note: I was not running from 7:30 am to 2 pm, that would kill me). There was a mix of switching between the ANC and having it off during that period, but I got about 6.5 hours of operating time. That is about two hours better than my Airpods. With case charging, you can expect about 28 hours’ worth of battery life.

My girlfriend called me while I was wearing the headphones. Although I could hear her clearly, she immediately made the comment “you’re testing the other earbuds, aren’t you?” She could tell because to her, I didn’t sound as clear compared to when I had my Airpods in. She could still hear me fine, but my voice lacked the crystal clarity comparatively.

Now for the most important aspect — the sound quality. These aren’t nearly as balanced as Airpods. I found the soundscape to be much brighter, highlighting the top end. I lost some of the small details like the room reverb on the drums during Radiohead’s Subterranean Homesick Alien through the Evo earbuds as well as some of the bottom end to give the track some body and depth.

That’s not to say these are bass-less. The track Savior on the newest Kendrick Lamar album is driven by a hard triple-thumping kick drum, and it certainly still bumps wearing the Evos. But there is more bass in Airpods. Overall, the sound quality isn’t in the same league as the Airpods Pro.

Our Verdict: Not Quite the AirPods Pro Killers

With the 1More Evo earbuds priced at $169.99 and considering the Jabra Elite 75t (which I’ve owned) and AirPods Pro are right around the same price (maybe roughly $30 more), we’d say go with the more recognizable names. I really enjoyed the fit and the extra battery life, but the sound quality and the microphone on my Airpods are too good to be dethroned by the 1More Evo earbuds.

Should You Buy 1More Evo Earbuds?

If the Evo earbuds were priced $30 cheaper, then the story would be different. But at the premium price point, you can get better-sounding earbuds elsewhere. Even if you aren’t an iPhone user like me, you can still find better-performing earbuds for Android users. 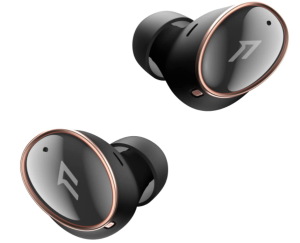 Buy Now on Amazon
review: apple's airpods pro are still a must for apple users