Wall art and movie posters are all well and good, but if you want to really feel like you’re living in the future, or in some magical world, get some wall decoration that does more than just stand there.

This 3D Star Wars print stands out by, well, looking like it literally stands out. A lenticular homage to The Last Jedi, the scene in this poster really seems to jump out at you, with Rey, Finn and Poe all posing iconically in the foreground while the Millennium Falcon flies overhead. It’s altogether an appropriately epic scene, and befitting its sci-fi subject matter, this piece of wall art also benefits from lenticular holographic technology, making it a strikingly futuristic bit of decor. 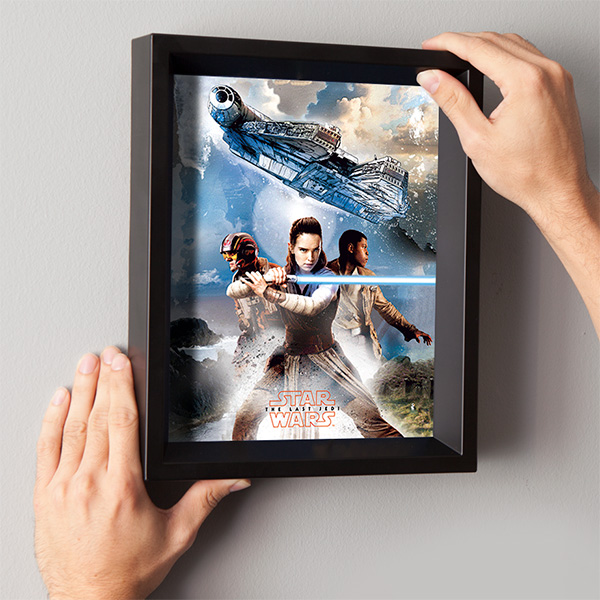 Is Star Wars futuristic? Well, it has starships and holographic flash drives and all kinds of intelligent droids, but then again it does explicitly take place in a mythic “long, long time ago,” so we suppose the answer must rely on your philosophical concept of time and eschatology.

It all depends, just like this lenticular image, on how you look at it. If time is circular, then in such a universe in which events eternally recur one could speak of a futuristic Star Wars, imagine the narrative of The Last Jedi taking place amid the days of future past… oh wait, wrong franchise.

Anyway, these are just a sample of the thoughts this trippy, oddly mesmerizing Star Wars print might inspire. No cannabinoids are strictly required for the experience, though no one is saying they won’t help.