If you’re missing movie theaters after 12 months of COVID-19, then you may have considered dipping into your savings to buy a kick-ass projector or OLED TV. Fortunately for all of us, Anker has a new projector for sale that only costs $600, far less than your typical home theater setup.

Thanks to a battery rated for 3 hours of playback, a pair of 3W speakers that have been tuned by Dolby, and smart TV software powered by Android TV and Chromecast, the Nebula Solar is fully self-contained. You don’t need to connect a single wire or piece of hardware to this Anker projector in order to have access to virtually every streaming service on the planet. But if you do want to connect an external source, it has a USB-A port, along with an HDMI input. It also has a battery that is good for roughly three hours of playback. 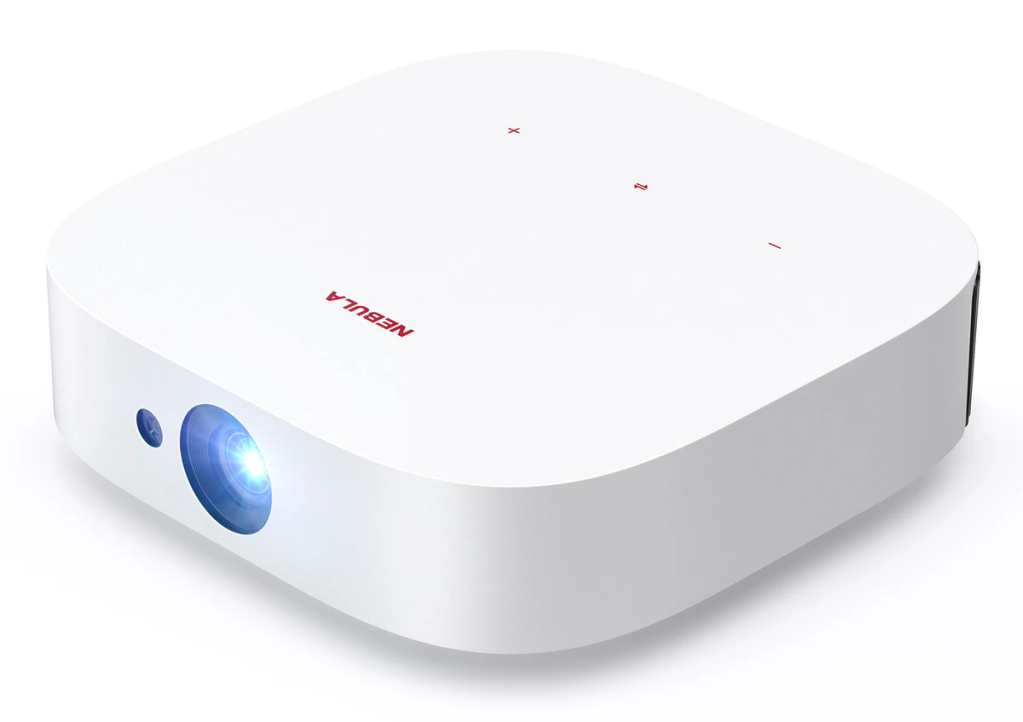 As the name and feature set might imply, this is not a home theater projector designed to be the centerpiece of your setup. But this also isn’t meant to be compared to a $200 pico projector that’s only meant to throw a dim 30-inch picture at the wall. It’s a projector that feels tailor-made for a very specific user: someone who isn’t overly fussy about contrast ratios or color accuracy and mostly wants something that they can just turn on and use without an elaborate setup process.

With this in mind, the goal here wasn’t to evaluate this like a high-end projector or TV. Instead, I tried to use it like most people will intend to use it: casually. And so I didn’t use special projection screens or create a special setup for this projector. Instead, I made it work with my existing setup.

And guess what? This Anker projector worked pretty damn well.

Anker Nebula Solar: What We Liked

To test this Anker projector, I waited until it got good and dark and then loaded up Steven Spielberg’s A.I. Artificial Intelligence, a 2.5-hour epic that continues to be polarizing to this day. But I digress.

The Anker Nebula Solar was incredibly easy to set up. In its current form, my apartment is hardly optimized for accommodating a 120-inch picture from a projector. But once I decided on a wall to project onto and a couch arm for my projector to rest upon (pro-level stuff, I know) I had the Nebula Solar up and running in under 10 minutes.

This is all thanks to the Nebula Solar’s auto-keystone and autofocus features. These are becoming increasingly common in projectors (especially portable projectors), but it works so well on the Nebula Solar that it’s worth mentioning. Within a few seconds of pointing the projector’s picture at a wall, a test pattern will show up and from there, the Nebula Solar will adjust the picture for height and angle. More often than not, you will get a perfectly aligned image. You may need to adjust for height or rotate the projector to make sure it’s pointed squarely at the wall (so that the image isn’t crooked). But other than that, I had to make few adjustments using its built-in kickstand. 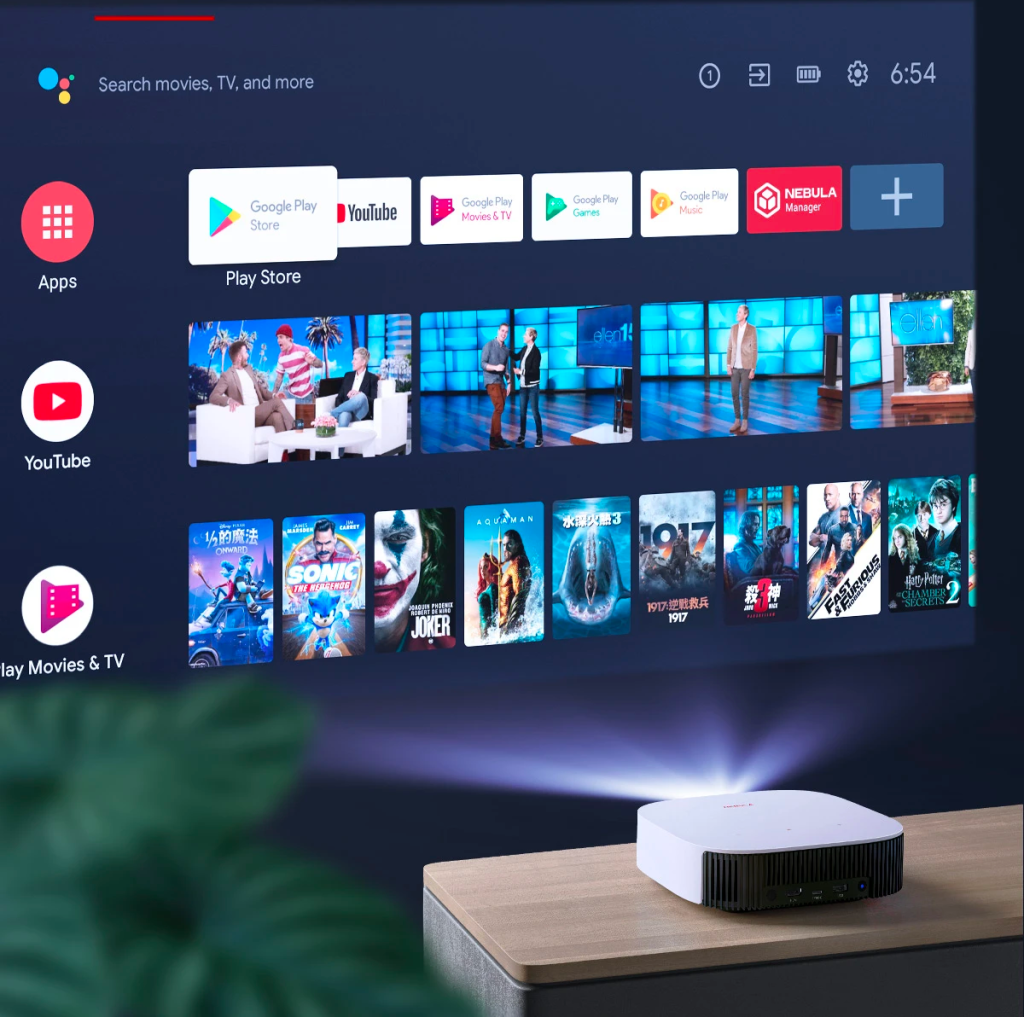 And while this Anker projector won’t fool you into thinking you’re looking at one of the best OLED TVs, I never found myself distracted because the picture was too washed out or too dark. In fact, I was pleasantly surprised by the out-of-the-box sharpness, detail and depth of color that the Nebula Solar relative to its size.

Speaking of size, the footprint of this Anker projector is impressive. While you might not be carrying this around everywhere you go, it’s certainly light enough and compact enough to throw in a bag (although we might try to find some sort of case or cover for it first).

As for the battery: It’s as good as advertised. I spent at least 30 minutes getting everything setup and deciding on a movie to watch. And I didn’t receive my first low battery warning from this Anker projector until the credits started to roll.

The biggest knock against this Anker projector is its general lack of brightness, which lessens the extent to which the picture really pops off the screen. It’s good enough that any sort of viewing in a dark (or very dimly lit) room will be totally fine. But stick this in a moderately bright room and this projector effectively becomes a paperweight.

This isn’t certainly the worst crime this projector could commit considering it isn’t aimed at a business audience, and we assume that the average person either intends to use this at night. Basically, you have to accept the fact that you can’t use this projector in a sun-splashed environment.

Along the same lines, the adjustability of the picture settings is pretty minimal on the Anker Nebula Solar. Of course, this Anker projector was created to appeal to types who don’t want to mess with picture settings, but that means you’re stuck with factory settings for the most part. While you can make adjustments for sharpness, keystoning and wall color, it would have been nice to at least provide the option to tweak things like tint and color on a basic level.

Our other medium-sized complaint is that despite running Android TV, you have to jump through a few hoops and sideload Netflix in order to stream shows from the service. Furthermore, video quality from Netflix does not come through in HD resolution, which is a bit of a bummer. Other major streaming services such as Hulu, Amazon Prime, Disney+ and HBO Max are up to par, But some may find the Netflix thing to be a bit of a hassle. This can definitely be remedied by connecting a streaming stick such as a Roku, but that will just mean your projection setup is less convenient and more expensive.

And finally, a couple of nitpicks: First, placing the touch controls on top of this Anker projector meant that we accidentally switched the projector into Bluetooth speaker mode more times than we would have cared to while adjusting its position. 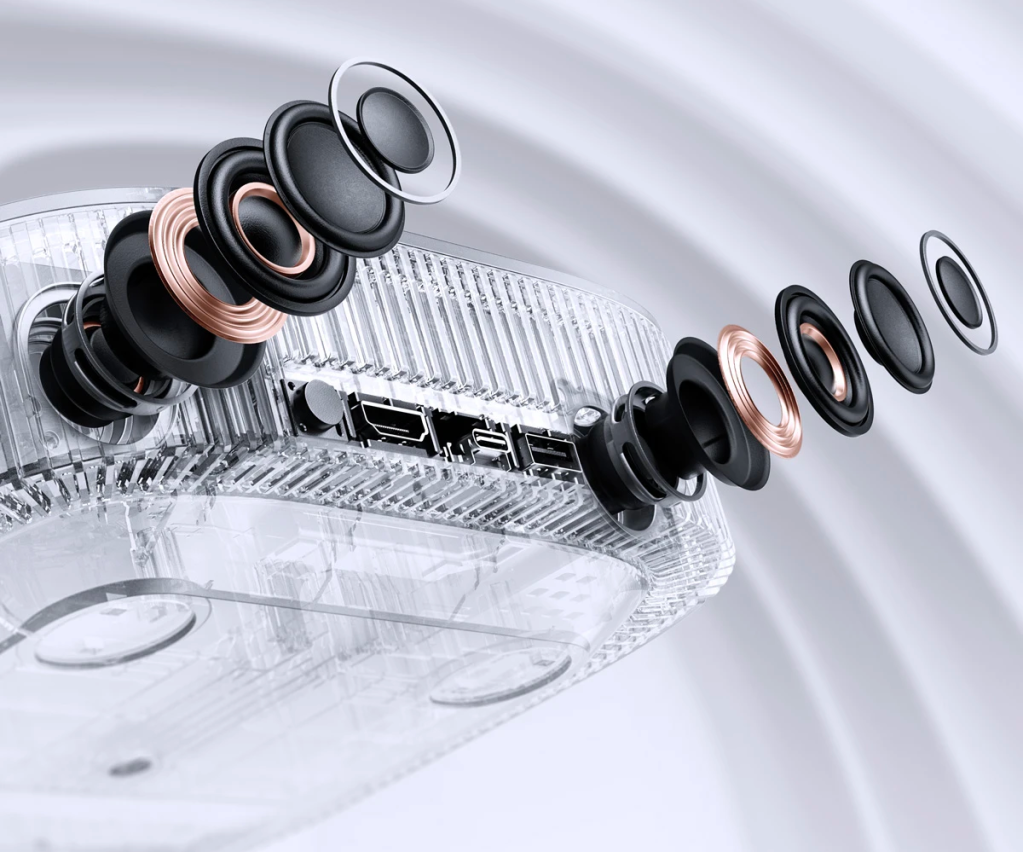 Second, we wish it was easier to connect an external speaker. The integrated speakers are serviceable, but hardly amazing, especially if this Anker projector is behind you. But the Nebula Solar lacks a 3.5mm audio out and connecting a Bluetooth speaker or soundbar is a confusing, unexplained process that forces you to disconnect the remote, then connecting the speaker. You can also use an external streamer with an audio out to connect wired speakers, but again, this just makes everything far less convenient and cost-effective.

The Final Verdict: A Great Projector for Outdoor Movie Night

At nearly $600, the Anker Nebula Solar is not a casual purchase considering you’ll only use it a handful of times a week at the most.

But while it’s definitely a splurge, the price is accessible enough that anyone looking to safely host an outdoor movie night for friends, or provide the family with a movie theater alternative can pick one of these up and use it in a variety of (dark) settings with minimal fuss.

Is this a projector that is going to leave home theater enthusiasts in a state of awe? No. But that isn’t the point of this. What makes this projector worth it is that it’s good enough in every way: The projector is small enough, the setup is easy enough, the picture is good enough and the price is affordable enough.

If I were looking for a shiny new toy to buy and loved going to movie theaters in pre-pandemic times, the Anker Nebula Solar is one product I would absolutely consider. While you will find other similar projectors that may be superior in any single aspect, the well-rounded qualities of the Anker Nebula Solar make it worthy of your time and money.