While Anker is a relatively new player in the very crowded audio equipment market, they add a lot of value with their Soundcore line of headphones, speakers, and wireless earbuds. The Life Q20 are the brand’s latest headphones, and they boast active noise-canceling, wireless Bluetooth connectivity, and a seriously stellar 40-hour battery life. Yes, there are other headphones that have these features. But, where Anker has other players beat is the unbelievable $60 price tag. The impressive battery life and active-noise cancellation are the big draws, but there’s a lot of small stuff that sets these headphones apart from others in this price bracket.

What’s In The Box

The box includes the headphones, a thin carrying pouch, a micro-USB charging cable, and a 4 foot auxiliary cord. The aux cord, ironically, is one of my favorite features of these wireless headphones. I’ve always been slightly apprehensive of wireless headphones because I was worried about running out of battery and having an unusable piece of audio equipment. With 40 hours of wireless battery life on the Q20, it shouldn’t be much of a concern anyway. But if you do run out of battery, you can use it in wired mode. That may seem like a small thing, but some headphones use battery even while plugged in. The Q20’s, however, can run off the wired connection without using the battery. That can be a lifesaver on a long haul flight if you were so busy packing that you forgot to charge your headphones. As for the other accessories, the carrying pouch is nice and portable, even if it’s not as protective as a hard shell case that often comes with other headphones.

The Nuts And Bolts

Appearance-wise, the headphones have a sleek matte-black look. The Soundcore and Anker logos are printed on the earcup and headband, but they’re very discreet unless you’re looking closely. I personally appreciated the minimalist and low-key branding. The headphones are controlled using buttons on the outside of the headphones. The on/off and noise-canceling buttons are on the left earcup, and the ports and volume buttons are on the right. The buttons are easy to access, although it might take a couple uses to familiarize yourself with the placement.

The round earcups have ample padding, making them comfortable, if a little bulky-looking. The headband is also well-padded and opens wide enough for anyone but the family from Coneheads. The headphones are turned on and off by pushing the power button for 3 seconds, and they automatically shut off after two minutes of inactivity (unless the noise-canceling is turned on). When you turn on the headphones, a voice tells you the battery level, which is mildly off-putting at first, but also very helpful. It uses Bluetooth 5, which connects very easily and has a good range. I can leave the phone in one room and walk to a different room in my apartment without any interference. One drawback with these headphones is that you cannot listen to them while they’re charging. 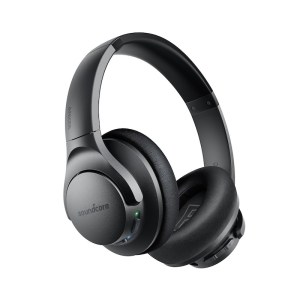 I was interested in seeing how well these headphones stacked up against Bose headphones, so I put them through a few side-by-side comparisons. The Bose headphones I was using were the wired QuietComfort 25s, which I’ve owned for several years. One of my favorite things about Bose, which the Soundcore also has, is their rotating earcups. They fold inward and rotate up to 90°, which makes them portable and packable. However, some of the packability is compromised by the Q20s considerable size compared to the slim QuietComfort headphones. The earcups of the Q20s are comfortable, but not as comfortable as the QuietComforts. Even though the Bose headphones are less padded, they have a more natural oval shape compared with the round earcups of the Q20s.

Pound For Pound On Sound

The noise-canceling of the Q20s is pretty good, but it’s undoubtedly not as powerful as Bose. In a busy cafe, I could still hear conversations, music, and ceramic mugs clinking together. The noises did get quieter, but if you’re looking for the silence of a monastery, then you’re better off sticking with Bose. As for audio quality, the Q20s don’t offer Bose-level sound, but the bass is deep and the overall sound is crisp. There’s also a bass boost that’s activated by pressing the multi-function button twice, but you probably won’t need it since the bass sounds good and deep in regular mode. The differences between Bose and Soundcore are noticeable, but it’s worth keeping in mind that I’m comparing the Q20s to headphones that are priced anywhere between 2 times the price for the older, wired Bose headphones and 6 times for the newest wireless models. 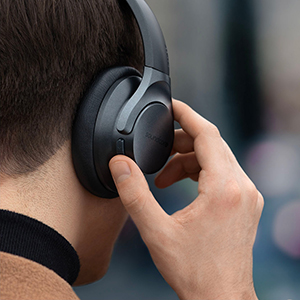 It’s not surprising that $60 headphones aren’t as powerful as their $350 counterparts. But it might be surprising that they’re not that far off. I say might, because it didn’t really surprise me that something made by Anker would be well-made, powerful, and thoughtfully designed. The buttons are easy and intuitive and the headphones are good looking. You can use the headphones on a dead battery with the provided aux cord, or wirelessly through quick, responsive, and far-ranging Bluetooth. And, true to a company that’s known for making battery banks, the battery life is seriously impressive (I still haven’t plugged them in since their initial out of the box charge). For $60, you get a pair of headphones that punches well above its weight class.