Quarantining at home ain’t fun. It’s the right thing to do, but that doesn’t make it any easier, especially after five months (without a real end in sight). We’ve tried reading. We’ve played Animal Crossing. We’ve gone on walks and watched movies and picked up new hobbies. Done, done and done. But, at a certain point, you get tired, and soon your energy to try new things begins to wane into the realm of, “Meh, maybe sometime tomorrow.”

So what’s something new and fun that you can do at home? Something that’s also safe and easy? Watching a movie! Okay, shoot, not all that revolutionary. Let’s try that again. Watching a movie outside with a projector! Bingo.

BenQ offered to send me their latest projector, the GS2, for review and I’ll admit, I was excited for a shiny new thing to do during the ongoing quarantine here in California.

So I grabbed my Bluetooth speaker, some friends, some ice cream (proper snacks are paramount) and got ready to watch. 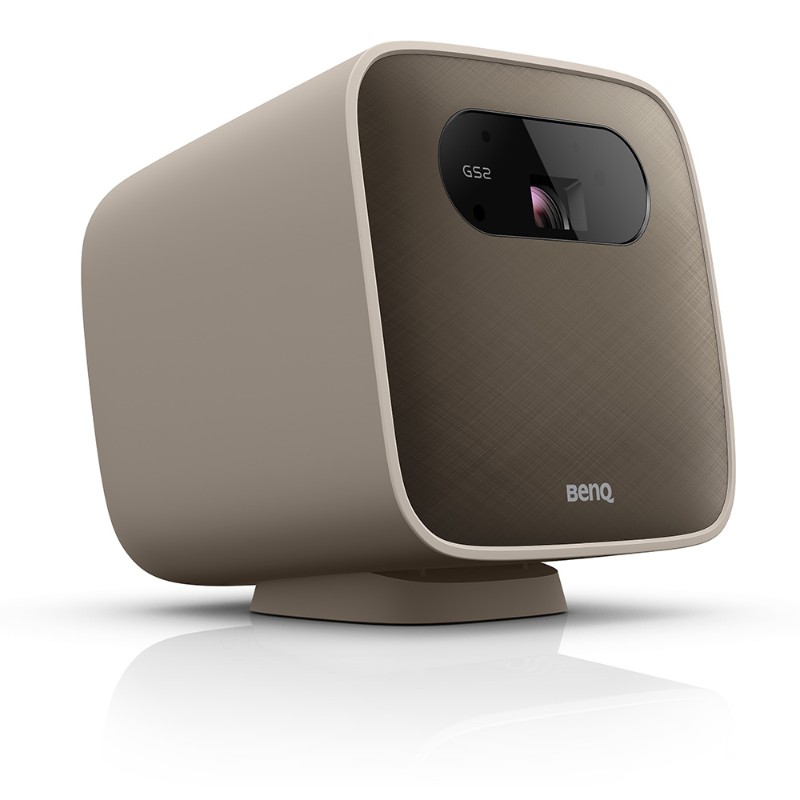 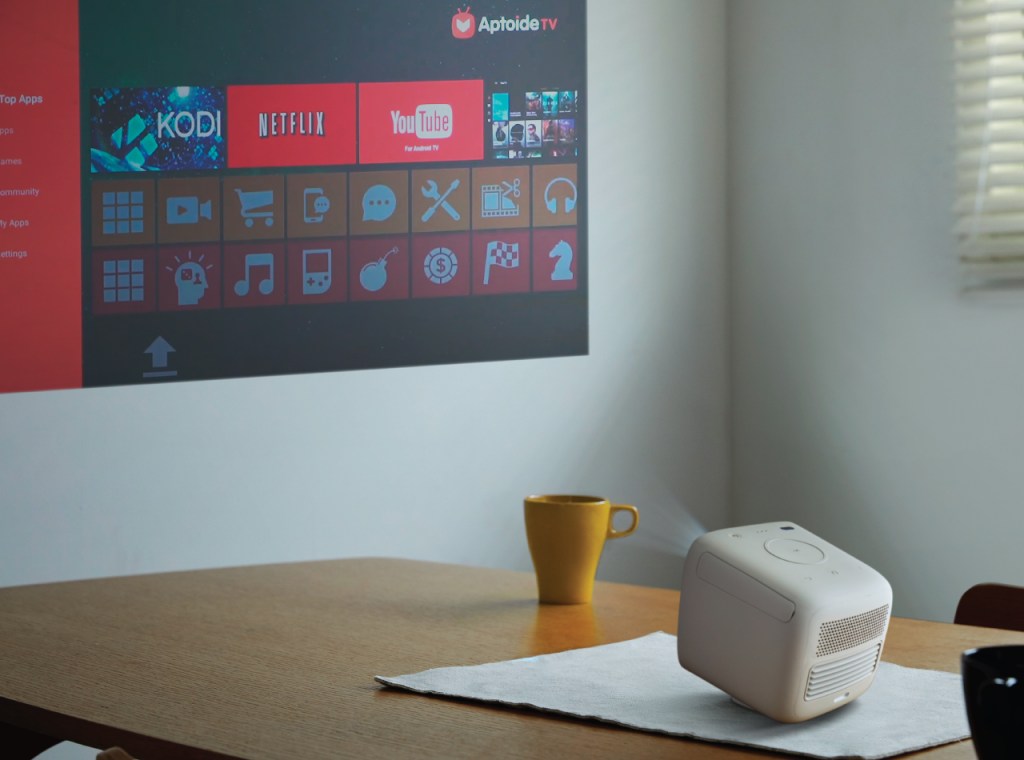 The GS2 is a tiny thing, hardly bigger than a can of soda both in width and height. Likewise, it’s lightweight, tipping the scales at a manageable 3.5 pounds. It packs two 2W Chamber speakers in the back, provides 720p video resolution(1280 x 720 pixels) and has 500 lumens to keep images bright and crisp.

The device itself does not boast a “zoom” feature, however it’s so light that picking it up and moving it closer or further away from the screen is easy. You can easily connect to it via Wifi or Bluetooth 4.0, as well as HDMI, USB Type-C, USB 2.0 (Type A) or an auxiliary cable. All of which is to say, however you want to watch, the GS2 can accommodate.

The device also comes with a very convenient travel case, which is the size of your average lunch box. In it, you can fit everything you would need to get the projector up and running, which I found to be very convenient when using it with friends.

Setting Up the BenQ GS2

Before I could even think of popping some corn, Postmate-ing some ice cream and selecting a movie, I needed to first set up the projector. Overall, the process was simple. The GS2 walks you through set up quickly and efficiently, having you enter WiFi among other minor settings before you’re good to start using the device. The one caveat is that unless you’re indoors (without much light), you’ll have to wait until it’s dark to even set it up. I tried using the GS2 outdoors during the day and couldn’t see a thing; the screen just isn’t bright enough. But, I didn’t have a tough time setting up inside my apartment, pointing the projector up towards the ceiling while navigating the interface.

The only annoying aspect of the setup was utilizing the included remote. It’s not to say the remote was bad, but it’s a little slow. And when it comes to adding a WiFi password that can have a fair amount of characters, that lag is annoying. BenQ has a solid array of apps available on the Apple App Store; I wish they would utilize their apps like the way Apple TV does when updating lengthy info. It’s so much less tedious to input passcodes on via mobile.

After setup was complete, I decided to test out my new projector. Evening was still a few hours away, but having a fully-functioning projector in hand was too exciting to wait until then. Without needing to read the directions, the projector’s menu guided me into using screen mirroring with my iPhone. A few quick swipes and taps on my phone and suddenly my home screen was projecting on my ceiling. Neat. Of course, you don’t buy a projector just to use your phone, you buy one to watch cool stuff. So I found a music video I liked and hit play. Unfortunately, I couldn’t get any sound. Even though the GS2 comes equipped with a speaker, I couldn’t get it to play any audio.

After more fiddling around in the Sound Settings, I was able to connect my projector to my favorite Bluetooth speaker. The process was as easy as one would expect, and within no time everything was connected. However, my troubles didn’t stop there. Upon playing the music video again from the top, I couldn’t help but notice that there was a lag between the sound and footage. After trying to stream a show on Netflix through my phone (only to get the same result), I chalked it up to a poor Wifi connection in my apartment and decided to wait until the evening to test out a full movie.

Let’s All Go to the Movies

The sun finally set and a few friends and I set up in my backyard to watch a movie. In lieu of an actual projector screen, we used a sizable blank canvas my artsy roommate had lying around. And much to all of our surprise, it worked great. Like, really great. As soon as I flicked on the projector, the entire party (myself included) audibly gasped at how clear the picture was. And though the keystone was a little off when set to auto, I found it easy to dial it back or forth myself from the Settings Menu.

Eventually, my friends and I settled on Parasite as our go-to testing movie. Initially, we tried streaming a movie through Netflix, but yet again, the problem of the lips not matching up with the voices came into play, so we opted for a hard-line route. A friend happened to have downloaded Parasite on a thumb drive, and thanks to the convenience of the GS2, all we had to do was insert the drive into the side of the device to get it up running. Unfortunately, yet again, we were plagued by slow sound compared to the picture.

To remedy the situation, I used an auxiliary cord which I had handy. It was more luck than anything, especially considering that my Bluetooth speaker even had an AUX in/out outlet. With the promise of Bluetooth connectivity, I was hoping this would all work a bit smoother. I even tried using a few different speakers to see if it was maybe it was the speaker and not the GS2, but alas, all speakers provided the same laggy result.

However, once we got the sound situation set with the AUX cable, I found the experience to be an excellent one, and one I couldn’t wait to share with other friends and family. The picture was easy to adjust, either going into Settings to play around with the keystone or picking up and moving the projector back and forth as needed. Thanks to the fact that the projector can run off of a battery, I didn’t need to worry about a long extension cord or any available outlets outside.

And speaking of batteries, it surprisingly held up well. Between fiddling around with the projector, debating a movie and watching Parasite in its entirety, the GS2 only used up 60% of its battery. That’s not bad at all for something that is rechargeable. Especially considering it’s rare you’ll watch more than one movie in a row. If you did find yourself in a situation where you wanted to watch another movie, you could likely eek it out, or connect the projector to its charger during a brief intermission.

The Verdict: Is the BenQ Portable Projector Worth the Money? 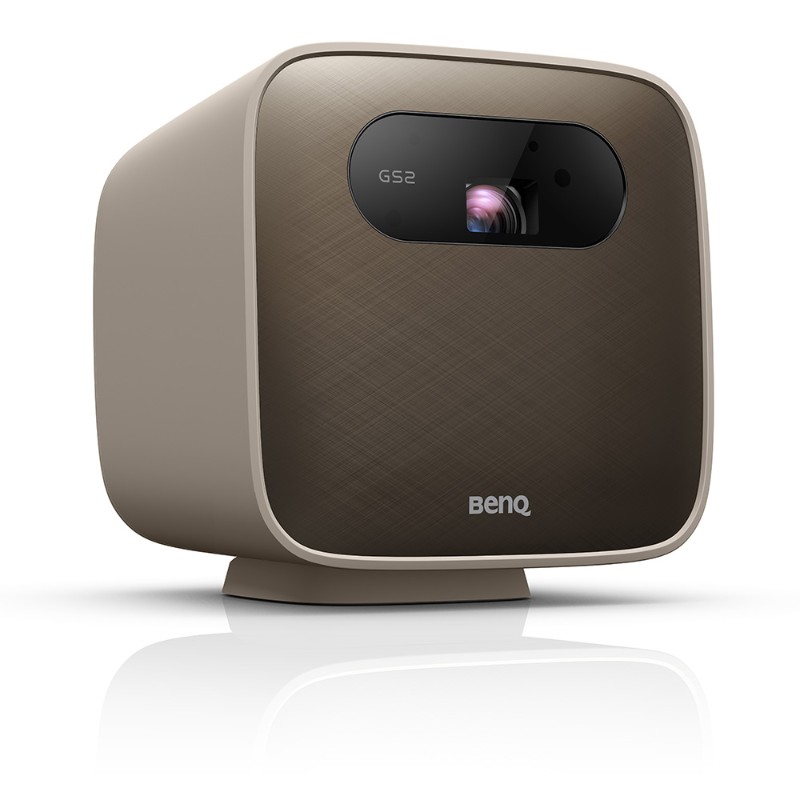 Overall, BenQ’s GS2 projector is a solid piece of hardware that can turn any backyard space into a private movie theatre. It’s easy to use once set up, and the picture quality is surprisingly crisp for such a portable projector. That said, the GS2 is not without its faults. Though it’s not the most expensive projector out there, it still costs $600 (before tax) and at that price, I was hoping the Bluetooth connection and screen brightness would’ve been a bit better. But, if you own an AUX cord that can connect to a portable speaker, and if you’re fine to use this device only at night or indoors, the GS2 should suit you well.

Especially in times of quarantine, spending time outdoors with loved ones is a must. If you’re sick of just sitting there and chatting, I’d highly recommend watching a movie. As we were cleaning up my friend Taylor turned to me and said, “Honestly, that was the most care-free Saturday I’ve had in a long time.” I couldn’t agree more.