If you’re a TV person, it’s always a good time to invest in a new set. And if you’re in the market for a new small screen, we recommend going with a 55-inch model that is the preferred size for most residential living rooms and larger bedrooms.

What size TV screen to get depends largely on the size of the room where the TV will be placed. For a 55-inch screen, it’s suggested that viewers sit between seven to 12 feet away from the TV. This is less for 4K screens, which don’t put as much strain on the viewers’ eyes and therefore allow for a shorter distance of 4.5 to seven feet. We also like 55-inch screens because they fit into most media centers. At 55-inches, customers also have a wide range of options for price points, capabilities (HDR vs 4K, QLED vs OLED) and useful features, including smart TV capabilities.

For more on which 55-inch TVs deserve your hard-earned money this year, check out our best-of list below.

For a smart TV that delivers a crisp and clear image, we recommend the SAMSUNG 55-Inch Class Crystal UHD TU-8000 Series. The updated Samsung has an ultrafast 4K crystal processor that provides a vivid and clear picture. The smart TV also has Alexa and Bixby built-in, giving users the ability to control their new Samsung through voice activation, including changing channels, searching for movies, playing music and recording TV shows. Powered by Tizen, users can access next-generation apps that enhance their viewing experience. The newly revised Samsung also includes HDR capabilities to deliver crystal-clear colors. 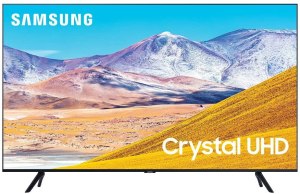 For an affordable introduction into the world of smart TVs, we recommend the TCL 55 Class 6-Series Smart TV. Built with LED color technology, the TCL projects bright and vibrant images and delivers movies the way they were intended to be seen on the big screen thanks to performance-enhancing QLED technology. Users can also access the 4K ultra HD picture in conjunction with Dolby Vision HDR for lifelike images that jump off the screen. The edgeless design allows viewers to become fully immersed in their entertainment, which they can choose from thousands of apps using built-in WiFi or Roku TV. Gamers will appreciate the special gaming mode that offers the best picture settings for video games, including smooth action and low latency. The TCL makes it easy to connect the TV to other units thanks to four HDMI inputs, one USB input, an optical audio output, and Ethernet output.

Cons: The TCL may not be the best choice for users who watch live sports because of occasional blurriness with motion settings. 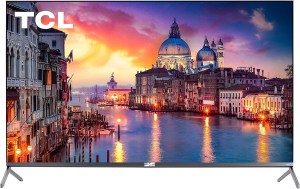 As one of the global leaders in TVs, Sony continues to lead the charge of bringing breathtaking visuals into customers’ homes with the X750H 55-inch 4K Ultra HD LED TV. The Sony features a 4K processor that delivers real-world detail thanks to a 4K database. Even shows and movies filmed in HD are instantly upgraded to a higher picture quality thanks to the Processor X1. A smart TV, the Sony has android capabilities that allow users to pair the unit with their Google Assistant, enabling voice activation for everything from managing tasks, controlling other smart devices in the home and searching for shows, movies and music. Ideal for sports fans, the HDR Sony also has Motionflow XR240, which reduces blur even in fast scenes, delivering lifelike motion and visuals. The TVs’ Triluminous display ensures that colors are seen just as they were intended by TV and movie makers.

Cons: The Sony is not Alexa-compatible. 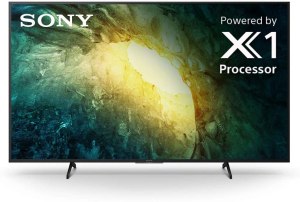 For a TV that offers a fully immersive viewing experience, there’s the LG 55″ 4K Ultra HD Smart LED TV. The smart TV is built with a Quad-Core Processor that reduces blurring and improves action and images, making this a great option for sports fans. The LG Thinq is one of the only TVs that is compatible with both Alexa and Google Assistant, giving users the option to use voice activation when controlling their TV or other connected smart devices in the home. Designed to work with the latest movies and cinematic classics, the LG has 4K Active HDR and includes picture by picture adjustment to deliver scenes as they were intended to be viewed. We also like that the LG has Airplay 2, which enables users to easily cast films, shows or video games from their Apple iPhone or laptop onto the TV.

Pros: Features a Quad-Core Processor for better sound and picture quality, compatible with both Alexa and Google Assistant, includes Airplay 2 for Apple users. 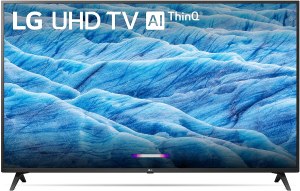