Emmy award-winning, critically-acclaimed storyteller and remarkable chef Anthony Bourdain brought the world closer through his passion for food, cooking and, of course, the parts unknown to the rest of us.

Bourdain was found unresponsive and eventually passed on June 8, as he was in France filming for his award-winning CNN docu-series “Parts Unknown,” according to CNN. He will forever be remembered by countless friends, family, celebrities and avid fans of his work for being dedicated to his craft unlike any other.

Bourdain extended his talents past being a chef to becoming a world-renowned storyteller and has blessed us with multiple ways to indulge in his work. Here are five Anthony Bourdain shows and documentaries you can stream right now as you reflect upon and celebrate his larger-than-life time on this earth.

1. Wasted! The Story of Food Waste 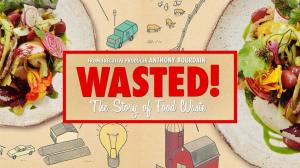 Earning its rightful score of 100% from Rotten Tomatoes and five stars on Amazon, this documentary follows the worldwide food industry and its mind-boggling 1.3 billion tons of food that gets thrown away every single year. Bourdain, as well as other chefs and filmmakers, dive deeper into this dilemma in an attempt to figure out why it happens and how the industry, and we, can become more conscious about it. This 90 minute doc is packed full of info that is sure to make you rethink your current food-related habits.

Wasted! The Story of Food Waste 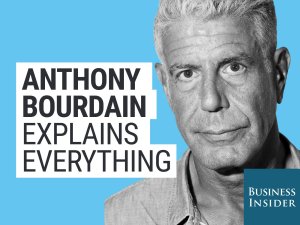 This mini-series only released one season consisting of seven, two-minute-or-under videos where Bourdain explains (almost) everything from how to cook the perfect egg to what it’s really like to take the drug LSD. Although short, these episodes are addicting and are full of Bourdainian wit and charm. It will only take you about 11 minutes to watch the entire series, and it’s free for Amazon Prime members to binge-watch right now.

3. The Layover With Anthony Bourdain 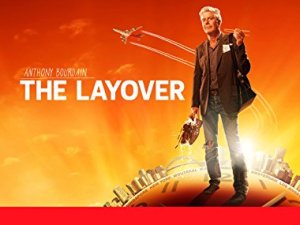 Spend your long layovers watching Bourdain do what you could be doing – exploring the hidden gems and absolute best places to eat in some of the biggest foodie cities in the world. This two season installation offers 20 episodes all just under 45 minutes and is ideal for foodie travelers. From LA to Singapore and nearly everywhere in between, Bourdain uncovers the places you should highly consider trying during your next adventure.

The Layover with Anthony Bourdain 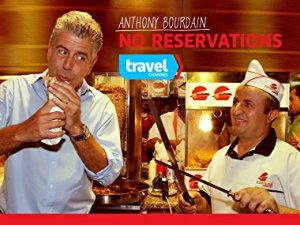 After watching No Reservations, you’ll feel like you just traveled the world of unusual and unique food. Capping off at 15 incredible seasons, Bourdain truly did not hold back when it came to trying some of the craziest, culturally-significant dishes. Each episode is around 45 minutes and focuses on a specific country, region or area around the world where he not only learns about their food, but their culture and norms as well. 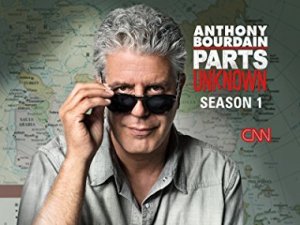 Last, but certainly not least, is the multi Emmy Award-winning docu-series that has aired on CNN for 11 seasons and what Bourdain was working on up until his last moments. Join Bourdain as he travels across the world and brings to our attention the otherwise unknown, yet fascinating places the rest of us have yet to explore.

These shows all show Bourdain as brave, selfless and dedicated to telling an amazing story for us viewers at home, while also telling the stories of the people and places he visited along the way. We will forever remember him for the mastermind he was and luckily, can live on and remember Anthony Bourdain’s legacy one episode at a time.

Check It Out: The Best Gifts For Foodies