An audio mixer is a crucial piece of equipment for recording studios and live performances, but it can be difficult to understand the difference between, for example, a mixer, an interface and a preamp. For starters, an interface acts as a bridge between an analog signal and a computer, and a preamp helps amplify the signal into the amplifier which allows a signal to be strong enough to be received by an amplifier and speakers.

But a mixer is capable of more functions, which is why mixers typically have a lot of knobs and sliders. This can make mixers seem intimidating, but they ultimately perform a fairly simple function. Mixers take multiple signals from guitars, microphones, or whatever other sources, and turn them into one or more outputs.

Feeding all of the signals from instruments and microphones into the mixer allows you to easily control things like the volume from the mixer. Many mixers go beyond simply providing balanced sound, though. You can often use a mixer for artistic flourishes, such as creating effects like reverb and delay. Small mixers with effects can be great for home music recording, as well as live performances.

Beyond singing or playing instruments, mixers are handy for other applications. If you’re a DJ — whether live or on the radio — you’ll need a mixer to seamlessly transition between different tracks. Mixers are even handy in non-music situations, such as using a PA or for podcasting. Read on for some of our favorite mixers.

This mixer from Yamaha has 20 inputs, making it capable enough for performances and larger home studios. It also has built-in digital effects, high-pass filters and three-band equalizers. There are enough features to precisely control the quality of the sound and add unique effects. Compressors are kept to a single knob, making it easier to maintain the quality of the sound. An added convenience is that you can plug directly into your computer using the USB output. 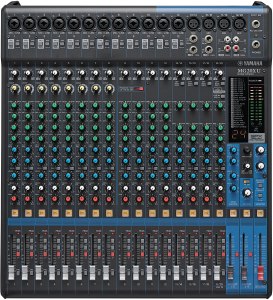 This small mixer from Alto is small and lightweight enough to take on the go. But with eight channels, it’s capable of handling recording sessions and live performances. In addition to balanced sound, Alto’s mixer provides a variety of digital effects. Professional features include high headroom, which helps reduce distortion and the three-band equalization for each channel. Alto also considered live music and DJing when designing this board — knobs that vary in color and bright LEDs make it easier to see in low light settings.

Cons: The headphone channel is not separate. 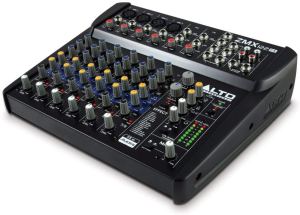 This audio mixer from Pyle is a great option for taking on the go, thanks to its USB and MP3 compatibility. It even has a built-in Bluetooth receiver for wireless mixing. There are a total of eight channels, making this a versatile option despite its compact size. It supports XLR as well as unbalanced 1/4-inch plugs. Plus, the built-in digital effects allow you to experiment with your sound.

Pros: Plenty of connectivity options including USB and Bluetooth connectivity. Easy to take on the go.

Cons: Setup to a computer can be wonky. 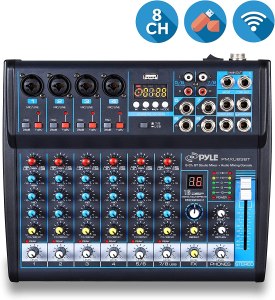