Getting unwanted calls from telemarketers, political groups, scammers and robocalls can be a nuisance, but for many members of the population, they can also be dangerous. Scammers all over the world are targeting seniors and retirees, and many of these scams begin with a phone call. Often, the caller will pretend to be from the IRS or a charitable organization. That’s why if you or someone in your family has a landline, you may want to invest in a call blocker.

Call blockers often come with hundreds and sometimes thousands of phone numbers that are known to be part of robocalls and scam operations pre-stored, instantly stopping them from coming through a landline. Call blockers also give users the ability to add phone numbers to their block list, which will stop calls from coming through in the future. Unwanted calls can be annoying for shift workers who sleep during the day and new parents who don’t want their baby’s sleep schedule interrupted by a loud call, but call blockers can also provide a safety net.

For many people, incessant and unwanted calls can lead to homeowners turning off their phones and missing important communication from friends, family and medical professionals. Scam artists often prey on callers and older Americans who may not be aware they’re being drawn into a scam, inadvertently handing over important information. These calls can also upset elderly homeowners and those who suffer from mental health issues, with both groups possibly becoming confused and agitated by the information they’re being given.

If you still use a landline and are tired of unwanted calls, it’s time to make a change. Check out four of the best call blockers below.

Easily block calls from anywhere in the home using the CPR V5000 Call Blocker. The CPR comes with 5,000 robo numbers from the FCC already pre-programmed into the device, helping to immediately cut down on unwanted calls as soon as the blocker is installed. Users can block an additional 1,500 phone numbers, including private, international and unknown numbers. No main power source is required and the CPR can be powered directly through a landline. The CPR is compatible with all U.S. landlines and home phones. Numbers can be manually added or removed within the block list and users will appreciate the large 3-inch caller display screen.

Pros: Users don’t have to be physically next to the CPR to activate the call block function. They can easily block any phone number simply by pushing #2 on any cordless landline.

Cons: Caller ID service from the users’ phone provider is required for the CPR to work and the CPR does not include a White List of approved phone numbers. 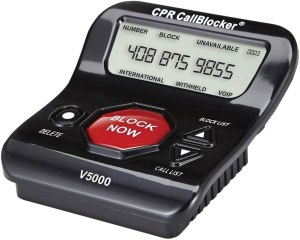 Block thousands of unwanted phone calls using the seriously impressive Panasonic Call Blocker for Landline Phones. The Panasonic has a large display screen and will blink red when an unknown phone number comes through. Users can answer or block the phone number simply by pushing the ‘Block Call’ button. For those who want an audio feature, the Panasonic can loudly announce in English or Spanish the name of the caller if known and/or the phone number. Users can create their own database of 100 approved phone numbers, which will set off a blinking green light on the unit when the calls come through.

Pros: The Panasonic comes with the largest internal memory, including 14,000 pre-programmed blocked numbers and enough space for users to add an additional 2,000 phone numbers.

Cons: The Panasonic has a big price tag and users must be next to the unit in order to activate the block feature. Unlike the CPR, phone numbers cannot be manually added to the block list. 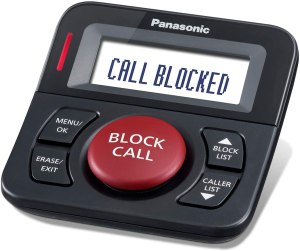 Block and approve phone calls with the user-friendly MCHEETA Premium Phone Call Blocker. Compatible with most phone service providers in the U.S., the call blocker has a 4,000-phone number capacity. Phone calls without caller ID or coming from unknown numbers can easily be blocked by pushing the large red Block button. Users can scroll through their call list, adjust the brightness of the large display screen and delete incoming calls. The Mcheeta also has a White List or Allow List that lets users highlight numbers from known sources.

Pros: Like the CPR, the blocking feature can be done from any phone in the house by simply pressing * when an unwanted call comes in.

Cons: The screen doesn’t have much backlighting and can be difficult to read. Users may also find it confusing as to whether they’re scrolling through their Block List or call history. 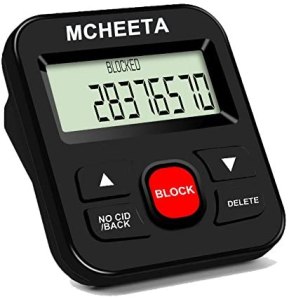 For an affordable and easy to program option, we recommend the Sentry 2.0 Phone Call Blocker. Ideal for users who want to customize their list with White List and Blacklisted numbers immediately, the Sentry allows customers to add approved numbers and arrives with blacklisted phone numbers already programmed into the Black List. However, most spam calls will be blocked regardless of whether they are already on the Black List.

Pros: If a new phone number contacts the homeowner, Sentry plays a recorded message before the phone rings, warning spammers and telemarketers to immediately hang up.

Cons: Sentry has a Black List capacity of 1,500 phone numbers, which is lower than other models on our list. The Sentry does not always work well with Panasonic brand phones. 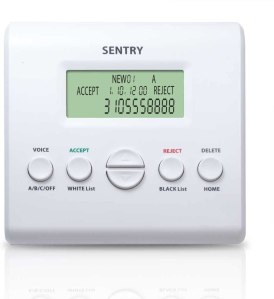