Driving while distracted is a big no-no, which can be challenging considering how many distractions we’re constantly confronted with. Fortunately, every modern car comes with built-in features that allow you to stay connected while keeping your eyes on the road and your hands on the wheel. If you drive an older car, you don’t have to sacrifice those modern comforts. One of the best ways to stay connected if your car doesn’t have modern tools is with a Bluetooth car speakerphone. They’re easy to take on the go, meaning that they can double as a speaker for a conference table or even as a portable music player.

These speakerphones feature the latest in Bluetooth technology to allow for a fast, multi-point connection and can automatically pair with your phone. Many of these options can pair with two phones at the same time. These also feature built-in motion sensors that turn on automatically and connect to your phone once you open your car door. Since these speakers are powered by rechargeable batteries, you can use them completely wirelessly for extended periods.

Since call quality is the most important feature, these devices deliver clear sound while reducing echo and feedback. Without further ado, here are the best Bluetooth speakerphones.

The key to any device that is designed to reduce distractions is that it can’t itself be a distraction. This Bluetooth device only has two buttons on the interface — one is a mute button and the other is a multifunctional button/volume knob. Voice commands make it easy to use Google Assistant or Siri. A motion sensor allows the device to turn on as soon as you open your door and off once the Bluetooth connection is lost.

Pros: Can connect to two phones at once. One of the only options with a volume knob instead of buttons. Can be used to control Siri or Google Assistant. Wireless operation and a long battery life. Auto on/off feature. 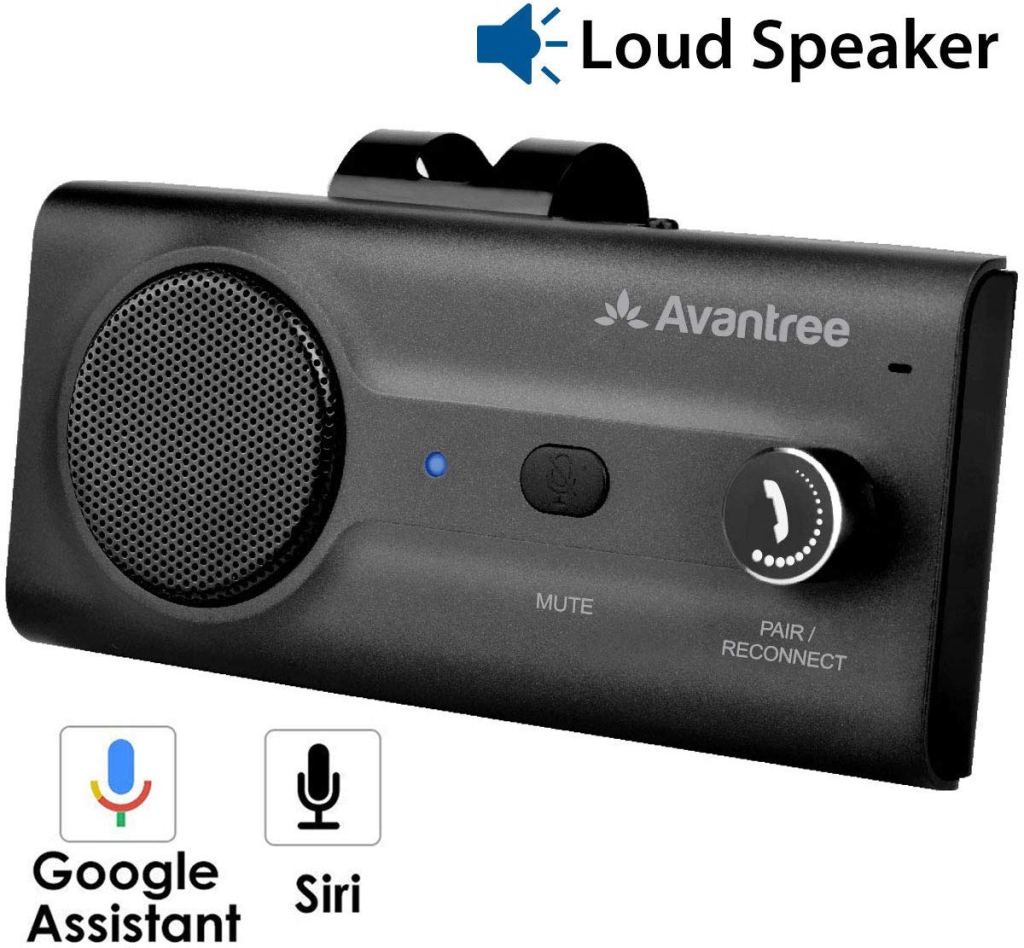 Besign’s speakerphone utilizes Bluetooth 5.0 for reliable connections and reduced power consumption, meaning you can use it for up to 20 hours of talking time. It features dual speakers to ensure that it’s easy to hear the call. You can also pair two phones at once. Besign’s speakerphone also works with Siri or Google Assistant.

Pros: Auto power on and reconnect with the motion sensor, Siri and Google Assistant compatibility, supports two phones at once.

Cons: Sound is loud, but could be better quality.

Like some of the other options on this list, this speaker connects automatically to your phone once you enter your car. You can use Siri or Google Assistant commands with this device, including rejecting or accepting incoming calls and making calls. It can be clipped to the visor, but it’s small enough to be placed elsewhere within reach.

Pros: Sleek design. Automatically turns on and off when in proximity or out of range of the car. Supports voice commands through Siri or Google Assistant. 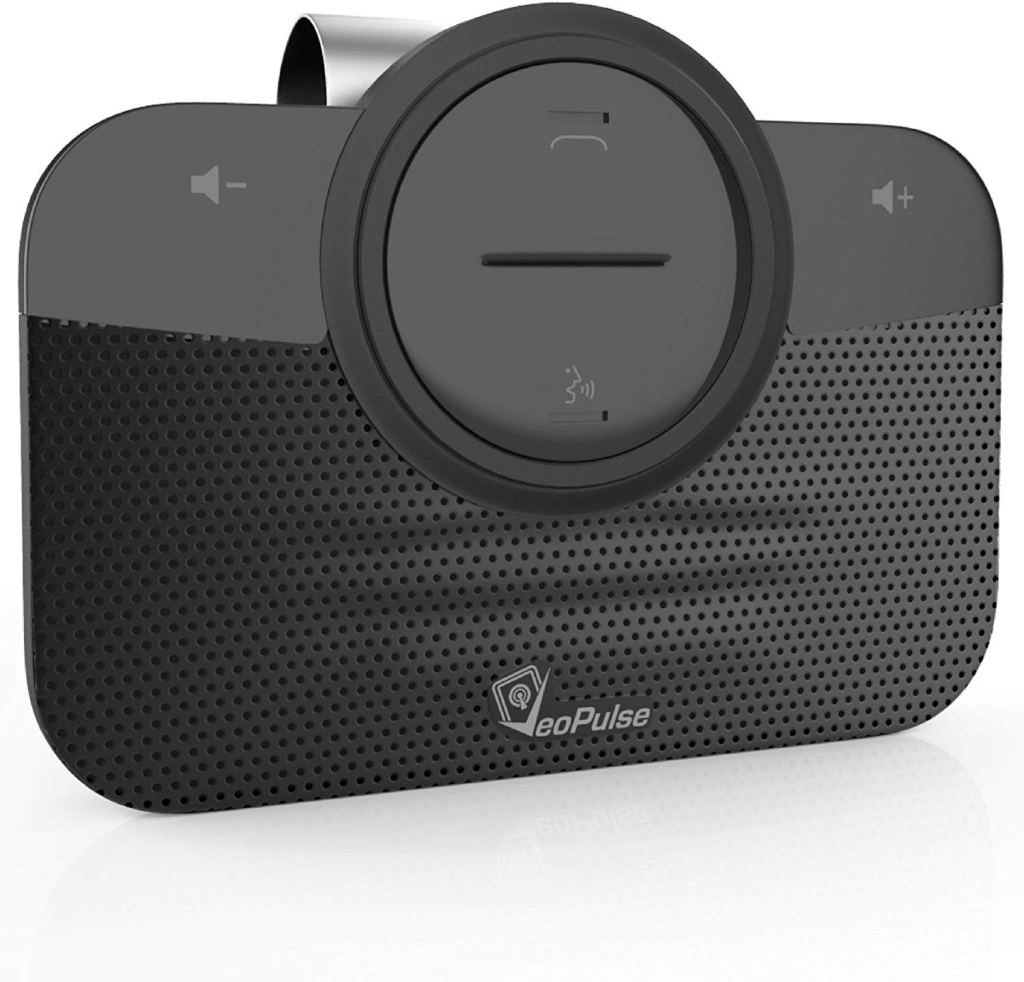 Like the other options on this list, this speaker set easily clips onto your car’s visor, and the small design makes it easy to use in other places as well. It can be connected to two phones at once, and you can use Siri or Google Assistant for voice commands. That allows you to make or take calls, and it can also be used for music or to provide turn by turn navigation instructions.

Pros: Sleek and compact design, connects to multiple phones at once. Comes with a dual USB-cigarette-port charger. Auto turn on when you get in the car. 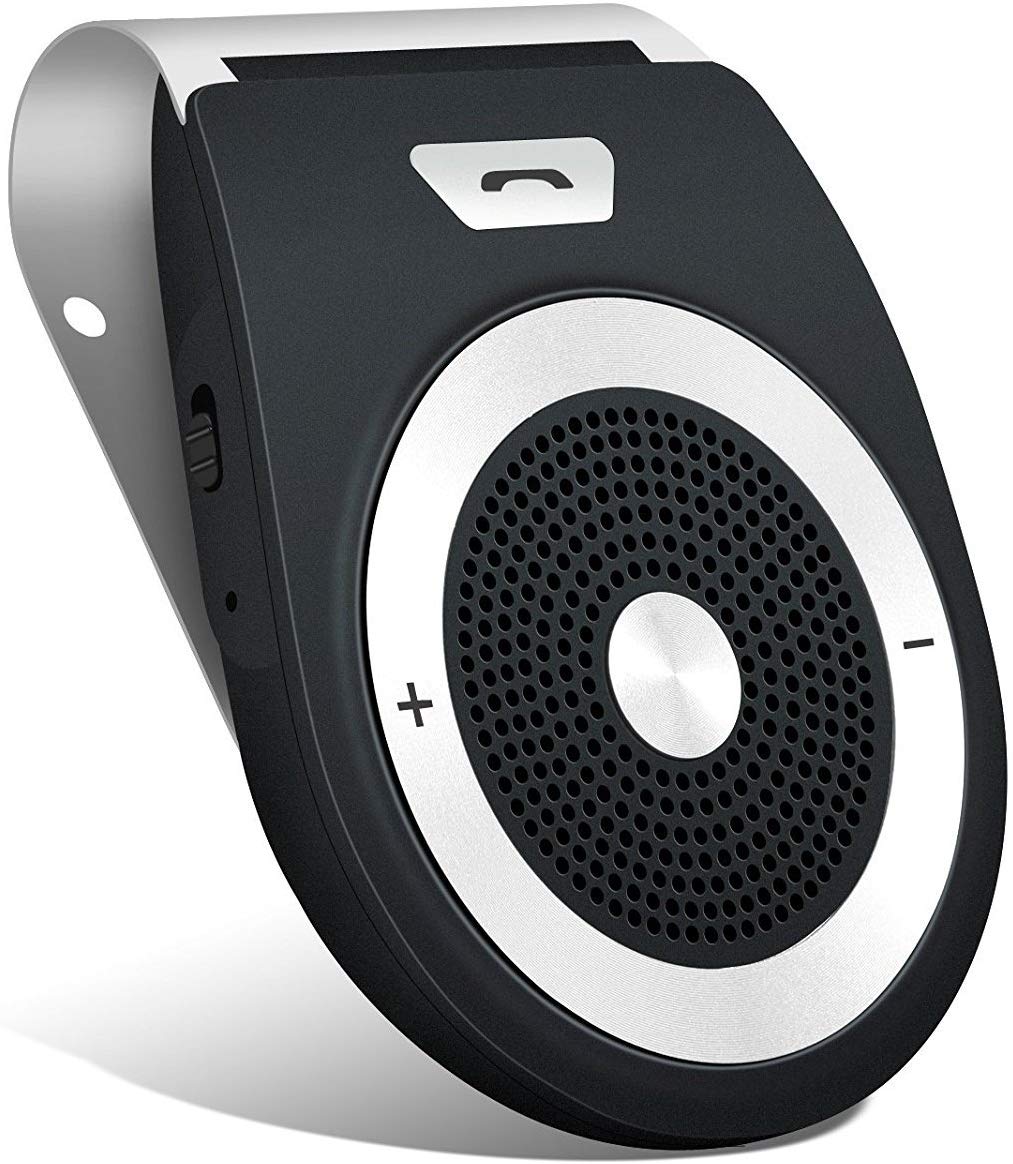