Starting to build a record collection is pretty easy and fun — you can pick up your favorite new releases at the local record shop or scope out some great deals on classic LPs at the thrift store. But finding the gear you need to actually play those albums? That can feel a lot more like a chore. And once you start getting into preamps and cartridges and receivers, you’ll find that record collecting can be an expensive chore. Fortunately, it doesn’t have to be, if you invest in one of the best cheap record players.

At the very low end of the record player market lies the stuff you’re probably best off avoiding. Some cheap record players don’t compare to an album’s digital version, let alone how it should sound on vinyl. But you also don’t have to spend too much to get a good turntable. You can find some good options in the $100 – $200 range.

We’ve rounded up some of the best cheap turntables that’ll allow you to make the most of your growing record collection without emptying your bank account.

Audio Technica is one of the best brands when it comes to value turntables that are worthwhile. The brand has a long history and experience in audio gear, and the AT-LP60X is a user-friendly option. The tone arm automatically starts playing the record with a push of a button, and you can also lift the needle with the up button to “pause” the album. 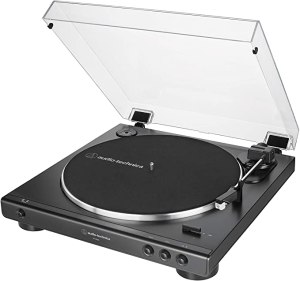 The Sony PS-LX310BT turntable isn’t cheap cheap, but it’s a great value for all of the features that are included in the turntable. The switchable preamp allows you to add a preamp later if you want to, and you can connect to your headphones or speakers using the built-in Bluetooth. Plus, you can even use the USB port to rip high-quality digital versions of your favorite albums. 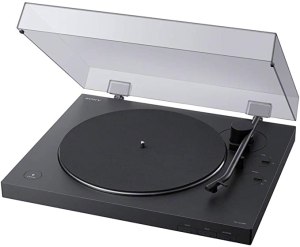 1 BY ONE makes a great affordable turntable that has a built-in speaker. This option features an adjustable counterweight to change the tracking force, a feature typically found on more expensive turntables. It also has an Audio Technica cartridge, so you know your records are in good hands when you put the stylus down. You can play music to the turntable using Bluetooth, or connect to an external set of speakers using RCA cables. 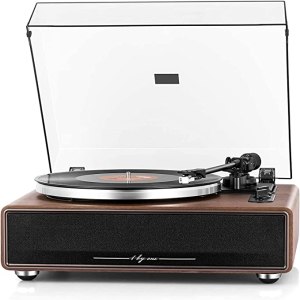 1 BY ONE Turntable and Speakers

The U-Turn Audio Orbit has one of the most striking designs in a not-too-expensive package. The Orbit basic is available from $200, though at that price it doesn’t come with a built-in preamp. The Orbit Plus has a built-in preamp for easy setup, and it uses a Ortofon OM5E cartridge. Plus, the external belt drive adds to the striking look of the turntable, while reducing motor noise. It can play records at 33/45 RPM using the manual adjuster. 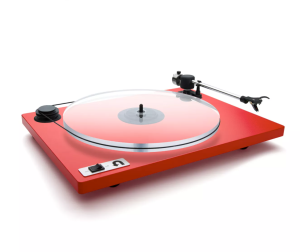 If you want your record player setup to be free of a tangle of wires, Audio-Technica’s LP60X-BT can connect to your stereo system or speakers through Bluetooth, allowing for greater versatility in choosing how you want to listen to music. It’s an upgraded version of the LP60X, which does not have Bluetooth capabilities. The turntable has a unique rose gold finish. 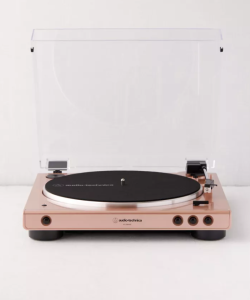 6. 1 BY ONE Belt Drive Turntable

This turntable from 1 BY ONE has a surprising amount of features for its modest price. It has a stylish, retro-tinged look and premium details like an Audio-Technica cartridge and an adjustable counterweight for improved audio and less distortion. The built-in phono preamp makes it easy to connect directly to speakers or a stereo system. Plus, you can use the USB port to rip your albums to your computer. 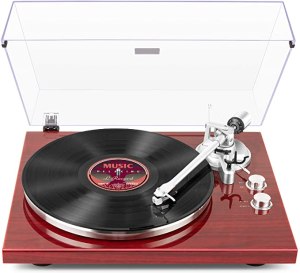 Crosley turntables aren’t known for having the highest quality audio, but they are an incredibly affordable option for a starter record player. The Voyager has built-in speakers, but the RCA outputs let you connect to an external speaker for an improved listening experience. It also has a Bluetooth input if you want to use the record player as a speaker. 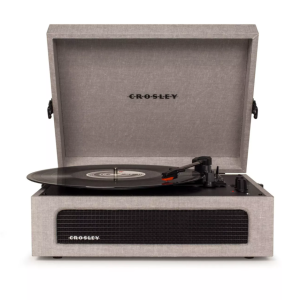 Turntable Speakers to Make the Most of Your Vinyl Collection