Whether you want a camera that can keep up with your adventurous lifestyle or one that will commemorate life’s biggest moments from a point-of-view angle, we love using GoPro cameras for both video and photos.

GoPros have a long list of, well, pros, which could be where they got their name. The company makes cameras in a variety of price points and with varying features, but something they all have in common is their small size. Designed to be handheld or mounted on anything from a helmet to a snowboard to a selfie stick, GoPros are ideal for anyone who is concerned about weight, whether you don’t want to weigh down your suitcase with a bulky camera or change the balance of your snowboard.

GoPros are also known for the durability, with the small cameras able to withstand tough climates. The HERO5 and Sessions, which we’ve featured below, are both waterproof, making them even more adaptable to various settings. Get amazing underwater footage of your family snorkeling trip or don’t sweat it if your water bottle spills in your backpack.

We also love GoPros because they produce high-quality videos and photos without sacrificing one or the other. Both HERO models we’ve listed below film HD 4K quality video, with the teeny tiny Sessions still able to capture professional-quality footage in 1080P.

GoPro offers ways to easily upload and edit your video and photos onto your phone or computer instantly by using the GoPro app. Working with WiFi and Bluetooth technology, the app also turns your phone into a remote control, allowing you to easily control your camera, editing and sharing videos and photos through email or on social media with the click of a button. With the Protune app, users can change the ISO Limit, adjust White Balance, control Sharpness and Exposure and more, all with the end goal of producing professional-quality content.

If you’re ready to capture your next adventure, we’ve got the GoPro that will help you do it.

The GoPro HERO8 has all of the bells and whistles you want, and some you didn’t even know you needed. It comes equipped with features like three different levels of stabilization, expandable mods for vloggers and the like, live streaming in 1080p, TimeWarp 2.0 time lapse videos, LiveBurst photos and SuperPhoto +HDR still image capture. You can take spectacular photos and video no matter where you are or how fast you’re moving, and share them almost immediately with your loved ones.

Pros: Most technologically advanced features of any GoPro thus far, streamlined design that’s easier to fit in your pocket, lens that twice as impact-resistant.

Cons: The battery door is easy to maneuver but a bit flimsy, could get lost if changing batteries in intense climate. 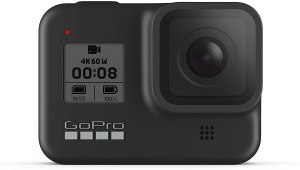 The GoPro HERO7 camera is a great travel and adventure companion for capturing your most precious moments right there in the action. It’s got 4K30 video and time lapse recording capabilities so you can turn whole events into short, shareable clips easily. It has a rugged and waterproof design and you can easily navigate between capturing modes on the intuitive touchscreen. Stay in the moment and use your voice to order your camera to start recording, take a picture or stop recording.

Cons: Doesn’t have the still camera capturing modes that the HERO8 has including LiveBurst and SuperPhoto. 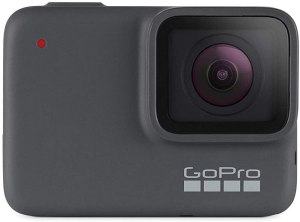 This GoPro HERO6 design features twice the performance of the HERO5 model including 4K60 and 1080p240 video. It has advanced video stabilization and captures smooth footage in your hand and mounted. It’s also waterproof up to 33ft without housing, and the touch and zoom playback features make it super easy to preview your own footage.

Cons: Does not have voice control features of the HERO7 model. 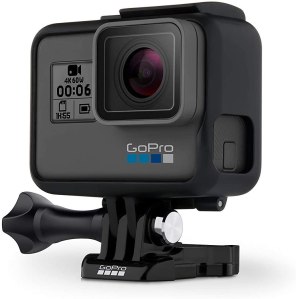 Waterproof, compact and able to shoot stunning 1080P video, the GoPro HERO Session is perfect for anyone who wants a tiny camera that can capture big action.

Pros: Easily download your videos and images straight to your phone thanks to the Session’s WiFi and Bluetooth connectivity. Shoot time-lapse and burst images, film professional quality videos with 100 frames per second, mount the Sessions to just about anything, and control video and photo recording with the simple push of a button.

Cons: The Session doesn’t have a screen that allows for in-camera editing. It also doesn’t have the same level of stabilization and the HERO4 and HERO5 or voice activation. 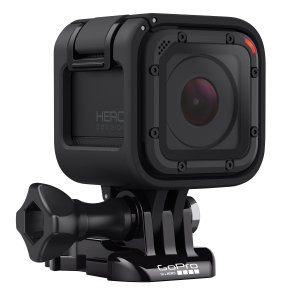 Pros: An upgraded version of the GoPro HERO4, the HERO5 has voice control, video stabilization, a 2-inch display screen that allows you to preview and trim videos, the QuikStories function, which uploads content to your phone and edits it, and 12MP photos that can be shot in single, burst and time-lapse form.

Cons: The HERO5 is the most expensive GoPro on our list. Some customers also found that the footage can look grainy in low lighting. 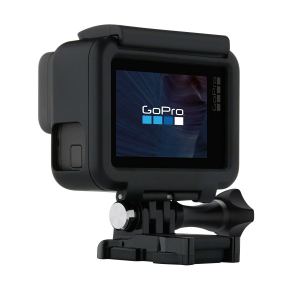 Featuring best in class image quality and shooting in HD 4K for professional quality videos, the GoPro HERO4 has a processor that is two times more powerful than its predecessors.

Pros: The GoPro HERO4 lacks some of the features of the HERO5, but that means a smaller price and physical size. The HERO4 isn’t waterproof, but can be made waterproof with a case, although it does add bulk and will be bigger than the HERO5. The HERO4 shoots in 1080p video or 720p for slow motion playback. With built-in WiFi and Bluetooth, the HERO4 can directly download to your smartphone or computer. Using Protune with SuperView, the HERO4 captures cinema-quality videos even at night thanks to Night Photo and Night Lapse settings.

Cons: Unlike the HERO5, the HERO4 doesn’t have a 2-inch display that allows for previewing videos. 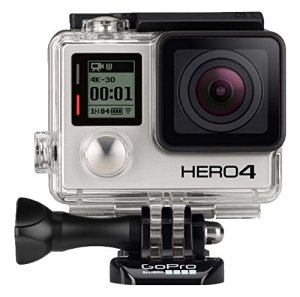