While the best TVs are available in a number of shapes and sizes, sometimes the exact screen dimensions you’re looking for are either too expensive to sensibly purchase, or just aren’t quite big enough for your needs.

Or perhaps you’re looking for a way to entertain your next 4th of July gathering and don’t want the hassle of lugging a TV outdoors (especially if it starts raining). This is where a home theater projector becomes a much better investment.

Modern projectors are outfitted with pretty much everything you need to get your favorite movies and shows up on the screen in seconds flat, but there are a few things you should know before laying down the dough for one of these cinematic machines.

What To Look for in a Home Theater Projector

Just as you would with a TV, these are the specs you should consider when picking a projector:

Resolution – In theory, a 4K projector will look better than a 1080p projector, but don’t be scared of choosing the latter, especially with a short-throw projector. Most people won’t be in a pitch-black room where picture quality becomes more noticeable. Plus, you can save a few hundred dollars going with a 1080p model. And there still isn’t an abundance of 4K content available. Sure, you’re future-proofing with a 4K projector, but you can save a lot of money going with the other option.

Brightness – When it comes to a projector, the brightness (measured in lumens) can be a difference-maker, especially if you are in a room that doesn’t get completely dark. Look for anything above 1,500 lumens, although many projectors are 2,000 lumens or brighter.

Connectivity – Every projector below will have the ports to connect a streaming device or gaming console. But a few set themselves apart with WiFi or an onboard streaming interface so you can stream your favorite shows from streaming services like Netflix without any connected devices.

What Else Do I Need for a Home Theater Projector?

At the very minimum, you need wall space. You need a wall clear of pictures or art that is a bright enough color (preferably white) to have a picture cast onto it. If you are going to go with a short-throw option, you won’t need much space between the projector and the wall. But for long-throw options, you’ll want to make sure you have a clear path from the projector to the wall.

A clear wall will work, but a projector screen will provide you with a better viewing experience and enhanced picture quality. Beyond picture quality, you’ll also want to invest in a home theater speaker system or sound bar to get sound quality worthy of home cinema. Sure, some of the home theater projectors have speakers, but just like a new TV, the speakers aren’t great.

If you’re ready to bring the theater experience to your home, or you just don’t ever see yourself going back to a movie theater for one reason or another, then a home theater projector is a great investment. Time to enjoy movies on the big screen in your home with your choice of not-overpriced popcorn and your favorite beer.

Here are our choices for the best home theater projectors available:

The Epson Home Cinema 5050UB is a powerhouse of a home theater projector. Topping out at 2,600 lumens, this 4K cinema projector features Epson’s awesome three-chip technology, which delivers jaw-dropping colors by exposing every part of the RGB spectrum for every frame. The results: Amazing color volume with abundant image detailing.

In terms of overall lamp life, you can expect up to 5,000 operating hours when using Eco mode and about 3,500 hours using some of the 5050UB’s brighter picture presets.

And this is further buttressed by the 5050UB’s full 10-bit HDR support. Simply put, HDR content has never looked and felt so arresting. In terms of installation, the 5050UB also features keystone correction, vertical and horizontal lens shifting, and a 2.1 motorized zoom for dialing in the perfect image. You’ll also find two HDMI 2.0 inputs, as well as a number of legacy inputs for older A/V components.

We got our hands on the ultra-portable Nebula Cosmos Laser 4K Projector, and let’s just say we were beyond amazed by its performance. Designed for quick plug-and-play applications, once you fire up the Cosmos, Anker’s Intelligent Environment Adaptation kicks in, conforming the projected picture to fit the wall or screen you’re shooting onto.

Delivering 2,400 lumens, the Cosmos’ laser lighting makes for a clean and sharp-looking picture with great color volume and powerful image upscaling. Conveniently, the Cosmos also comes with an Android TV dongle, granting you access to a number of today’s leading streaming apps, including Netflix, Disney+ and YouTube.

With a maximum throw ratio of 150 inches, HDR support, as well as HDMI, US, and Bluetooth connectivity options, the Nebula Cosmos Laser 4K may be a bit on the expensive side, but it’s one of the most feature-rich and best-looking projectors out there. 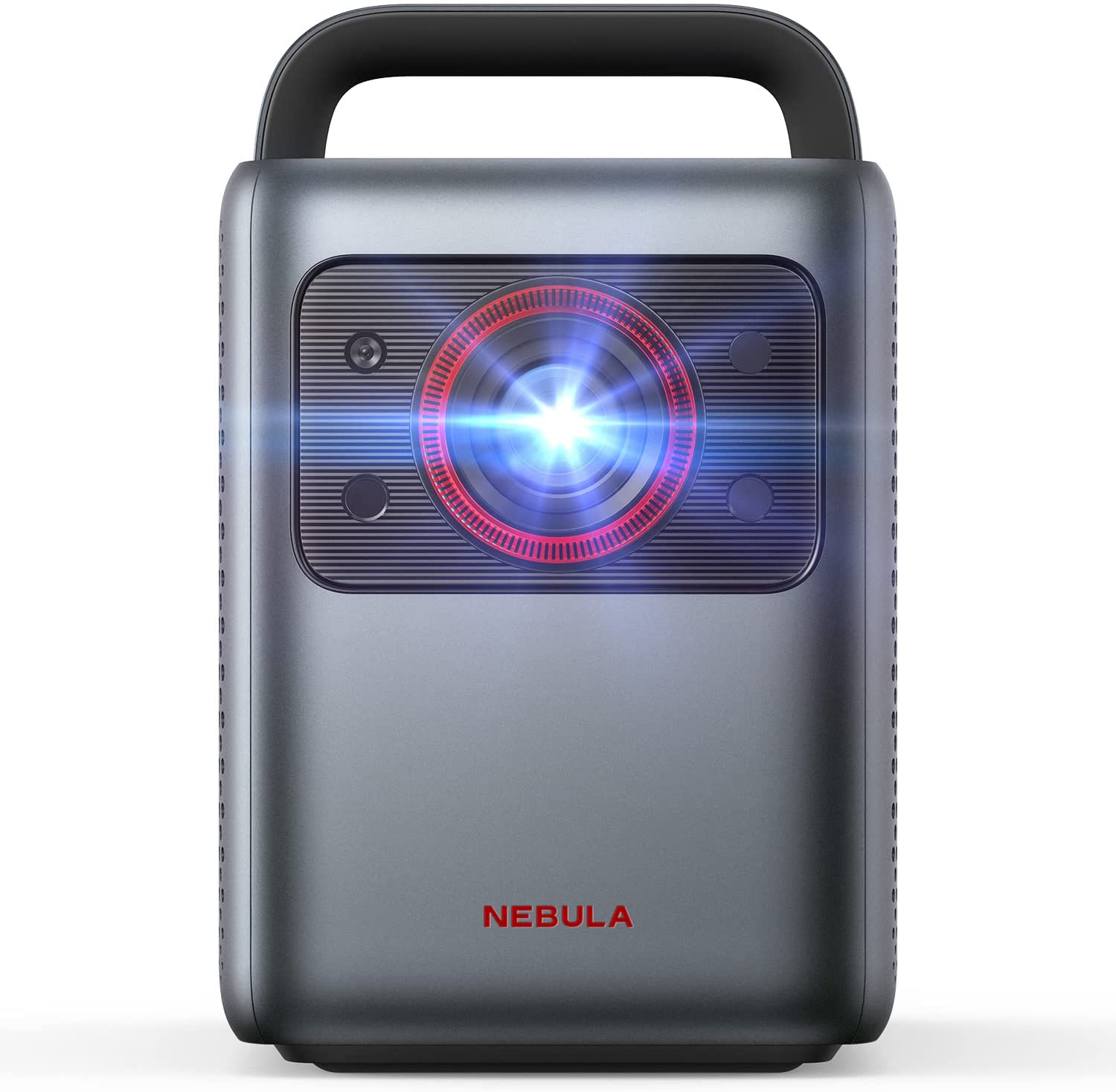 Not all projectors can sport the type of low lag and smoothness to satisfy gamers, but with a 240Hz refresh at 1080p, the Optoma is more than capable. The picture gets extra bright too, with 3,600 lumens of brightness. Combine that with 4K resolution and HDR compatibility, this is more than just a projector for gamers, it’s a strong choice for your home theater. 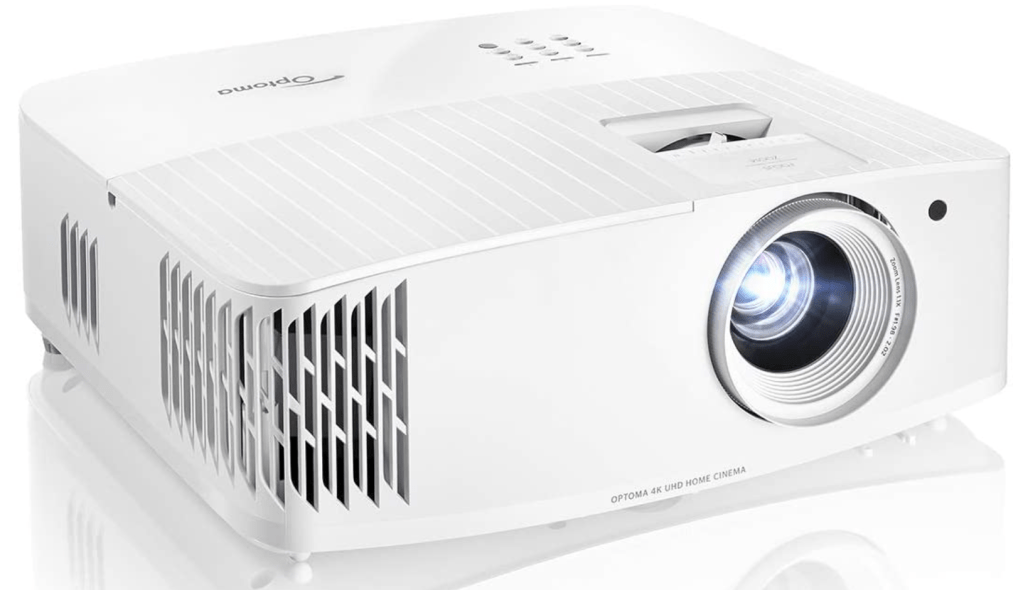 If you’re all about streaming apps and voice assistants, look no further than the LG HU70LA CineBeam. Utilizing LG ThinQ AI, the CineBeam is compatible with both Alexa and Google Assistant, allowing you to fire off voice commands to launch your favorite apps and control the smart home devices on your home’s network.

In terms of movies and TV shows, LG employs its phenomenal WebOS streaming platform (made popular by LG TVs) but compresses things down for a projector-friendly version of the OS called WebOS lite. Using the included Magic Remote (and certain voice commands), users can launch popular apps like Netflix, Amazon Prime, and more.

In terms of picture capabilities, the CineBeam can throw up a 140-inch image at a maximum resolution of 4K. Color volume is rounded out by the projector’s onboard HDR10 support, and although the CineBeam only outputs up to 1,500 lumens (not ideal for brighter rooms), it’s bright enough to combat most ambient light sources.

There’s a lot to be stoked about with The Premier. For starters, its bright 2,800 lumens casts a strong and vibrant picture using three-color laser technology for crisp picture detail. There’s also interface familiarity with Samsung’s smart TV platform on board, so you’ll be able to stream your favorite shows and movies. Included is a decent set of 40W speakers onboard to top things off. If you can stomach the uber-expensive price, this is one of the most impressive home theater projectors around.

There really isn’t one projector brand that is particularly renowned for audio capabilities, but the XGIMI Horizon Pro 4K manages to pack some impressive sound tech into an excellent 4K cinema experience. Thanks to the inclusion of two eight-watt Harman Kardon speakers, and Dolby and DTS decoding, the XGIMI delivers much bigger soundstaging than the average option.

And that’s on top of 2,200 lumens, HDR10 support and an excellent Android TV streaming platform. Oh, and let’s not forget to mention the fact that the XGIMI can throw up an image as small as 30 inches and as large as 300 inches! 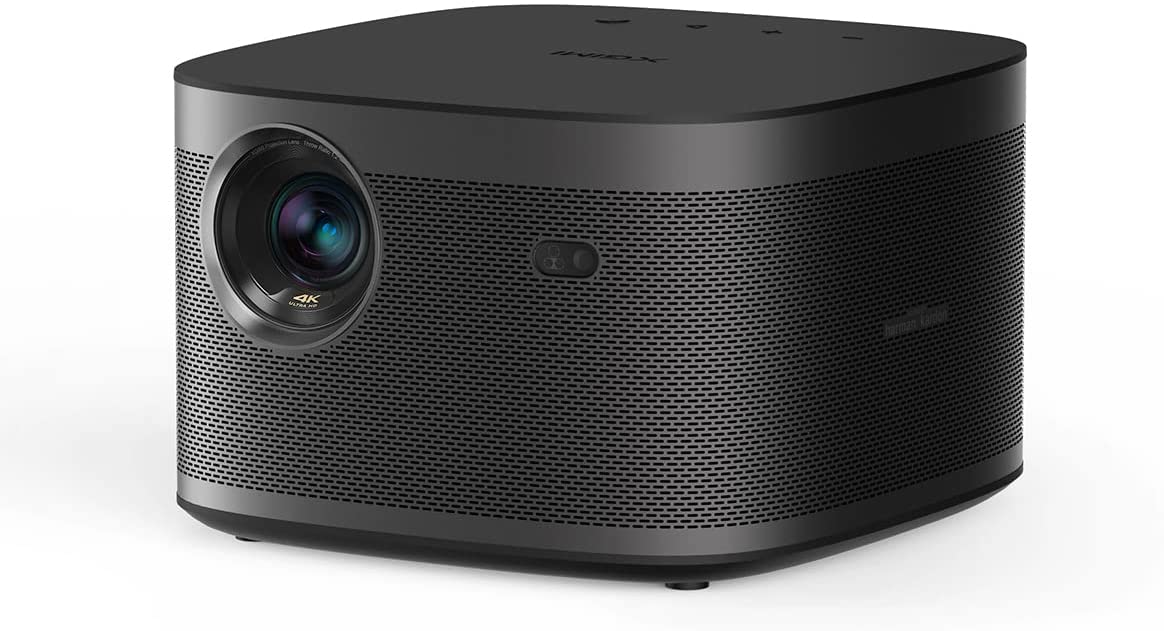 BEST PROJECTOR ON A BUDGET

Home theater projectors are not cheap (for the most part). Whether the brand wants to focus on lighting, resolution, optimized throw distance or some other medley of features, packing all of this into one projector often means prices of $1,000 or more. But are there any good home theater projectors for less than a grand? Absolutely, and our favorite of the bunch is the BenQ HT2050A.

Part of the company’s CineHome lineup of projectors, the HT2050A features 96% of the Rec.709 color space, meaning crisp and rich visuals for you and yours. Technically, this is also a short-throw projector that can output a 100-inch image from only eight feet away, although most calling-card specs for short-throw models tout throw distances of five feet or less.

And while this is only a 1080p HD projector, the BenQ HT2050A is only $749, which is a huge steal in the world of home theater projectors. 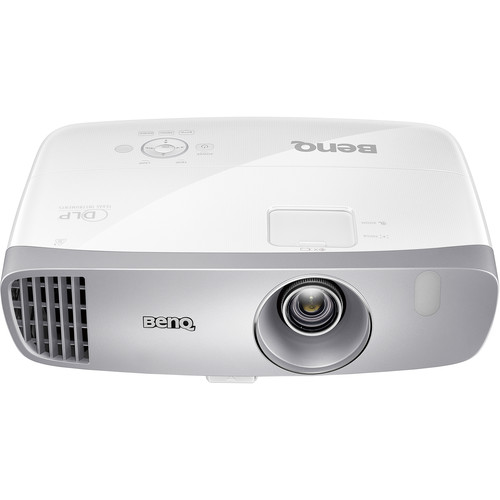 The Best Projector Screens For Your Next Movie Night