Hidden indoor cameras are a great way to keep an eye on your most prized possessions without making your house look like the inside of a convenience store. Using small and discreet cameras that are activated by motion sensors and offer live streaming, hidden indoor spy cameras are a great way to see the inside of your home or business when you’re away for an extended period of time, giving you peace of mind that your place is safe from intruders and natural disasters.

Hidden spy cams are must-have for anyone looking to keep their loved ones safe, whether they are on two legs or four. If you want to keep an eye on your beloved pets while you are away from the house, hidden spy cameras are a great option. Dogs and cats may spot the camera and think it’s a new toy you’ve left for them to play with. Cats are especially agile, which means they view your expensive new security camera as a challenge, regardless of how high a shelf you place it on. Using a hidden security camera means that you can keep an eye on beloved pets without them knocking the camera over, biting the camera, or worse, swallowing it. You want to keep an eye on your pets, but not from the inside out.

Add Comment
1 Person Commenting
Fernando
2 years
That's the coolest thing to catch the person who's stealing from you....

As for watching over your human babies, new parents quickly learned that as their children begin crawling and standing, one of the first things they do in their crib is attack their baby monitor. Traditional baby monitors have a holder that allows them to rest on the side of the crib, which is great for about the first eight months. After that, your baby views your expensive baby monitors as a fun toy to be swatted at between naps. Using a hidden camera that can be placed high in the room gives parents an eagle eye view of the nursery, which means you can keep an eye on baby during naps and while they are safely playing in their room.

We’ve put together three great options for anyone looking to discreetly add more security to their home.

Hidden in plain view, the RAZTU Hidden Camera Alarm Clock looks and works like a regular alarm clock, but has a hidden HD camera inside that features night vision, real-time video recording, a motion sensor and a 140 degree wide angle that can capture the view of an entire room. Our team loves that the alarm clock easily blends into a room and that remote monitoring is available using a smartphone, tablet or computer. When the camera is turned on, alerts are sent to your phone once motion is detected and the camera will begin recording video. Customers note that while the camera works well, the set up instructions are difficult to follow and that the alarm clock does not record audio. 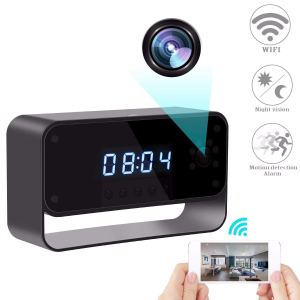 With a professional lens and rechargeable battery, one of the world’s smallest hidden cameras is the Closeye Hidden Camera Mini Spy Camera. The camera has a big following thanks to its powerful 2.0MP image sensor that can capture 1920 x 1080P HD quality live stream directly to your phone. Recording can be set for specific times of the day, like when your children arrive home from school, or will begin when motion is detected, with an alert sent immediately to your phone. An SD card can be added to record video, with the mini spy camera able to cover a 150 degree angle. Customers like that the camera is magnetic and can attach to any metal surface, but note that it needs to remain plugged in to allow for 24/7 live streaming, which can be difficult if you’re trying to hide the camera and don’t want to place it near an outlet. 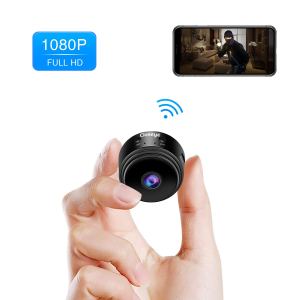 The smallest spy camera in the world (0.87in, 0.7oz cube) is the Hidver Hidden Spy Camera, which comes with a 1080P sensor and 4032×3024 pixels, giving you a clear and accurate video recording. Using motion detection technology, the camera will begin recording when motion is detected and follow the object’s trace, providing either snapshot images or video recording, depending on the setting. The footage is saved to an Micro SD card, which must be purchased separately, helping to bring down the cost of the camera and allow the customer to determine the storage size they want. Equipped with six LED lights for night vision, this is a great option for anyone who doesn’t need live streaming for their security camera. 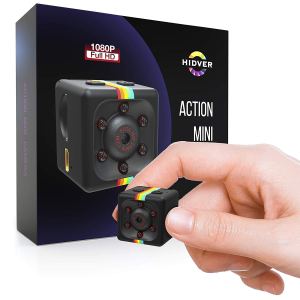