If you want to protect your home, then you’re going to need the right tools. Usually, when we think about security, we think about the outside of our homes and invest in outdoor security cameras and video doorbells. However, you don’t want to forget about the interior of your home, and the best indoor security cameras can provide complete coverage for total home security.

When shopping for indoor security cameras, there are tons of options from brands like Ring, Blink, Google Nest and SimpliSafe, but indoor cameras require more than just automatic motion detection to do their job properly. That’s because they need to respect the privacy of people, which becomes a dicey issue for some because cameras have the stigma of being invasive gadgets. No one wants to find an indoor security camera watching them inside an Airbnb, for instance.

We’ve tested out over 20+ indoor security cameras over the last year. During all of that testing, we’ve been able to get a good feel and understanding of what products are worth the investment, and which one’s are a waste of time and money. From intelligent cams that can distinguish pets from people, to uncovering what’s really there in the dark, we’ve rounded up our favorite indoor security cameras below.

The Best Indoor Security Cameras At a Glance

It’s one thing to read a laundry list of curated items, but it’s another when the chosen models have actually been tested in real-world situations. That’s exactly how we chose the best indoor security cameras for SPY readers. Alll of these cameras excel in many areas. Most importantly, however, we’ve found all of them to be reliable.

We made sure to select indoor security cameras with a wide range of features and price points, so no matter what type of camera you’re looking for — wireless, affordable, night vision cameras — you’ll find what you need below. Keep reading to see the top options from brands such as Ring, Blink, SimpliSafe, Wyze and more.

Who It’s For: Anyone that wants to protect their home, pets, possessions and loved ones.

When it matters most, no other camera has proven itself to be reliable, trustworthy, and exceptional in our testing than the Google Nest Cam (wired, indoor). That’s because it offers outstanding 1080p with HDR footage, intelligent detection courtesy of on-device machine learning, and it’ll continue to save clips even when there are internet outages.

Google also designed one of the most charming-looking indoor security cameras on our list, which is available in four different colors — including one with a maple wood base. It’s important to note some of the privacy features it offers, like automatic arming/disarming with geo fencing, so that you never have to worry about arming it yourself while rushing out the door.

Best of all, the Google Nest Cam (wired, indoor) comes with 3 hours of video event history for free, so you can watch them later on. That’s impressive because other cameras force users to subscribe to a service in order to receive video history. 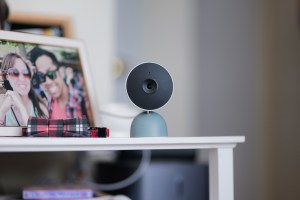 Who It’s For: Users that care about privacy as much as security.

Arlo’s foray into the indoor security camera space was big, one that left us mighty impressed given the company’s solid reputation in the outdoor space. The Arlo Essential Indoor Camera offers crisp night vision footage, advanced intelligent alerts (requires a subscription to Arlo Secure), a built-in siren, and a privacy shutter.

The latter’s especially important because it can be paired with the camera’s geo-fencing feature so that the camera’s lens is covered by a physical privacy shutter when you’re home — and then opened when you’re away. This lessens the feeling of big brother watching you. 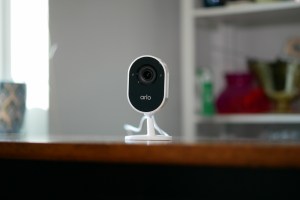 Who It’s For: Ring users that want to keep tabs on the interior of their home; people who want a super-reliable and long-lasting indoor camera with great video quality.

That’s because several new features came out since it was first released, such as color night vision to see colors in the dark and geo-fencing support. These two features complement its outstanding ability to capture crisp 1080p footage and reliable alerts that inform us about motion captured at home while we’re away.

So far, it’s been pretty reliable at capturing events since we’ve been using it. Plus, you can supplement it by adding other Ring smart home products for even more automation. 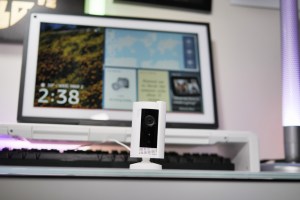 Who It’s For: Families that want to see the entirety of a room.

While there are many security cameras available for iOS users, there are actually quite a few that support HomeKit. If Siri’s your preferred voice assistant at home, then you’ll want to check out the Logitech Circle View.

The last thing you need to worry about when setting up a new security camera is making up yet another account to access your camera remotely. With the Logitech Circle View, you don’t have to worry about that or downloading another app because it can be accessed directly though Apple’s Home app.

Even better, you can ask Siri through a voice command to check out the live feed of the camera through an Apple TV 4K for even more convenience. 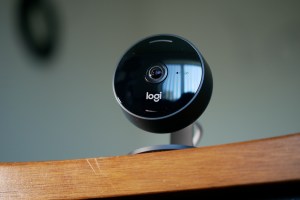 If your home is covered by Amazon products, like its line of smart speakers or smart displays, then you’ll want to take a look at the affordable Blink Mini.

It’s a simple indoor security camera that can be accessed either through the Alexa app on your mobile device or through an Amazon Echo Show smart display. We really enjoy the convenience of asking Alexa to show us the live stream of the Blink Mini, especially if we’re in another part of the house. 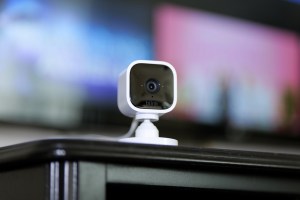 Who It’s For: Parents with newborn children or pet owners who want to keep an eye on their fur babies; anyone that wants an affordable, no-frills indoor security camera.

One of the best bang for the buck deals you’ll find on an indoor security camera is the Reolink E1 Zoom. Much like Eufy’s offering on our list, the Reolink E1 Zoom can also articulate around its base to offer full 360-degree coverage.

Its affordable starting cost makes it an attractive option from the get-go, especially when it’s accompanied by other features such as 3x optical zoom, night vision up to 40 feet, and local storage. We definitely can recommend it as an alternative for a baby monitor, just because of its ability to zoom, pan, and tilt. 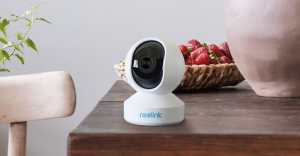 Who It’s For: Users who want to stay within the Google Assistant ecosystem; shoppers who want a cheap indoor security camera under $30.

Swann’s Indoor Camera may look generic at first glance, but don’t be fooled for one bit because it’s pretty adept at watching over your home.

First of all, you have support for Google Assistant to instantly see the live stream through a compatible Google Assistant-powered device. For example, you can access the camera directly through a smart TV running Android TV — as well through any TV with a Google Chromecast attached to it. We love this kind of convenience instead of having to constantly take out our phones to check.

Furthermore, the Swann Indoor Camera features True Detect Heat-Sensing, which helps to better detect motion from warm objects like people. That way, you’ll have fewer notifications to deal with 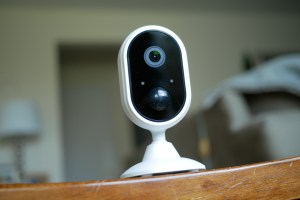 Black and white night vision footage is useful, but color night vision is even better. The Wyze Cam V3 may look small and compact, but don’t let it fool you because it’s incredibly rich with features.

Thanks to its color night vision, the Wyze Cam V3 offers more details than other cameras with traditional black and white night vision. With the help of just a little bit of ambient light, the camera’s sensor is able to draw out colors to give users more details about a scene — something that comes in handy when you’re trying to add more description about an event.

However, its usefulness as an indoor security camera doesn’t stop there because it also features local storage, 1080p video recording, and the option to continuously record. 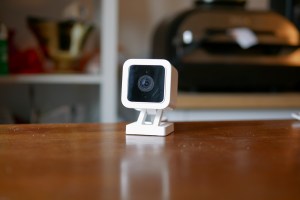 Who It’s For: Parents that want to make sure kids are doing homework.

One of the biggest limitations of indoor security cameras is their narrower field of view (in comparison to outdoor cameras). Well, you won’t have to worry about that with the Eufy Solo IndoorCam P24 because of its 360-degree coverage.

This camera is notable for offering pan and tilt options so that every part of a room is covered. When you access the live stream, you can use the controls through the app to move the camera towards any direction you want. Better yet, it’ll automatically track a subject when it’s armed and watching out for any movement. 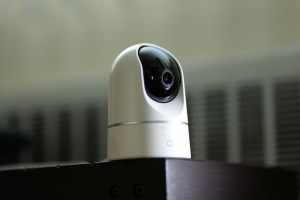 Who It’s For: SimpliSafe home security subscribers; homeowners that value their privacy.

SimpliSafe has one of the best DIY home security systems around, but it’s made better with the SimpliCam. That’s because it does a much better job at respecting your privacy at home.

It does that with a mechanical privacy shutter that will cover the camera’s lens when you’re home and the security system is disarmed. No one wants prying eyes, even when going about boring, everday activities. With the SimpliSafe SimpliCam, you’ll hear a distinctive audible tone of the actuator whenever the camera is accessed by someone.

In emergency situations, video verification will allow the monitoring center to access live footage from the camera to determine if there’s an actual burglary going on.

Field of View: 120-degrees
Video Resolution: 1080p
Coolest Feature: You can hear the distinctive sound of its privacy shutter

Read More: How Does SimpliSafe Compare to Ring Alarm? 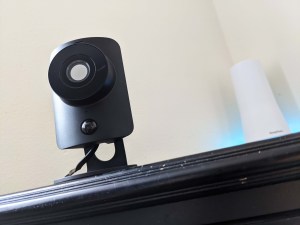 How We Tested The Top Indoor Security Cameras

Cameras are supposed to offer peace of mind and security, but others do a better, smarter job of it. Even though all modern indoor security cameras are triggered by motion, it takes much more to make our list. We curated our selection based on a variety of criteria, but just remember that what matters most is that your camera works when you need it. What’s the point of a security camera when it sends redundant notifications or fails to capture important events? No one has time for that.

Click here to read more about how we test and review products. 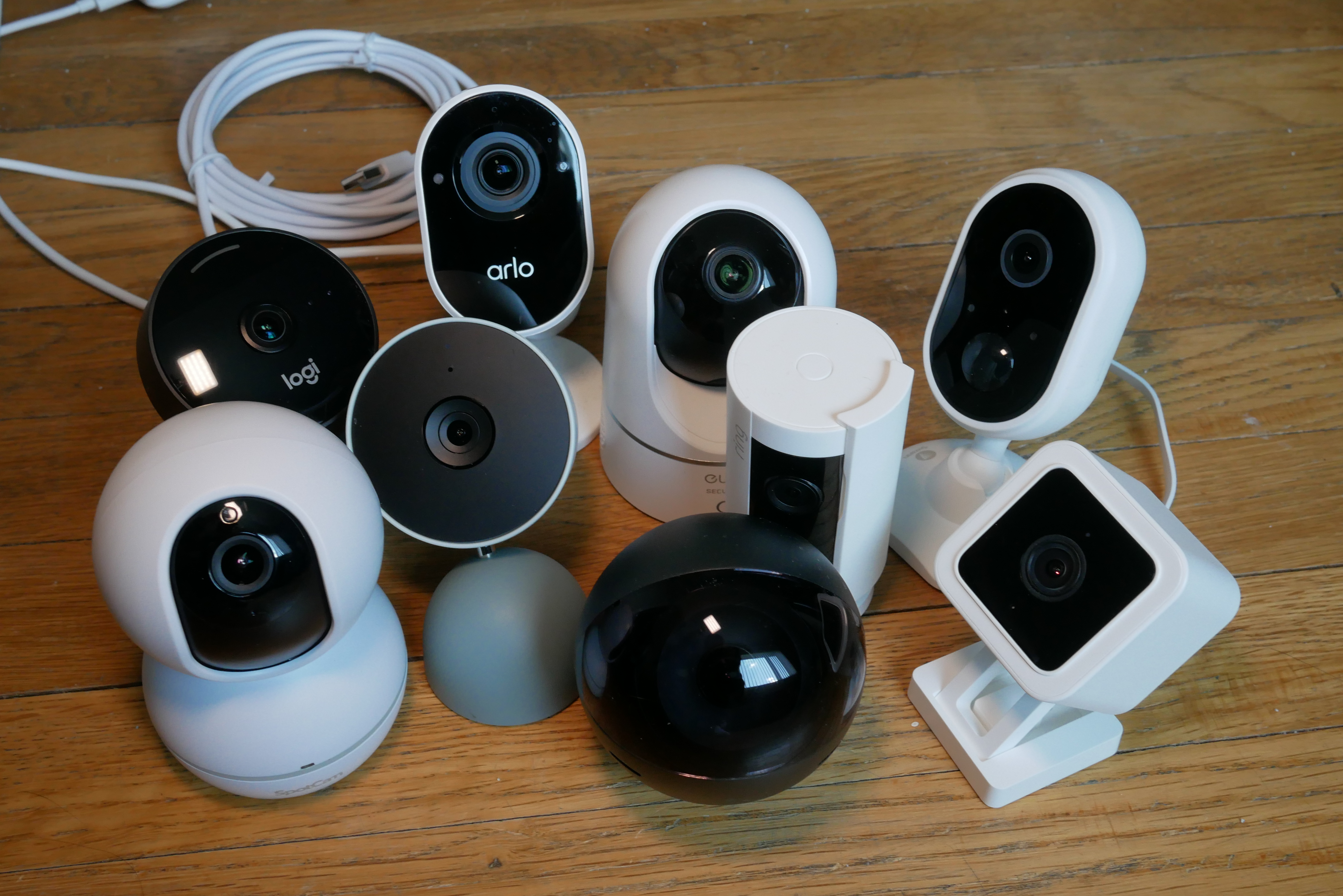 A selection of the best indoor security cameras tested for this review. John Velasco | SPY

A screenshot of the video captured by the Google Nest Cam during our test. John Velasco | SPY

About The Author: John Velasco

John Velasco is the Tech Editor at SPY.com, and he has tested and reviewed hundreds of smart home products over the past decade. For SPY.com, he’s reviewed home security systems such as the new Ring Alarm Pro, the best home security cameras, flagship smartphones, and Amazon’s first smart TV. Before joining SPY.com in 2021, John worked as the smart home editor at Digital Trends. Previously, he worked for Android Authority covering Android-related news as the editor-at-large, and at PhoneArena as the senior editor. John has been covering mobile and smart home tech for over a decade, and he is also passionate about virtual reality, drones and electric bikes.