Hear the words “spy camera,” and it’s likely your brain goes to a James Bond or Ethan Hunt stealing secrets or capturing footage of a potentially world-changing event. Most people wouldn’t believe a spy camera is something an average citizen could possess. However, we’re here to show you that the best spy cameras are actually far more versatile and accessible, both financially and functionally, than you ever may have imagined.

The first question that comes to mind is probably, “Why would I need a spy camera?” And while in our modern world, there are plenty of rather nefarious folk using them for less-than-legal means, here are some examples of the most common and handy uses for a personal spy camera:

When it comes to choosing the best spy camera for you, it’s worth considering a number of factors. Firstly, the quality of recording you desire (1080p or 4K). Secondly, what recording mode do you like? Choices include motion detection and live feed. Lastly, think about what shape and style is best suited to your needs. Common hidden object options include:

Below you’ll find 11 of our favorite spy cam options. Each well-reviewed model offers a range of functions and can be put to use in numerous situations. Read on to find the right one for you.

It may have become a little bit of a cliche when it comes to spy camera choices, but that doesn’t stop the pen from being our top choice. In this SIRGAWAIN Hidden Spy Camera Pen, you’ll have a versatile way to record videos and pictures in HD quality, no matter whether you’re at home, at the office or even on the go. Its compact size and genuine working pen design makes it easy to carry, easy to hide and highly unlikely to draw any attention during use. Furthermore, it comes with a one-year guarantee as well as a handy storage box, several pen refills and a USB card reader. 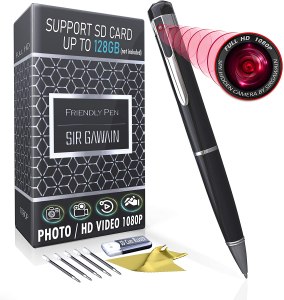 At under $30 and with over 50,000 five-star reviews, the Wyze Cam is hard to beat in terms of value and features. This compact home or office cam offers two-way, full HD live streaming or recording offering a real-time or security function. For the security minded, you can set the camera up to record 12-second video clips when motion or sound is detected. The device can also save this remotely to the cloud, preventing the card from filling up. Additionally, the nighttime-capable camera can also send mobile push notifications when activated and be controlled using Alexa or Google Assistant. 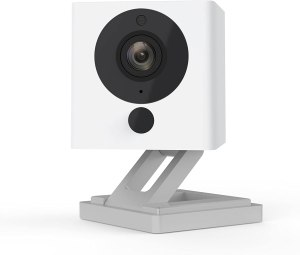 MOST HIDDEN IN PLAIN SIGHT

If you need a camera which can sit right in front of people without raising suspicion, the DIVINEEAGLE Spy Camera USB Charger could be the choice for you. This compact device looks just like any normal socket-to-USB charger, and only on truly close inspection, would you reveal its hidden secret – a built-in 1080p camera. When recording, the camera shows no visible indicators and uses loop recording to overwrite old data should it be required. For effective target identification, the camera also boasts IQ motion detection with 130 points. 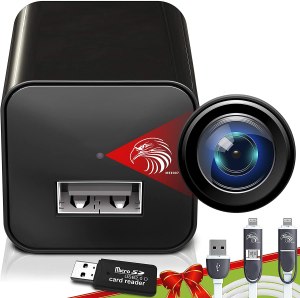 With its sharp HD 1080p camera, Wi-Fi capabilities and magnetic backing, the VIONMIO Mini Spy Camera is a versatile, easily mounted and super-small way to keep watch at home or the office. The compact device offers motion detection as well as night vision and is compatible with micro SD cards for easy in-camera storage. The built-in battery also offers over 90 minutes of recording per full charge and records with a wide-reaching, 140-degree view. 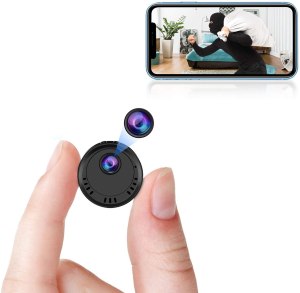 The Facamword Module Wireless Hidden Camera offers a flexibility and versatility when it comes to mounting which few options can compete with. This slimline, motion-only camera is made up of a tether-mounted camera, a central control box and a Wi-Fi antenna, meaning it takes up minimal space and allows you to hide it in, on, under or even inside everyday household items. Additionally, this is one of the options on our list which can easily be worn should you wish. 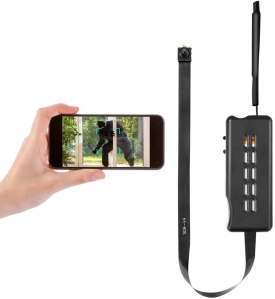 The Puoneto Mini Spy Camera is another truly compact spy camera option which can fit in and around almost any space you want it to. The cube-shaped device delivers 4K recording at a 150-degree recording angle and offers either in-camera, Micro SD or Wi-Fi-enabled storage. Furthermore, you’ll also get night vision capabilities and motion detection which can be linked to accompanying alarms, so you’re always in the know. 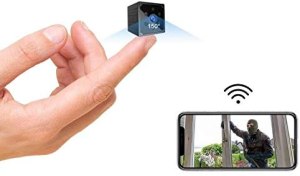 While also delivering high-quality sounds, the AMZCEV Hidden Camera Bluetooth Speaker is a fun way to record what’s going on. Whether it’s your kids dancing, a party with friends or just for use as a hidden surveillance device, you’ll enjoy 1080p quality recordings from the spy camera. The camera can also work as a Bluetooth-enabled wireless speaker. It plugs into an AC/DC power source and offers both motion and continuous recording modes as well as app alerts and live streaming. 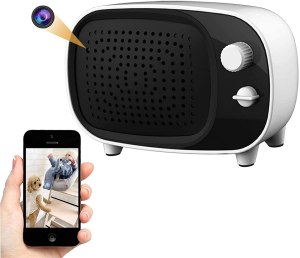 Another classic, the old camera in your sunglasses provides an easy way to record exactly what you’re seeing, giving you the back up which you so often wish you had. Whether it’s an extreme sport, meeting with friends or an office-based argument, the stylish sunglasses sport a full-HD, bridge-mounted camera which records your video onto the 32GB micro-SD card included in the set. In-arm power buttons let you seamlessly switch the camera on and off, while the UV-400 lenses protect your eyes, just like any normal pair should. 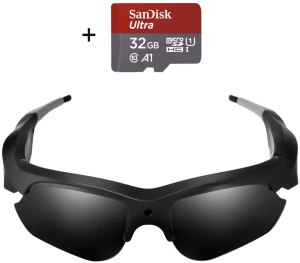 With its sleek, modern look, the VIC-ZONE Hidden Camera Clock is another dual-purpose device which lets you keep an eye on everything going on while staying aware of the current time and enjoying your own music, too. The camera inside the clock is HD 1080p and capable of night vision, motion capture and Wi-Fi and Bluetooth connectivity. The last feature allows for the live video to be seen anywhere in the world. And, as an added bonus, this camera provides the ability to listen to your favorite music. 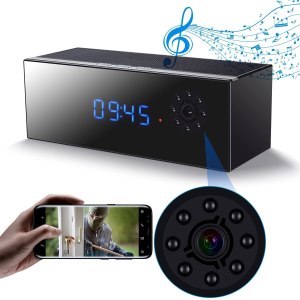 In addition to the high-quality, 1080p camera, the Forthaus Hidden Cam Spy Camera offers a range of handy features. These include fast-charging USB ports, a built-in radio and a Bluetooth speaker. The camera itself is capable of night vision and motion detection and comes with an accompanying app which allows for a live view via Wi-Fi. The device also includes 128GB of internal storage, ensuring you’ll have enough space for plenty of home footage. 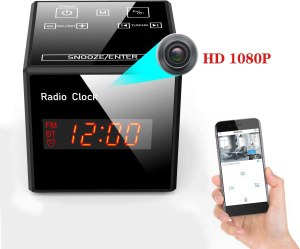 For an incognito, bird’s eye view of everything that goes on in any chosen room of your home, consider fitting this WNAT Hidden Camera Smoke Detector. As you may have guessed, this HD 1080p camera is mounted inside a functioning smoke detector, giving you a dual-purpose device for both home protection and security. Additionally, the battery-powered device connects using Wi-Fi and allows for live viewing as well as motion-activated, 125-degree recording of what’s going on, too. 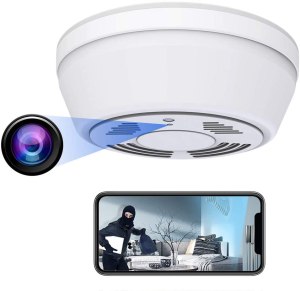