When it comes to home security, you can never feel too safe. Ensuring your property is well lit is a great way to have peace of mind, with outdoor lighting an inexpensive and aesthetically pleasing answer to home security. Sensor lights are always handy, acting as a warning that someone is approaching your property, ideal for those who live far away from neighbors. Having an alarm system complete with security cameras is one of the best ways to feel safe in your home, but these systems often come with a big price tag.

In a study done by an investigative news team in Idaho, 88 convicted burglars were interviewed in order to better understand how people can keep their homes safe. While many of those convicted of breaking and entering agreed that home security systems and visible security cameras acted as a deterrent, some revealed that the systems can signal that the home is full of valuable goods that are worth protecting and therefore stealing.

So, what’s the answer? Hidden security cameras. Often referred to as spy cameras, these discrete cameras can be placed around the outside of your home and provide 24/7 surveillance. Often triggered by motion sensors, the cameras send alerts to your mobile phone through an app, which will let you know if someone is outside the house. Many of the cameras take images once motion has been detected and some are equipped with memory cards that will begin recording video as soon as there is a disturbance.

Ideal for those who travel, the small and discrete cameras can often live stream straight to your phone, which is also great news if you’re tucked into bed at night and want to check whether the bang outside your window was a raccoon getting into the garbage, or an intruder trying to get into your home.

You can’t put a price on security, but you can put a size on it.

Equipped with dual 1080P lenses, full HD resolution, loop recording, and a built-in rechargeable battery that lasts up to two hours, the WSBESEV Mini Hidden Spy Camera is a tiny but powerful tool for home security. The Wi-Fi enabled camera can detect even the slightest motion, instantly taking three pictures and sending the images straight to an app on your phone, with live recording beginning at the same time. An SD card can be added to the camera to record video, or users can live stream the camera’s view from their phone anytime. Although the camera does have a built-in battery, plugging it into an outlet source will ensure the camera is working at all times. Additional cameras can be added and controlled on the same app, making it ideal for anyone looking to capture multiple camera angles around their property. The camera can be used indoors or outdoors, but keep in mind that it must be close enough to the house to receive a Wi-Fi signal in order to function. 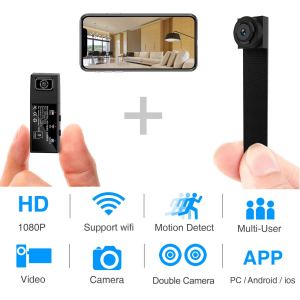 Hiding in plain sight is the Tupeya Light Bulb Camera, which looks light a regular lightbulb and acts as a hidden home security system. The discreet camera boasts a 1080P bright HD image and can capture images in the dark up to 32 feet away, perfect for installation on a front porch or back deck. An alert is sent to your device when motion is detected. The camera comes with a 32GB  micro SD card, which records video of movement. Customers love that the bulb, which can be livestreamed to your phone, is hidden in plain sight and features a talk back feature that lets the user interact with delivery drivers or to ward off intruders. 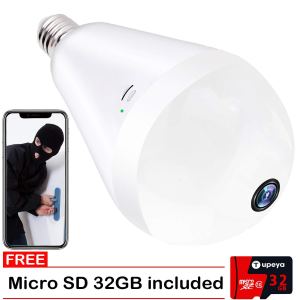 Small, powerful, and affordable, the JC Berry WiFi Spy Camera has a 150 degree wide viewing angle, making it an ideal option for anyone looking to monitor a large space. The camera is one of the smallest on the market, so it’s easy to hide outside or inside the home. One of the bonuses of this camera is that it can work without Wi-Fi, with the camera coming equipped with an SD card that will record up to 100 minutes of video footage. The blinking LED light, which indicates that the camera is on, can be turned off, making the tiny camera undetectable. Customers noted that the quality of the image is not as clear as higher priced competitors and that the audio function is good, but the camera does not allow for talk back. 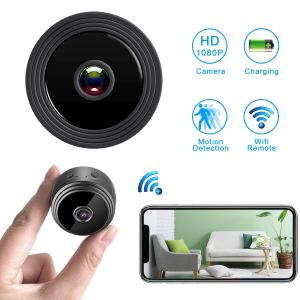