While plenty of new smart TVs have internet connectivity and smart apps built right in, you may not want to trade in your perfectly functional flat-screen TV just to get access to these features. Fortunately, the best streaming devices make it easy to access your preferred entertainment apps like Amazon Prime, Hulu, HBO Max, Netflix and Disney+.

The leaders in the market include Google with Chromecast, Apple with Apple TV, Amazon with Fire TV and Roku with its eponymous streaming devices. Each device offers its own benefits. Roku and Fire Stick are distinct in that they offer a user-friendly interface for your TV, and they come with a remote that can replace your TV’s remote. They basically allow you to turn a regular TV into a smart TV. However, these devices do not offer access to HBO Max, which is a major drawback if you were hoping to binge-watch Friends.

So what’s the best streaming device? That depends on your budget. If you don’t mind dropping $170 on a streaming device — on top of what you’ll pay for apps like Netflix and Hulu — then Apple TV is the way to go. If you’re looking for a cheap streaming device, then Roku has a few affordable options that easily unlock access to your favorite apps. Despite being a smaller brand, Roku can more than keep up with its competitors who are worth tens of billions of dollars (or even a trillion, in Amazon’s case). Roku is a popular option because it has an intuitive and uncluttered search menu, and it’s better optimized for 4K. However, if controlling your TV using a smart speaker is important to you, then Amazon’s Fire devices have a clear edge. And of course, if you’re already in the Apple ecosystem, having a streaming device that syncs will all of your other Apple devices makes life super convenient. There are also more niche alternatives like the NVIDIA Shield TV, which is a great option for gamers.

To help you get the most out of your TV, we’ve rounded up the 12 best streaming devices for sale in 2020.

Google’s Chromecast line of streamers has always offered the best bang for the buck, but the lack of a remote-driven interface always hurt its cause. Being able to load up videos with your phone is a great convenience to have, but as the sole method of control, it can feel a bit limiting. Chromecast with Google TV changes this in a major, major way. You can still cast videos from virtually any streaming service using your phone or laptop, but now there’s a remote and Google TV, which is essentially a redesigned and overhauled update to Android TV. This means you can install apps, receive curated recommendations, load up live TV via a seamless Youtube TV integration, and even give Google Assistant voice commands to control your smart home.

But when it comes to specs, the Chromecast with Google TV is also built to compete with the best streaming devices. You have access to 4K streaming in HDR10 or Dolby Vision, support for Dolby Atmos sound and the remote can be used to power your TV on and off, change the volume and switch input sources. On top of that, all of the services you could ever want are available on Google TV. This includes Netflix, Hulu, Disney+, Peacock, Criterion Channel, Twitch and HBO Max, which is still — somehow — only available on Google and Apple streaming devices. But the thing that really puts this little streamer on top is the fact that it’s offering these top-of-the-line features at a price well below the premium offerings from other companies. 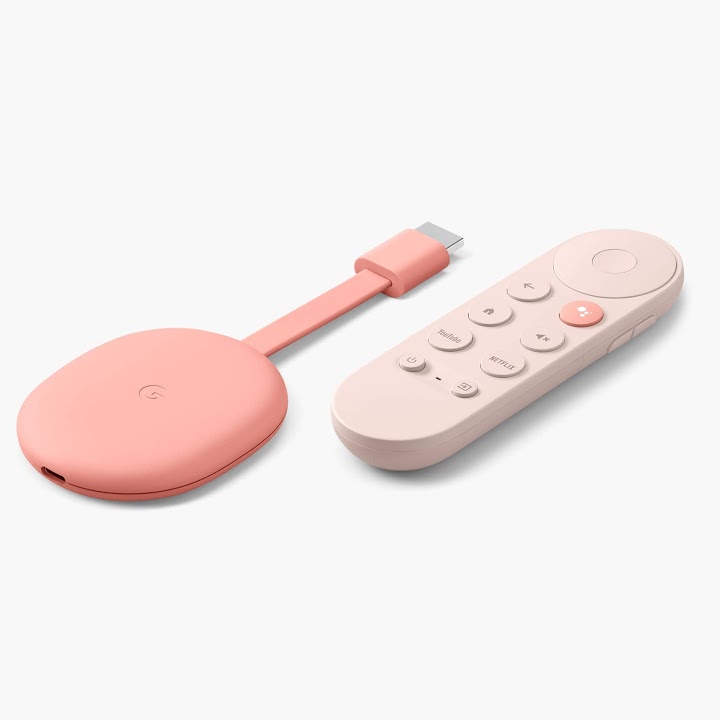 When you’re team Apple, and already heavily invested in the Apple ecosystem, the Apple TV 4K streaming device is your best bet. However, even if you generally prefer Android devices, Apple TV 4K is still a great pick among the best streaming devices. The A10X Fusion processor makes loading all of your favorite content a speedy endeavor. Speaking of saving time, you can copy passwords from your iPad, iPhone and other Apple devices to your Apple TV, so you don’t have to continuously type those in. Apple AirPlay also offers casting from your phone, while the Siri remote offers great voice control. And now that Apple TV 4K has Apple Arcade, you can turn your streaming device into a gaming console with a Bluetooth controller. If you’re a fan of Apple, you’ll love all the features the Apple TV 4K has to offer — although the minimalist remote takes some practice.

The major downside? The price. If you are looking for a more affordable streaming device, or if you don’t like Apple products, you’ll want to look at one of our other top picks for the best streaming devices. 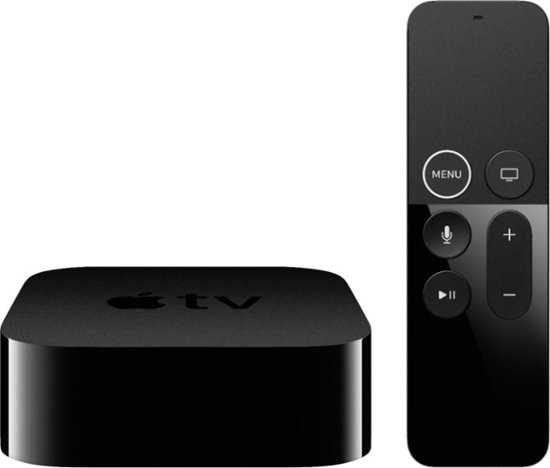 While it looks like a USB stick at first glance, the Roku Streaming Stick+ is a pretty robust streaming device. It starts with 4K HDR video, HDR10 support and Dolby Atmos sound. It also has strong WiFi support, so you can get a quality connection to your home WiFi without the use of an ethernet cable. As soon as you plug this streaming stick into the HDMI port on your TV, you’ll be welcomed by the always-easy-to-navigate Roku platform and plenty of app selection. Plus, the Roku voice search is on par with Siri and Alexa, even though it doesn’t get much hype. There are a few different Roku devices to choose from, but the Streaming Stick+ is the smallest, least conspicuous way to stream in your living room. 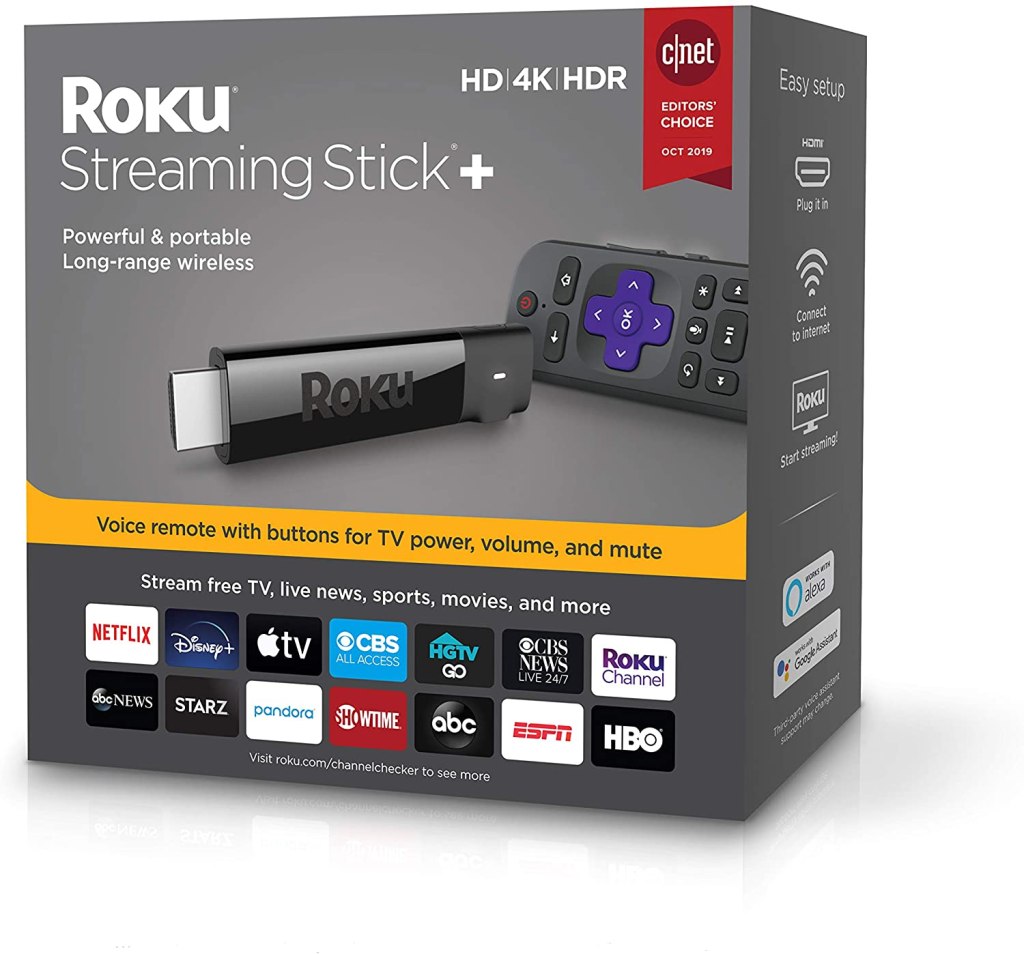 The Fire TV Stick 4K by Amazon is Amazon’s best all-around offering in the Fire family and offers a ton of streaming power in a small package. The Amazon Fire TV Stick boasts 4K streaming with HDR, Dolby Vision and Dolby Atmos support, a processor with enough power to deliver top image quality, WiFi support capabilities and a more complete 4K HD streaming experience. Also, finding content on Fire TV just got easier with the addition of voice control. Now you can ask Alexa to find, launch and control all of your favorite content. If you’re an Amazon Prime subscriber and do all of your shopping on Amazon already, then this is the best streaming device for you. 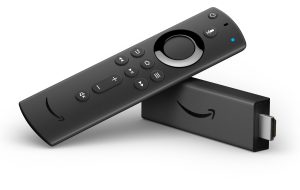 Although this streaming device kind of looks like a cable box provided by a TV company, it’s a lot easier to use than anything your cable company can provide. For starters, it offers 4K streaming, Dolby Atmos and HDR10 compatibility, so you can get the most out of your viewing experience. But it’s also the only Roku box to offer Dolby Vision support. And while the other Roku devices featured here can connect wirelessly, Roku Ultra can connect to your home’s Internet via an ethernet cable in addition to WiFi, which is useful for a lag-free 4K streaming experience. The remote also has two programmable shortcuts to get quick access to your favorite apps.

To sweeten the deal, if you lose your remote, you can press a button on the device that will make the remote beep to help you find it. Finally, Roku threw in a pair of JBL headphones that plug directly into your remote and put the sounds of those loud action films directly in your ears, which is perfect for night owls who don’t want to make too much noise. 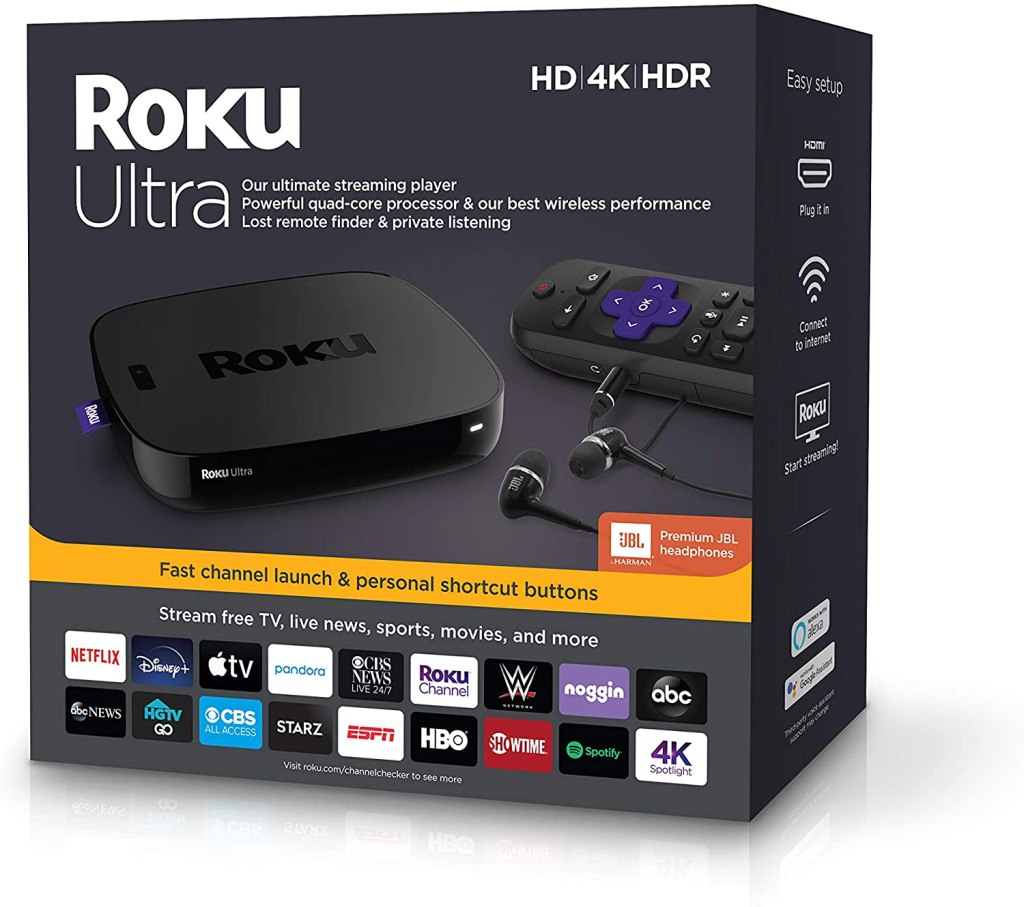 The Roku Premiere is very similar to the Roku Streaming Stick+ featured above, but without a few features (and all at a lower price). The latest streaming services like Apple TV and Disney+ are available as apps on this Roku’s interface, as are all of your other favorites (except for HBO Max). Roku excels at simplicity — the remote is easy to use, the device is easy to set up, and the interface is as intuitive as ever. Unlike the Roku Streaming Stick+, the Premiere comes with its own HDMI cable for connecting to your TV, but you lose out on a voice remote, but those are pretty much the only differences between these streaming devices. 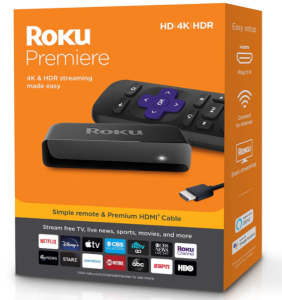 Google’s Chromecast started as an experiment, setting out to offer a cheap and easy way to stream content in your living room. That experiment was so successful that Chromecast quickly became Google’s top priority as far as its streaming products go. Unlike the Chromecast with Google TV, this doesn’t have a remote, so you absolutely need a device like your phone, tablet or laptop to stream content to your TV. After it’s set up, a casting icon will appear on your streaming apps. By clicking it, the streaming apps will cast to your TV as you control them using your smartphone or tablet. If you don’t mind casting, it’s actually a pretty nifty streaming device. Using your phone as a remote takes some getting used to, but this is an affordable solution if you have an older TV. 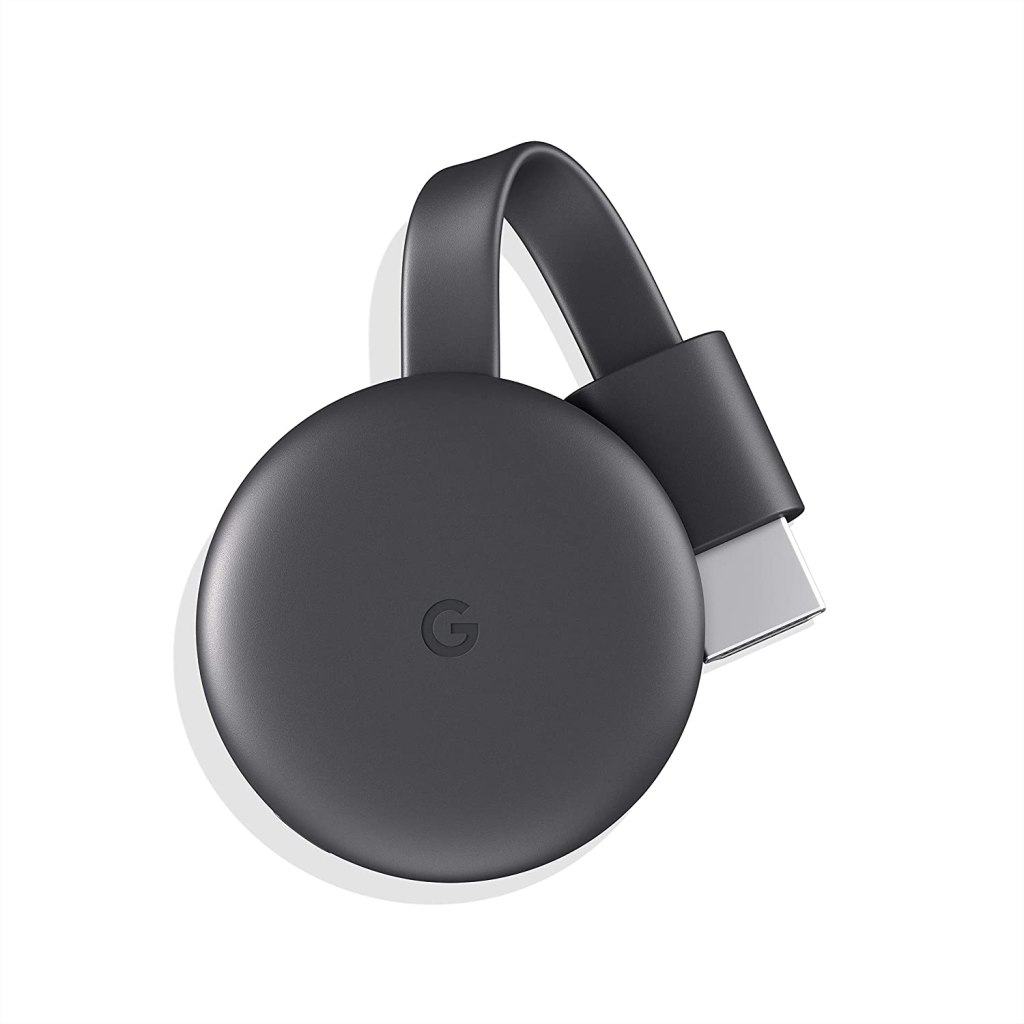 A streaming device with gamers in mind, the NVIDIA Shield not only has the ability to stream 4K content, but it also has over 200 games onboard via Android TV. And gamers will appreciate the fact that both Xbox and PlayStation 4 Bluetooth controllers are compatible with this streaming device. It even allows PC gamers to stream games to their TV in beautiful 4K. For casual streamers, all of the heavy-hitting apps are still available, and you can easily search for them thanks to Google Assistant. 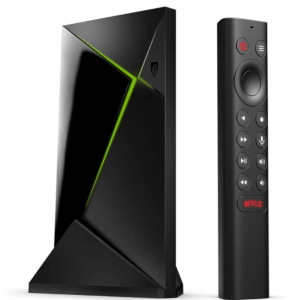 The Fire TV Cube is an upgrade on the basic Fire Stick, offering greater functionality and convenience. The Fire TV Cube offers 4K streaming and support for Dolby Vision. It functions as somewhat of a cross between an Echo smart speaker and a Fire streaming stick. Thanks to Alexa, you can use voice commands to find a specific program or channel on the TV. However, the Fire TV Cube goes beyond TV. You can use it to control other smart devices such as lights, and you can ask for weather updates or set reminders. If you’re looking for a streaming device that can also double as a smart home hub, this is the best option available today. 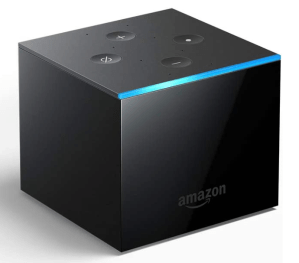 If you don’t have a 4K TV and you aren’t planning on getting one, then shelling out the extra cost for 4K compatibility isn’t worth it. This HD streaming device from Roku is economical and offers all of the best features of Roku’s streaming devices. It’s been upgraded with access to the best streaming services, including newer entrants like Apple TV and Disney+. 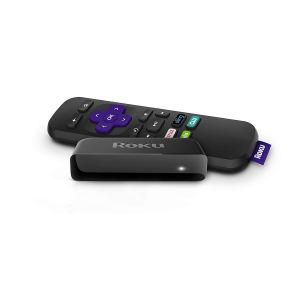 Voice commands, HD upscaling and a remote locator are only a handful of the amazing features that come standard with the NVIDIA TV Shield. While NVIDIA isn’t as well known as Fire TV or Roku when it comes to home streaming, even the best streaming devices can’t match this product in terms of picture and sound quality. The NVIDIA Shield can let you stream 4K HDR video and is compatible with your Dolby Atmos surround sound speakers. With this powerful streaming device, you’re a TV wizard, deftly flipping back and forth between streaming titans like Prime and Netflix. Customers can control Shield using voice commands via Google Home or Alexa. The NVIDIA is also a particularly great option for gamers and audiophiles, allowing you to stream PC games directly to your 4K TV. 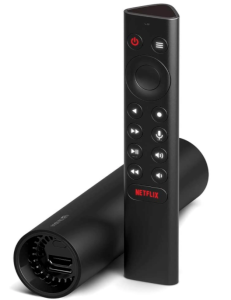 Amazon’s standard Fire TV Stick may not have the same 4K streaming and full-fledged Alexa support, nor can its remote control your TV like other Fire TV devices. But this is the absolute cheapest way to stream if you want to use an Amazon device. Unlike the similarly priced third-generation Chromecast and Roku Express, this 1080p streamer supports HDR10, as well as Dolby Atmos, which will give your content a little extra life if you TV and speakers support these standards. 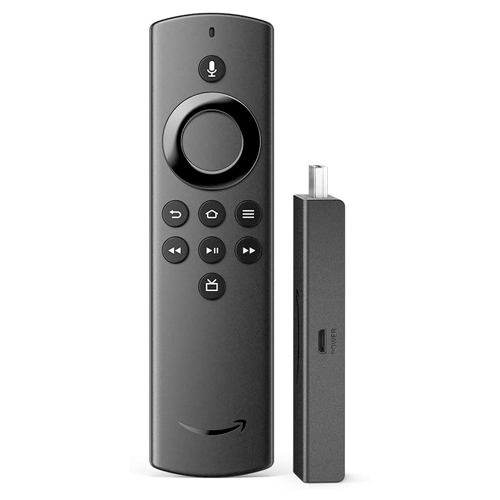 These streaming services will make you rethink your cable subscription