With millions of people still under stay-at-home orders, more people are working from home than ever before. According to a recent CNBC All America Survey, 42% of American workers who did not previously work from home are now telecommuting. This has had some unexpected benefits, such as lowered air pollution, but it has also brought to light the difficulty in keeping productivity levels high with a remote team. At this point, apps like Zoom — and the best Zoom alternatives —are the only type of human interaction many people have.

The best video chat apps make it easy for teams to create virtual video conferences as if they were in a face-to-face meeting. Over the last decade, dozens of video chat apps have been introduced to businesses around the country. Yet, only a dozen or so, the best of the best, have survived.

Most of the country has opted to use Zoom, a video conferencing software that’s easy to use and boasts crystal-clear conference calls. They’ve got a free version of Zoom you can use with up to 100 people for a maximum of 40 minutes. After that plans increase in capacity, features and price. Zoom has become the go-to for companies as well as individuals, book clubs, families and everyone trying to gather these days. 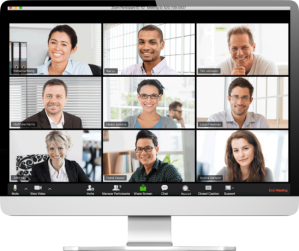 Personally, I’ve worked remotely while traveling full time for the past five years. In doing so, I’ve tried and tested a number of video chat apps while conducting business meetings and catching up with friends and family. Zoom is a common one, but there are plenty of Zoom alternatives out there to try.

Below, I’ll discuss my 10 favorite apps for both situations.

One of the clear winners to come out of the COVD-19 social distancing measure is Zoom. The customer base of this video conferencing app has exploded and now includes everyone from large-scale businesses to schools and groups of friends. I had never really used Zoom prior to 2020, but my friends have quickly caught on to the high quality of this app. The “cloud-based conferencing service” has both a free and a paid service. The free version allows for meetings of up to 100 participants for 40 minutes or less. Of course, limiting your time to 40 minutes can be quite problematic, so the paid version gives users the ability to host 500 participants for as long as necessary. Furthermore, the app offers an Outlook plug in, a built-in group chat and the ability to join a call via the mobile app or desktop program.

All of that aside, the best feature of Zoom is the fact that you can add your own background when video calling someone. Want to be underwater? No problem! Want to pretend you’re on safari? You can do that, too! With Zoom, you can be wherever you can imagine. 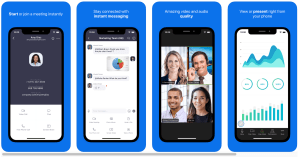 Google Hangouts is the original Google video conferencing app, but it was slated to be dismantled last year. However, its popularity has kept it alive. Personally, Hangouts is my favorite video conference app thanks to its reliability, ease of use and balance of features to functions. All of these features combined make it the best overall Zoom alternative.

While Google Hangouts is incredibly similar to Google Duo, it does allow up to 25 people to call in on a single meeting whereas Google Duo only allows for 12 users. Hangouts also has a great chat feature built into it. You can chat with up to 150 people when you aren’t calling, or you can chat with the people in your meeting while you talk. Plus, Hangouts allows you to share your screen if you’re presenting to the group. Hangouts usually lives in the sidebar of a Gmail account, but it’s available to any registered Google user for free. 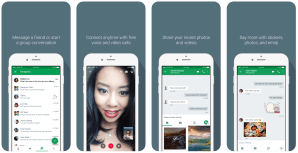 The Google trio of video chat apps is extremely confusing. Although I’ve only ever used Google Hangouts, there are actually three different conference apps within the Google portfolio, namely Google Hangouts, Google Duo and Google Meet.

Google Duo is Google’s answer to Apple’s FaceTime. However, it can be used across both iOS and Android devices as well as on pretty much any desktop computer from any browser. It can also be used on some Google Assistant display devices. While Google Duo was designed for video calling between two people, it can be used to connect with up to 12 cameras at once. In addition, Google Duo allows you to record a video message for people who may be away from their devices. It also allows for the use of filters and effects in videos recorded through the app. Just be warned that when you make a call through Google Duo, the person you are calling will be able to see your video before they answer the call. 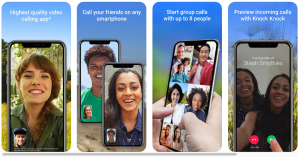 BEST APP YOU (LIKELY) ALREADY HAVE

If you want to chat with your colleagues or friends but you don’t want to clog up your phone with a new video calling app, consider using the calling feature on Facebook Messenger. This service allows you to call up to 50 people at once using its mobile app or directly from Facebook on your desktop browser. Only six of the cameras will show at once, but within the video streams, users can add GIFs, stickers and filters. Personally, I use Facebook Messenger to chat with my parents as they stubbornly refuse to figure out how to log into any other video chat app. On a positive note, I do find that Facebook Messenger tends to be more reliable than many other video apps, especially when I only have access to weak WiFi. 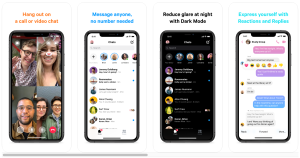 Skype is the OG of video chat programs. When I first started traveling solo 12 years ago, Skype was the only option for video calling home. Today, Skype is much the same as it was originally. As the rest of the world develops video conferencing apps with fancy features, Skype sticks to what it knows, video calling with a built-in chat function. The app, which is available for both mobile and desktop, allows for up to 50 audio users to chat simultaneously. The number of webcams you see while using the program is dependent on the device and platform you’re using.

One of the major advantages of Skype is that it allows for landline calling as well. So, if your cell phone is roaming, you can always call actual phones worldwide for pennies per minute using Skype. 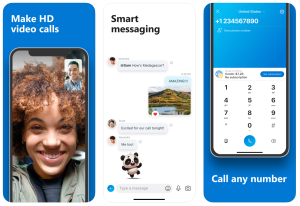 Houseparty is a relative newcomer to the world of video chatting, but it has gained popularity, especially across Europe, thanks to self-isolation features. The free app has branded itself a “face-to-face social platform.” That, combined with some of the unique features, is why I would reason that Houseparty should only be used for social gatherings rather than business meetings. Up to eight people can join a “room” on Houseparty, and your friends will get a notification if you’re in a room they can join. The one feature that sets Houseparty apart from the competition is the ability to play games. With offerings like pictionary, trivia and heads up, this app can keep you and your friends entertained for hours, even if you are worlds apart.

If you’re looking for the best video chat apps for happy hour with friends, this is the one to use. 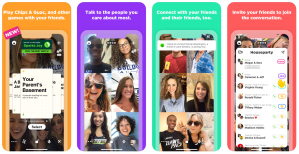 Businesses using Skype for consumers to communicate should strongly consider investing in Skype for Business. This platform, which was called Lync prior to 2015, has three distinct advantages. First, Skype for Business allows administrators to determine which users have access to which features, including international calling, meeting creation and call recording. Second, this platform allows for up to 250 active users in a single conference call. That’s more than ten times the number allowed by Skype for the average consumer. And, finally, this version of Skype boasts deep integration with Office365 as it is a Microsoft product. That means you can schedule meetings directly in your Outlook calendar and add all your Outlook contacts to your Skype list. Altogether, this is a great paid option for small to medium businesses. 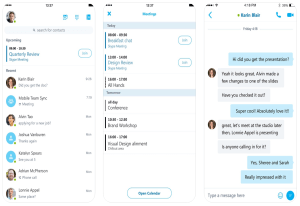 Sometimes simply called Meet, Google Meet is Google’s enterprise software for video conferencing. As one of the best Zoom alternatives, it can support up to 250 participants and an impressive 100,000 live stream viewers. Like Hangouts, Google Meet allows the host of the meeting to share his or her screen, and it has a chat function. Meet also integrates with Google Hangouts Chat, which is Google’s team-building platform. Plus, meetings can be placed into the schedule prior to the fact using the Google Calendar.

Please note that the default video setting for Google Meet is 720p, but if your device is struggling to run the app, you can switch the video to 360p. Google Meet is only available to G Suite subscribers. 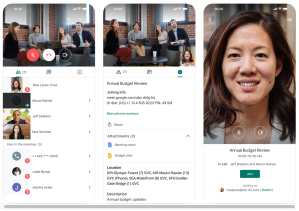 As a digital nomad, Slack has become my best friend. This chat-based program and workplace communication app allows my teams to stay in touch as if we’re working side by side. The organization of the chats allows for the creation of different groups or channels as well as one-to-one conversations. Slack also integrates with over 1,500 other apps, including Outlook, SalesForce and Google Drive. However good its chat functionality is, it takes a spot on this list thanks to its video chat feature.

Slack allows for up to 15 users to enter a single call. These can be voice or video calls, and from personal experience, Slack is quite reliable, even with a slow computer or internet connection. For team productivity, you really can’t beat this do-it-all app. 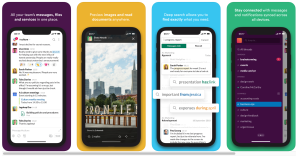 For large, company-wide meetings or virtual meetings with clients, GoToMeeting is my go to choice. While this is a paid service provided by LogMeIn, it does support up to 250 participants across a desktop app, a mobile app and telephone connectivity. However, the program does only allow 25 active webcams at one time. The mobile GoToMeeting app is particularly useful as it can be integrated with Siri for voice commands from an Apple device. It also provides cloud recording, so there’s no need to take notes throughout the meeting. Finally, it’s worth noting that GoToMeeting also syncs with Office365, allowing users to schedule and join meetings directly for their calendars. 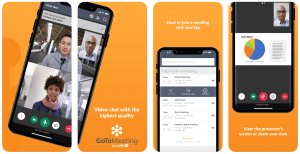