After “what am I going to vlog about,” the foremost concern for a video content creator is going to be which camera to choose. Catchy, funny titles might get people to click, but having a good camera is a major factor that will keep people watching. Of course, having a good camera is not a substitute for quality content, but it at least signals that you care enough about what you’re doing to make the investment.

While you could get a webcam that would probably improve upon the quality of the one built into your laptop or desktop monitor, it’s worth considering getting an actual handheld camera such as a point-and-shoot or even a camcorder. The simple reason is that the versatility will pay dividends in the long run. Even if you primarily vlog in front of a computer screen, you never know when you’ll want to make an on the go video or take some photos for your website. While the majority of cameras have video features, there are some specific things to look out for if you create video content.

One feature to look for in a vlogging camera is a screen that rotates 180°. If you’re pointing the camera at yourself, you’ll want to make sure the shot looks good. There’s nothing worse than going back to your camera only to realize your perfect shot was ruined by the fact that you forgot to press record. The camera also should have a mic input, for fairly self-explanatory reasons. Beyond that, you’ll want to look for features based on what your needs are. Whether you need something for high-quality audio or you want something you can slip in your pocket while traveling, these are some of the best cameras for vloggers available.

The budget brands that you find on Amazon won’t stack up to Panasonic or Sony cameras, but they can still come surprisingly close. This affordable camera has a lot of features that suggest it was designed with vloggers in mind. It includes a remote control, so you can make videos that would otherwise take two people to film. You can record while charging, and the screen completely rotates so you can see what you’re recording while you’re filming. As for the technical specs, it shoots 1080p video, 24MP photos, and it has a 16x digital zoom. The USB port allows you to share live videos and easily transfer your files.

Pros: Includes a remote control, which is a great addition for vloggers who travel solo. Comes with two rechargeable batteries. Has a hot shoe for mounting a microphone or flash. 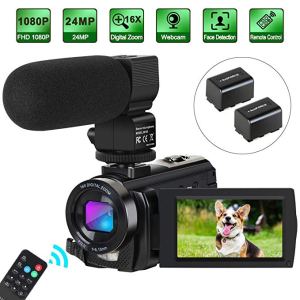 Depending on the kinds of videos you create, you may want to consider investing in a sports camera. They’re compact, making them great for traveling, and they’re generally water-resistant. That’s the case with this affordable action camera from AKASO. It can be used for photos and videos, and a wireless remote control bracelet allows you to capture photos and videos with the camera facing you. WiFi capabilities allow you to easily save and share your content, and 4K video will ensure that content looks as good as it should.

Cons: Battery life is not that long. 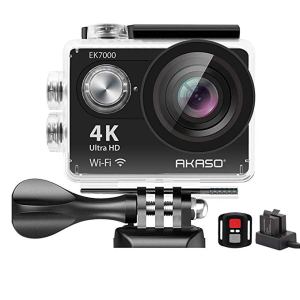 An affordable camcorder for vlogging is this 1080p camera from kicteck. It features a fully rotating display screen, a built-in fill light, and a hot shoe for mounting a light. Included is a micro USB to USB/AV cable, allowing you to plug and play to a variety of sources like your computer or TV. It also has facial capture and a beauty filter. There are various built-in settings that make it a good option for vloggers. You can pause videos and keep recording without having to make a new file, and you can also plug it into a computer and use it as a webcam for live recording or chatting.

Pros: Affordable and portable camcorder with features that are good for vloggers such as a rotating display screen, webcam functionality, and a pause feature to record without creating a new file.

Cons: Has a built-in mic, but doesn’t support external mics. 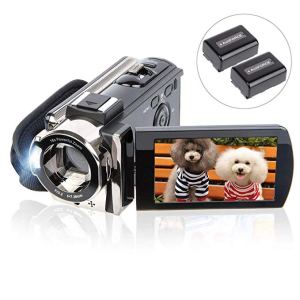 A more portable and compact option is this affordable pick. It can shoot video in 2.7K ultra-HD resolution and 24MP photos. The display screen flips up, so you can see what you’re shooting, and it has a timer function to easily capture photos and videos of yourself. It’s powered using a rechargeable battery, and you can use the camera while it’s plugged in. And, if you’re always shooting on the go, the anti-shake feature will help stabilize your shots. The camera is well-suited for taking photos and videos of people, as it has a face-detection feature. It can even be set up to take a picture once a smile is detected.

Pros: Compact, making it perfect for vloggers on the go. The flip screen makes it easy to see what you’re shooting, and the camera shoots video in 2.7K HD resolution.

Cons: Camera does not have a built-in microphone. 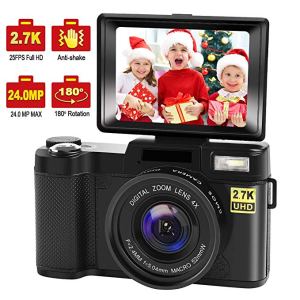