* JAY-Z and Beyonce releases baby photos, confirms names
* JAY-Z’s new album, 4:44 is no longer limited to Tidal
* Is a collaboration in the works for 2017?

The Bey Hive has been in high gear for weeks. First came a low-key Instagram post from Mathew Knowles teasing, “They’re here.” Then fans anxiously awaited an official birth announcement while the littlest Mr. and Ms. Carter were kept in the hospital and eventually released. Finally, last Friday, Beyoncé shared a first photograph of the twins, captioned with a confirmation of their names: Sir and Rumi.

But it hasn’t been all about the Beybies. JAY-Z’s latest album 4:44 had a surprise drop and went platinum almost immediately. Originally a Tidal exclusive, it’s now available for download without a subscription to the Carters’ signature streaming service.

Interpreted widely as a remorseful response to the private drama addressed in Beyoncé’s Lemonade, Newsweek correctly notes that “this is as close as any of us will ever come to knowing what goes on behind closed doors in the Carter household.” 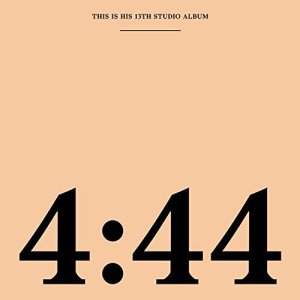 In the opening track, “Kill Jay-Z,” he seems to accept his share of the blame for the infamous elevator brawl with sister-in-law Solange following the 2014 Met Gala, rapping, “You egged Solange on / Knowing all you had to do is say you was wrong.”

The lyrics to the title track “4:44” read like an apology to Beyoncé: “I apologize / often womanized / Took for my child to be born to see through a woman’s eyes.” He even goes on to directly call out “Becky with the good hair” of Lemonade fame in “Family Feud,” with the line, “Yeah, I’ll f*ck up a good thing if you let me / Let me alone, Becky.”

While the Hive has speculated that Becky’s true identity could be fashion designer Rachel Roy, no one really knows. She might be the same Becky from Sir Mix-A-Lot’s “Baby Got Back.” Perhaps we’ll find out from the couple’s up-coming collaboration, rumored for release later this year.

In the meantime, celebrate the Knowles-Carter’s big week by downloading JAY-Z’s new album, above. And check out our list of suggested gifts for the new Bey-bies here.