* Hollywood vets Kevin Dickson and Jack Ketsoyan release first book, “Blind Item”
* So successful that a sequel is already in the works
* Don’t miss their advice for young aspirants

“This is not a true story, but every story inside is true,” boasts the back cover of “Blind Item.” The 358-page narrative about an Ohio-to-LA transplant named Nicola making her way through the rough and tumble life of young Hollywood is a lighthearted romp addled with drugs, celebrities, wanna be’s and plenty of sexy and salacious gossip and intrigue. 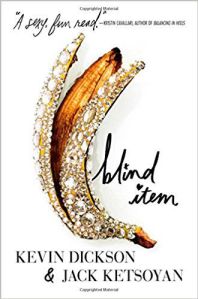 Written by entertainment journalist Kevin Dickson and publicist Jack Ketsoyan, the book takes their shared experience of Hollywood’s underbelly and synthesizes it into “heightened truth.” Despite suggestions that they write a salacious tell-all, Ketsoyan tells SPY that they “didn’t want to out anyone.”

“We wanted to write a love story that was fun,” adds Dickson.

As Nicola’s romance with movie star Seamus O’Riordan develops, readers are introduced to a modern feminism that depicts women who are confident and guilt-free about sex. “We’re getting lots of feedback from women who feel inspired,” says Ketsoyan, who has worked with big PR agencies like PMK and EMC Bowery, while representing stars like Jennifer Lopez.

In the book, Nicola is also a publicist, though as her journey continues, she learns that the real-life soap opera of celebrity doesn’t always have a fairytale ending. And despite working your PR magic, you can’t always control the final outcome.

A fun read in the vein of “The Devil Wears Prada ,” the book captures the biting and often cynical nature of Hollywood, with a wink and nod to everything from staged paparazzi shots, to child stardom, fake romances and reality TV.

This is Dickson and Ketsoyan’s first book, but the two friends must have succeeded. There’s already a sequel in the works.

Asked what advice they have for the new crop of Hollywood hopefuls, Ketsoyan says to “be ready for what you’re in for. It won’t be easy; there will be lots of ‘no’s.’ You have to want it.”

Slightly more practical than inspirational, Dickson says not to “give anyone footage that will bite you in the ass,” and “if you do reality TV, learn to say ‘no.'”