The term ‘boombox’ may bring up images from the late 1980s, either of a rap music video or John Cusack declaring his love for Ione Skye in Say Anything. But boomboxes aren’t the just relics of a musical era gone by. Boomboxes work alongside today’s technology while also acting as an easy way to listen to your extensive collection of cassettes and CDs that have been relegated to the basement.

Boomboxes come in a variety of forms, from more modern options that connect only through Bluetooth to traditional boomboxes that give users the ability to listen to a variety of media formats. Depending on your needs, some boomboxes can play cassette tapes and smartphones, connect to an electrical outlet or run for a full 24 hours outdoors on a single charge (we don’t remember any waterproof boomboxes back in the ‘80s).

From cassettes to CDs, MP3s to the radio, and Bluetooth and aux cords for today’s newest media, boomboxes are just as relevant today as they were 40 years ago and even more powerful and durable.

Listen to your music anywhere with the waterproof JBL Boombox, which features an impressive 24 hours of playback time, making it an excellent portable boombox to take on trips or use in any location regardless of whether a power source is nearby. The Bluetooth JBL speaker can be connected to up to two smartphones or tablets at once and also includes dual charge out, meaning it can charge your small electronics while playing music.

Cons: The JBL Boombox is significantly more expensive than the other boomboxes on our list and to fully charge the boombox’s battery requires 6.5 hours of charging time. 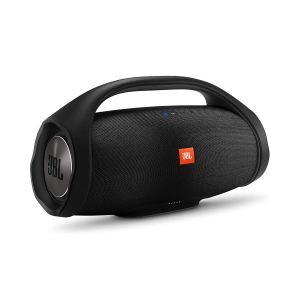 Make your old collection of music new again thanks to the Sony CD/MP3 Cassette Boombox, which can play CDs and cassettes, as well as MP3 players and smartphones using the boombox’s aux port. The built-in cassette deck also has a recording function. The Sony features mega bass boost circuitry that enhances low-frequency bass performance, bringing your older media to life.

Pros: A boombox and alarm clock in one, the Sony includes an AM/FM tuner with a 30 station preset and a sleep timer.

Cons: The Sony should be unplugged during lighting storms. It can also run for 19 hours on batteries, but batteries are not included in this buying option. 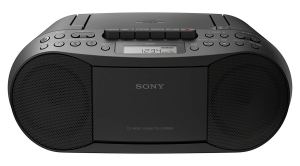 Play CDs, listen to the radio or connect your MP3 player, tablet or smartphone through Bluetooth or the aux port on the Magnavox Boombox. Music can be played through the Magnavox speakers or users can listen solo using the headphone jack.

Pros: Be the life of the party with the Magnavox, which features coloring changing LED lights that pulsate to the beat of the music (this feature can also be turned off).

Cons: Unlike the Sony, the Magnavox doesn’t include a clock or alarm and it doesn’t come with a cassette player. 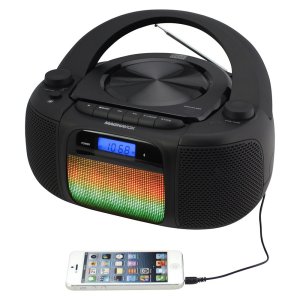