The wireless earbud space is starting to get crowded, but you can break down some of the competitors into a few different categories. There are budget-friendly brands like JLab and Anker, audio-focused companies like Bowers & Wilkins and Sennheiser, and tech-first brands like Apple and Google.

Bose occupies an odd place in the market, because they charge premium prices but aren’t an audiophile brand, and they’re not a tech brand, either. But their brand new QuietComfort Earbuds II are a reminder of what Bose does best; craft stylish products with a crowd-pleasing sound profile and incredible active noise-canceling. For the sequel, Bose hasn’t just tinkered with the original QuietComforts, but completely changed the shape, the fit, and the case, while also packing in new active noise-canceling (ANC) tech and streamlining the touch controls.

Bose was clearly listening for feedback when designing these new earbuds, because most of the common complaints in reviews, including SPY’s, have been remedied. Bose’s excellent new earbuds live up to the hype. Whether or not they live up to the sticker-shock price is a more personal call, but here’s what you should know before pulling the trigger. 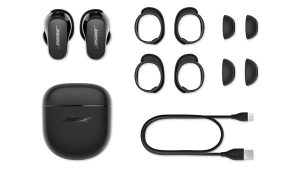 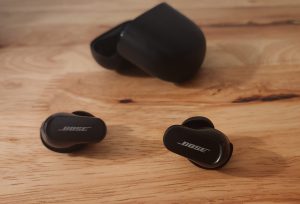 The design of these earbuds is a substantial improvement over the original QuietComforts. Bose slimmed down everything about these earbuds, including the case and the buds themselves. Rather than the awkward pod shape, the QC 2s have a more traditional tapered earbud shape. They’re both smaller and lighter, so they’re less conspicuous and more comfortable. They’re available in black and soapstone, a muted white color.

Bose has removed the winged silicone tips, replacing them with customizable ear tips and stability bands. They’re slightly less secure feeling without the wings, but I would comfortably be able to ride my bike on uneven streets without worrying about them slipping out, and they should be more than capable of handling workouts.

Bose has swapped its upright clamshell case for a slimmer case that lies flat, utilizing a silhouette that will be familiar to AirPod owners. Bose also replaced the latch closure with a more subtle magnet. The case has a single light on the front for charging level, and another light on the inside that indicates Bluetooth status. The back has a single button, which is used for Bluetooth pairing.

The controls on the QC II earbuds are simple and cover most of the functions you need. Tapping the earbud once will play or pause a song, double tapping will skip the current track, and triple tapping will return to the previous track.

You can swipe up and down on either the left or right earbud to raise and lower the volume. This feature works fine, but I have accidentally paused the music when swiping. I’ll likely mostly use my phone to control the volume.

A new feature that wasn’t present on the original QC earbuds is the ability to customize shortcuts for both the left and the right earbud. This can be done through the Bose Music app. 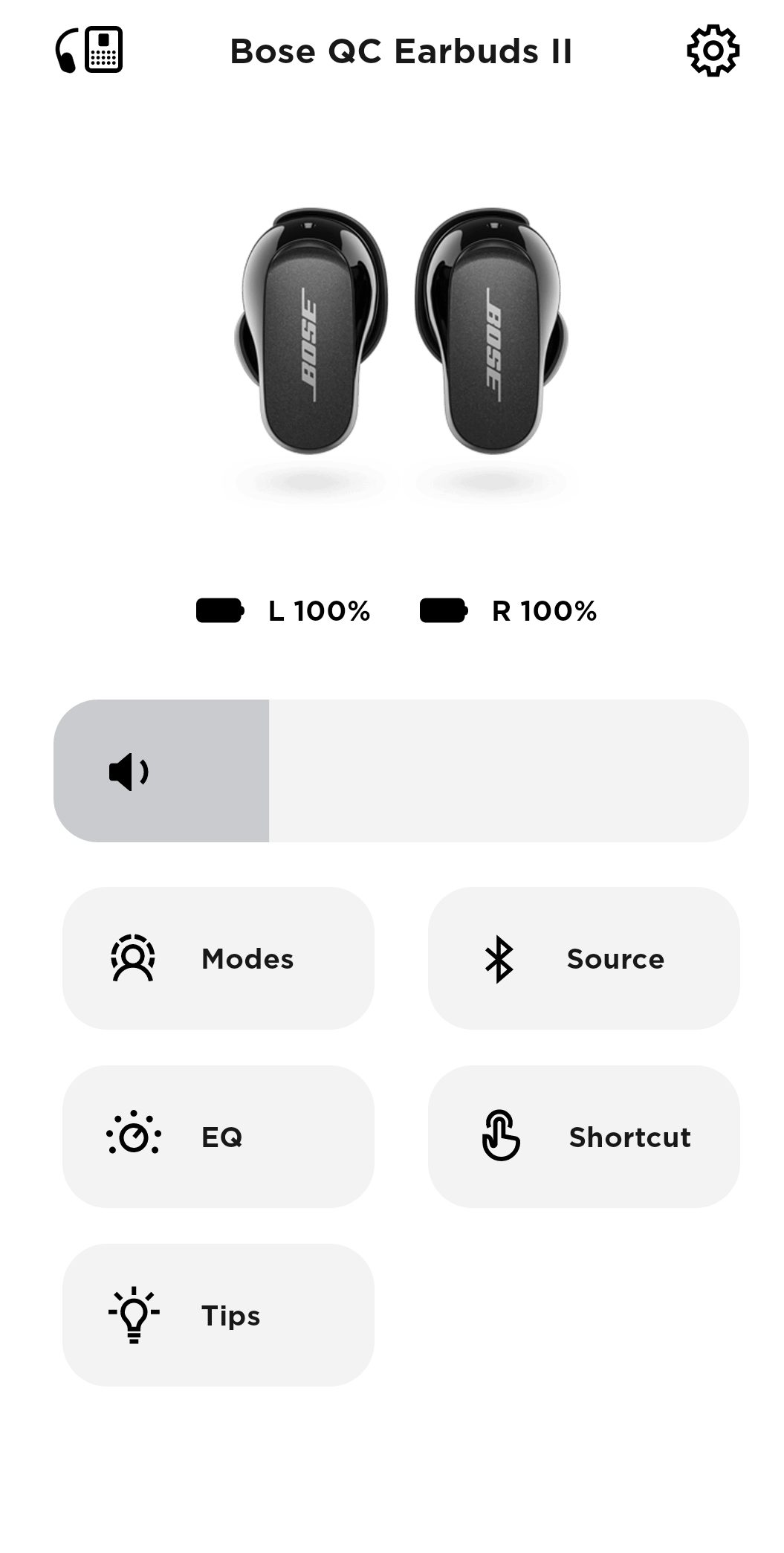 Pressing and holding will either toggle through your ANC modes (which are also set through the app) or bring up your voice assistant. I don’t use Google Assistant on my phone very often, so I set both sides to cycle through ANC modes, a feature I use constantly.

Playback will stop when you remove an earbud, and putting it back in will automatically start playing again. This feature is responsive and comes in handy when you quickly need to have a conversation. If you don’t like this feature, you can turn off “In-ear detection” in the Bose Music app.

Though I haven’t had issues with the app, some online reviewers have complained about it. Likewise, I’ve had my Bluetooth connection drop once or twice, so it seems that Bose may still have some software issues to fix.

Bose’s has been making speakers and headphones for a long enough time, and the audio quality reflects the experience they bring to the table. These earbuds do justice to different genres. The booming bass of Pusha T’s “Neck & Wrist” is felt clearly, without overwhelming the intricate production. Portishead’s Isaac Hayes sampling “Glory Box” has a warm and fuzzy sound, with the intentional vinyl pops coming through. 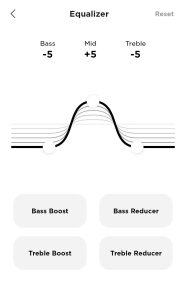 As is the case with the original QC Earbuds, you can play with the sound through the equalizer (EQ) in the Bose Music app. You can either drag the dials for the mids, trebles or bass for a totally customized sound or use the “bass boost,” “bass reducer,” “treble boost” and “treble reducer” buttons.

Bose was the first brand to make noise-canceling headphones commercially available. It’s no surprise that they take ANC seriously, especially with brands like Sony nipping at their heels. For these earbuds, Bose has rolled out a new feature called CustomTune.

When you put the earbuds in, they produce an orchestral tone and record the echo, creating customized sound and noise-canceling based on the shape of your ear. This feature is an impressive step forward, although the tone is surprisingly loud and somewhat irritating.

The performance isn’t wildly better than the original QC earbuds, but it’s an improvement over already excellent performance. Simply put, there’s a reason Bose is known for noise canceling. Ambient noise disappears, and loud noises are brought from a roar to a hum. 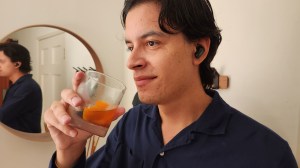 I’ve comfortably listened to podcasts while on a loud city bus and subway train without needing to turn the volume up. I’ve yet to try them on an airplane, but the original QC earbuds performed well on a flight while I was seated behind the engine, so I have no doubt that these can handle air travel, too. Like the originals, you can have up to four ANC modes. The two defaults are Quiet and Aware, and you can customize two more modes.

Aware mode also has ActiveSense, which automatically tones down sudden loud noises such as a truck passing, then returns to Aware once the noise has passed. This also means you can never fully turn off ANC.

To get the best performance from the earbuds, it’s important to find the right fit, as I’ve found the noise canceling to be much more impressive when the earbuds were properly seated. Since there are three tip sizes and three band sizes included, I’m still finding the most comfortable fit for me. It’s time-consuming, but worth it for the best comfort, a secure fit, and optimal noise canceling.

If there’s one category that Bose is still working to make strides in, it’s battery life. The 6-hour life in the earbuds is on par or below its closest competitors, Apple and Sony. You do get 3 extra charges with the case, but the total battery life is similar to or below its peers.

In fact, Bose actually took a step back in battery performance from the QC Earbuds. The earlier model was wireless charging compatible, and these are not. Presumably, they sacrificed this feature in order to slim down the case. It’s not a feature I miss, but some users will be disappointed, especially since wireless charging is increasingly becoming a standard.

With the case, the earbuds are more than sufficient for everyday use, but the battery life won’t impress given the competition.

Many tech companies are content to subtly tweak their product year after year, so it’s somewhat refreshing to see a company like Bose make big strides. For the sequel, Bose went back to the drawing board, completely redesigning the case and earbuds to be more portable, comfortable and stylish.

Bose has yet again proved its bona fides in noise canceling, maintaining good features like 10 different ANC modes and Aware with ActiveSense, while making strides with new features like CustomTune. If ANC is what you need, these are the earbuds to get.

Battery performance is solid and reliable, but it’s not as impressive as its competitors. There’s also no multi-point Bluetooth or Qi charging.

A big consideration is the price. At $300, these are a pricey pair of earbuds, and they’re above and beyond what some people are willing to pay. But their headphone-beating ANC performance allows you to leave your over-ear headphones at home when flying or on a noisy commute. And the secure, customized fit and water resistance means you don’t need hook earbuds while running or working out. Simply put, the QC Earbud 2s are do-anything, go-anywhere earbuds, and an impressive step forward over the already great QC Earbuds.

Trump Looks to Ditch His Own Social Media Site