In 2015, Caitlyn Jenner revealed to Diane Sawyer in an interview that, “for all intents and purposes, I am a woman.” At the time, she was still being referred to as Bruce, known as the legendary Olympian, father of Kendall and Kylie, and husband to Kris Jenner as seen on Keeping up With The Kardashians. Two years later, Jenner has released her memoir, “The Secrets of My Life,” written during the first years following her transition.

Throughout the memoir, Jenner reflects on the inner conflict she experienced growing up in an era of rigidly defined gender identities, plagued by the cruel irony of being hailed by an entire nation as the ultimate symbol of manhood, during her career as an Olympic athlete. Jenner’s story is told in chronological order, from her Olympic triumphs, to her rise to fame on Keeping Up With Kardashians as Bruce, to the eventual transition to Caitlyn. 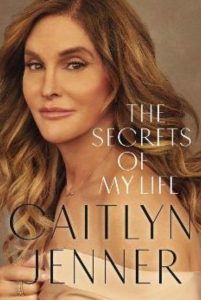 The Secrets of My Life by Caitlyn Jenner

She delves deeply into her life in the public eye, her marriages and her struggle to hide her gender dysmorphia for decades. The memoir is also peppered with juicy details, from her married life with Kris Jenner, thoughts on the O.J. Simpson trial, and life with what she calls “The K-Troop.”

Lastly, she takes an honest look at what led to her decision to become Caitlyn. She also details her concerns over how the transgender community and world embraced her prior to announcing her transition, addressing the backlash of criticism from the transgender community after her revelation, and acknowledging her privilege as “a clueless rich white woman,” repeatedly.

“The Secrets of My Life” is filled with incredibly candid and moving stories that chronicle Jenner’s life by tracing her successes, failures and ultimately, her long and eventful journey to becoming her “true self.”