Add a new 360° dimension to your time-lapse videos with the Camalapse 4.

This clever egg timer-esque device is perfect for creating b-roll videos or producing panoramic masterpieces. Simply attach your camera to the Camalapse, then rest it on a tripod or flat surface. Twist and point your lens at your chosen start point. Hit record and watch it go.

Capable of supporting a variety of camera models, the Camalapse 4 captures up to 360 degrees of footage over an hour. It is the fourth-generation Camalapse model, adding a new internal mechanism to improve product strength and robustness. The improved design also includes a more ergonomic feel and allows for easier spinning, which produces smoother results and less choppy video. 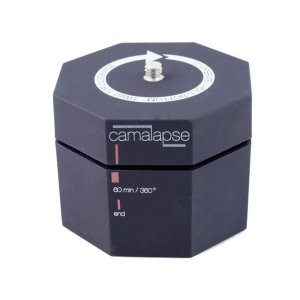 A major addition to the Camalapse 4 is its capability to hold a DSLR. Previously, the device could handle many smartphones, compact digital cameras and POV cameras (including the iPhone, GoPro, Contour and Drift), but now the unit is capable of handling heftier cameras up to five pounds.

Sitting at just 2.3 inches high and 2.7 inches wide, the Camalapse is a pocket-sized photographical gem. Take it on your travels to capture the memories in their full glory. Or, take it to set to give your music videos, class projects and short films a whole new look.