* A classically styled mini sculpture of the classic face palm
* Have you, at any point, failed to “make it so?”
* Far less annoying to colleagues than a “shame bell”

Perhaps no space captain has ever expressed disappointment quite like Captain Picard. As the classically trained Shakespearian Patrick Stewart plays him, the captain of Enterprises D and E, and, as deep nerds will remember, a beat up yet super cool looking starship called the “Stargazer,” has given us a great many enduring memes as well as wisdom to live by. So when you’re not quite living up to that wisdom, what better way to remind yourself of the perpetual imperfection that is the human condition, than a handsome, timeless-looking sculpture of the Picard face-palm? This moment from Star Trek: The Next Generation has already been carried into the future as a fixture of the .gif keyboard and now it can be a monument on your desk at work, too. Because on a Monday morning, there’s nothing like an accidental send of a half-written email, or spilling some tea– Earl Grey, hot, naturally– all over the stack of your presentation handouts, to remind you that while Commander Data may for some obscure android reason envy our human emotions and failings, we may just as often envy the robot’s flawless competence. 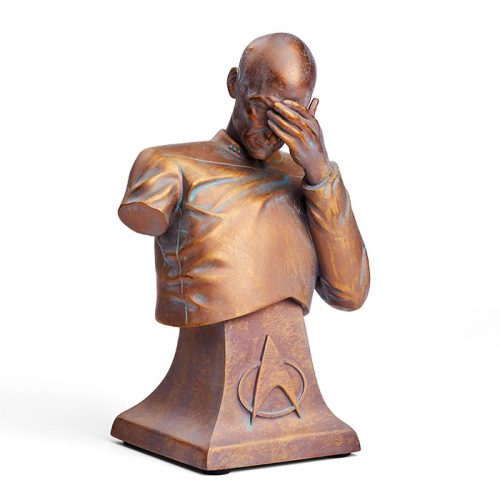 You’d think, with such a competent staff, Picard would’t be face palm-ing quite so often. But then take a moment to make like Deanna Troi and empathize, and you soon come to the conclusion that, between the cosmic mischief of the Q, the short temper of the Klingon tactical officer, and the Ferengi showing up trying to sell you back your old spaceship after you had to abandon it in a fire, and you can see why the face palm developed into such a habit with Captain Jean Luc. Not to mention the apparently ubiquitous 24th-century fashion for weird yoga jumpsuits, or the distressing number of Starfleet cadets who become miserably addicted to the holodeck. And don’t even bring up the Borg. Yet, a whole starship’s crew worth of annoyance aside, Picard is a truly inspirational figure. Perhaps because he has just a little less toxic masculinity than Kirk, or perhaps because he listens to Whoopi Goldberg’s Guinan whenever he has the chance – if there’s one thing the show is always consistent on, it’s that Guinan is always right. Even if he tells you that, literally, the entire universe is wrong – Picard is someone who encourages us to do our best. Now with this ThinkGeek exclusive Captain Picard face palm bust, you can give yourself some added motivation to “make it so,” or, and it’s only a bad pun if you work in social media, “engage.”