A new, unauthorized yet unique biography has just been released on Beyoncé, entitled Beyoncégraphica, written by Chris Roberts. The book is an innovative graphic biography celebrating Beyoncé, her genius and highlights of her successful career as told through over 100 specially commissioned infographics and revealing photos.

As a singer, artist, activist and mother, Beyoncé is universally recognized as one of the world’s top performers. The book details her 26-year career and how a girl from Houston, Texas transformed herself into one of the biggest stars in the world. 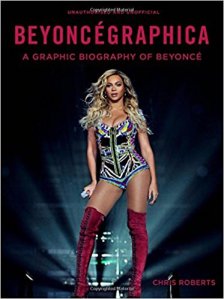 Told through a blend of elegant photography, witty personal insight and a slew of infographics, Beyoncégraphica is the preeminent story of her life, chronicling how she went from the lead singer of one of R&B’s biggest girl groups to a solo pop star all the while without compromising her image. We learn how she continues using her platform for good and proving that integrity and humility can coexist with fame and fortune.

Author Chris Roberts, is based in London and has written about music, films and books for everyone from David Bowie to Janet Jackson. He has also published books on Kate Moss, Lou Reed, Michael Jackson, Tom Jones, Abba and Scarlett Johansson.