There are very few defining moments off the basketball court that would warrant the amount of attention garnered by LeBron James a) leaving Cleveland for Miami, and b) making his storied return to Cleveland. But the caliber of player that James is, is hardly seen in the NBA all that often. Still, for all the headlines he generates away from the arena, it’s still his actions as a player on the court that makes him who he is today.

Which is why with the NBA playoffs in full swing, it’s worth flipping through “Return of the King: LeBron James, the Cleveland Cavaliers and the Greatest Comeback in NBA History” to fully understand the gravity of James and the Cavaliers’ astonishing comeback in the NBA Finals against the Golden State Warriors last year. After all, who would have a thought that James and co. could have made the run they did to topple the Warriors after being down 3-1? 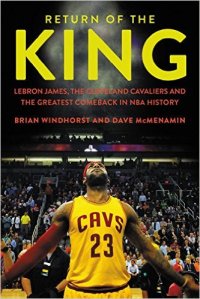 Return of the King...

This brand new book takes you through the fascinating ride that culminated in a heart-stopping Game Seven. With unprecedented access to James, his agent Rich Paul, Cavaliers GM David Griffin and Cavaliers Coach Ty Lue, co-authors Brian Windhorst and Dave McMenamin reconstruct the Cavaliers’ championship winning season in a way that practically puts you on the sideline, the locker room and in the huddle.

“Return of the King” is without a doubt the definitive oral history of the Cavaliers NBA Championship as told by the individuals and organizations involved. It’s also a testament to LeBron’s talents and leadership, both on the court — and in the locker room.