Dolby Atmos is one of the most exciting and immersive ways to experience surround-sound in the comfort of your home, but not every living room or media den is ready for the many speakers a true Atmos system requires. Fortunately, a number of A/V brands have this holdup in mind, which is why you’ll see plenty of soundbars on shelves that can process Dolby Atmos sound.

While a full 5.1.2 surround configuration (or higher) is the only way to get true Atmos in your home, many of these Atmos-equipped soundbars do a pretty great job at simulating the three-dimensional Dolby sound-staging.

Recently, we were able to check out Denon’s competitively priced and super-stylish DHT-S217, a cost-friendly soundbar alternative to spending thousands on a multi-speaker setup. Was it perfect? Not quite, but still very good. Read on to learn more about what we thought. 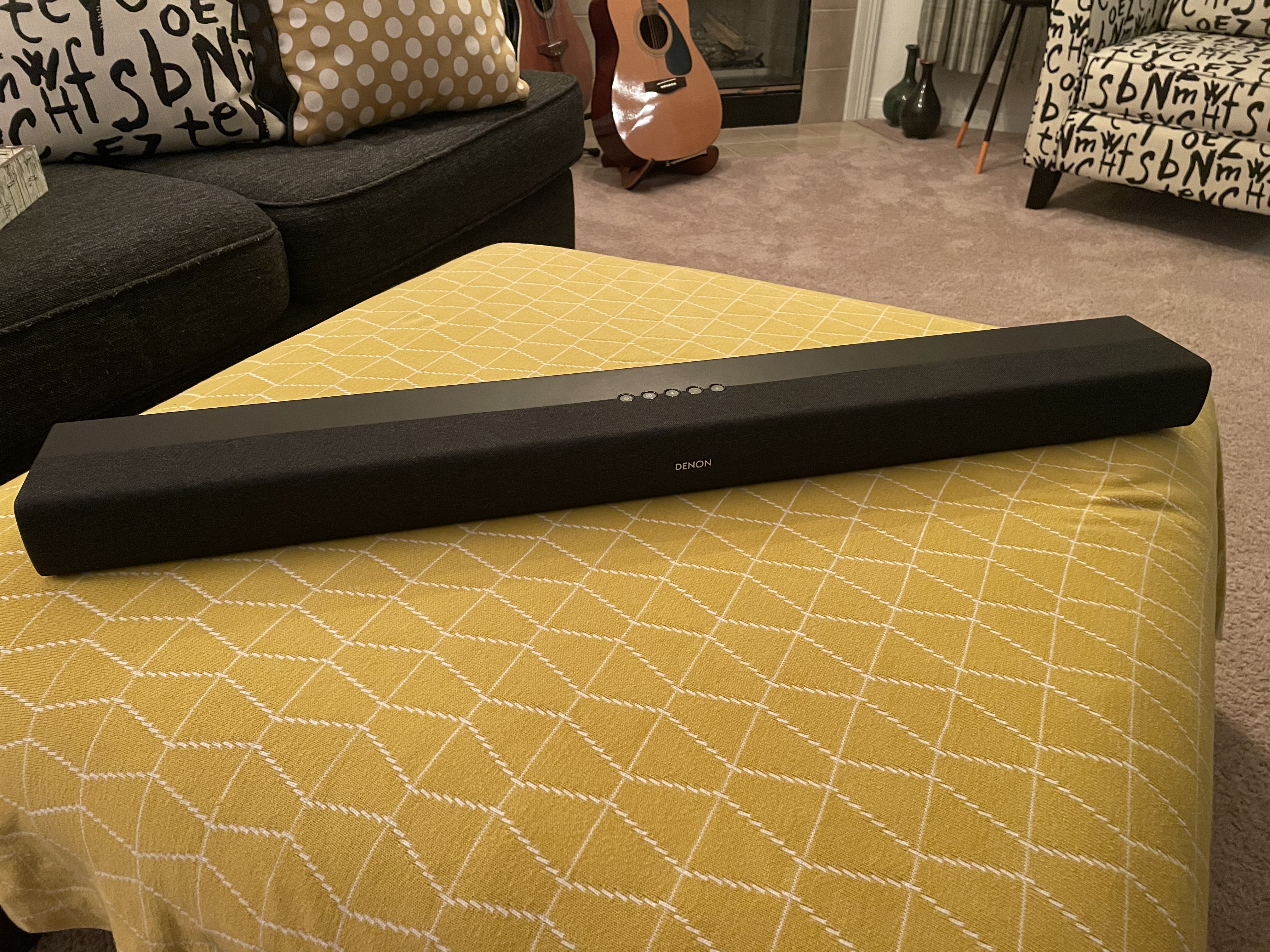 The Denon DHT-S217 is a classy-looking piece of audio gear, from its greyscale fabric covering to its slim, low-profile chassis. Behind the curtain, the bar is equipped with two one-inch tweeters, two midrange drivers, and two down-firing woofers located underneath. We also appreciate the inclusion of rear-facing keyholes if you want to mount the bar underneath your TV.

Seeing as Dolby Atmos is a multi-layered surround-sound experience, with audio hovering around both vertical and horizontal listening planes, a bigger bar with numerous drivers is going to deliver an experience more akin to a realistic Atmos system, but that’s not the idea with equipment like the S217.

What we’re looking at here is a compact soundbar that is designed to drive as much of Atmos’ immersive sound-staging as possible, and the results are pretty astonishing, especially when you consider the size and the absence of a dedicated subwoofer (although you can add one if you’d like).

Conveniently, the S217 can also act as an A/V hub, with both an HDMI eARC output and an HDMI input for connecting game systems, players, and other components directly to the soundbar. There’s also a digital optical output, an auxiliary hookup, a subwoofer pre-out for connecting a third-party sub, and a USB input. And while there are no Wi-Fi capabilities to speak of, the S217 is Bluetooth-ready, which means you can stream music through it using your phone, tablet, or laptop. 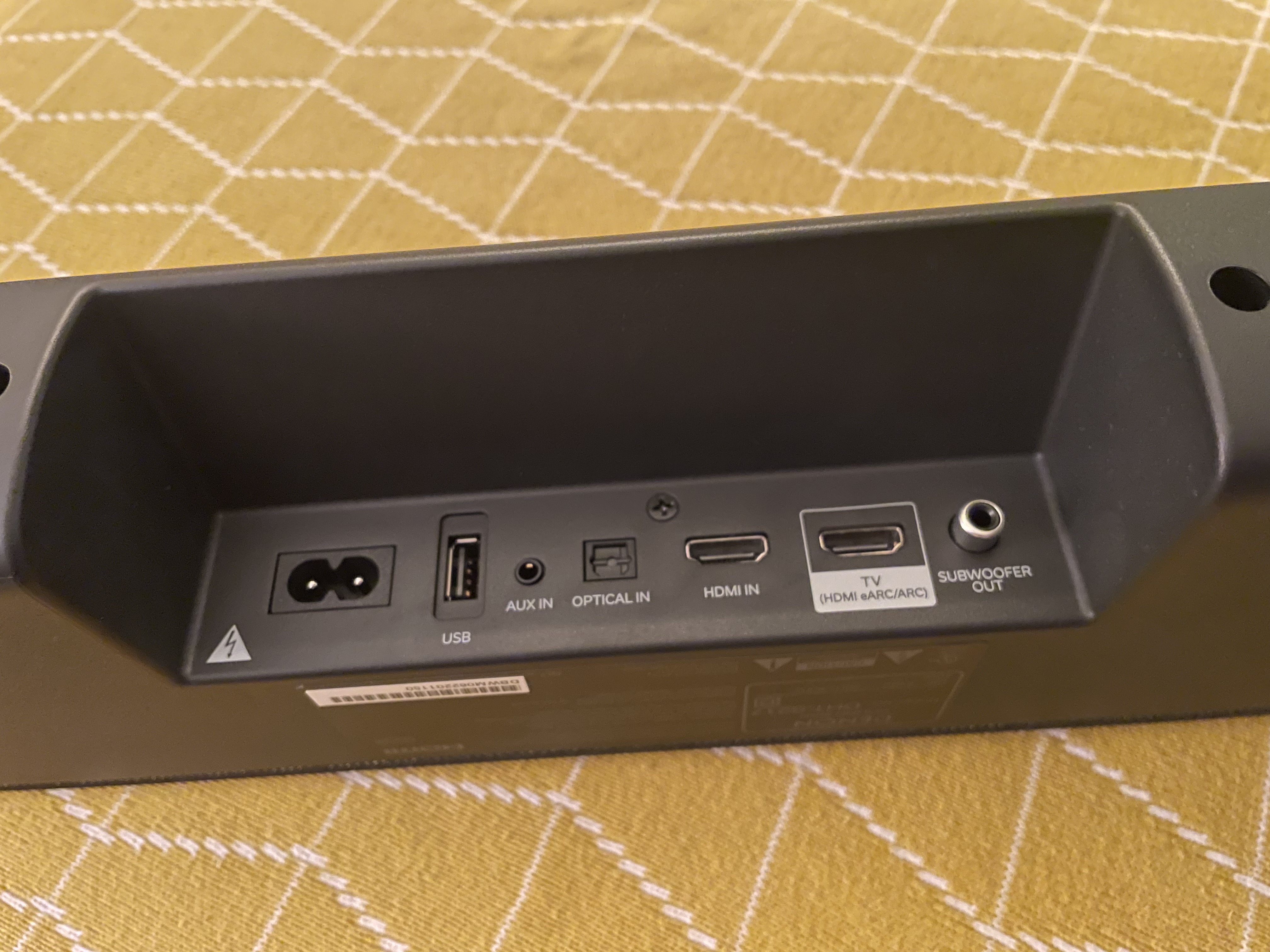 Keep in mind that if you’re looking to get as close to Dolby Atmos as you can, you will want to use HDMI exclusively, seeing as an Atmos signal can’t be handled by any other type of audio connection. This means you’ll also need to be using a TV that supports HDMI ARC or eARC, and that the TV’s HDMI control settings (often billed as HDMI CEC) are enabled. 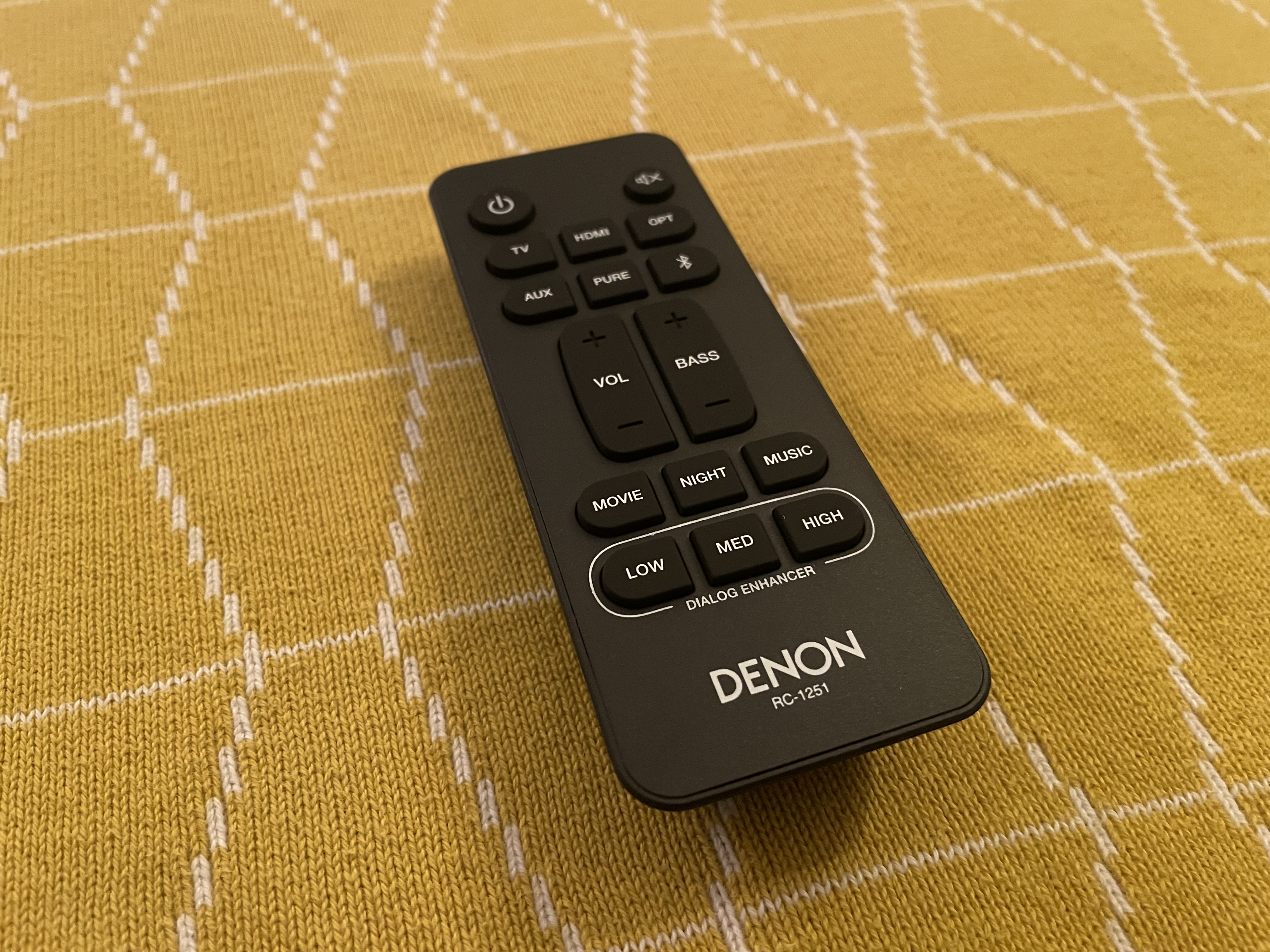 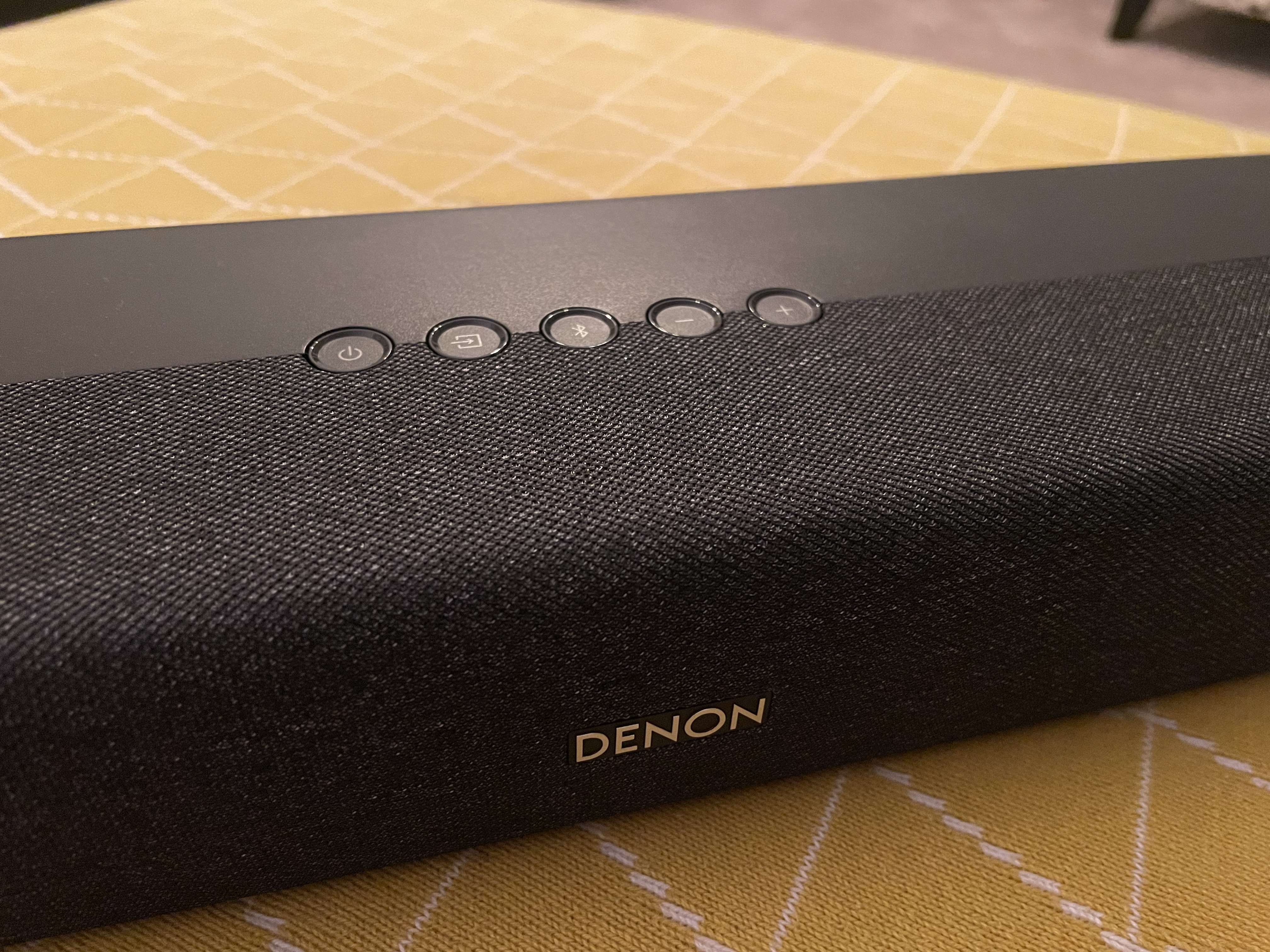 After hooking up the S217 to our TV’s HDMI ARC connection, it was just a matter of confirming that HDMI CEC was toggled on, and we were up and running. Better yet, thanks to CEC, the S217 was automatically powered when we fired up our TV, and shut down when we turned off the set (although we have a bit more to say about this below).

To put the audio-pedal to the metal, we decided to give Netflix’s El Camino: A Breaking Bad Movie a spin. Man, what a thrill. The cinematic sequel to the Breaking Bad franchise is a propulsive nail-biter of a film, and the movie’s Dolby Atmos mix was handled beautifully by the S217.

Without even having to touch the soundbar’s EQ adjustments, dialogue was rendered crystal-clear, with gunshots, car engines, and other low-frequency phenomena given the attention needed by the internal woofers. And for our mid-sized apartment living room, the S217 did a great job bouncing sound around the walls and ceiling for surround simulation, while keeping the most crucial audio (particularly dialogue) center stage.

Off-cinema, we also linked up our iPhone 12 and streamed Apple Music through the soundbar. From the raw, guitar-dominant hell-scape of Slayer’s Seasons in the Abyss album to BØRNS‘ Dopamine, a kaleidoscopic suite of bubbly, electronic pop, the S217 delivered the details and plenty of thump across music genres. 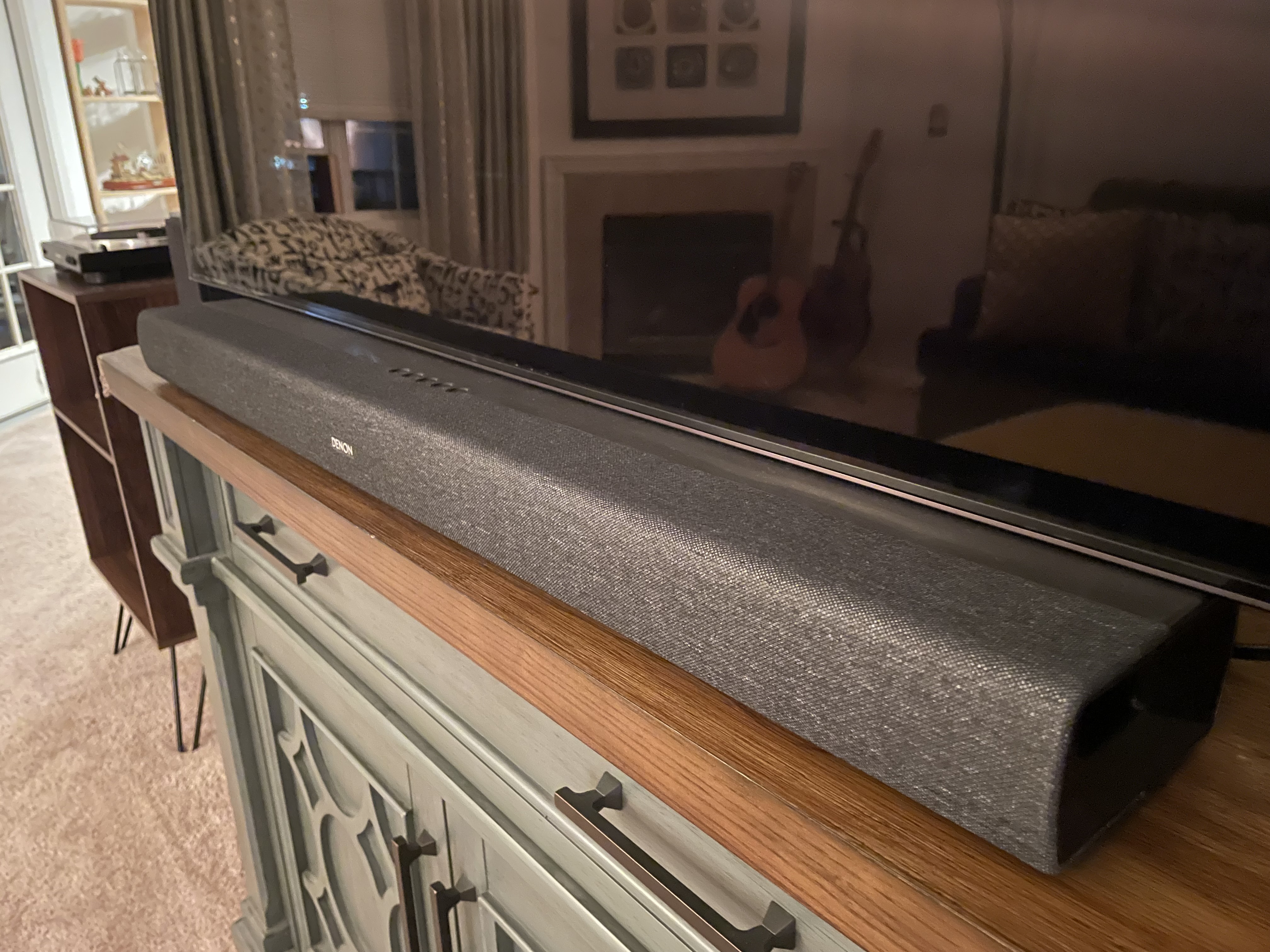 We addressed this point above, but we’d like to reiterate: A soundbar is never going to give you a complete Dolby Atmos experience. Even the most expensive Atmos-ready soundbars on the market, like the Sonos Arc, are only capable of delivering an Atmos simulation.

That being said, we had a couple of audio concerns during our testing of the S217. Most notably, the soundbar seemed to be lacking when it came to centering our sound, and we noticed this the most when demoing a video game. While the S217 did a good job at balancing our game’s soundtrack and environmental sounds, the lion’s share of the audio was pinged to the sides of the S217, with little to no emphasis on the faux center-stage experience we were treated to with El Camino.

This absence of front-facing sound was also notable in a few other movies, TV shows, and games, and even the S217’s dialogue emphasis setting did little to rectify things.

We also had some trouble with HDMI eARC. We’re not sure if the issue was on the soundbar or TV end of the hookup, but whenever we would turn off the TV, the soundbar would shut off, too (as it should have), only to turn back on and remain powered about 10 seconds later. And while it takes nothing to simply power the S217 down with its remote or power button, it’s still an inconvenience when HDMI CEC is supposed to do all the work.

We also went into our review knowing the S217 lacked Wi-Fi capabilities and voice assistant support, but it was still a bit of a bummer to have both features missing from the overall package.

The Verdict: The Denon DHT-S217 is a Solid Entry-Level Atmos Soundbar

Unless you’re spending thousands of dollars on a full Atmos speaker array, or a similarly-priced flagship soundbar, it’s going to be tough to hammer home that iconic Atmos sound. But in terms of budget-priced gear, the Denon DHT-S217 does a fantastic job at treading Atmos waters, albeit in the shallow end of the home theater swimming pool.

Wireless Soundbars Raise Your TV’s Audio Game Without the Mess